My favorite plant this week is a weed?

Last week, I shared photos of a bed I'd recently replanted.  Although the focus of that post was on my newest Australian plant introductions, another plant, Hibiscus trionum, vied for attention by flashing its flowers. 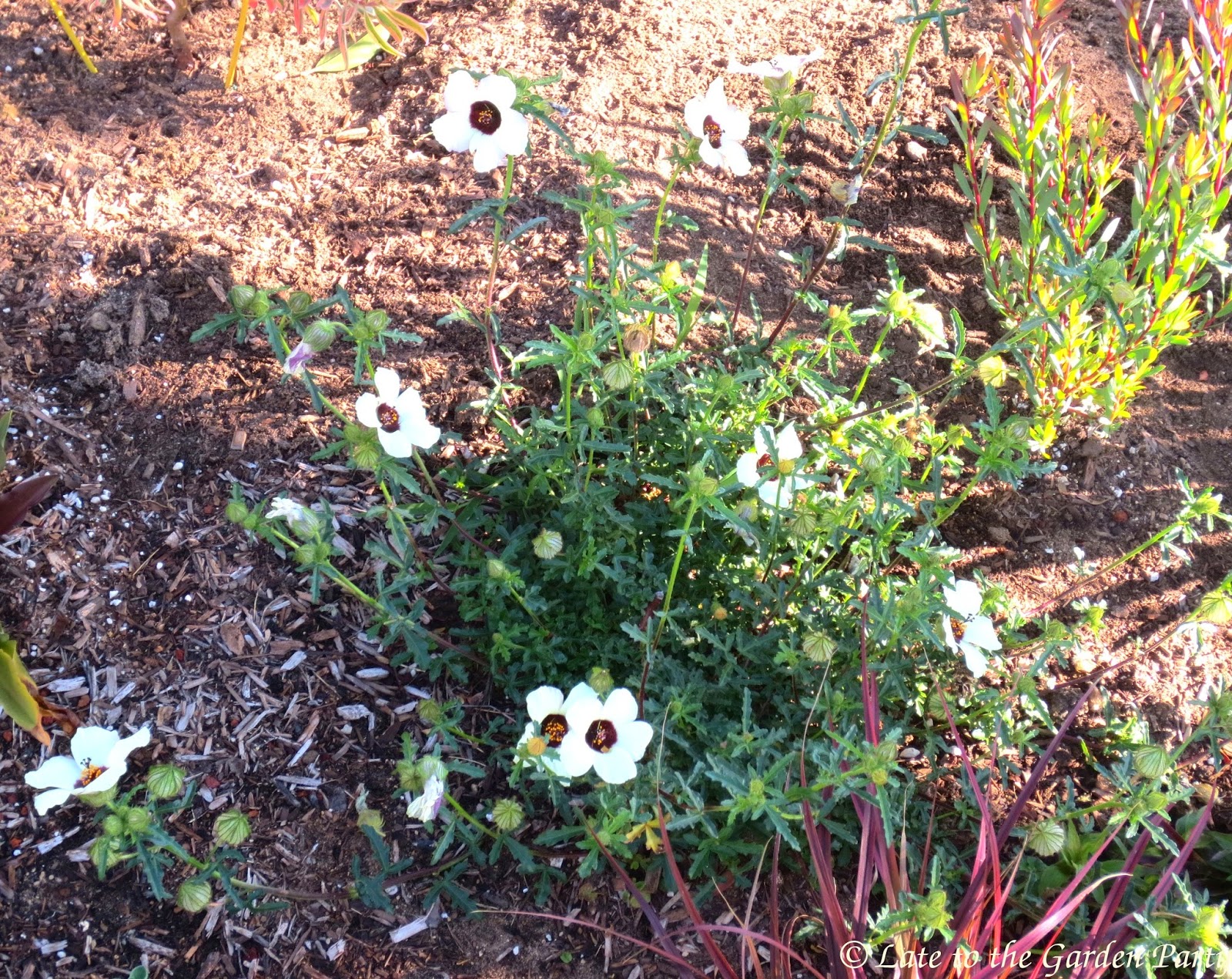 The flowers last only a day but they're very pretty, featuring cream-colored petals and deep burgundy centers.  The question I face is: is it a lovely wildflower or a noxious weed? 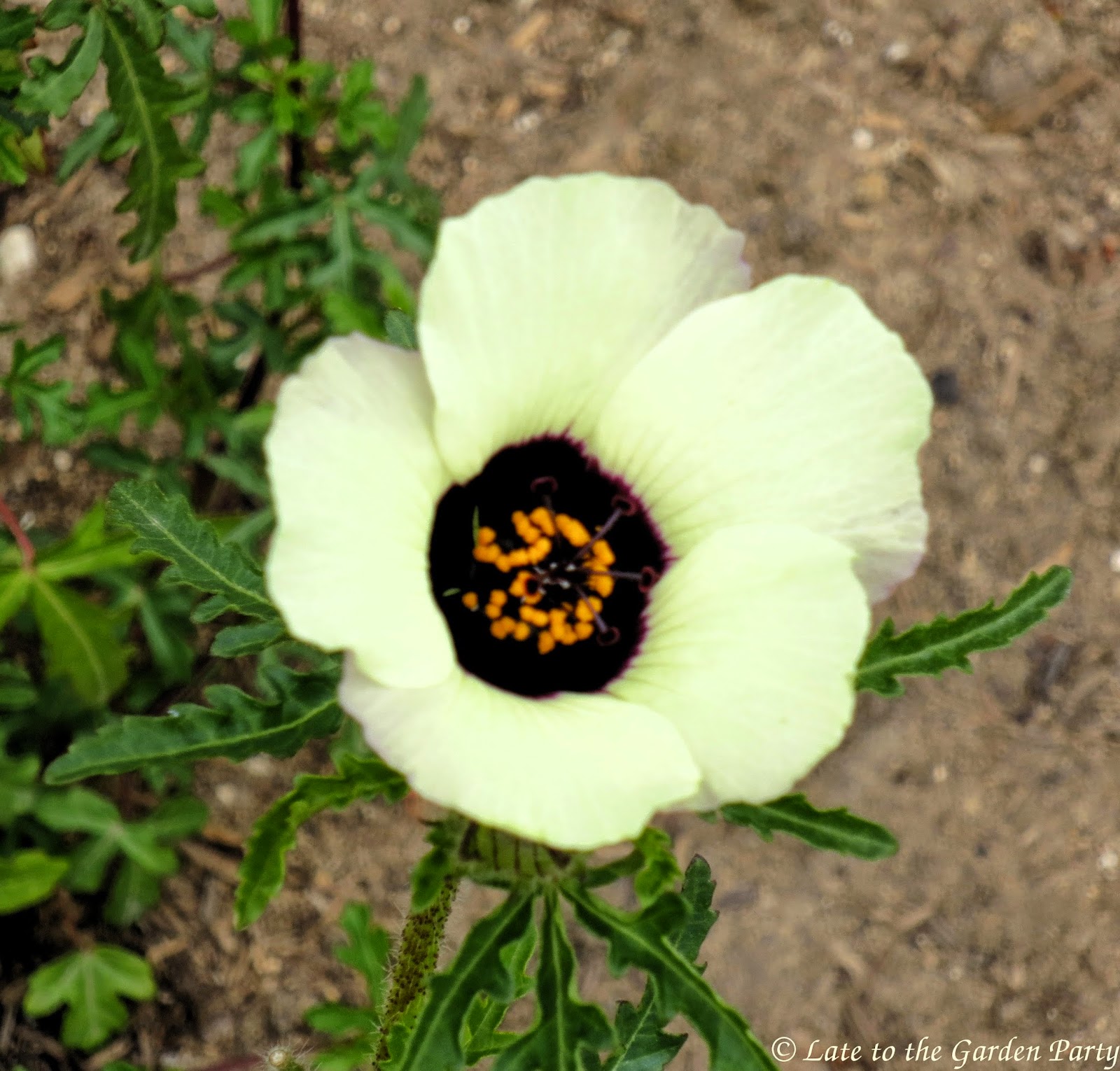 I've had mixed feelings about this plant since I purchased it, on the fly, last March.  I found it at my local botanic garden.  I was familiar with the large-flowered shrub Hibiscus but not this species.  I grabbed it up, not knowing what I was getting but reassured that anything offered for sale by the botanic garden must have the garden's stamp of approval.  Then I looked up the plant on-line.  The gardening community is divided on the subject of Hibiscus trionum, also known as flower-of-an-hour, bladder weed, modesty, shofly, and Venice mallow.  It's native to the Eastern Mediterranean and was introduced as an ornamental in the US but has naturalized as a weed in many areas.

While Fine Gardening described it as a "perfect filler" plant, the opinions expressed by posters on Dave's Garden illustrate a range of strong opinions.  Here are a few quotes from the critics:


Even after reading the warnings, I haven't been able to bring myself to pull it out.  It has attractive, spreading foliage, which forms a mass 1-3 feet (30-90 cm) tall and wide. 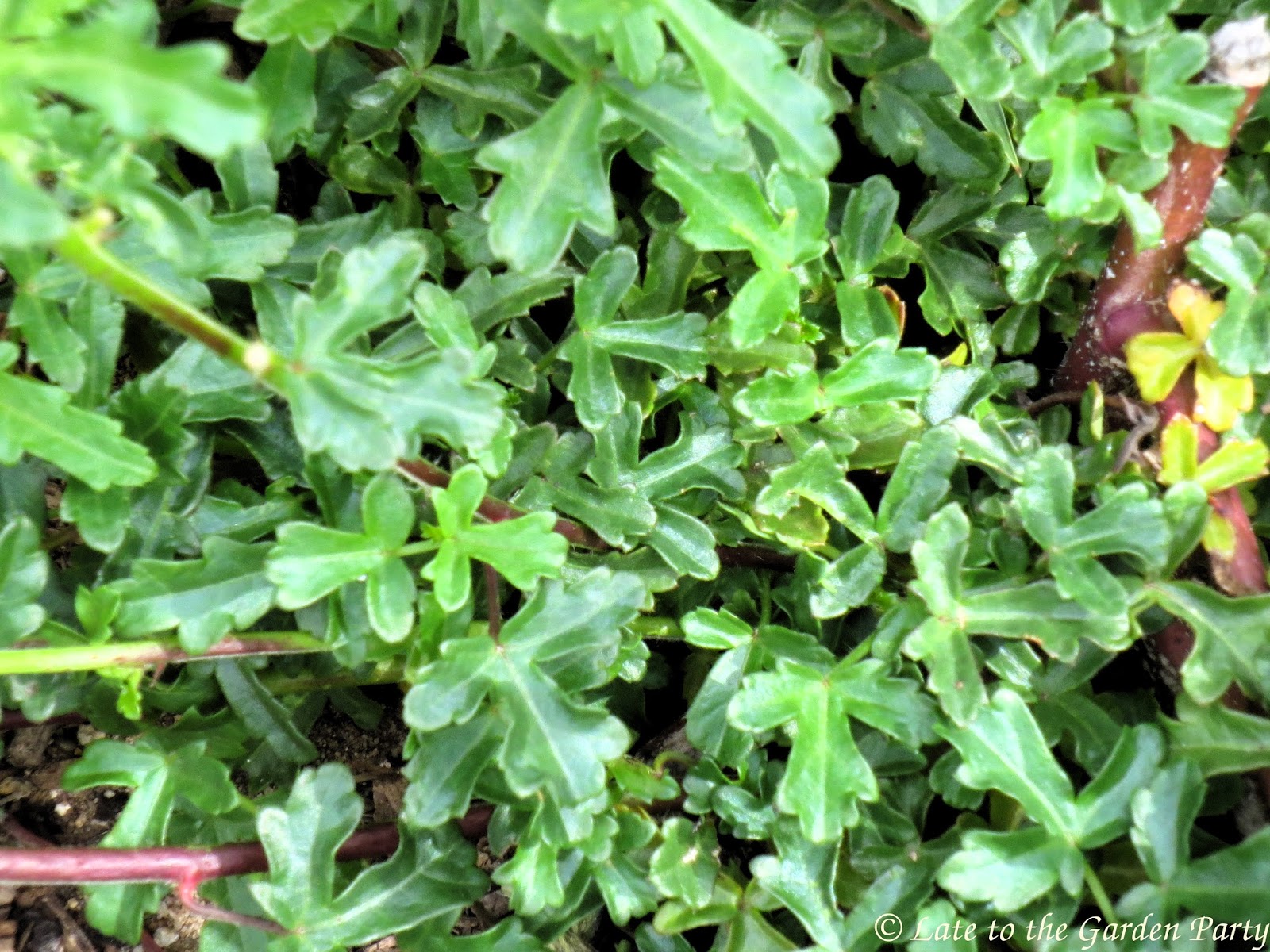 The flowers last only a day but it blooms profusely from early summer through fall.  Mine was already blooming sporadically in March and has continued to do so, with heavier bloom following our recent spot of rain.  The flowers open when the sun comes out.  While some commentators contend that the flowers remain open only a short while, those on my plant appear to remain in bloom until the bed retreats into full shade in the late afternoon. 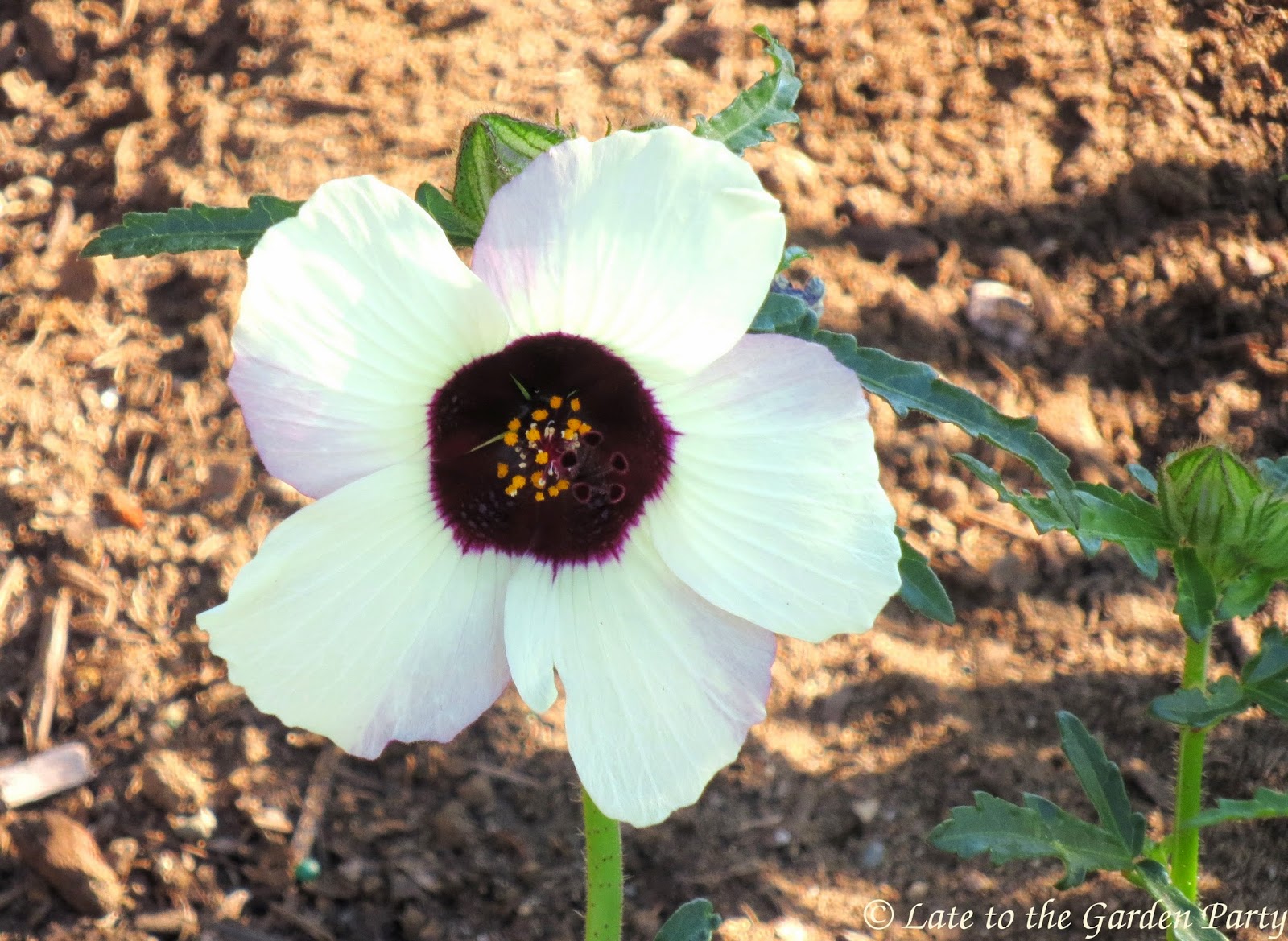 The plant prefers moist, well-drained soil.  Under our dry conditions, I hope the plant will remain under control.  It's obvious that it will self-sow freely.  Each spent bloom opens to reveal seeds, which can reportedly survive for years, waiting for the right conditions to germinate.


So what differentiates a weed from a flower?  I think it's in the eye of the beholder.  Many years ago my stepfather gave me a stitchery piece he'd made with me in mind, which I still have.  Maybe he saw me as a weed sympathizer even then. 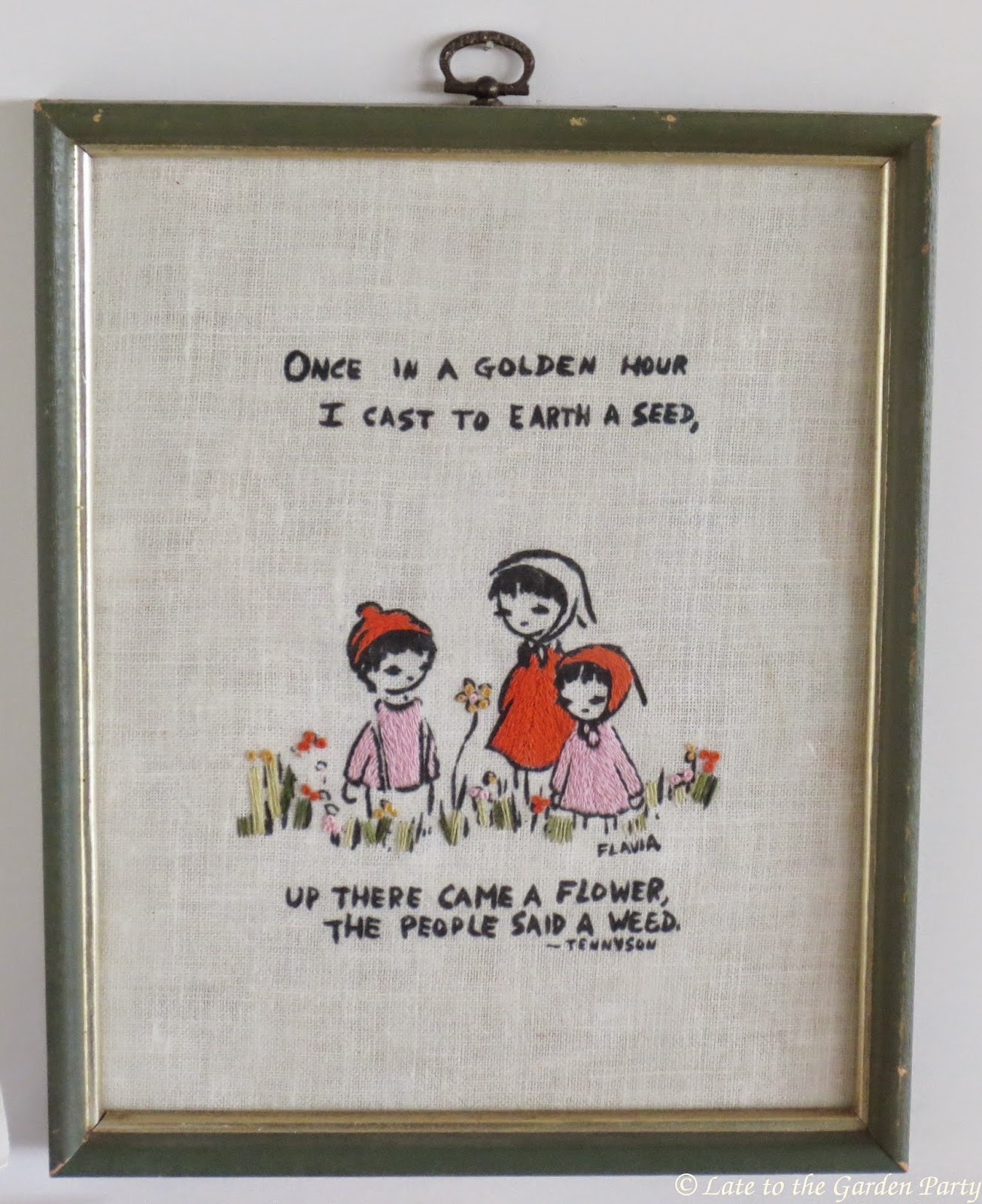 There are many plants I consider weeds in my garden, some of which I tolerate in small quantities, like Centranthus ruber, Geranium incanum, and Erigeron karvinskianus.  Others, like the seedlings of Albizia julibrissin, I pull out at first sight, wherever I find them lurking.


The weed-suspect Hibiscus trionum, is my contribution to the favorite plant of the week meme hosted by Loree of danger garden.  Whether it stays a favorite remains to be seen.  Behavior will tell.  Please visit Loree to see her favorite this week (which is definitely NOT a weed).

Posted by Kris Peterson at 1:16 PM