In a Vase on Monday: Flowers are in short supply

My flower supply is greatly diminished but I resisted falling back on my Grevilleas this week.  The Camellias are still plentiful but they shatter easily, especially when the air is as dry as it's been of late.  As I wandered my garden, I focused on foliage plants and looked for the odd flowers that might serve as accents.  One arrangement turned out better than I'd expected but the second was so disappointing I was tempted to throw the whole thing in the trash.

The first arrangement started with Leucadendron 'Safari Sunset', which has colorful bracts that look almost like flowers.

While I like each of the individual components of the second arrangement, they just didn't come together well.

The Anemones in my cutting garden have sprouted foliage and the Ranunculus are just beginning to follow suit.  I planted plugs of foxgloves and snapdragons a month ago too.  However, nothing is anywhere near bloom stage yet.   In the void, succulents may make an appearance in my December IAVOM posts - or perhaps my arrangements will shrink to tiny dimensions for a time.  We'll see.

For a look at what other IAVOM contributors have come up with this week, visit our host, Cathy in Rambling in the Garden.

I've stayed close to home for the past week, taking advantage of comfortable temperatures to tackle several small garden projects.  The project with the biggest impact involved harvesting a large agave "pup" from one section of my garden to fill a vacancy in another.  It remains very dry here and the prospects for rain in Southern California aren't especially favorable.  Although one expert says he remains "optimistic" that it won't be quite as dry as last year, it's not likely we'll see normal* rainfall either.  Given that scenario, it seems reasonable to introduce more succulents.

The mid-section of my backyard border is still fairly bare since I removed several dead and dying shrubs.  I planted a Grevillea 'Pink Midget' I purchased at a Santa Barbara garden center in early October in one spot, only to watch it die in record time.  The spot in question is particularly dry so I decided an agave might be a better choice.  I didn't want a puny specimen that would take years to make a statement and, as good-sized plants generally come with hefty price tags, I decided to shop my own garden.  Agave 'Blue Flame' is a prolific pupper and needs regular pruning to remain manageable so it was an obvious choice.

In addition to taking out one large (and very heavy) 'Blue Flame' pup, I removed a clump of Euphorbia tirucalli 'Sticks on Fire' that was encroaching on the largest Agave 'Blue Glow' plus a small Aloe dorotheae 'Sunset' that had been half-buried under the 'Blue Flame'.
I also replanted a small area next to the dining room window.
The Salvia discolor I picked up a couple of weeks ago also found a home.
When I noticed that I'd let the Mexican feathergrass (Nassella tenuissima) get out of control in the border fronting the back hedge, I tackled that too.
In between these various tasks, I planted two flats of creeping thyme (Thymus serpyllum 'Elfin') to fill in along the flagstone path that bisects the back garden and collected leaves from the deciduous persimmon, ornamental pear, Japanese maple, and Ginkgo trees, running them through my old Black & Decker Leaf Hog to shred them before dumping them in the compost bin.
This morning, our tree service will arrive to trim ten trees and one cherry laurel hedge.  They're always careful but there's inevitably some collateral damage so cleaning that up will be my focus this weekend before I shift my attention to the holidays.  Can you believe it's almost December?  I can't!
*"Normal" (average) annual rainfall for Los Angeles County is 16 inches, most if not all of which falls during the fall and winter months.  Rain in our location of SoCal totaled only 4.12 inches in the October 1, 2020-September 30, 2021 "water year."

Early this year, when word of a salmonella outbreak among song birds spread, I stopped filling my bird feeders.  After the risk dropped, I held off on filling the feeders as I hosted periodic gatherings with friends in my back garden  - fewer birds in the vicinity reduced the frequency with which I had to scrub my outdoor furniture.  Even as my friends and I got vaccinated against COVID-19 and returned to a semi-normal schedule of meeting at local restaurants, I held off refilling the feeders.  But I've felt guilty every time I looked out my home office window and saw a bird land on the empty feeders.  As Thanksgiving loomed, I decided there was no better time to scrub the feeders and get back to feeding the birds.  It only took a day before they were back.

Of course the finches and jays the weren't the only creatures to return.

I have three feeders in the front garden too but they've barely been touched thus far.

Meanwhile, as I pondered when I should cut back the Senna bicapsularis on the north side of the garden, I spotted caterpillars of the cloudless sulphur butterflies (Phoebe sennae) munching away for the first time this year.  Pruning will be delayed for at least a couple of months.

Hopefully, offering the birds plenty of seed will discourage them from eating caterpillars!

Best wishes for a wonderful Thanksgiving!

In a Vase On Monday: Warm & Cool

The title of this post could reflect our weather, which continues to flip-flop between warm and cool temperatures, but instead it refers to the colors of the two arrangements I have to offer this week. The warm arrangement befits the upcoming US Thanksgiving holiday.

The bush violets are still going strong so cool blues are making an appearance once again this week.  The arrangement could have used more white flowers but those are sparse at the moment and I couldn't bring myself to cut all I had.

For more IAVOM creations, visit our host, Cathy at Rambling in the Garden.  Best wishes to all of you in the US celebrating Thanksgiving this week.  Enjoy the day! 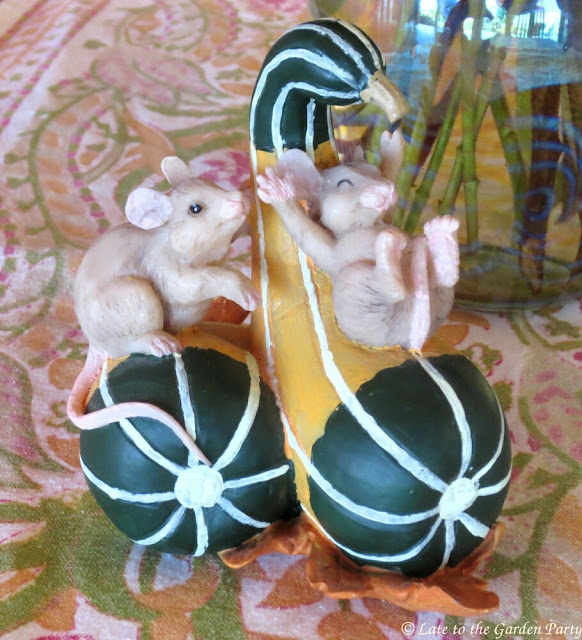 Temperatures have gone up and down this fall but, despite periodic blasts of summer-like heat, we have some touches of fall foliage color.  It's nothing like what the northeastern part of the country has to offer but we appreciate what we get nonetheless.  Evergreen plants are more common in my climate than deciduous ones but we also don't get cold enough to allow the deciduous plants we do have to color up.  Freezes are a freak occurrence here - I haven't experienced one in the 10+ years we've been in our current home.  Just for fun, I ran an online search to see if I could find evidence of any freezes in my general area in the recent past.  I found an article (complete with photos) pointing to snowfall in 1949, which you can find here.

The neighbors across the street get more color than we do but their trees are off to a late start this year.
I may have little in the way of the golden yellows, oranges and reds that signal fall for most people but many of the drought tolerant plants in my garden glow in a different way.  I'll close by offering a few examples.

After nearly a week of summer-like temperatures, our marine layer returned on Tuesday morning, enveloping the garden in fog.  As is usually the case with fog, it seemed as though sounds were muted, which an online search reassured me isn't a figment of my imagination.  The harbor below us usually produces a steady hum, punctuated with periodic booms.  We've become so used to that hum we're hardly aware of it consciously - until it stops.  It may be that activity in the harbor stops or slows in response to dense fog but it may also be that my attention, visual and auditory, shifts to the space immediately surrounding me, no longer tracking activity I can't visually pinpoint.

Here's a spin around my garden in the fog with the sound (and narration) turned off. 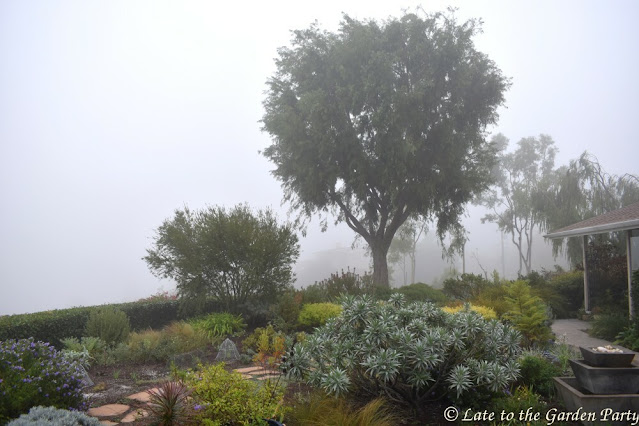 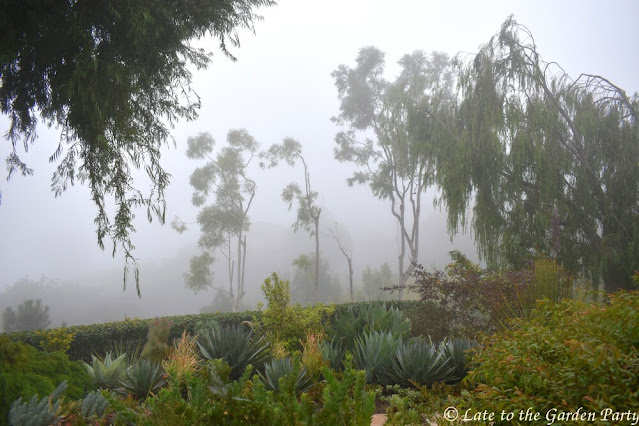 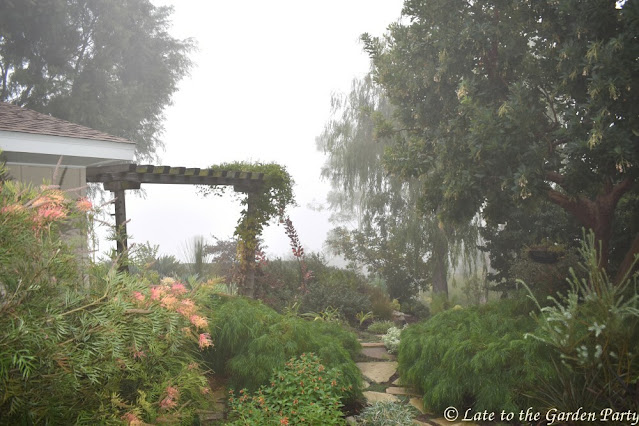 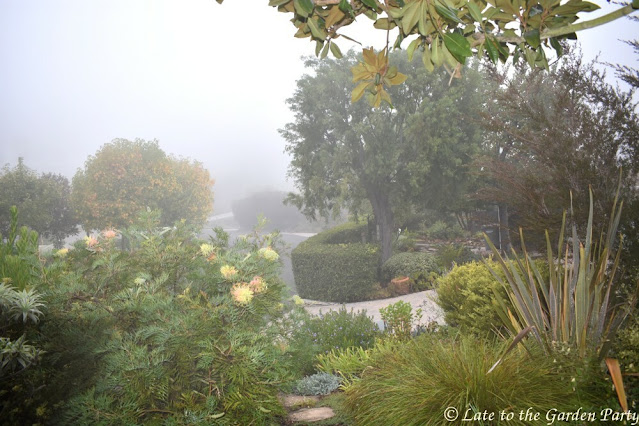 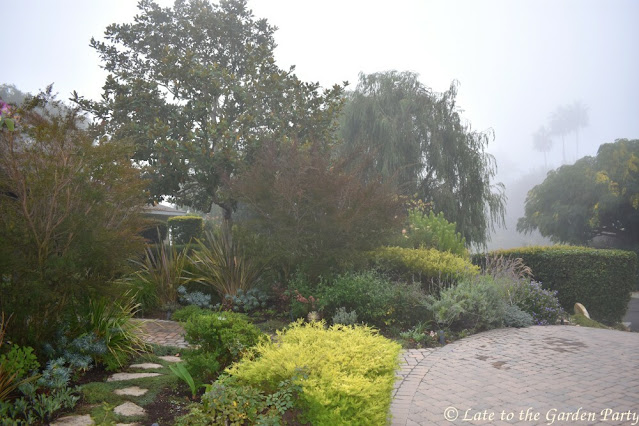 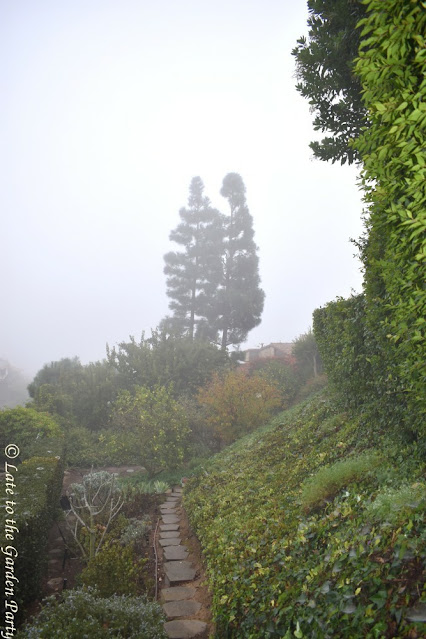 Enjoy a peaceful day, with any annoying chatter turned off.