In a Vase on Monday: Not a lot of choices

Although many of the dahlias in my cutting garden have buds, they're still taking their time to develop into blooms.  Dahlia 'Gitt's Crazy' was close but I decided it wasn't quite ready.  Meanwhile, many of the plants elsewhere in my garden shut down as temperatures rose into the low 90sF last week.  Overall, by comparison to most summers, things haven't been bad along the Southern California coast this year (although the inland areas haven't been as lucky).  We haven't even hit 100F (37.8C), much less had one of the more severe heatwaves that have become common in recent years.  We're still miserably dry and water restrictions are a looming issue but, as we don't usually get rain during summer months, we can't anticipate any changes on that score until late fall or winter.  And by comparison with Northern California and other areas of the Western US experiencing persistent wildfires and areas of the Southeast US currently facing Hurricane Ida, I know we're fortunate.
Dahlia 'Akita' produced one dramatic bloom this week, which I found I couldn't ignore even though it was already past its peak.  My challenge was to put a different spin on the arrangement so it didn't look like a replay of the one I created two weeks ago.

Several of my seed-sown sunflowers finally bloomed last week so I cut two stems, combining them with the native aster that's slowly burning out in my back garden.

For more IAVOM creations, visit Cathy at Rambling in the Garden.  Best wishes to all in the vicinity of Hurricane Ida's path this week.

Boogying at the botanic garden

In July, South Coast Botanic Garden partnered with Constellation Immersive to open The DiscOasis on the garden's grounds.  Frankly, rollerskating to disco music during a surge in COVID-19 cases due to the Delta variant didn't much appeal to me but, after reading a recent article about it in the Los Angeles Times, I decided to pop by to take a look at the set-up.  If you're interested, I'm sorry to report that this is the event's last week and, according to the official website, it's sold out through the weekend.

For some reason, I'd assumed the skating rink would be set up near the front entrance.

It wasn't anywhere to be seen in the front garden so I started walking.  I'd checked off most of the sculptures on display as part of the garden's Hide & Seek - Art Meets Nature exhibit by the time I ran into the entrance to The DiscOasis.  I was almost surprised I found it at all.  SCBG is 87 acres in size and the event was set up in the "back 40."

As the entrance to the tunnel was blocked I wasn't sure I was going to see anything more but then I ran into what were clearly set-ups for taking pictures, part of the "immersive experience" if you check out videos of the event online.  (Here's one.) 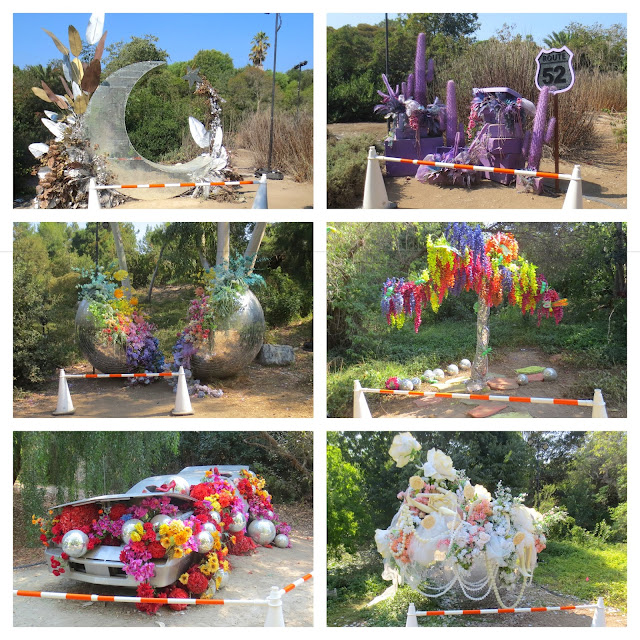 After the last of these I reached the entrance to the midway. 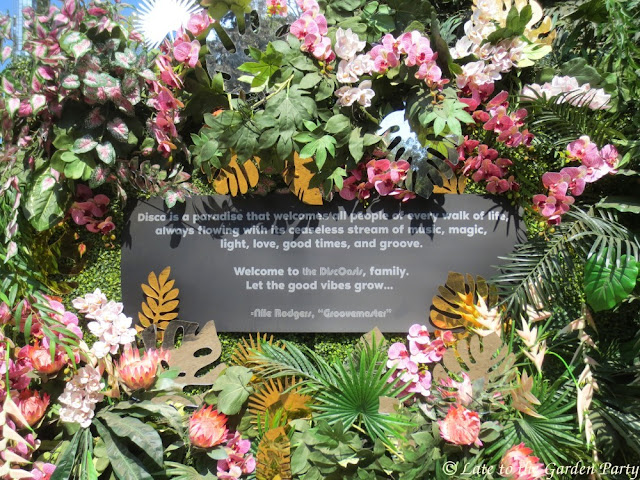 Unable to get any closer, I decided to make my way back to the front of the garden.


From there I had a good walk back to the garden's front entrance and headed home.  The tropical butterfly exhibit (SOAR) closed last month and, with the closure of The DiscOasis this week, the garden's next event will celebrate monarch butterflies, which is more up my alley.  That event opens in October.  Given that SCBG felt comfortable enough to open to the public on this scale for The DiscOasis, I'm hoping this will make them more amenable to supporting plant sales and other events appealing to gardeners and naturalists in the near future.

Some years ago, Alison of Bonney Lassie called on garden bloggers to fess up about the messes in their gardens.  She presented her own in posts entitled "Tell the Truth Tuesday."  In midsummer, in an especially dry year, I have plenty in my garden to which I'd like to turn a blind eye, the window boxes attached to my lath house among them.

Here's what they looked like last week after I pulled out the dead plants:

Tempting as it was to add fluffy flowering plants, with water at a premium in drought-stricken California, I thought I should use something that doesn't need water two or more times a week to survive the heat in a small box.  Our last water bill shook me up as the total expense was much higher than I'd expected.  My husband dug below the total to determine that, while our usage this period somewhat exceeded that we used over the same period last year, it was on par with what we used in July 2020.  That said, the cost of the same amount of water is now nearly twice what it was last year.  While I feel slightly better to learn that I hadn't actually gone completely overboard with my water use, it still has me thinking twice about what I plant.

So here are my replanted window boxes:

Here's what I used:

I'm guessing that more and more succulents are going to creep into my garden in the coming year as our water challenges continue.  Last week the federal government issued the first restrictions on use of water from the Colorado River.  Arizona farmers will be the first group directly impacted but this will effect Southern California all too soon if drought conditions continue.

In a Vase on Monday: Dark & Dramatic or Light & Bright?

I did a lot of aimless wandering in my garden Sunday morning, undecided about what to cut to put into a vase this week.  Somewhat to my own surprise (if not perhaps those of you who are regular visitors), I ended up with three very different arrangements.

The first features a bloom of what I bought as a Dahlia 'Penhill Dark Monarch' tuber, which it almost certainly is not.  'Dark Monarch' is supposed to be a mix of deep pink and plum with a hint of cream (as you can see here).  Instead, my flower is very red, with a base color similar to that of the Dahlia 'Akita' I featured last week but with a very different form.  It doesn't bear a resemblance to any of the dahlias I ordered as tubers.

My native aster is in full flower, although many of the flower stalks are scorched.  I'm itching to start digging it up, which is going to be a massive task as its rhizomes have spread through a large portion of one border; however, I won't start that until cooler temperatures are in the long-term forecast.  In the meantime, I expect I'll be using the presentable stems a few more times if I can manage not to repeat myself too often.

I currently have a plethora of Zinnia 'Queen Lime Orange' flowers in my cutting garden.  I cut cut them to encourage the stems to branch, accenting them with some of the old standbys from elsewhere in the garden.

Do you have a favorite?  For more IAVOM creations, visit Cathy in Rambling in the Garden.

The garden and I reach a low point in August.  Even in good years (namely, those with decent rainfall), the garden looks badly stressed by this time of year.  I usually spend a lot of time dispensing emergency rations of water but this year, with virtually the entire State of California in severe drought, I think twice before administering any aid.  I gave the lemon tree at the bottom of our slope, which I suspect has been in place for 25 or more years, a good soak last Saturday when my husband (who usually pays no attention to plants) expressed concern that it was dying.  Two days ago, I accepted the fact that my favorite Correa, 'Sister Dawn', planted in 2018, was dead.  Large sections of creeping thyme in various areas have died out.  I could go on.  Wishing to avoid the bleak newscasts for at least awhile, I decided to see what I could accomplish in the garden to put a positive spin on its appearance.

Rather than tackle one of the areas that looks really bad, I decided to start with an area that looks relatively good.  My hope was that, with a little work, it could look even better.

My first objective was to remove the Cistus 'Victor Reiter' I'd planted from a 4-inch pot in 2016.  It grew taller than I'd envisioned and didn't get enough sun to bloom well, and of course it was blocking the view of my oldest Agave ovatifolia.  I thought of relocating it but I didn't have an immediate placement in mind so I took cuttings instead.

Other than periodically getting poked by the nearby agaves, the Cistus came out with relative ease.  Agave ovatifolia regained its rightful place as a focal point. 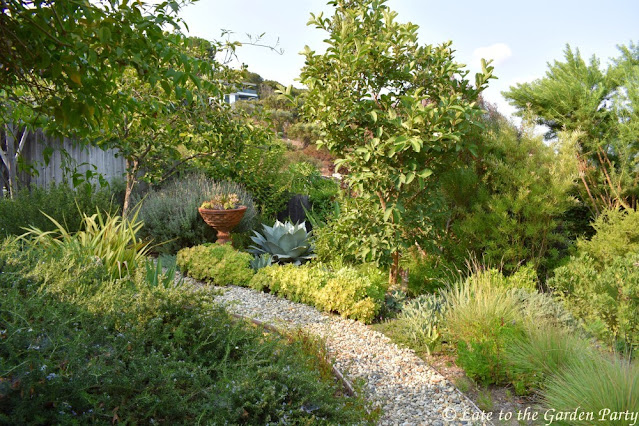 There's now an empty space in front of the agave that needs to be filled.  There are half a dozen agave pups I can't identify there but I'll probably pot them up to give away as they're too small to have any impact.  I noticed I have grass seedlings in another section of this area so I may transplant one or two of those here.

After a midday break, I tackled cleanup of the area behind the Agave ovatifolia.  In addition to pulling weeds, I trimmed back rosemary and lightly pruned both the 'Hachiya' persimmon tree (currently laden with fruit) and Coprosma repens 'Plum Hussey'.

I pulled out a lot of self-seeded Dorycnium hirsutum (aka Hairy Canary Clover), potting up one viable seedling to fill an empty space where another clover died last year.

Dorycnium is a lovely plant in and out of bloom but it's a rampant self-seeder and a vigorous spreader.  I cut back some of the plants swamping other plants during my cleanup operation as well.

The ivy growing into the area from the back slope needs to be cut back as well but that's a job for another time.  At least the day's cleanup effort left me in a more positive frame of mind.  I can't solve climate change or the world's other problems but at least I can accomplish little things that improve the appearance of my garden.  Best wishes for a pleasant weekend.