This week, the Metropolitan Water District  of Southern California (MWD) announced that, effective June 1st, it will limit outside irrigation to once a week in large sections of its service area.  The action affects six million people in portions of Los Angeles, San Bernardino, and Ventura Counties.  Due to historically low reservoir levels and a shrunken snowpack state water officials have dramatically reduced the amount of water the State Water Project will provide to the MWD.  The goal is to cut water use by 35%.  Failure to reach that goal could result in further water restrictions.

My own area is not part of the MWD.  Under the latest guidelines issued by our water company, we're restricted to irrigating outdoor areas two days a week on a prescribed schedule.  Hand-watering is permitted outside that schedule subject to additional requirements.  I've limited irrigation to twice a week since former Governor Brown first implemented drought-related restrictions in 2015 so the new rules don't represent a material change for me at present; however, I've no illusions about the likelihood that we'll be impacted to a greater extent in the future.

Outside of my small cutting garden, I use mostly drought-tolerant plants but it's questionable whether all of them could get by on once a week irrigation regimen given our increasingly pathetic rainfall (7.9 inches or 200 mm since the start of the current "water year" on October 1, 2021).  I've been steadily increasing the proportion of my garden planted in succulents and I'm anticipating that this trend will continue.

Lucky for me then that the South Coast Cactus & Succulent Society (SCC&SS) held its annual show and sale last weekend.  Having missed the show during the last two years of the pandemic, I made a point of attending.

The space wasn't as large as that provided by the hall at the South Coast Botanic Garden previously used by the SCC&SS as a venue for these events but it was far sleeker.  There were fewer vendors by my assessment but still plenty of choices in terms of plants.

I focused most my attention on the show plants (not for sale).   There were fewer show tables on this occasion but whether that was due to the event's smaller space or the pandemic's impact on the show's contributors, I can't say.  Here's a summary showing each of the 4 show tables and the specimens that drew my attention:

Of course, I didn't leave empty-handed but, as I parked a distance away because the parking lot was full when I arrived, I restricted my purchases to items I could easily carry.

That's it for me this week.  Best wishes for pleasant weather and a fruitful weekend in the garden.

Wednesday Vignette: Learning to live together

Spring brings color, wonder and joy into our lives but, in my area, it's also known to bring an increase in coyote activity.  Coyotes breed in January through March and their pups are generally born in April and May.  With more mouths to feed, adult coyotes become more visible, aggressive and territorial.

Along with thefts of catalytic converters, notice of coyote sightings are among the most prevalent topics on community social media posts.  Last week, in an effort to get ahead of what's become a very emotional issue, our city sent a large, glossy, 4-page bulletin to all residents in an effort to educate them about how to deal with coyotes safely and effectively.

I saw my first coyotes up close when I was in graduate school, living in Santa Monica.  A neighbor and I walked in the early morning before she left for work but on one occasion she wasn't feeling well so I took off by myself.  Strolling through a neighborhood of expensive homes several blocks from my apartment, I noticed a woman in a skirt and heels running down the opposite side of the street with her dog on a leash.  A minute or two later, I noticed three dogs off-leash.  My first thought was that it was interesting that they all looked alike.  A second later, I realized that the "dogs" headed my way were coyotes.  I didn't run but I turned the corner and walked briskly in another direction.

When my husband and I moved to a different, densely-populated beach city several years later, I heard stories of coyote sightings but I never actually saw one.  When we were in the process of buying our current house in a semi-rural area, I asked the real estate agent representing the seller if there were coyotes in the area.  He downplayed the concern.  I didn't see any coyotes for the first 5 years here but I did hear them at night sometimes.  Then I began spotting them now and again during the daylight hours, and neighbors began complaining about their "extended" hunting schedules.  I recall seeing a young coyote trotting down the street while being dive-bombed by a pair of crows.  That incident had a comical element, as did an episode in 2018 we caught on our home security cameras.

Not long afterwards, neighbors reported that their dog was snatched right in front of them.  Then our next door neighbor lost her Pomeranian to a coyote that apparently jumped over her backyard fence.  My cats had never been allowed to roam on their own but I did give them a little supervised time outside each morning.  That came to an abrupt end in 2020.

Pipig has been confined to the house and her screened "catio" ever since.  I even had my husband reinforce the bottom section of the catio to provide additional protection.

The city prohibits feeding coyotes, which seems obvious but I remember one elderly neighbor who'd made a practice of doing that in the mistaken belief that it would keep the coyotes from eating the stray cats she cared for.  The city's bulletin provides a range of other recommendations to deter coyotes. 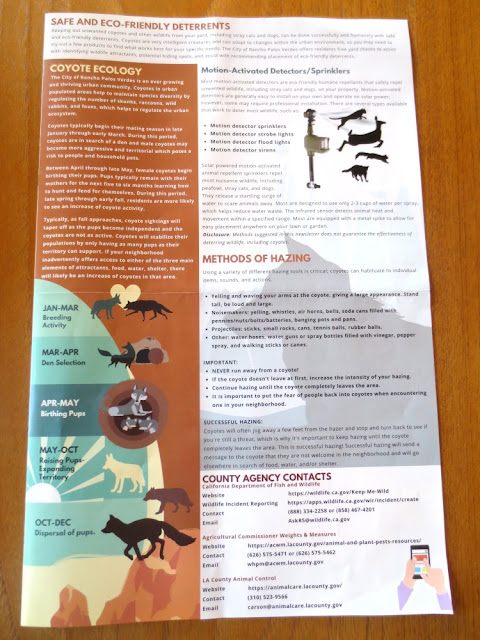 Some of the key recommendations include:

I'm not especially worried about the coyote "threat" myself but I'm concerned every time I see someone's pet cat or dog running loose through the neighborhood.  Coyotes and other local predators (raccoons, possums and foxes) have been here longer than humans have.  We need to respect their way of life while protecting the domestic animals we share our lives with by taking appropriate precautions.

In a Vase on Monday: Another take on orange and blue

Remarkably, we got a touch of rain late last week.  It wasn't much, just 0.18/inch (4.6mm) but, as I expected nothing, it was appreciated.  In what appears to be an unfortunate pattern, the low pressure system that permitted the rainstorm in the north to move into the south part of our state was quickly replaced by another round of Santa Ana winds and soaring temperatures.  We briefly hit 87F (30C) yesterday and today could be warmer still.  The winds can quickly wither flowers so on Sunday I cut blooms with relative abandon for In a Vase on Monday, the weekly meme hosted by Cathy of Rambling in the Garden.

The rain spurred another flush of blooms on the snapdragons in my cutting garden, inspiring my first arrangement.  Thus far, the snapdragons are free of rust so I want to take advantage of them while I can.

The first bearded Iris to bloom in my back garden prompted my second arrangement, although I admit I agonized awhile about cutting it.  It looked beautiful on Friday following our brief rainstorm but Saturday's vicious wind did it no favors and I was afraid that the blooms currently in bud would suffer if I left it alone so, without thinking about it too long, I cut the stem and moved on.

For more IAVOM creations, check in with Cathy at Rambling in the Garden. 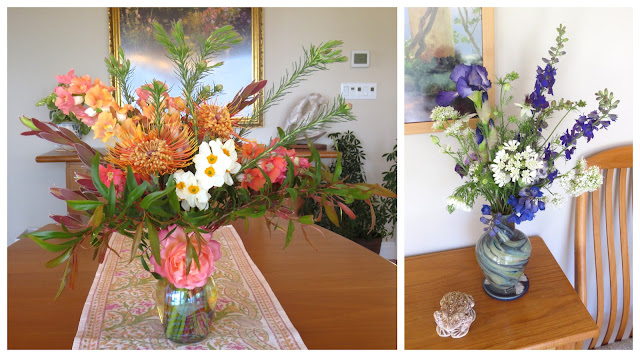 A friend and I paid a visit to Sherman Library & Gardens last week.  I've been there many times but this was my friend's first visit.  Located in Corona del Mar, it's very small as botanic gardens go, just over two acres in size.  It's set in the middle of a very lively business district along the Pacific Coast Highway, close to the Newport Beach Civic Center.  Even through small, it packs a punch as it's beautifully maintained.  Areas are redesigned on a regular basis so there's almost always something new to see.

We entered via the back parking lot into the Central Garden.

We followed a zig-zag path through the garden, moving to the Succulent Garden next but you can get a better sense of the garden's overall layout by referring to its online interactive map, which you can find here.

We emerged from the Succulent Garden into the Tea Garden.  An outdoor class was in session so we skirted around the edges of the area.  My friend was attracted to a colorful shrub under a shade structure.

After checking out the plants for sale outside the gift shop, vowing to go back there before we left, we toured the Specimen Shade Garden.

We stopped by the Mediterranean Climate Garden next.

We spent a good amount of time in the Tropical Conservatory, one of my favorite spots.

As we headed back in the direction of the gift shop, we checked out the Formal Garden and the Sun Garden.

I hadn't planned on buying any plants but I couldn't help myself.

We had a nice lunch on the patio of a nearby restaurant and made a relatively brief stop (by my standards) at Roger's Garden, one of my favorite garden centers, before heading home.  On a weekday, it's best to get on the freeway before 3pm to avoid getting mired in Southern California's notoriously heavy traffic.