I'm once again joining Loree of danger garden in identifying the plants that earned my favor this month.  The exercise, which has me making the rounds of my garden to see what's doing well, is always useful in providing perspective.  This time, it also led to the discovery that my adversaries, the raccoons, had made their own extensive examination of my garden, in the process of which, among other things, I discovered that they'd dug up some of the bulbs I'd planted only days ago.  But they also left me empty snail shells here and there so I'm trying to see the yin and the yang of my relationship with them.  Everything's been tidied up again and, hopefully, they'll employ their skills elsewhere for a time and give me a break.

On to this month's favorites!


That's it for this month's favorites.  Visit Loree at danger garden to find her picks.  And, if you'd like to see what's looking good across the pond right now, visit Chloris at The Blooming Garden.

I haven't been happy with the succulent bed I created in front of our garage since I finished it in March 2016.  After removing all the lawn in that area, we laid a flagstone walk; my husband created a trash path using railroad ties and gravel; and I planted the largest beds with shrubs and perennials, using succulents to fill the remaining bed on the north side of the trash path.  But, as I'd spend most of my budget on shrubs and perennials, I made do with inexpensive (small) plants and cuttings from friends and my own garden to fill the new succulent bed, throwing in some grasses, lavender and bearded Iris in a vain attempt to fill the space.  (You can view the original planting plan here.)

I decided to renovate the succulent bed several months ago but waited until temperatures began to cool to tackle the project.  I got started in mid-September.  Did I take a before shot?  Of course not, although I assumed that I'd find one among the wide shots I routinely take of the garden.  However, the most recent photo featuring this bed I located dated back to early May, which probably speaks to my tendency to ignore the bed once I'd decided to renovate it.

My first task was to open the space up to give me more of a clean slate to work with.  I left the large Agave attenuata inherited with the garden in place, as well as many of the succulents edging the path but tossed most of the perennials and many of the smaller succulents that had been slow to bulk up.  The larger succulents I wanted to keep were placed in pots until I could decide how to use them in the renovated bed.  I also appropriated plants from pots and other areas of the garden.  And I went shopping.

Then I hauled in topsoil and dug in cactus mix to create berms and improve drainage.


Next, I enlisted my husband's help to pick up another load of rock to shore up my berms.

Once I'd replanted the area, I struggled with whether or not to add gravel around the plants.  While gravel adds a finished look as the plants fill out, it also makes it more difficult to make changes to the bed as the gravel works its way into the soil.  I elected to fill in with ground cover succulents, mainly Sedum makoni 'Ogon' and 'Limelight', even though those too will need time to fill out.  I still need to add more ground cover material but the area in front of the Arbutus 'Marina' and the Agave attenuata is mostly done.  Here are views of the newly planted area from different angles:

If I enumerated the plant species, the list would be very long but here are some of the larger specimens:

In addition to filling in between plants with more ground cover plugs, I'm planning to lay another flagstone path behind the Arbutus leading to the shrubs in the corner so these can be reached for trimming without treading on my succulents.  On either side of that path, I plan to add more succulents, bromeliads and grasses.  Some of these are already in place but those displays aren't ready for prime time yet and it'll be awhile before I'll ask my husband to make yet another trip to the rock yard to get more flagstone.

Next up is bulb planting.  What about you?  Do you have any fall projects in the works?

Unlike gardeners in cold winter climates, Southern California gardeners generally welcome autumn, which is frequently referred to here as our second spring.  Temperatures drop and our winter rainy season draws closer, making it a great time to plant.  I've been working on renovating one of my larger succulent beds and I'd planned to cover that in my next post but the arrival of our Santa Ana winds offered an opportunity to reveal autumn's darker side: the brushfires that all too frequently accompany our seasonal Santa Ana winds.  Unfortunately, what was billed as a "mild" Santa Ana wind event nonetheless fanned a major fire on Monday afternoon, leading to the evacuation of 1500 people at its height.  The latest update is that the fire is just 15% contained.


We're fortunate to be 50 to 60 miles from the fire so, other than its impact on air quality, the Canyon Fire hasn't affected us directly.  However, as we do live in a fire danger area, any local fire puts us on edge and has us sniffing the air for the tell-tale smell of smoke.  My in-laws' home went up in flames in the 1993 Malibu Fire and I've never forgotten the heartbreak of that event.  I empathize with anyone impacted by such fires and I react negatively to any thoughtless individuals who put their neighbors at risk with careless behavior like setting off fireworks or tossing cigarettes in tinder-dry areas.

On a less sinister note, two other sightings drew my attention during the twilight hours this week:

In a Vase on Monday: Summer re-run

After 2 pleasantly cool, fall-like weeks, summer is mounting a re-run here this week, with temperatures expected to climb back up into the mid-to-upper 80sF as our notorious Santa Ana winds return.  Those winds can shrivel flowers in record time so I felt only a little guilty about cutting the roses and other flowers that have appeared since the temperatures dropped.


A dahlia I'd purchased in a nursery pot from a garden center 6 or more weeks ago bloomed for the first time this past week so I created an arrangement around it too.  I'd been under the impression that the bloom would be a lavender/white bi-color but it looks pink with blue undertones to me.  I had a hard time finding suitable companions for it so my choices are a bit of a jumble.


I've become very reliant on photo collages for my IaVoM (and many other) posts; however, this week I discovered that PicMonkey, the collage maker I've been using, has decided to charge for use of the tool.  I may opt in eventually and pay the membership fee but, for now, I'm trying another tool, Be Funky.  I tried one other but found it less than intuitive to use.  If you know of a good free collage tool, let me know!

Visit Cathy at Rambling in the Garden, our "In a Vase on Monday" host, to find more floral and foliage arrangements created by gardeners from materials close at hand. 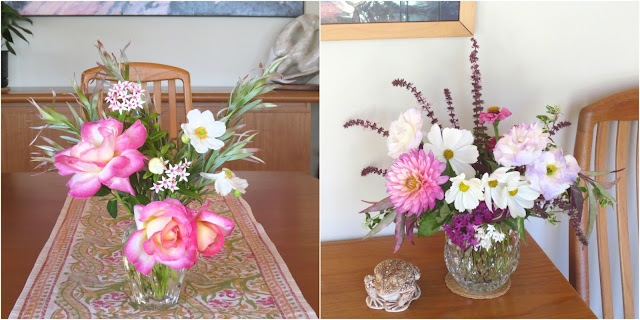 I'm wrapping up my coverage of the Capital Region Garden Bloggers' Fling with photos from 2 more venues from the last day of our tour.  The first stop of the morning on June 25th was Merrifield Garden Center.  It was a huge place, chock full of beautiful plants. 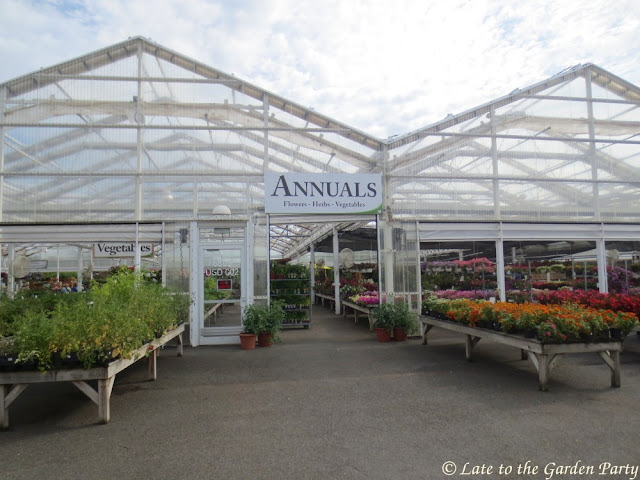 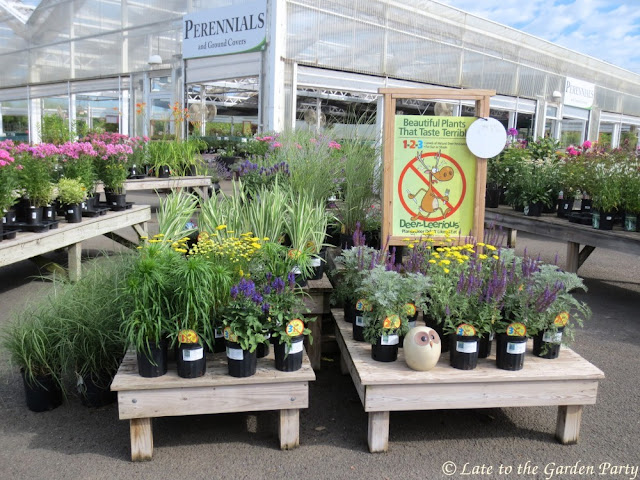 Under normal circumstances, I eschew the indoor areas of garden centers unless I need to pick up new garden gloves, seeds or fertilizer but as taking plants of any significant size home in my suitcase was impractical, I chose not to tempt myself by spending too much time in the nursery area.  And there was a lot to see inside, not to speak of the fact that the nice people at Merrifield welcomed us with beverages, fruit and muffins.


Toward the end of the last jam-packed day of the Fling, we visited a 170 acre estate garden in a rural area of Middleburg, Virginia, the last private garden on the tour.  The owners purchased the property and its stone farmhouse, built in 1790, in the 1970s.  Upon arrival, we were greeted by the property's goodwill ambassador.

The downside of presenting this garden nearly 3 months following the event is that my memory of many of the details have faded.  As I recall, my exploration was largely limited to the area behind the house; however, views of the horse country surrounding the house were visible on all sides. 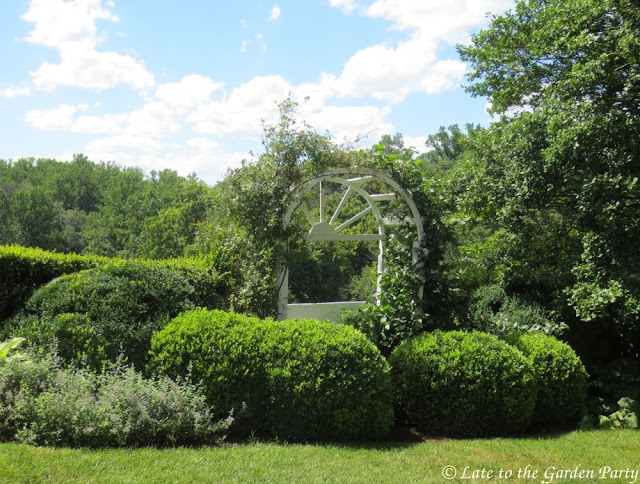 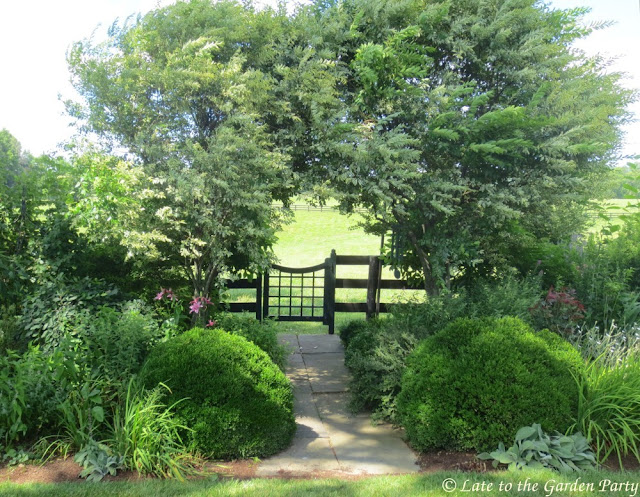 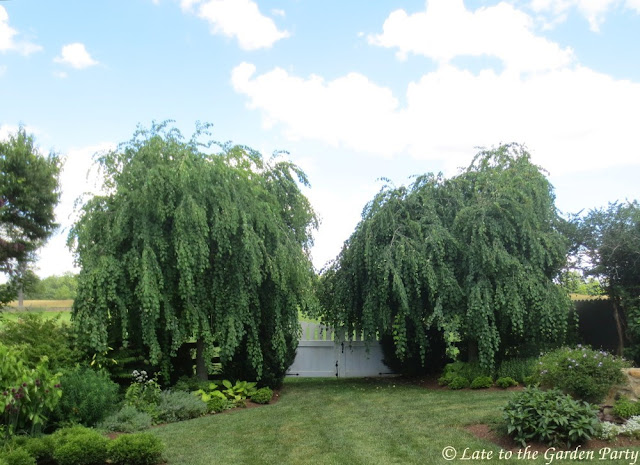 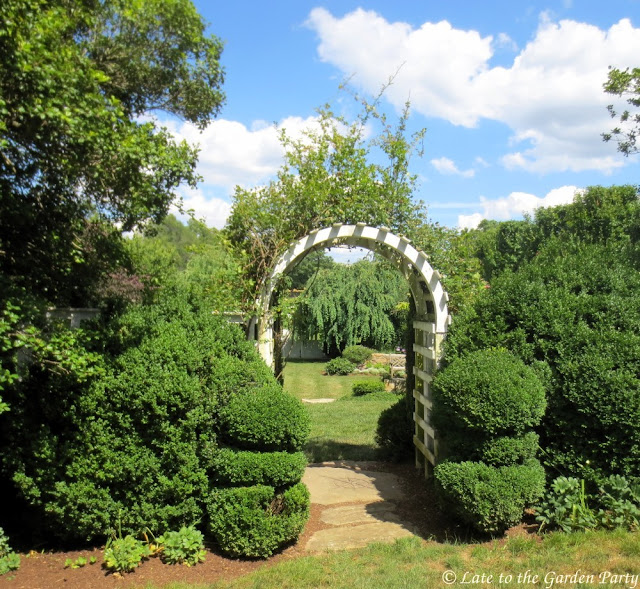 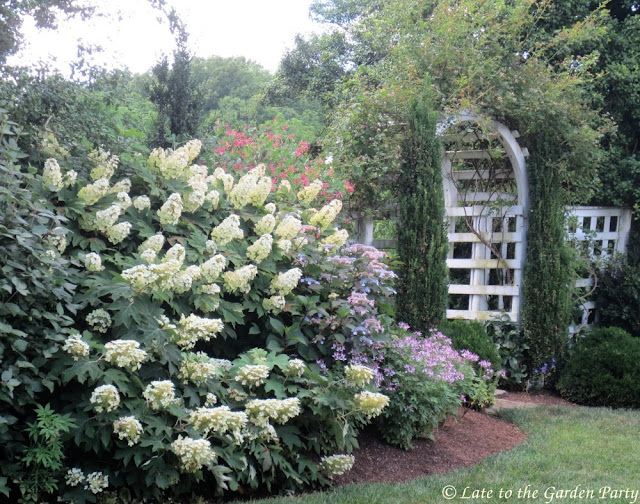 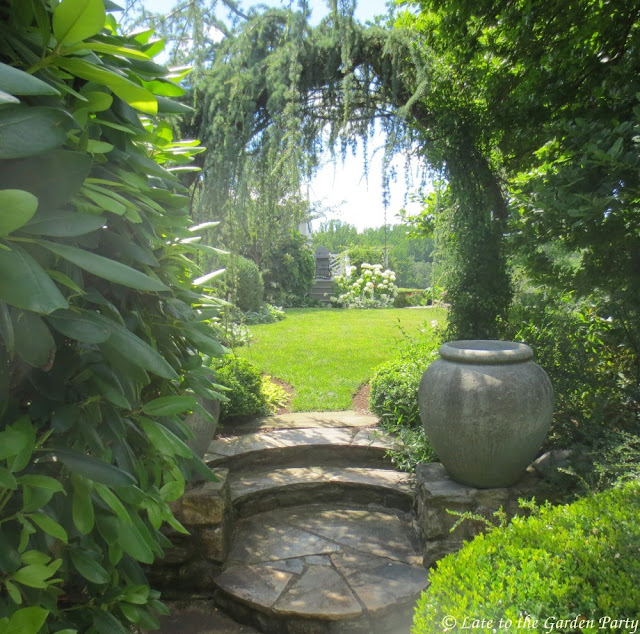 There was a pretty pond. 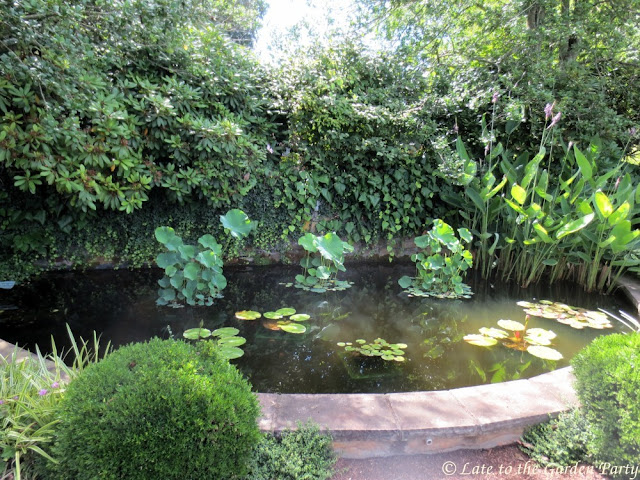 And an inviting pool. 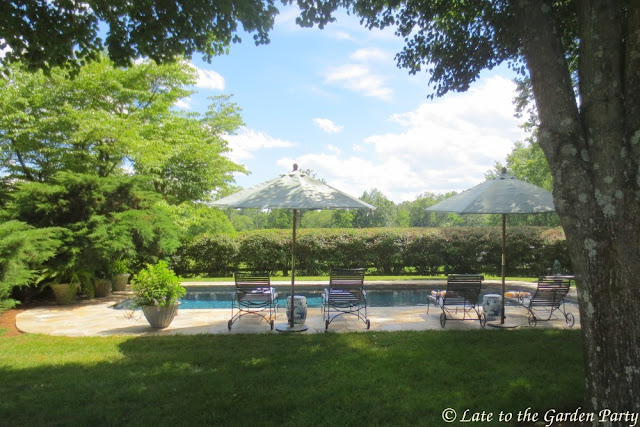 There were comfortable places to just sit and enjoy the garden too. 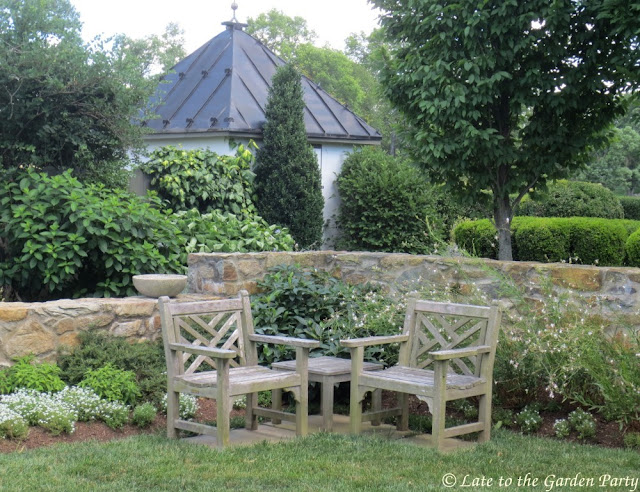 Decorative details were scattered throughout the garden but all blended in beautifully with the landscape. 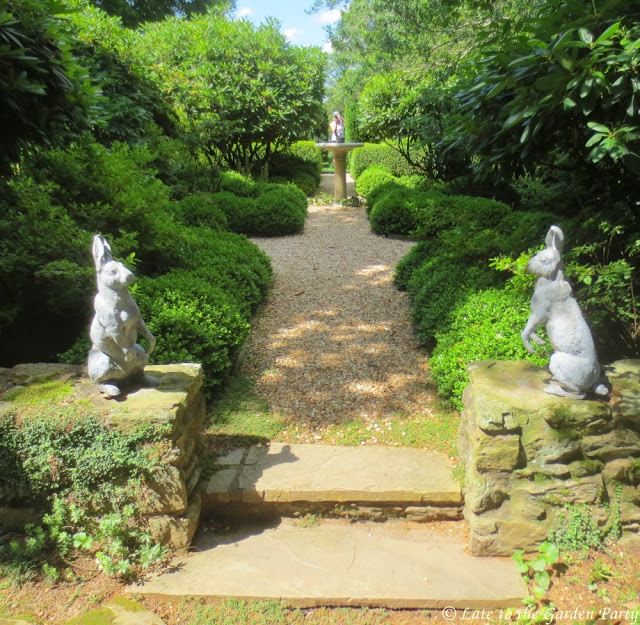 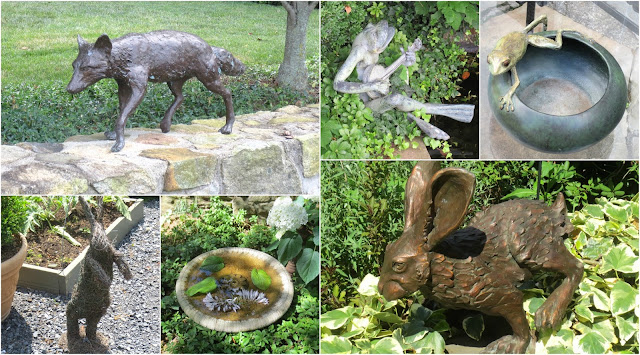 The last day of my first Garden Bloggers' Fling was as wonderful as the first 2 days.  Tammy Schmitt (Casa Mariposa) and her team did an excellent job of planning the event and I'm appreciative of how friendly all the Flingers were, as well as the generosity of the hosts who opened their gardens to a hoard of bloggers with their cameras.  I'm very glad I attended and only wish I'd been more strategic in my approach to collecting photographs of each of the gardens we visited so I could have presented them in the best possible light.  If you'd like to view my prior posts on the Fling you can find them here:

Best wishes for a great weekend.