Wednesday Vignette: What says spring to you?

Even in the midst of drought, spring can be an almost overwhelming experience here.  This year, late winter blooms combined with spring blooms to create a floral explosion.  Honestly, it's left me wanting more foliage to put my garden into balance, although summer, expected to be very hot and dry again this year, will undoubtedly correct the problem all too soon - as temperatures rise, the flowers will beat a hasty retreat and the garden will be greener again.

However, now, with so many flowers competing (no, screaming) for attention, it's easier to focus on individual blooms, a few of which left me sighing this week.

In a Vase on Monday: An angel by any name

My roses are starting to bloom.  The beautiful noID lavender rose had two large blooms I couldn't resist cutting for my contribution to "In a Vase on Monday," the weekly meme hosted by Cathy at Rambling in the Garden.  I thought I'd match them with some of the other lavender blooms I had in the backyard but the roses have a lot of pink in them and the other flowers looked dull by comparison.  So, I improvised.

The lavender rose came with the house.  Unlike some of my other inherited roses, it had no identification tag.  While its color and scent reminds me of 'Angel Face', the blooms are larger than those of the cultivar I had in my former garden but perhaps this shrub is simply more robust than my former specimen.

I REALLY didn't intend to put together a second vase this week.  But then I discovered that one of the Hippeastrum I planted in the succulent bed along the street 3 years ago was in bloom.  I'd been waiting weeks for the bud to open.  I figured it wouldn't be in good shape for next week's vase so I went ahead and cut the stem, then hurriedly collected foliage and flowers to accompany it.


The two arrangements properly dressed up the house to celebrate Easter and the official start of spring.  The lavender rose arrangement sits on the dining room table.  (I finally tossed the Cymbidium and the rest of that vases's contents.) 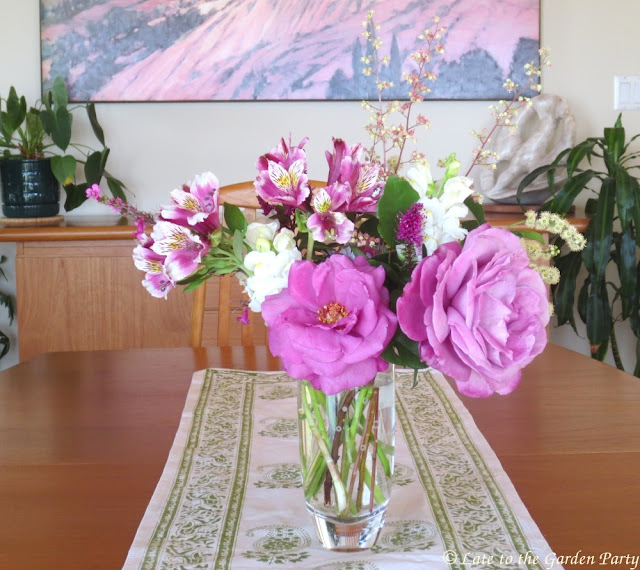 Last week's pink arrangement in the master bedroom was replaced by the vase with the Hippeastrum. 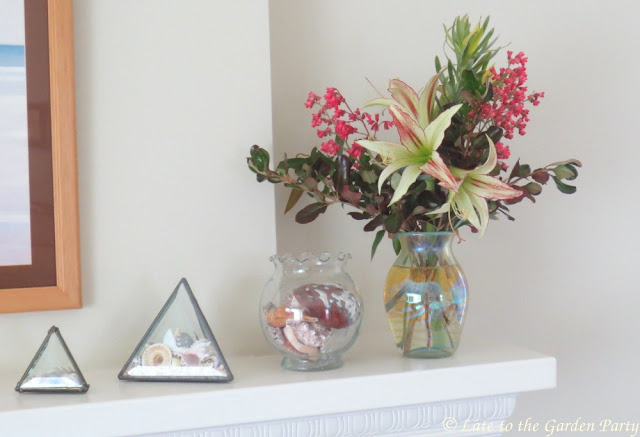 Speaking of Easter, my brother sent me his own personal Easter greeting, in the form of a photo he took in 2014.

While I'm sure you wouldn't be happy to find this hare in your garden, the look of annoyance on his face at being caught in the act, "deadheading" flowers, is precious.  My brother is a much better photographer than I am.  His 2015 garden photos can be found here.

For more "IAVOM" posts, visit our host, Cathy at Rambling in the Garden.

Once a month, Loree of danger garden invites us to celebrate the plants in our garden making the biggest impression at the moment.  Most of my selections this month aren't exotic or unusual.   However, in each case, the plant's either at its peak of performance or it's done something to surprise me.

First up is Ajuga reptans 'Mint Chip'.  A very low grower, it fits in nicely alongside the backyard walkway.  Its pretty blue flowers seemed to appear overnight. 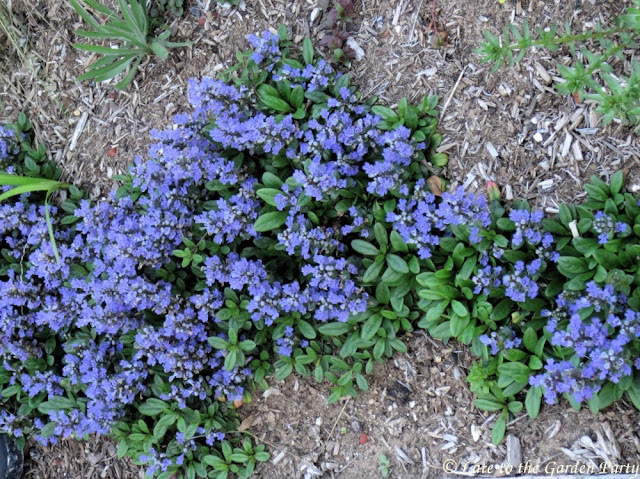 Another low groundcover that suddenly burst into bloom this month is Anagallis 'Wildcat Mandarin', a hybrid I planted 2 years ago.  It needs to be cut back after it finishes blooming but that's virtually all the maintenance it requires. 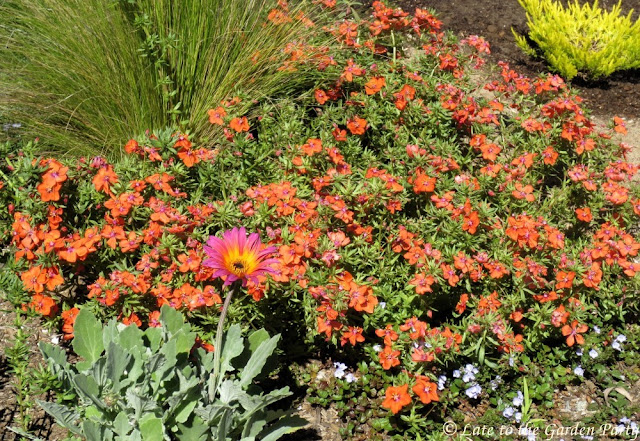 Felicia aethiopica is providing another burst of blue in the backyard.  This variety, called 'Tight & Tidy' by the grower, is just that.  Its projected size, 16 inches tall and 30 inches wide, is shorter than the variety usually offered by local garden centers.  (It's currently in danger of being engulfed by Lupinus propinuus, which is growing larger and faster than I imagined it would.) 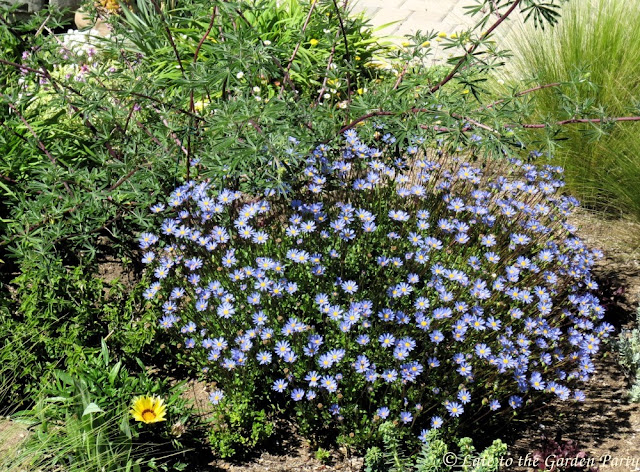 The front garden has its own bolt of blue in the form of the noID Ceanothus hedge that is currently near full bloom.  This hedge, trimmed frequently to keep it within the bounds, probably doesn't have a long life ahead of it.  Since we moved in, I've already lost 3 sections of the front Ceanothus hedge and one section of the backyard hedge.  I've considered removing the entire thing but, when it blooms, granting it mercy and letting it exit on its own terms is an easy decision to make. 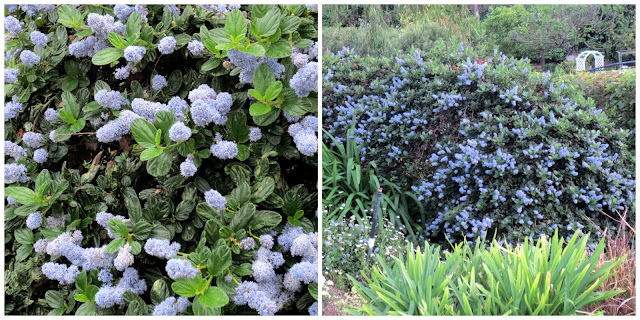 The garden has also produced some jolts of hot pink this month.  One of the plants providing that bright color is Callistemon 'Hot Pink', a hybrid I acquired last year.  The plant is still relatively small but it does its best to make an impression.  The only problem with it is that its floral color clashes with that of a number of its bedmates so it may have to move. 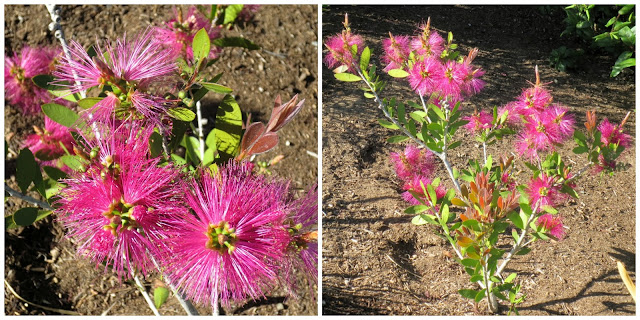 More hot pink color is provided by Pelargonium cucullatum 'Flore Plenum' (aka 'Golf Ball').  This was one of several Pelargoniums I picked up at a Geranium Society sale at my local botanic garden last year but it appears to be the most vigorous of the lot.  There's a nice red edge to the bright green leaves that complements the flowers well. 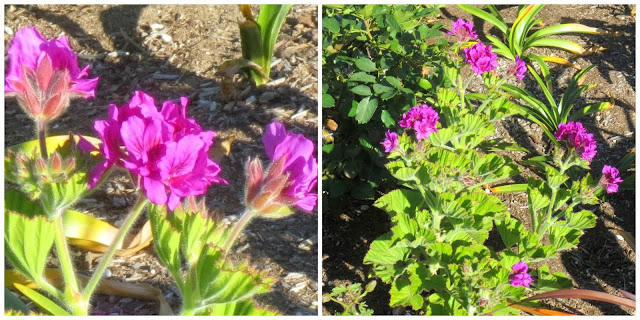 A more subdued bloomer sits on the back slope, where it gets little attention.  Carpenteria californica (aka Bush Anemone) is a drought tolerant, native plant that tolerates sun or shade conditions.  It seemed a perfect choice for the back slope when I planted it in 2012 as the area was in shade most of the day but it struggled to adjust to the increased sun exposure when we took out the giant Yucca Elephantipes there early last year.  It benefits from tip pruning, which I neglected to do last year.  Full of round, balloon-shaped buds now, pruning will have to wait. 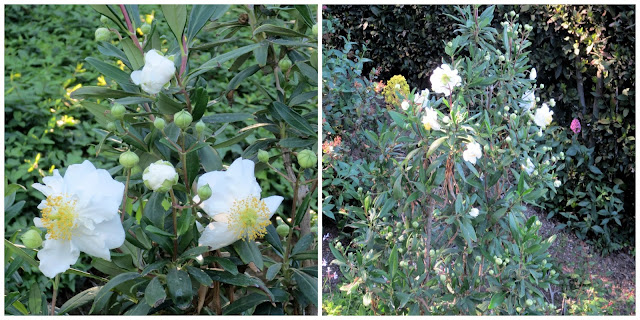 My last entry, which also grows on the back slope, may be mundane but it falls into the "surprise" category.  It's an artichoke.  It was leftover from 6-pack of plugs I planted a few years ago.  With no more room in the vegetable garden, I stuck the seedling on the slope.  While it hasn't produced any chokes, it's out-lived the other plants I put in that year.  It gets very little water and dies back each summer but it keeps reappearing after our meager winter rains, flaunting its attractive gray foliage. 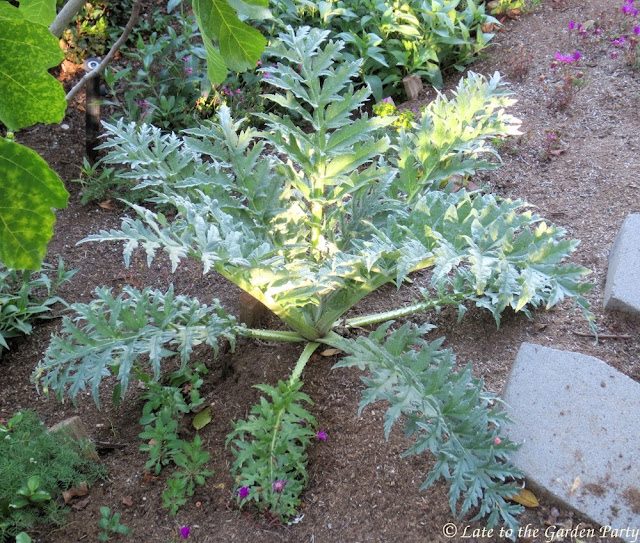 I've an ongoing struggle with the resident squirrels that eat more of the seed I put out for the birds than the birds do.  My husband built a cage around my largest feeder but, in time, the squirrels found their way in.

As the bottom metal plate on the feeder was disintegrating, I decided to retire the "squirrel feeder" and went shopping for a new bird feeder.  Luckily, the local wild bird food store had a special on squirrel resistant feeders.  (Yes, we have a store catering specifically to the needs of wild birds.)  I bought the top-of-the-line feeder, an improvement on the "squirrel buster" feeders I already had.  It's marketed as "guaranteed squirrel proof."  (You can see how it works here if you're interested.)

Did it work?  You be the judge.

After two days of multiple attempts to crack the feeder, Mr. Squirrel was found sitting dejectedly at the top of the feeder pole.


The birds seemed happy that they no longer had to share the feeders. 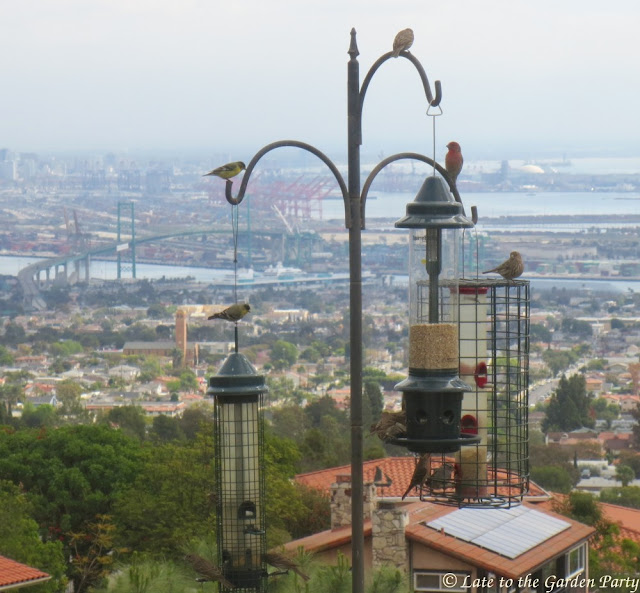 It appeared that Mr. Squirrel had come down in the world.  Literally.  Or so I thought.

So, the "squirrel feeder" has been rescued from the trash bin.  My husband affixed a plastic pot saucer to the bottom of the feeder to replace the disintegrating metal one and I filled it with seed.  The squirrels aren't getting the good stuff though - they'll have to make do with the cheap seed mix from the local big box store. 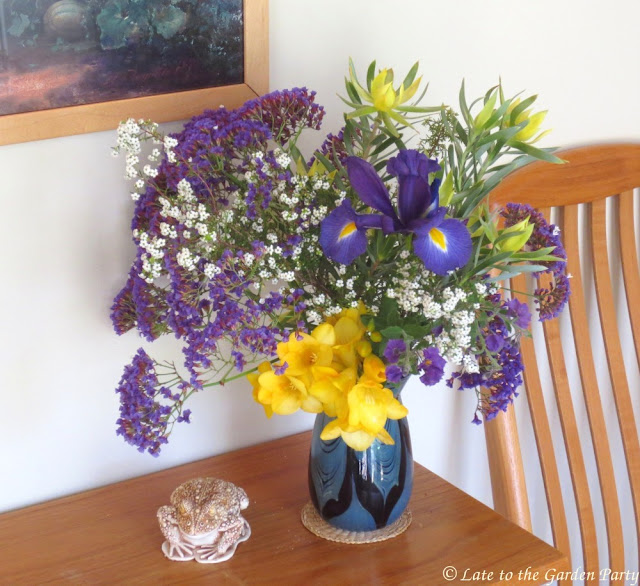 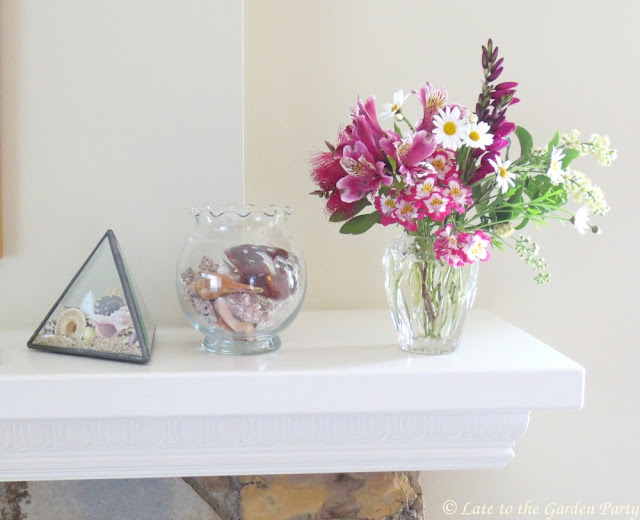 In yesterday's Bloom Day post I bemoaned  the fact that, in spring at least, my garden seems out of balance, with flowers dominating the scene.  That doesn't mean I don't have a lot of foliage plants.  I have 29 trees by my current count and the entire property is surrounded by hedges of various kinds.  While I've taken out all of the lawn, I've added ornamental grasses as well as creeping thyme throughout the garden as ground cover.  And do we even need to discuss my Leucadendron collection?!  In summer, when the heat is on and flowers are in retreat, foliage plays a more dominant role, even if the floral elements demand the central focus in spring.

But, even in spring, some foliage plants command attention.  The Callistemon 'Cane's Hybrid' I added in the middle of the backyard border last March is one of those plants.  This shrub, purchased in a 1-gallon container to fill the spot vacated by a tall peppermint willow (removed to address a neighbor's complaint with obstruction of her view of the harbor), was probably one foot tall when I planted it but it's already 4 feet tall.  It does bloom but, at the moment, its the fresh new foliage that caught my eye.


The Callistemon isn't the only foliage plant with orange-tinged spring foliage.

Other notable foliage this month includes:

For views of more flashy foliage, visit Pam, the host of Foliage Follow-up, at Digging.