In a Vase on Monday: Variations on a Theme

There's still no new vase-worthy floral material in my garden so once again I was challenged to try putting new spins on the flowers that have been in bloom for some time.  In the first case, I was aided by a vase I received as a Christmas gift.  I received 2 vases for Christmas but this week will feature just the one.  It's actually not new but rather a vase that's been in my family as long as I can remember.  After my mother passed away, I told my brother to dispose of everything as he saw fit, taking away just a single family memento, a tray my father brought home from his travels during his service in WWII as a gift for my mother.  Last July, while talking to my brother's girlfriend, I mentioned a vase that was stuck in my memory.  She mentioned it to my brother and it arrived in a wrapped package for Christmas.

As you can see, the vase has a wide mouth but it isn't particularly deep.  I filled it with glass marbles to support the short-stemmed Rudbeckias still blooming in my cutting garden.


Impressed by the pretty green Chrysanthemums Susie of pbmGarden and other IAVOM contributors have used in their vases, I picked up a bouquet of these flowers at my local supermarket last week with an eye to using the flowers to perk up some of my own arrangements.  I removed the pink elements in the smaller of last week's vases, cleaned up the remaining materials, and added a few of the Chrysanthemums, as well as some Campanula stems that had been beaten down by last week's rains.


I also added some of the Chrysanthemums, as well as berry-laden stems pruned from an unruly Cotoneaster I cut back last week, to put another spin on the 'Zombie' Amaryllis (Hippeastrum) still producing new blooms in my shade house.

As I was preparing this post, I remembered that January December 29th marks the 7th anniversary of my blog.  On the one hand, that feels like a long time ago - I couldn't even remember the subject of my very first post - but, on the other hand, the passage of time seems lightning fast although in that time I've somehow managed to publish 1164 posts and accumulate over 900,000 views.  I appreciate all of you who've chosen to read those posts and those of you who've offered support, encouragement and suggestions both in response to life challenges big and small and my ongoing, never-ending effort to transform the garden acquired 9 years ago into something that's more clearly my own creation.  THANK YOU!

For more of the IAVOM posts that have managed to accomplish the difficult task of energizing Mondays, visit our creative and conscientious host, Cathy at Rambling in the Garden. 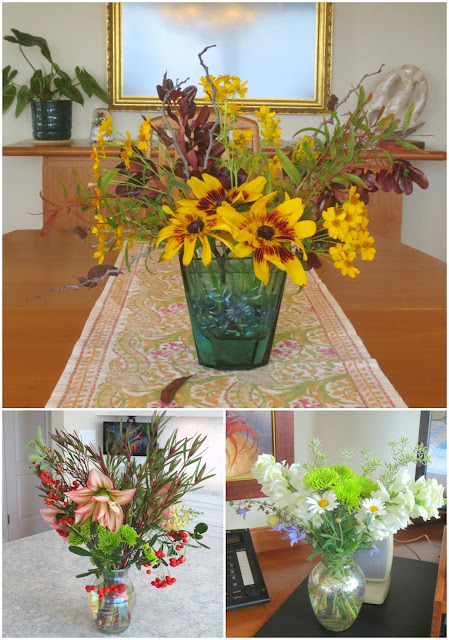 Actually I took this photo on Thursday but I couldn't resist the alliteration.  At sundown, as our latest rainstorm moved out of the area and the clouds moved out of the way to briefly reveal a clear view of the San Gabriel Mountains to the east, everything turned a delicious shade of pink. 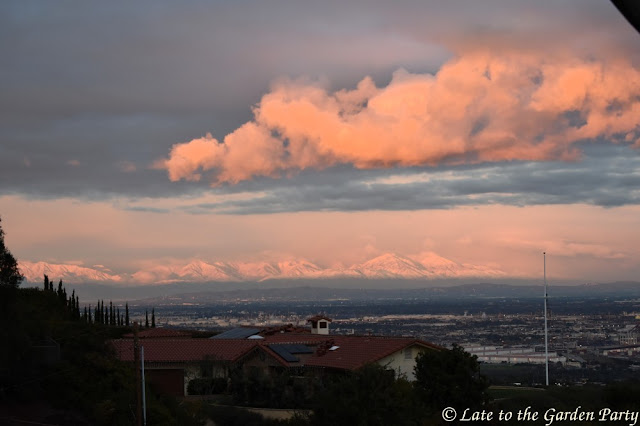 I hope you find the last weekend of 2019 both serene and colorful.

Coastal Southern California isn't known for its fall foliage color.  However, looking back at posts from prior years, it appears that I usually uncover traces of it sometime in November.  That didn't happen this year but perhaps I was just distracted, or maybe the sharp cold snap that accompanied the so-called bomb cyclone in late November did the trick at last.  In any case, here are local examples of the fall color I captured in December before winter officially moved in.

I hope you enjoyed a marvelous holiday and that you have an opportunity to continue to bask in its glow through the coming weekend - or the warmth of a heating pad, if that's your preference.

In a Vase on Monday: A Zombie Christmas

There's still very little going on in my garden when it comes to floral displays.  I've got seedlings coming up here and there but it'll be a good month or two before I start to see vase-worthy blooms from those so I've made do this week with twists on flowers I've been using over the past several weeks.

My husband and I held our annual Christmas smörgåsbord on Saturday and I prepared an arrangement for the new kitchen island to great our guests.  The arrangement was constructed around a single stem of Hippeastrum 'Zombie'.


On Sunday morning, in response to warnings about another rainstorm headed our way, I gathered a few more blooms for a second small arrangement.


Last week's dry vase did only so-so.  The succulents were fine of course but the small amount of water in the floral tubes used to sustain the berries and Coprosma was rapidly depleted and, as they couldn't be refilled without deconstructing the entire vase, those plants shriveled.  The Leucadendron stems fared somewhat better but I'd be hesitant to create a wreath of them, at least for use inside.  Outside, without exposure to the dry furnace air, they might hold up better.

For more of this week's IAVOM creations, visit Cathy at Rambling in the Garden.

Finishing up a home remodel and putting our house back in order while also preparing for Christmas and dealing with a serious medical problem affecting my beloved cat has added considerable chaos to this holiday season.  As things get sorted out, I thought it was time for some updates.

Our contractor finally finished up his crew's work on our house last Friday so I took some updated pictures of the remodeled spaces.


I pulled out some of my favorite Christmas decor, spreading it through the front entry and into the living room.  In deference to my husband who's something of a Scrooge when it comes to Christmas, tolerating rather than celebrating it, I restrict most of my decorations to those areas of the house.

My Christmas decorations are more subdued this year than in prior years but it looks as though I won't have time to do much more this year.  I had to put up a live tree of course.  I've only missed doing so once in the years my husband and I've been together, and that was because we'd only just moved into this house.  In fact, today marks the 9th anniversary of that move.

Our tree is an eclectic collection of ornaments accumulated over decades.


My cat Pipig is the only member of our household besides myself who really enjoys the Christmas tree.  She loves the curl up under it but, following surgery for breast cancer a week ago, she's been locked up in the guest bathroom except for a brief visit to the vet for a progress check on her recovery.

The good news is that the veterinary oncologist my vet consulted feels a second surgery (to remove the mammary glands on the other side) isn't necessary.  However, they're recommending chemotherapy to give her a better chance of a longer life.  I'll be talking to the oncologist after the new year.  Pipig's stitches are scheduled to come out Monday afternoon and she'll be freed of the sausage suit and the plastic collar she hates so much to spend as much time as she wants under the tree.

I wish you luck in realizing your own holiday wishes. 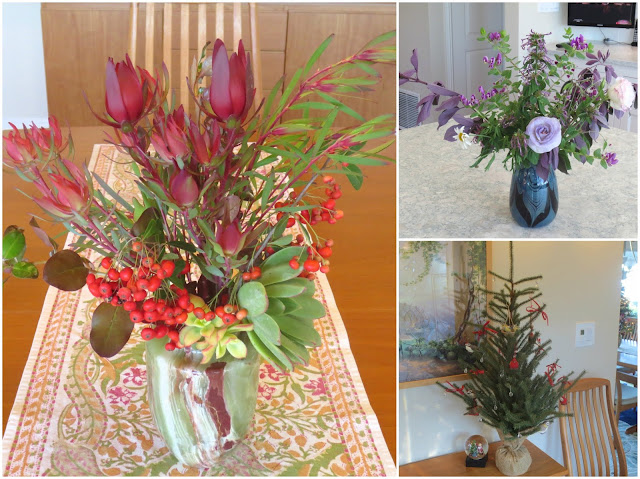 I've got fewer flowers to share than I had last December but perhaps that can be explained by the colder-than-usual temperatures we had in late November and lighter rain.  Or, it could be largely attributable to my reduced involvement with the garden during our protracted remodel, the last piece of which wasn't completed until this past Friday.

Let's start with the plants I consider my stars this month:

The next group consists of plants that surprised me for one reason or another:

Although I haven't done as much gardening this fall, I have a few new additions to share:

As always, I have a collection of flowers that don't fall in any of the previous categories, yet are worthy of notice.  As usual, I've organized these into color collages:

For more posts on this Garden Bloggers' Bloom Day, check in with our host, Carol at May Dreams Gardens.  Best wishes to all for a pleasant holiday season!