In a Vase on Monday: Alstroemeria sets the scene but does Freesia steal the show?

The garden may already be waking up to celebrate spring but it's been really cold here.  Not as cold as many of you reading this may be used to in late February but cold by local standards.  Our temperatures are barely exceeding 50F.  Sunday was drizzly, offering more gray clouds than sun and enough of a breeze to make 50F feel colder still so I spent little time outside deliberating on what to use to fill my vases.  I settled on Alstroemeria and Freesia as I walked out the door and made all my other selections to accent those choices.


The most unusual element in today's arrangements may be the Lotus berthelotii, also known as Parrot's Beak.  The flowers on this plant show up best when hanging down from a pot or other vertical element but most of mine are planted as ground covers.  It's proven effective (thus far) in keeping the raccoons from digging but admittedly the flowers don't show to maximum advantage when the plants are used this way.  It's an aggressive plant and needs regular trimming to keep it from covering everything in its path, although it's still less trouble than the raccoons.

My vases are in place for another week.  Visit Cathy at Rambling in the Garden to see what she and other bloggers have assembled this week. 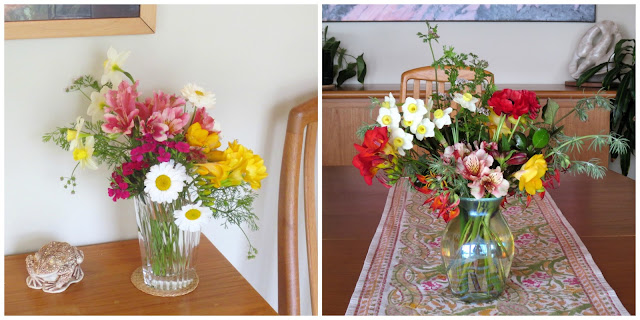 On the last Friday of the month, Loree of danger garden presents the plants currently garnering her favor and invites other bloggers to give a shout out about theirs as well.  I usually join in but yesterday I completely blanked out on the fact that February was rapidly drawing to a close, so this morning I zipped around my garden giving it a once-over and snapping some photos.

Here's a quick run through of this month's stand-outs:


And then there are the bulbs.

That's my quick February favorite wrap-up.  Visit Loree at danger garden to see the stalwart plants that are warming her heart after a particularly nasty winter in the Pacific Northwest.

Squirrels aren't visitors to my garden - they're residents.  Ever since we moved in and I put up my bird feeders, we've been at loggerheads.  I've gradually replaced my "squirrel resistant" feeders with tougher models, marketed as "squirrel busters."  Have I been successful in eliminating bird seed theft?  You can be the judge.


It wasn't the fault of the feeder, though.  It was my fault in providing him a platform to access it.  However, I don't think it was easy for him to feed from that angle as he quickly gave up the effort.  I'll probably replace the old, caged feeder eventually anyway but, for now, I'm satisfied that he's not stealing much from the birds.  He mainly makes do with what the birds drop on the ground, which is plenty.

The side garden, which also has 3 feeders, has one that's vulnerable to intrusions too.  I refilled them yesterday and, as I was doing so this fellow showed up.

He wasn't at all interested in the dried-up toyon (Heteromeles arbutifolia) berries scattered about.  He wanted bird seed and he wasn't at all afraid to take it with me standing a couple of feet away.  He can't feed from the newer feeders but he has no problem with an old model.  It may be squirrel resistant but it's not Scrub Jay-proof.

Squirrels!  They keep us hopping!


Note: I have no relationship with the companies that make or market the squirrel buster feeders.

There were a few items in the grab bag of photos I'd set aside for the Wednesday Vignette meme hosted by Anna of Flutter & Hum.  I couldn't decide which of these to post this week so I'm presenting all of them.  They bear no relationship to one another, other than that they all sing of early spring.

The first photo is an update of the front garden planted by my brother and his girlfriend.  In January, I shared a photo of the green mass of seedlings sprouted from the pounds of seed they scattered in the fall (which you can see here).  My brother sent me an updated photo last week to show me how things have progressed.

Those of you who viewed my last Bloom Day post may find it hard to believe but I inadvertently dropped several of my floral photos, including these of the Aeonium arboreum blooming along my front slope.


My last photo may not look like much but it represents a major achievement from my point of view: a peony in bloom in my garden.  Just one bloom.  On a plant I don't think is any bigger than it was last year when it also produced just one bloom.  And, yes, I also featured it in a Wednesday Vignette last year (which you can see here).  But, for me, peonies are the holy grail of flowering plants and the fact that this one lived to flower another year is a cause for celebration.

Visit Anna at Flutter & Hum for other Wednesday Vignettes.

In a Vase on Monday: Conjuring Spring

If I were Cathy at Rambling in the Garden, our host for "In a Vase on Monday," my post title would be properly illustrated with a wizard's wand and maybe a top hat.  Unfortunately, I don't have Cathy's wonderful collection of props and, feeling as I do these days, any conjuring I might do would probably involve a voodoo doll or two anyway, but I don't have those on hand either.  However, even if winter rains are expected to continue at least through this week, spring is definitely in the air.   Sunday brought a welcome break between rainstorms, as well as snatches of warm sunshine.  Birds were all over the garden, pecking at the earth in search of worms, splashing in the fountain, squabbling with one another at my feeders, and building new nests under the house eaves.


But on to the flowers.  When I prepared my Bloom Day post last week, I completely forgot about the calla lilies flowering on the back slope.  Spurred on by all the rain we've received this season (now officially triple the total amount we received during the entirety of the last season), the lilies look to be starting off a banner year.  I picked an armful of blooms.


The second vase is a simplified version of an arrangement I created 3 weeks ago.  My Alstroemeria have started to bloom and I'd originally planned to go pink this week but, noticing that I had stems of flowering Ceanothus dragging in the mud, I went with a blue and white color scheme instead.


Can you conjure up something from your garden?  If so, join Cathy's cavalcade of vases at Rambling in the Garden!  Here are mine in their places: 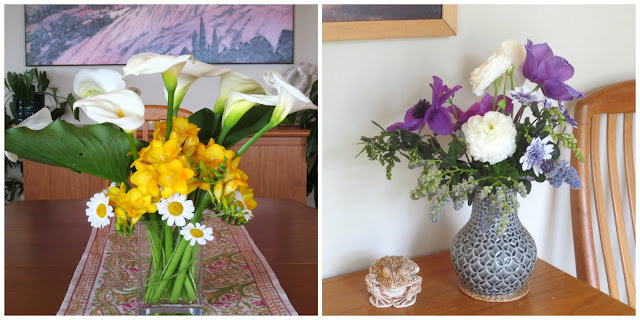 With what's reputed to be the most powerful storm of the season to hit Los Angeles in the offing, I took a spin through the garden to see if there were any tasks I should take care of before it arrived.  In the process, I took photos of whatever foliage caught my fancy for this month's Foliage Follow-up post, hosted by Pam at Digging.

I started on my neglected back slope, an area easily overlooked because it's largely invisible.  Accessible only by a narrow (and steep) stairway of  concrete blocks hidden behind a hedge, it's easy to ignore and, since the area was severely impacted by a horrific heatwave on the first day of summer last year, spending time down there has been more of a chore than a joy.  Cooler temperatures and the winter rains have done more than my poor ministrations to improve its appearance and there are now quite a few things to smile about.


Heading back up the stairs from the bottom of the slope brings me to my dry garden.  Just a couple of things grabbed my attention there.


The front garden contains a lot of foliage plants but most of them have received plenty of attention in prior foliage posts.  However, two vignettes drew my attention on my pass through.


Moving down the dirt path that runs parallel to the street behind a Xylosma hedge to an area below the main section of the front garden, I spent a good half hour pulling seedlings of yet another of my hedges, which consists of Prunus laurocerasus (not shown).  While doing this I discovered a mystery vine, which has clearly sprouted and been encouraged to spread by all the rain we've received this season.

Back up on the main level of the garden in the backyard, the Xylosma congestum hedge is still the most compelling foliage feature but I already gave that its due in last week's Wednesday Vignette (which you can see here).  However, there were a few more foliage plants that drew my eye.

That's it for my foliage highlights this month.  Visit Pam at Digging for more.