While cleaning up and replanting the area in front of our backyard fountain a couple of weeks ago, I decided to try using one of the seashells scattered there as a plant container for succulents.  The seashells were here when we moved in over ten years ago and I left most of them where they were, mainly because I had no idea what to do with them.

I'd planned to go to my local garden center to select new succulent plants but subsequently decided to use what I had on hand.

When I got around to the actual planting, I added more Oscularia deltoides and several rosettes of Graptopetalum 'California Sunset'.

I tried out a few different areas before placing the shell.

That project led me to rehab two other small planters, both of which had lost their appeal in the two or more years since I'd originally planted them.  I didn't take any before shots but here are the completed containers:

Little projects like these can be so satisfying!  I'm already thinking about which of the other seashells I inherited with the garden might be transformed into succulent planters. 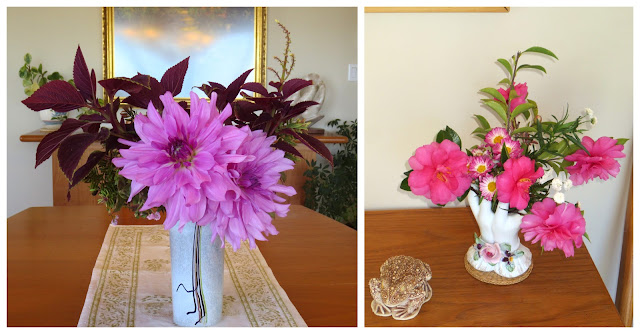 The Santa Ana winds are blowing again and the leaves of the deciduous trees are quickly falling so I thought it'd be a good idea to share what passes for autumn color here while it lasts.  We don't get cold enough to experience the kind of foliage color that the northeastern parts of the country are famous for, although the nights feel cold to us!

My largest Japanese maple, an Acer palmatum 'Sango Kaku', colored up earlier in the season and is now a mass of dry brown leaves.  I completely missed the colorful leaves of the peach tree on our back slope so I haven't included either in this post but here are the rest:


The Ginkgo tree we planted last year has been a disappointment.  Two late heatwaves, arriving back-to-back, burned the tree's leaves a dismal brown and caused them to drop prematurely.  Later the onset of a little rain and cooler temperatures brought out a small amount of spring-like green leaves that have continued to hang on.

By comparison, my neighbor's front garden provides a lot of color.


That's it for me this week.  The rain that was in the forecast for early next week sadly appears to have evaporated, although there's a chance of some later that week.  Fingers crossed. 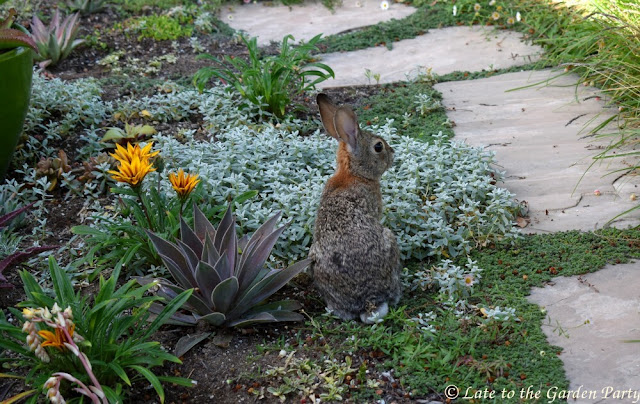 The upcoming Thanksgiving holiday called for warm colors in this week's floral arrangements, even if the temperatures in my part of the Northern Hemisphere are probably warmer than most at the moment.  During the last several days temperatures have ranged from the mid-60s to the low-70sF (18-22C) and that trend is currently expected to continue into the coming weekend.

My second arrangement made use of the golden flowers of Tagetes lemmonii (aka Mexican marigold).  My husband doesn't care for the scent of the leaves but thus far he apparently hasn't noticed it.  Hopefully, the front entry is airy enough that its placement there won't bother him.

I downsized last week's arrangement featuring Leucadendron stems and a succulent rosette for placement on the kitchen island.

Happy Thanksgiving to all who are celebrating the holiday!  For more IAVOM creations, visit our host, Cathy in Rambling in the Garden.

When Christmas takes over garden centers

In coastal Southern California, our cool season is the optimal time to plant.  But when summer hangs on well into autumn as it usually does here, I often delay the plant shopping trips intended to fill the empty spots in my garden.  The fatal flaw with such delays is that, when I finally get out there, I run head-on into the all-consuming rush toward Christmas that consumes most garden centers.  I don't blame them - they need income to stay afloat and selling Christmas trees and other holiday paraphernalia is a big moneymaker.  It's entirely my fault when I fail to recognize that the holiday take-over is already underway.

A friend and I made a trip south to Orange County earlier this week to visit two garden centers.  Although the trees hadn't yet arrived at Roger's Gardens in Corona Del Mar, space had already been cleared to make way for them, which means there were fewer garden plants to peruse.

Our other stop was OC Succulents in Irvine.   The year-end holidays weren't an obvious issue there but the prices were.  Since the pandemic, prices at this wholesale nursery (and its smaller outlet in Torrance) have soared.  Maybe customers with wholesale licenses get much better deals but I didn't see any of the bargains we found years ago when shopping the nursery.

Given the circumstances, my purchases were relatively modest.

I managed to polish off planting the barrels that were left empty when I dug up the dahlia tubers and stored them away for the winter.

I also finally addressed the area around our backyard fountain.  I'd decided months ago to replace the mess that was there with a variegated Lomandra and purchased a 'Platinum Beauty' for that purpose but I held off because I was afraid that it would quickly get too large for the space and I'd be back to square one.  Finding a dwarf Lomandra 'Arctic Frost' was the ticket.

Yesterday afternoon, in an effort to find a few small plants to fit into the empty spots in the pink-themed barrel planter, I made a brief stop by Armstrong, my local garden center, after a Friendsgiving lunch.  Just three days after my prior plant shopping trip, the holiday influence was even more pervasive there.

I've absolutely no issues with the holiday themes that take over garden centers, although I do wish they'd hold off until after Thanksgiving.  However, as that's not the trend, I need to factor the ever-advancing creep of holiday preparations into my fall season plant shopping schedule.

Best wishes for a pleasant weekend.