Two weeks ago, before summer officially began and prior to the June's first heatwave, a friend and I attended the Los Angeles Cactus & Succulent Society's Drought Tolerant Plant Festival at the Sepulveda Garden Center, a community garden run by the City of Los Angeles.  We arrived early under gray skies and and enjoyed blessedly cool temperatures, which isn't something you can generally count on in June in the San Fernando Valley.  I know as I grew up in that inland valley. 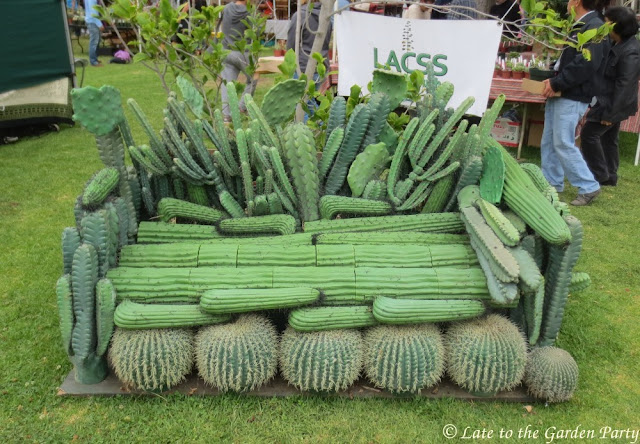 I took my time to scope out the plants.  There were some beautiful specimens that were too expensive for my blood.

There were few real deals but, in retrospect, there were many I should have considered more seriously.


Other than cactus, succulents and bromeliads, there weren't many other drought tolerant plants but there were a surprising number of pot sellers.  No, California hasn't legalized recreational pot (at least not yet).  I'm talking about clay pots. 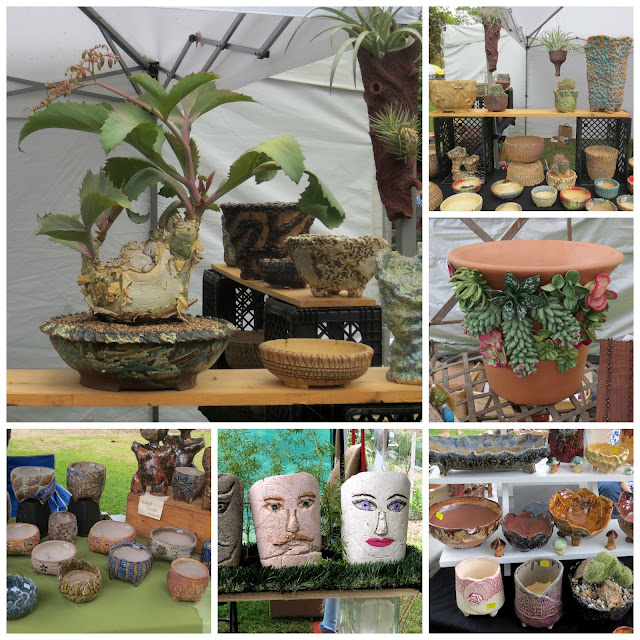 Another surprise was an exhibit by the California Turtle & Tortoise Club.


Succulent guru Debra Lee Baldwin was scheduled to speak so, after making our purchases, we killed time before her talk looking at some of the community gardens.


We came upon a plant that intrigued us both but neither of us could identify.

The Matilija poppies (Romneya coulteri) were blooming too.

I didn't go home with a lot but I did make two purchases.

If the event had followed our recent heat apocalypse rather than preceding it, maybe I would have purchased more plants but there's always the Inter-City Cactus & Succulent Society Show & Sale.  I may be able to entice my husband to go if August isn't blazingly hot (ha!).

In a Vase on Monday: Heat Hardy Survivors

Last week's heatwave proved to be much worse than anticipated in our area.  Our temperature reached 105F (40C) on Monday afternoon.  I can't recall a temperature that high since we moved here and, coming on the heels of unusually cool conditions in May and early June, many plants just couldn't adapt.  I don't think I've ever lost so many plants virtually overnight.  The heatwave was a reminder that drought tolerant doesn't mean heat tolerant.  Some plants died immediately, others were scarred and, as I've heard can be true of winter freezes, the damage took days to show in other cases.  It was a scary start to what forecasters have predicted may be a particularly difficult summer, especially with the simultaneous arrival of aggressive wildfires in California and throughout the Southwest.  Luckily for us along the coast, the marine layer returned last Tuesday, bringing our temperatures back down; however, they're already on the rise again.  So, paraphrasing Bette Davis: fasten your seatbelts, it's going to be a bumpy summer!

Many flowers retreated when the heat struck but I have some heat tolerant survivors.  My Grevillea in particular took the beating in stride with just a bit of burnt foliage.

As you can see, I was able to find some heat tolerant companions for the Grevillea.

Most of the Eustoma in bud or bloom also survived the heat, although some of the foliage got toasted.  I noticed that the plants installed last year have far thicker and more succulent leaves and stems than any of the plants installed as plugs this spring, which presumably gave them greater resilience.


I've still got Agapanthus in bloom but couldn't find inspiration for any new pairings there.  The dead sweet peas plants went into my green bins but I planted Zinnia plugs in their place.  Zinnias are heat tolerant, if not especially drought tolerant, so I hope they'll provide new options in future weeks.  In the meantime, visit Cathy at Rambling in the Garden, our illustrious "In a Vase on Monday" hostess, to find other floral and foliage creations.

June Favorites: Looking at the Positives

If you read my last post, you know I was upset by the impact our start-of-summer heatwave had on my garden.  It's worse in some areas than others but it's hard to walk through the garden without fixating on dead and maimed plants.  Loree's monthly favorite plants post at danger garden forced me to take a closer look at what's looking good despite the impact of what I've been thinking of as the "heat apocalypse."  On the good side, most of the plants I installed in May and early June, including the 5 Xylosma congestum shrubs planted along the street, survived.  The dry garden doesn't even appear to have registered the event.  The backyard bed I featured in my May favorites post still shines and the garden beds alongside the front walk look good.

So here are a few of the plants that lightened my heart as I roamed my garden yesterday:


My thanks to Loree for nudging me out of my funk.  Visit her to find her favorite plant selections this month and links to posts on the same theme by other gardeners.

Gardeners in colder climates rue the losses that come from serious freezes.  In my frost-free zone, it's heat that causes damage.  Summer arrived here in Southern California in a fury and my garden felt the impact, despite what I'd hoped were reasonable stopgap measures.  While heat blasts always have an impact, the most recent heatwave, which extended from Friday and culminated on Monday when we reached a 105F (40C) high here, caused far more damage than usual.

I'd expected the sweet peas (Lathyrus odoratus) would go from the outset so that wasn't such a surprise.

I saw the Shasta daisies (Leucanthemum x superbum) withering from my office window on Sunday so I also wasn't surprised by their condition.

Some plants just aren't hardy enough to handle the heat and dry conditions here to be worth saving so I'll let them go.

I've always known that planting after April is a crap shoot.

I was a little sick when I saw Alstroemeria 'Claire'.

The condition of one of my long-time favorite plants, Plectranthus ciliatus 'Zulu Warrior', which I brought with me 5 years ago when we moved in, was heart-breaking.


The Campanula primulifolia I raved about last fall was delivered a death sentence.

Some plants, while injured, should come back.

Others seem to have suffered but are hanging on, at least for now.

Like freezes, the signs of heat damage may take time to show.  I noticed more this morning than I did Monday evening and Tuesday morning.  Even some of the Agapanthus, which I'd initially thought were unaffected, are looking worse for the wear.

All is definitely not lost.  With the exception of the impact to our air quality, the wildfires that are having such a devasting impact elsewhere haven't affected us.  My beloved Grevilleas, Leucadendron, and many other plants weathered this round of heat.  This summer is expected to be tougher than the last one and the early blast in June certainly reinforces the threat.  I'm going to eat into the water budget I've accumulated by my miserly irrigation schedule in an effort to improve the resilience of my plants to handle the next heatwaves.  I may also reconsider my efforts to appease my foliage-hating neighbor and let the tree canopies that so offend her spread to give my garden more shade.  Shade - and the lack of it - was clearly a factor in this heat apocalypse.  I'll haul off the dead, mourn my losses, and move on.

On the positive side, for my Wednesday Vignette, there are grapes ripening in the dry garden - and the raccoons haven't got all of them (at least not yet). 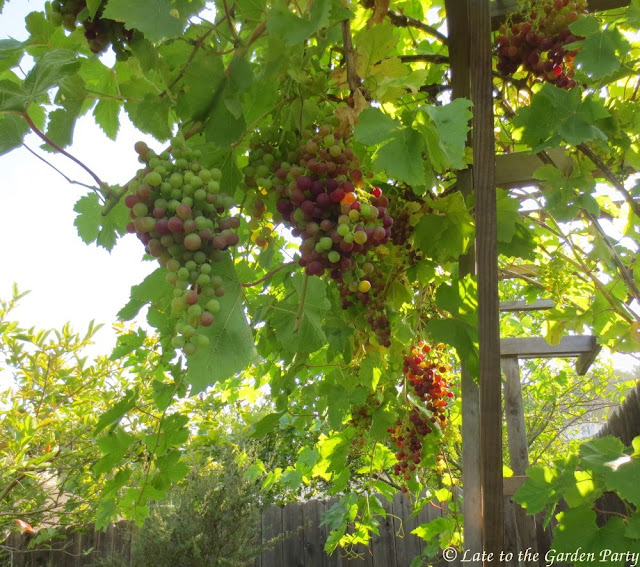 In a Vase on Monday: Summer Rescue Operation

I went outside to cut flowers for "In a Vase on Monday," the meme hosted by Cathy at Rambling in the Garden, at 8am on Sunday.  The thermometer already read 87F (30C) so it wasn't the optimal situation in which to cut flowers but I knew things were only going to get worse.  The heat is expected to climb to record levels throughout the US Southwest on Monday so I cut a lot of flowers.

Cutting lots of flowers means I have 3 vases to share this week.  The first was constructed to show off my Eustoma grandiflorum (aka Lisianthus).  The pink-flowered varieties planted last year have the largest number of buds but I didn't want to lose a lot of unopened flowers so I turned to another group I planted as plugs in April.  Their color wasn't what I'd anticipated when I submitted my mail order.

If you look very, very closely at the Eustoma, you'll notice faint pink highlights in what otherwise seems to be pale yellow bloom.  The variety is called 'Pink Champagne' but even I didn't see the pink in the flower until it was inches from my face.  At first, I thought maybe I'd mixed up the plugs but I checked my records against the grower's listing and I'm certain now that 'Pink Champagne' isn't as pink as the catalog photo led me to expect.  Maybe the pink will deepen, as has been the case with other of the solid pink selections, but I didn't count on that when I selected its companions for my vase.

I selected sweet peas as the starting point for my second vase.  They were already on the decline and I fully expect that the current heatwave will be the end of them.  Last week I paired blue/purple sweet peas with stems of Lupinus proquinuus in a bouquet for a friend but the lupines were mostly toast already so I looked further afield for companions this week.

I stuck to a blue and white palette.

As the heat worsened, I made a last minute decision to cut flowers for a third vase before ducking inside to get out of the heat and the almost unbreathable air tied to the Sherpa fire 100 miles away.  I cut just two stems of pink Eustoma as a starting point.

This vase balanced floral and foliage elements to a greater extent than the other two.

As soon as I went into the house, the birds made a bee-line for the fountain.  The critters have as much trouble with our heatwaves as we do.

Sitting at my desk late Sunday afternoon, I could literally see plants withering through my office window.  The Shasta daisies, which looked great Sunday morning, have already shriveled.  I wish now that I'd cut all of them.  Despite a good soaking on Saturday, I fear that some plants may not make it through the first official day of summer.

But my blue and white vase gives a sense of pleasant coolness to the dining room table. 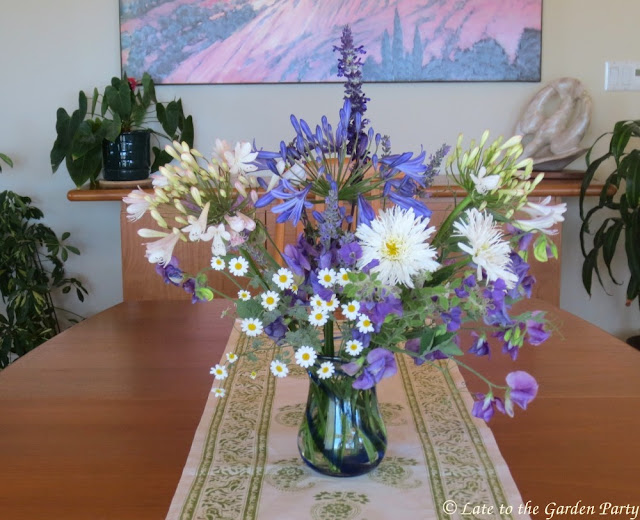 The vase with the 'Champagne' Eustoma adds cheer to the front entry. 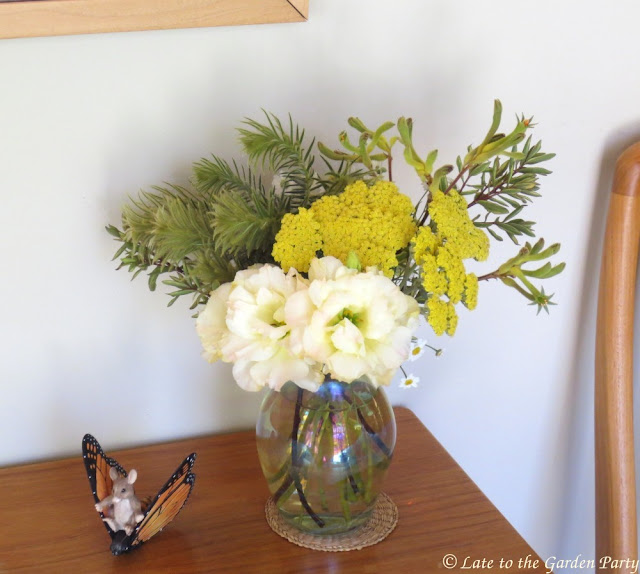 And the vase containing the "true" pink Eustoma found a place on the bedroom mantle. 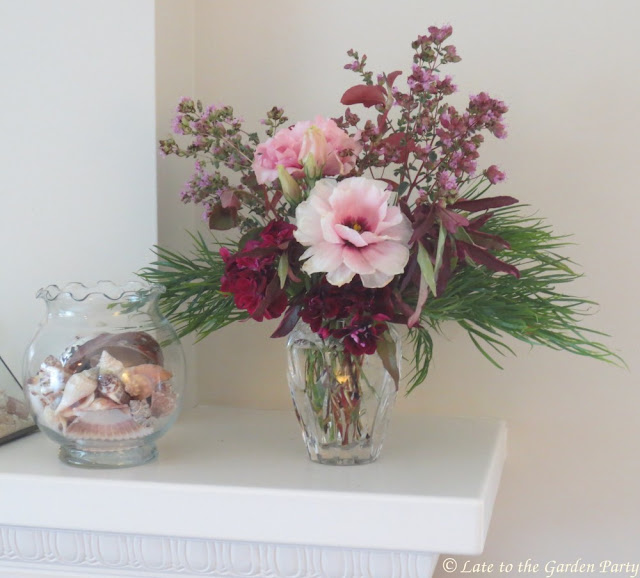 Pipig gets to relax in the air-conditioned comfort of the house as the heat intensifies today.  I have to head off into the heat for jury service, leaving my garden to its own devices. 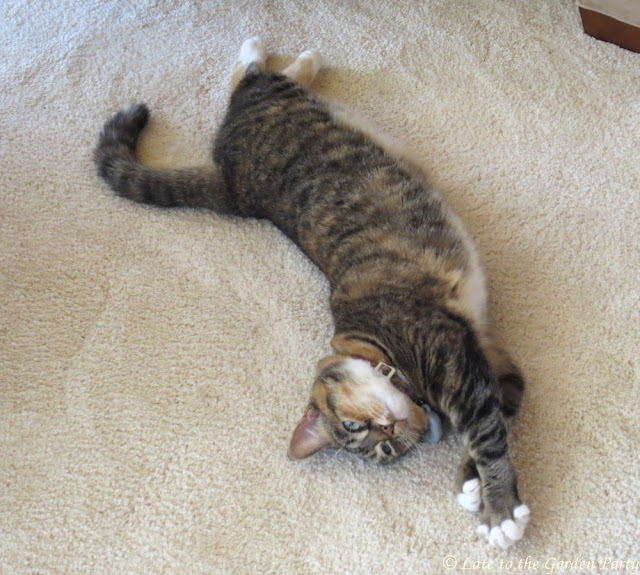 Visit Cathy at Rambling in the Garden to find more vases.