Gone but not forgotten

I had two large trees removed yesterday.  It was a necessity, not a choice, and it was painful.  In fact, it was more painful than the removal of our 60-foot Eucalyptus back in 2013 or the removal of one of our peppermint willows (Agonis flexuosa) in 2015, both of which were initiated in response to a neighbor's complaints about impairments to her view of the harbor.  Thankfully, that neighbor moved in 2018 but nothing can stop Mother Nature when she decides a plant's time is up.  Yesterday, we had both our mimosa (Albizia julibrissin) and the large tree-like toyon (Heteromeles arbutifolia) taken out.  The impact to the garden seems greater than any of the major changes we've made before.

The mimosa has been featured and discussed here many times but, before I summarize what happened to it, let me share a couple of photos of it at its best.

The tree's decline was readily evident by 2018.  Shot-hole borers had damaged major limbs, which didn't properly leaf out.  After discussion with an arborist, we performed major surgery on the tree in an effort to extend its life.  We gave it almost three more years but, this year when it came time for our annual tree service visit, we decided it was time to let it go.

It's a tree I've had a love-hate relationship with almost since we moved it.  While it was beautiful when it was in full leaf and flower, it was bare much of the year.  It also created a huge amount of litter and self-seeded with abandon.  Even so, I couldn't bring myself to watch much of the removal process.

The middle of the garden seems very empty to me and, although my husband is currently opposed to putting in another tree or even a large shrub in that spot, I don't personally feel the view that it's removal reveals is worth the feeling of exposure it creates.  But that's a discussion for another day.

The toyon's case is different.  Although like the mimosa it came with the garden, it's not a plant I gave much thought to until the middle of this year when I noticed that its leaves were turning red and what few berries it had were shriveled.  I found one source that suggested that this could happen with native plants like Heteromeles arbutifolia but by August it was clear to me that the huge shrub was dead.

Like the mimosa, the toyon sat atop a fairly steep slope but in this case it was adjacent to the property line, looming above the driveway of our neighbors on the south side.  There was no question that it needed to be removed but, as grinding the stump in that location was problematic for a number of reasons, I was apprehensive about opening up this particular view.

I'm thinking of ways to screen out the facade of the neighbor's house and those scruffy trees.  I'll cover that in more detail at another time too.

In the good news category, the other trees we had trimmed look spiffy and the collateral damage associated with their annual haircuts was relatively minimal.  We didn't have any of our peppermint willows trimmed this year, nor any of the smaller trees or the citrus trees.

That's it for me this week.  There's a LOT for me to do in the garden in the coming weeks (and months).  Unfortunately, our temperatures are slated to rise again with yet another, hopefully less forceful, round of Santa Ana winds in the forecast even as fire crews are still working to fully contain the two wildfires that broke out in Orange County earlier this week.  I'm looking forward to reliably cooler weather - and rain of course - but at present I'm not sure when we can expect either.

Wednesday Vignette: I've got the blues

It's a weird time.  Election day in the US is less than a week away and, although I voted early, I'm anxious to reach the end of the long, tumultuous period of political grandstanding.  Yet, the election itself may prompt another round of ugliness.  I'm sometimes tempted to take shelter as one does in an earthquake, close my eyes, and pray for it to be over without a tragedy of some sort.  In the garden, I've got two large trees, one dead and one nearly so, scheduled for removal tomorrow, and I'm apprehensive about the impact there.  And it didn't help that this week's latest bout with Santa Ana winds triggered two more vicious wildfires in Southern California, neither of which is anywhere near containment.  A flurry of firework displays last night, sparked by the Dodgers' win in the World Series, intensified my fire-related anxiety.

Despite once again contending with poor air quality due to smoke, I've spent time in the garden off and on since the fires started early Monday morning.  What I noticed in the back garden in particular was the prominence of blue color.

The bush violets, Barleria obtusa, immediately draw attention.  The plants started blooming a couple of weeks earlier than usual this year and appear to be in full bloom now.

The bush violets aren't the only blues present in the back garden.  In addition to the nice flush of dark blue Eustoma grandiflorum, Salvia leucantha, Trichostemma 'Midnight Magic' and Brachyscome 'Brasco Violet' are still blooming but it's the Chihuahuan Sage, Leucophyllum laevigatum, that's giving the bush violets a run for their money.
Duranta repens and Salvia 'Mystic Spires' are also adding light touches of blue color in spots throughout the garden, back and front.
The front garden has the blues too.

Blue in the garden is great.  However, feeling blue isn't.  I'm hoping the change I've been sensing in the country is real and that, once the dust settles, November will mark a positive shift in the national dialogue.

In a Vase on Monday: Oops!

I hadn't intended to go overboard on floral arrangements again this week but I started clearing out my cutting garden and, rather than dispatching with some perfectly presentable dahlias and zinnias, I cut a lot of them.  When I was done with that, I gathered other materials from the larger garden to serve as fillers and I ended up with this: 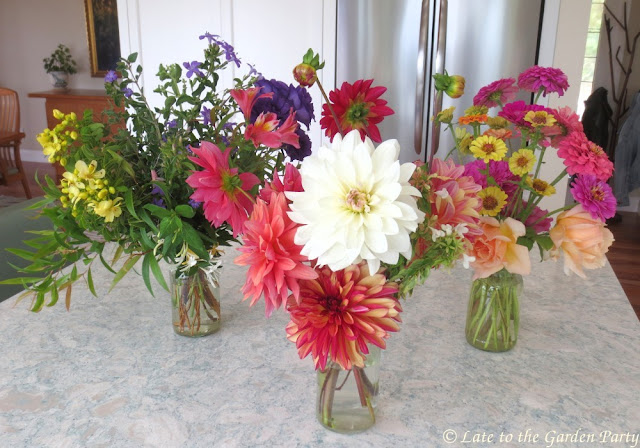 My process of composing an arrangement is usually very different.  I pick a bloom as my inspiration and wander the garden to search of suitable companions so, when I bring in a jar of plant materials into the kitchen, all that's left to do is to choose a vase and arrange the contents.  This time, I had a hodge-podge of loosely-connected materials to pull together into something, or rather several somethings.

Vase #1 was inspired by two 'Belle of Barmera' Dahlia blooms and a couple of late blooming roses.

Vase #2 is a rehash of one of last week's arrangements.

Vase #3 is also a version of one of last week's vases, fashioned to show off the last 'Iceberg' Dahlia.

Vase #4 was all about the purplish zinnias.
I expect to have cleared out all the mildewed zinnias and all the dahlias with the exception of 'Gitts Crazy', 'Labyrinth' and 'Rancho' within the the next couple of days.  I'll be sowing seeds and planting bulbs for my cool season flowers soon afterwards but I expect my choices for future flower arrangements will be limited for the next two to three months.
For more IAVOM creations this week, visit Cathy at Rambling in the garden.

I stopped by South Coast Botanic Garden again two weeks ago.  Actually, "stopped by" is a misnomer as advance reservations are still required, along with masks and social distancing.

My main purpose was to check on the Dahlia Garden but I took a general look around to see what's been going on since my visit in late July.  What follows are the highlights of my one hour tour.

The Dahlia Garden sits directly to the right of the area under construction shown above.  The area surrounding it has changed dramatically since my last visit.

Additional dahlias had been planted to fill areas of the raised beds that had been empty on prior visits.  Unfortunately, many of the older plants were well on the road to decline.  I photographed the best of what the Dahlia Garden still had to offer at the time of my visit.

Exiting the Dahlia Garden, I continued my rounds, starting with the Volunteer Garden. The volunteers themselves are still on hiatus, awaiting guidelines to cover their recall.

I only covered the front third of the garden before I ran out of time and headed back in the direction of the exit, snapping a few more photos on my way.

My last shot was taken in the parking lot as I walked to my car.

Best wishes for a colorful weekend!  We have a slight chance of light rain in the forecast at intervals through Monday but it's nothing to bank on at this point (although that doesn't mean my hopes haven't been raised).