I have to thank Loree of danger garden for hosting a review of the plants that win favorite status each month.  At the end of summer in Southern California, it's hard to avoid looking at the garden with a jaundiced eye.  Entering the garden for the purpose of identifying what's looking good shifts the paradigm.  Yes, there's another dead Leucadendron and many plants are stressed by our current heatwave, but there are still a lot of plants delivering on the promise they held when I planted them.

The succulents generally pull their weight regardless of the weather so I don't always give them the scrutiny the shrubs and perennials get but a few did warrant attention this month.


Visit Loree to see what earned her notice and that of other meme participants this month.

The heat is on

After a couple of weeks with cool, fall-like weather, the heat turned up again last weekend.  Actually, by comparison to Monday and Tuesday, the weekend was tolerable - it was at least possible to work outside in the early morning and late afternoon.  But, on Monday, the temperature here reached 102F (39C) and, even with humidity in the single digits, it was miserable.

Despite my best intentions to hold off on any fall planting for awhile yet, I'd fallen prey to a pretty new aster, Symphyotrichum chilensis 'Purple Haze'.  I planted it only days before the heat struck.  On Sunday, even before the heat reached fever pitch, I noticed that the plant appeared to be melting under the sun's intensity.  I gave it an H
2O infusion and used a broken umbrella to give it temporary shade.  It helped - I think the plant will survive.

On Monday, I didn't even venture outside until late afternoon when a fire truck appeared just down the street.  I saw the firemen speaking to a neighbor before their truck roared off, its sirens blaring.  I went outside and immediately noticed the tell-tale smell of smoke.  We live in a high fire-risk area so any sign of fire is a frightening event.

As it turned out, a downed power line started the fire, 3 doors down from us behind a neighbor's home.  After some initial difficulties accessing the area, the fire was rapidly extinguished without damage to structures or life.  We joked cynically about whether our power (and air-conditioning) would be cut off next (outages are remarkably common here) and, sure enough, less than an hour later, our power shut off.  The outage was shorter than most of those we've experienced since moving here - less than an hour - and we ran our air-conditioner late into the evening.

Temperatures remained in the mid-to-upper 70s overnight and the power went out again.  I was up extra early Tuesday morning and ventured out to check the garden before the heat climbed back to stratospheric levels.  With no marine layer and a scattering of clouds, I caught the nicest sunrise I've seen in a few months, perhaps the only upside to the current heatwave.

As soon as the sun was up, the temperature jumped again.  I spent yesterday darting from air- conditioned house to air-conditioned car to air-conditioned buildings and back again.  Still, Tuesday was nominally cooler than Monday and today is expected to be cooler yet.   Temperatures are forecast to be near "normal" again by the coming weekend.  I'm hoping the forecast is correct.

In a Vase on Monday: Eustoma grandiflorum keeps on giving

For a couple of weeks it seemed as though fall had arrived, ahead of schedule no less.  But a high pressure system moved in over the weekend, bringing the notorious Santa Ana winds in tow, and our temperatures zoomed back up to summertime levels.  Even though summer is intent to go out kicking and screaming, there are still signs that fall has arrived.  Nighttime temperatures are significantly cooler and the cruise ships are back in the harbor.

However, as the high temperatures are expected to extend through the early part of the week, cutting flowers for "In a Vase on Monday," the meme hosted by Cathy of Rambling in the Garden, became something of a rescue operation.  This week I'm more likely to regret what I didn't cut to fill a vase than anything I did cut.  The flowers of Eustoma grandiflorum (Lisianthus), which has been mounting a come-back, were among the first to get snipped.

There are a few stems of the blue-flowered Eustoma in bloom but I thought they would overpower this vase so I left them in the garden and will hope for the best.  I stuck with softer colors:

The last Eustoma I planted in June are finally coming on.  Sold as Lisianthus 'Cherry Sorbet', they're a dark, moody pink.


A few stems of the pale pink Eustoma also made a comeback but, after clipping them, I decided they didn't do anything for my second arrangement so I put them in a small vase on the bedroom mantle.

The first vase landed on the dining room table. 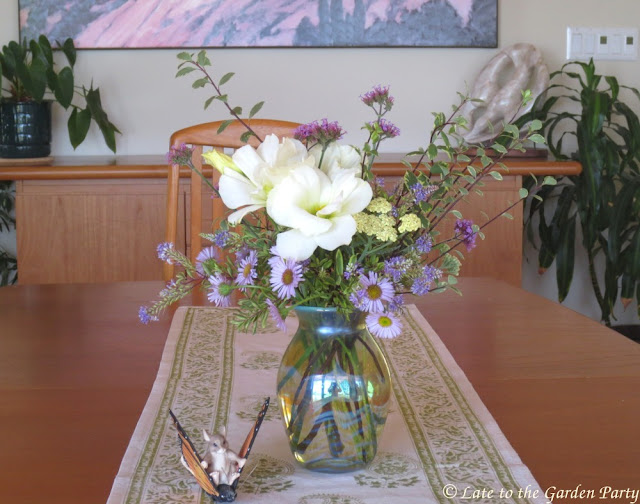 And the dark pink arrangement sits on the table in the front entry. 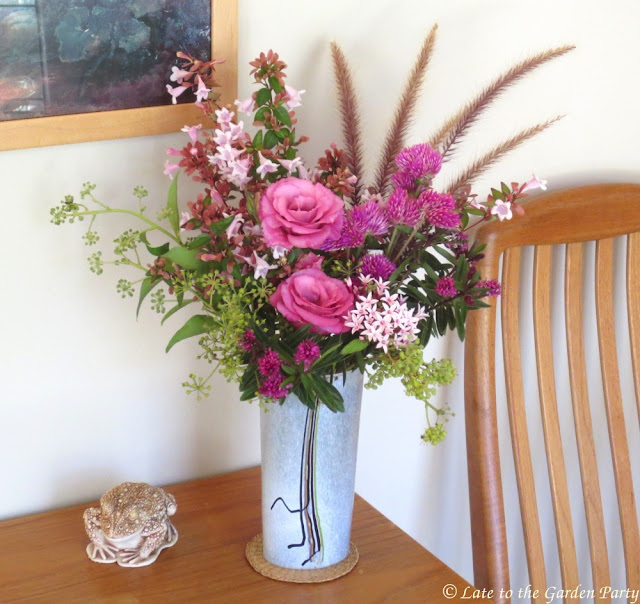 Last weekend I took a quick trip to my local botanic garden to take a look at the orchid show and sale they'd advertised.  I spent less than an hour there so I can't claim I made a thorough study of the specimens on view but I do have some photos to share.  Here are some of my favorites (all from the local orchid society's show area):

And here are some of the winning entries among the amateur growers' submissions:

Of course, there were deals to be had in the sale area and I had to bring a couple of orchids home.


I'm not very attentive to my orchids but they're surprisingly forgiving plants.  My collection seems to be expanding.

Today's Wednesday Vignette was a lucky catch.  I was sitting at my desk late yesterday afternoon and looked up to see a hawk gliding gracefully over the harbor.  He surprised me by landing at the top of the neighbor's tall pine tree.  I grabbed my camera and headed for the backyard, even though I expected that he'd fly off before I could get out the door.  He hung around for just one shot, although I did manage a second as he flew off into the distance.


While on the bird theme, I'll also share a few photos of finches enjoying a pool party in the fountain.  The still photos are a poor substitute for a live view but you can get some sense of the birds' enjoyment of their bath.  Birds splashing in the fountain always puts a smile on my face and a song in my heart.

For other Wednesday Vignettes visit Anna at Flutter & Hum.

In a Vase on Monday: Berry good

I headed into the garden with one idea as to what I wanted for "In a Vase on Monday," the popular meme hosted by Cathy at Rambling in the Garden, but I came back with something entirely different.  Unlike Cathy, I don't usually do much with props but today's vase did bring one thing to mind: breakfast!

Unfortunately, I was hungry so I ate my prop before arranging my vase but here it is, prop-less:

I hadn't planned on using Eustoma grandiflorum (Lisianthus) this week, at least not the blue or pink forms, but the flowers I initially cut needed something to punch up the arrangement so in they crept.

While the vase shown above featured berry colors, it didn't include any actual berries.  I remedied that with a second vase.  Simpler than the first, it has only 3 ingredients.

As other participants in this meme have commented, this meme can become addictive.  Every time I consider skipping a week, I ask myself if I really want to go without flowers and/or foliage of some kind on my dining room table and, once I walk into the garden, the process takes hold and I find myself clipping a little of this and a little of that.  So here we are, two vases to brighten the week:


Visit Cathy to find what she and other participants have gathered from their gardens this week.