Pleasant surprises (and a Wednesday Vignette)

Unless I have a very early appointment, I usually stroll through the garden every morning.  My most common discoveries are uprooted plants and holes dug by raccoons, skunks or squirrels.  But occasionally I have a pleasant surprise.  This was one: 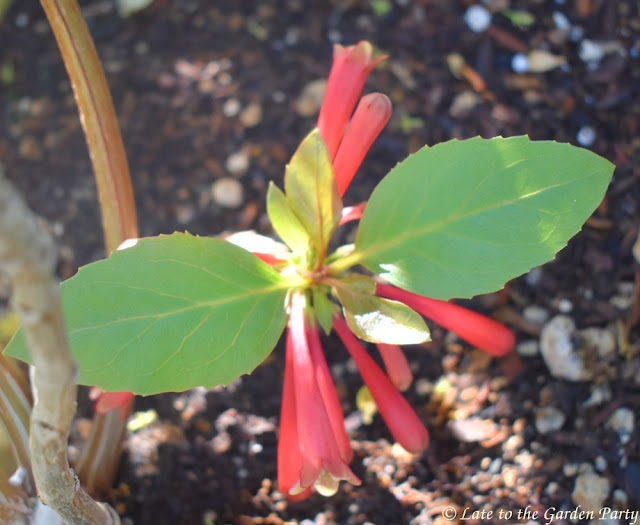 This is a flower on Dermatobotrys saundersii, a plant I picked up at The Huntington Garden's fall sale in late October.  I placed the plant in a large pot in a moderately shady spot in my new bromeliad garden early this month.

During the last heatwave, I noticed that it'd dropped a large number of its leaves.  I wasn't sure if that was a response to the heat, the sharp drop in humidity, too much shade or too little, or watering errors on my part but the leaves continued to drop and I feared I'd killed the plant.  Then it began to produce flowers and show the first signs of producing new leaves.  Hurrah!

But those weren't the only flowers that came as a surprise.  There are a few more.


To top things off, as I was taking photos this morning, I ran into a visitor.

I also left a surprise for my neighbors this morning.

In a Vase on Monday: Maybe I just need bigger vases?

Last week, I rued the fact that I'd crammed too much into my vases, yet this week I've once again stuffed them to the gills.  Apparently, I can't help myself.  Looser arrangements usually show off the individual components to better advantage but somehow I always cut more than I need during my Sunday rounds through the garden and then I find myself loathe to discard the excess.  So now I'm thinking: maybe I just need bigger vases.

I'd planned to focus on succulents this week but then I realized that one of the faded 'Medallion' roses was just about a perfect match for the blooms of Grevillea 'Peaches & Cream'.  With those 2 elements, I was off and running.


Tagetes lemmonii (aka Mexican Bush Marigold and Copper Canyon Daisy) also had a heavy flush of blooms despite its partial shade location.  The unusual yellow and burgundy flowers of the orchid Oncidium 'Wildcat' set the color scheme for the second vase.


The problem with Tagetes lemmonii is its scent.  While I like it, my husband is bothered by it.  He says it makes him sneeze.  I've managed to create vases with small amounts of the flower without it bothering him but this vase contained more flowers than he could tolerate so it was banned from the house.

Rather than leave the front entry unadorned, I reused remnants of last week's busy blue vase.

For more "In a Vase on Monday" arrangements, visit our host, Cathy at Rambling in the Garden.

Sometimes you just have to look harder

With the persistent heat we've experienced since the fall season began, I'd assumed that I wasn't going to see any fall color here.  Not that coastal Southern California is known for its leaf color in the first place but October was more hot than not, causing leaves on most of my deciduous plants to go from green to brown without any flashes of yellow, orange or red in between.  Early November was blessedly cool but our Thanksgiving holiday this week was pronounced the hottest on record.  Still, it cooled off at night, which isn't usually the case during our summer heatwaves.  And, when cutting back the grapevine on the north side of the house, I found we had a touch of fall color after all.


This discovery sent me off on a scavenger hunt with my camera and I found a bit more leaf color here and there.


While I was out looking at foliage, I realized that I wasn't the only one on a scavenger hunt.


If you're out and about this weekend, I hope you find what you're looking for too!

Since the weather cooled at the end of October, I've been making up for lost time shopping for plants.  The weekend before last, a friend and I visited 3 garden centers in Santa Barbara County and last Friday I drove to Orange County to visit Roger's Gardens.  As I'd arranged to meet a friend down there for lunch, I didn't dilly-dally much with photos but I snapped a few things that caught my attention upon arrival.


Although Roger's opened its Christmas Boutique before Halloween, preparations for the event were still in full swing when I visited.

But scarier than any of the Halloween decorations that Roger's had on display on my prior visit in September, including the avenging angel... 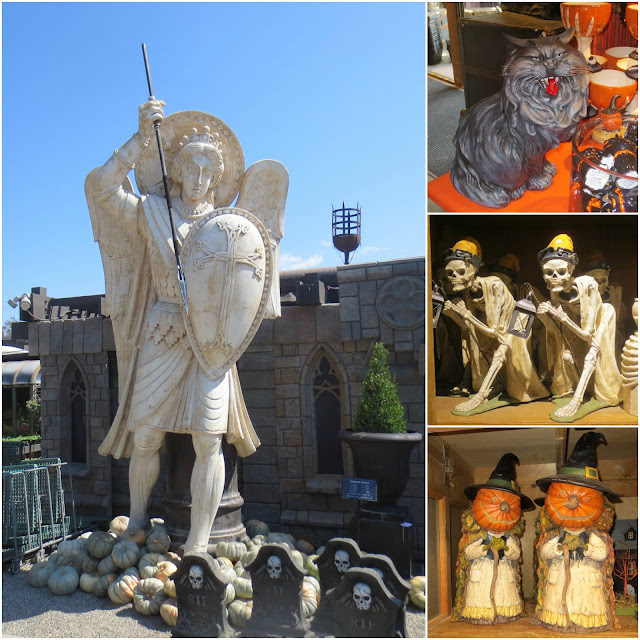 I didn't peruse the holiday displays.  I selected the plants I'd been looking for and several more I wasn't and high-tailed it to my lunch appointment.

More frightening still, I looked out my home office window Monday night and saw the first house in the area totally bedecked in lights.  How did Christmas sneak up on me yet again?!  Our temperature is expected to reach 90F today!  I haven't even thought about holiday greeting cards, presents, decorating or celebratory get-togethers.  I still have gardening to do!


I hope all of you in the US take time to thoroughly enjoy the Thanksgiving holiday tomorrow before facing down the specter of the year-end holiday festivities.  Best wishes!

In a Vase on Monday: Not simple enough

As I was preparing last week's Bloom Day post, I was surprised to discover that my New Zealand tea trees were sporting a heavy flush of pink blooms.  They were a natural choice for this week's edition of "In a Vase on Monday" in which Cathy of Rambling in the Garden challenges us to create arrangements from materials on hand.  The question I faced was: what do I have to accent these flowers?  I cut stems of Coprosma and Camellias but used only the latter.  Much as I love Camellias, in retrospect I think I probably should have let the Leptospermum stand alone.

As my bush violets are on the wane, I thought I'd also assemble another vase using them while I still could but the flowers were sparser than I'd realized so I ended up picking bits and pieces of a lot of other things to fill out the vase, creating a mish-mash.  I was pleased to find a one blue Lisianthus in bloom, though.


Both vases this week might have been more effective had I kept their contents simpler I think.  We'll see if I can manage to keep that lesson in mind next week. 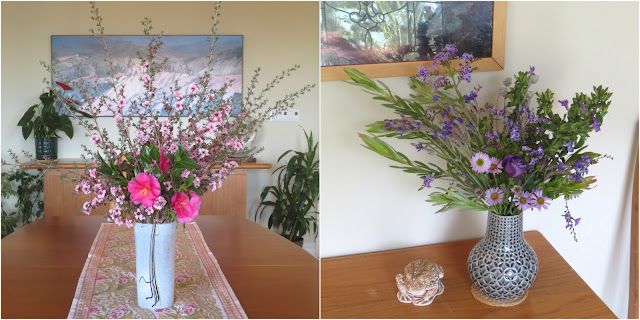 I recently posted photos of a dramatic change to the southwest corner of my garden resulting from a neighbor's removal of several large oleanders suffering from leaf scorch.  As plans were afoot this week to install replacement shrubs, I'd planned to provide photos of the newly installed Pittosporum hedge for this week's Foliage Follow-up, the feature hosted by Pam at Digging each month following Garden Bloggers' Bloom Day.  But, as the schedule for the planned installation stretched out, I began looking for a new topic.  I've been on a few fall planting sprees of late so I focused on some of my new foliage purchases.


Near dusk yesterday afternoon, the neighbor's garden crew finally finished work on the installation of the new hedge of Pittosporum tenuifolium 'Silver Sheen'.  The light wasn't great for photos but I'm going to include these anyway.


Our side of the property line is also a mess as work has finally begun on the lath (shade) house planned for the southwest corner.  While I've been slowly clearing out the pots and detritus that had accumulated in the area during the 7 years we've lived here, my husband has the hardest job: building the structure.  Thus far, only the footings are in place but that's progress!