Dahlias! (but they're not mine)

I made a reservation to visit South Coast Botanic Garden again this week, prompted mostly by curiosity over the progress of the Dahlia Garden.  I collaborated with two other docents and the then head gardener on restoring that area earlier this year.  We'd prepared the beds, ordered the tubers, and agreed on a layout before all volunteers were furloughed in March and the head gardener transferred to another LA County garden.  We handed everything over to other members of SCBG's paid staff and that was that.  During my June visit, I noticed that approximately half the tubers had sprouted but there were no blooms yet; however, recent newsletters sent to members revealed that some blooms have since appeared.
But let's focus on the pretty flowers.  We'll start with the plants in bloom in the left (east side) bed.

Only two of the plants in the central bed  were blooming and many still seem to be no-shows.
The semi-circular bed on the right (west side) wasn't completely planted for some reason.  With the volunteers gone, I suspect the shortage of garden help left the paid staff seriously stretched in addressing the needs of the 87 acre botanic garden and the ball on this project just got dropped.  A gardener I spoke to during my visit on Wednesday morning told me that some of the tubers had been planted in pots, which are currently in the greenhouse.  Here's what was blooming among the plants in the ground:
Because our planning group wanted to show the visiting public the wide variety of flower shapes, sizes, and colors available within the genus, the layout of the dahlia beds was a dicey proposition.  Our layout called for a zig-zag line-up based on gradations of color and size.  With many plants still no-shows, the rainbow effect we sought to create hasn't been realized, at least not yet, and the range of flower shapes isn't represented in the breadth we'd planned due to the number of plants still missing.  Plants grow at different rates and their mature sizes are subject to variation, which also complicates the planned symmetry of the beds.
Oh well, the handful of people I spoke to during my brief visit seemed to enjoy the flowers.  I think the informational posters we'd originally planned would still be helpful as I encountered a few people who'd guessed the flowers were chrysanthemums!
My own dahlias, which were planted MUCH later than last year's crop, are slowly budding out.  Hopefully, I'll have at least a few flowers soon.
I only spent an hour in total at the botanic garden.  Even though I arrived earlier this time, it was more crowded than it was during my prior visit.  It wasn't a problem to maintain social distancing and, with the exception of some small children, visitors and staff were all wearing masks but I felt on edge anyway.  However, I did cover a few other areas of the garden before I left.


That's it for me this week.  I hope you enjoy a pleasant weekend!

It's hard to remain hopeful these days when every newscast brings new reasons for worry - or anger.  I've tried to limit my news consumption but I still read and digest more than may be healthy on a daily basis.  My garden remains a refuge and, whether walking through it to water, pull weeds, deadhead flowers, prune rampant growth or simply snap photos, it manages to distract me, bringing my blood pressure down and clearing my mind, if only for awhile.
I thought I'd share a few of the casual distractions that caught my attention this week as my Wednesday Vignette, rather than enumerating the circumstances that had me climbing a wall.

I cut the peony's seedpod and planted those seeds in pots in the hope that at least one or two will produce a new plant.
Fingers crossed.  For more Wednesday Vignettes, visit Anna at Flutter & Hum.

In a Vase on Monday: There's always something

While I wait impatiently for my traditional summer blooms (dahlias, sunflowers, zinnias) to make an appearance, I shifted my focus to the flowers that make up the backbone of my garden.  Grevillea 'Peaches & Cream' is having a really good year and it provided the inspiration for my first vase this week.

Speaking of plants having a good year, the Amaryllis belladonna I introduced last week is having its best year ever.  Last year I think I had three bloom stalks but this year the flowers are dominating my back border.  This time I paired them with some of the last stems of Agapanthus.

Can you believe that July is almost over?  How is it that time still seems to pass so quickly even when each day feels much like the day before?  The future is still murky but I'm trying to focus on what I can control in my small corner of the world, like renovating a couple of garden beds to prepare for replanting this fall.  I'm hopeful that, in addition to changes to the garden, the new year will bring new leadership to guide the US out of the mess it's in and, if we're all lucky, a viable vaccine.
In the meantime, for more IAVOM arrangements created from floral and foliage material on hand, visit Cathy at Rambling in the Garden. 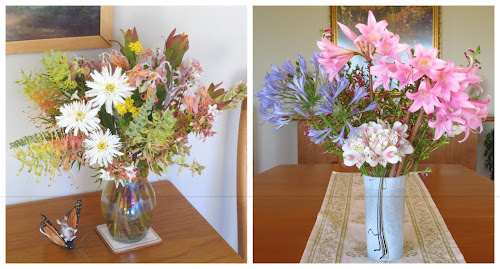 As I mentioned in a post earlier this month*, I try to avoid planting anything but succulents during the summer months.   I usually end up making some exceptions but this year I've thrown my "rule" out the window.  After all, I need to do something to keep myself sane.  This week I planted what I received in my latest order from Annie's Annuals & Perennials (my second this month), as well as plants I picked up from my local garden center.
I stopped by by my local garden center to pick up planting mix and to look for a flat of creeping thyme.  I left with more than I'd bargained for.
With one exception, I amazed myself by getting everything into the ground or into pots on a timely basis for a change.  I'll start with what went into pots.

Everything else went into the ground.

I'd absolutely no idea where I was going to put the Penstemons but finally settled on adding them to the back border.  The area I chose had recently been the resident gopher's favorite and, as I began digging, I dug right into one of his tunnels.  Because my sandy soil dries out quickly, I usually water the hole before placing a plant.  When the water disappeared immediately without ever filling the first hole, I realized it was running right through a gopher tunnel.  I decided it was time to try a new strategy.
So all that's left is to plant the creeping thyme, a time-consuming project (pun intended).  Hopefully, we'll continue to get a good morning marine layer to keep the temperatures down next week.  For July, we've been very lucky in the weather department.
Stay safe and enjoy your weekend!
*My earlier post entitled "Pandemic Planting" was originally posted on July 9th.  In trying out "New Blogger," I ended up republishing that post on July 24th.  Every new platform presents challenges and missteps it seems.   The current post took twice as long as usual but I got the hang of most things, except how the labels are supposed to work.
All material © 2012-2020 by Kris Peterson for Late to the Garden Party
Posted by Kris Peterson at 4:59 PM 23 comments: