Yesterday marked my fourth blogging anniversary.  Although it feels as if I've been blogging for no time at all, a lot has changed in my life and in the garden within that period.  I was amazed to find that I've published 690 posts, registered over14,000 comments, and racked up 597,965 views since I began.  I'm not about to slog through the garden's entire history here (much less my own!) but I thought a 2016 garden retrospective might be an appropriate way to recognize the anniversary.

More than any other subject, water - or the lack of it - dominated my focus in the garden this year.  In June 2015, after 4 years of drought, California adopted restrictions on water use.  The restrictions varied by location and water agency but my area was one of those faced with the severest limitation: a 36% reduction in water use vis-à-vis our 2013 rate.  As we started removing lawn and replacing thirsty plants almost immediately after moving in December 2010 and as we'd managed to reduce our water use 25% during the prior year in response to the governor's call for voluntary reductions, we had a head start in tackling the target.  In addition to adding 2 large rain tanks to the smaller one we already had, the last remaining strips of thirsty lawn went in January 2016.

Having done extensive replanting following the removal of the last of the lawn in both the front and back gardens, I'd hoped that the heavier-than-normal rains we'd been led to expect with the arrival of El Niño would help my new plants get established before summer's heat made life more difficult.

Despite all the warnings to prepare for a "Godzilla El Niño," it proved to be a total bust for Southern California, although Northern California received its benefits.  A stubborn ridge of high pressure kept the rain at bay here.  Our roof-top weather station registered only 5.65 inches of rain for the October 2015-September 2016 period (as opposed to "normal rain" near 15 inches).  Still, we were successful in staying well below our monthly water budget.  I used up the water collected in our rain tanks and I continued to replace thirsty plants with drought tolerant ones, flaunting some of my favorite combinations in blog posts.

The garden and I limped along fairly well with minimal rain and irrigation for months.  Then a horrific heatwave hit us on the first day of summer.  Minimal water meant that roots of recently introduced plants didn't go as deep.  The onset of intense heat after a relatively cool spring seared tender foliage.  We're used to heat but this heat was as devastating to us as the ice storms that afflict gardens in colder climates.  I lost some plants virtually overnight and others more slowly.


Most distressing of all, our lemon tree, which had provided an abundance of lemons continuously since we'd moved in, dropped two-thirds of its fruit within days.  What didn't drop rotted in place.  Fortunately, the tree has recovered since that heat apocalypse, although we've picked only one ripe lemon since June.

Although we had other heatwaves over the course of the summer and well into November, nothing was as awful that first event in June.  I focused on removing dead and dying plants, which included several Ceanothus shrubs that had made up a hedge running along the front slope.  I inherited these shrubs with the garden and they'd been in decline for some time - winter drought and summer's heat just moved things along.  Situated within feet of another hedge that runs along the street, they also created a funny tunnel of sorts.  In addition to removing the dying remnants of the Ceanothus hedge, I enlisted my husband's help in extending a dry-stack wall in the same area in late August.  When the final Ceanothus shrubs came out in early November, we brought in still more rock to stabilize the front slope.  Succulents and other drought tolerant plants went into the newly created beds.


In late October, I learned that a tree-hating neighbor who, despite our removal of 2 large trees and annual tree trimming, regularly threatened me with action under the city's "view conservation ordinance," had put her house up for sale.  She accepted an offer but, unfortunately for all concerned, it now appears the sale may be off.  For her sake and ours, I hope it's just a glitch in the escrow process.

In December, Christmas came early as Los Angeles recorded the wettest December in 6 years.  Although lower than "normal rain" (whatever than means anymore) was predicted this winter in connection with La Niña conditions, some forecasters have speculated that the stubborn ridge of high pressure that has prevented rain from reaching us in Southern California finally may be breaking down.  I don't want to get too excited yet, but I'm hopeful.  (It's raining again this morning!)

Despite the dry conditions and heat, my garden continued to pump out blooms, which I've shown off on my regular posts in connection with the weekly "In a Vase on Monday" meme hosted by Cathy of Rambling in the Garden.  Averaging 2 vases a week over 52 weeks, I've produced over 100 vases this year.  (I couldn't bring myself to actually count them.)  I'll close this retrospective with some of my personal favorites as they reflect my garden as well, or better, than any of the photos above. 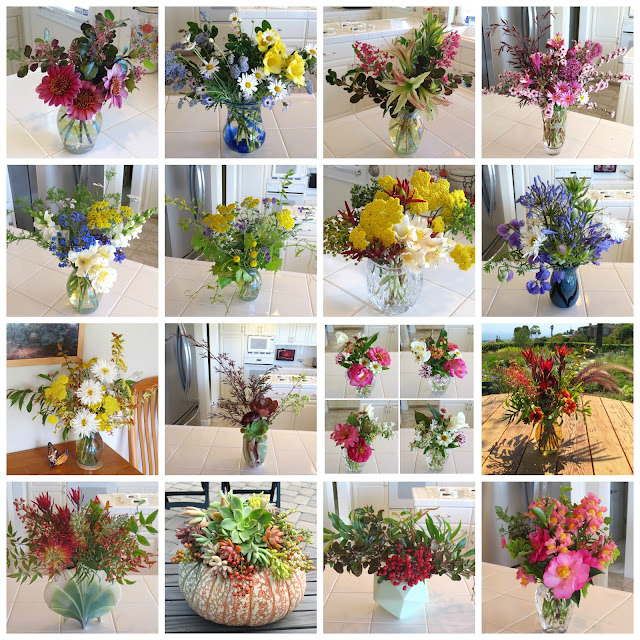 If you're a regular participant in the "IaVoM" meme, you may have noticed that none of the vases shown above contained Eustoma grandiflorum (aka Lisianthus), a plant I've become well known for using.  I didn't ignore those - I just thought they deserved their own collage.  Lisianthus bloomed in my garden from June through December this year. 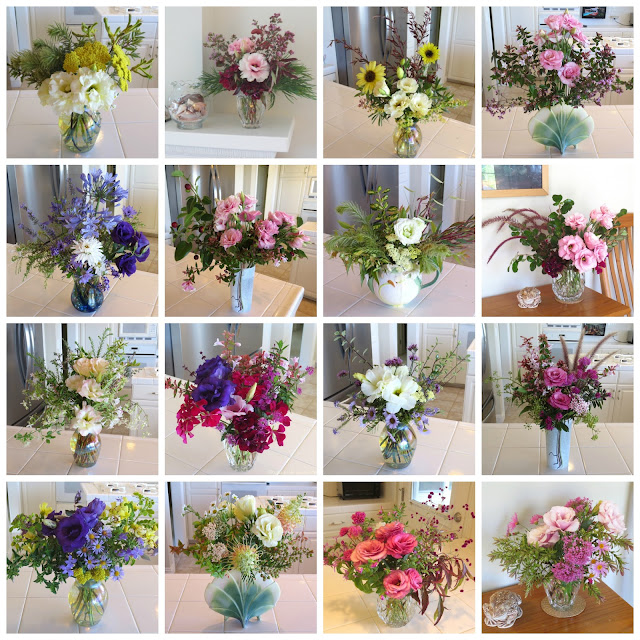 Thank you for doing me the kindness of reading my blog posts and for commenting when moved to do so.  It's you out there in the blog-sphere that really keep this blog going.  I hope you enjoy a wonderful New Year's Day holiday weekend!  What the future holds in 2017 seems unclear but I hope that peace, good sense, and kindness toward our fellow human beings will prevail.

For Christmas, my husband gave me 3 ceramic fish for the garden.  I've been trying them in various locations in an effort to find the best spot for them.  I remain undecided.  Here are some of the options I've tried so far:


Do you have a favorite?  Of course, I suppose I could just move them around as the mood strikes.

Note: My fish came from Fish in the Garden.

In a Vase on Monday: Going Pink

I got a new vase from a friend for Christmas so I had to use it but, between holiday festivities and the cold temperatures outside, I didn't spend a lot of time collecting materials to fill it.  The celadon green of the vase called out for a pink complement so I headed to the Leptospermum in full flower in the dry garden and clipped away.


I overestimated just how much I could cram down the throat of the new vase so out came vase #2 to contain the rest of what I'd cut. 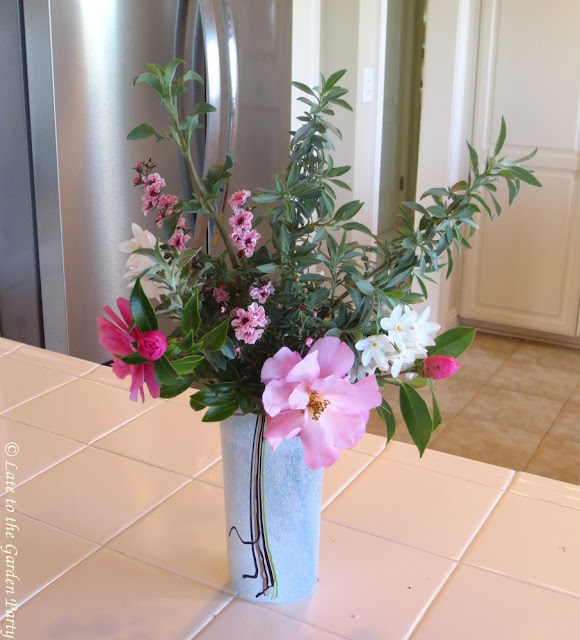 My biggest problem this week was finding spots for 2 fresh vases.  Christmas decorations take up a lot of room!  Last week's second vase wasn't long-lived but the other one was still in pretty good shape; however, I tossed out its contents anyway.  The vase on the dining room table, the one containing the orchid stem I constructed 2 weeks ago, was moved to my office.  The new vases ended up on the bedroom mantle and the dining table respectively. 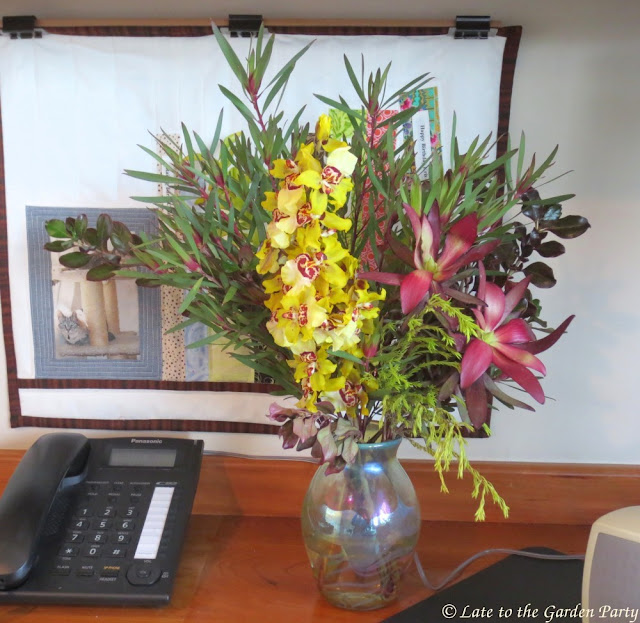 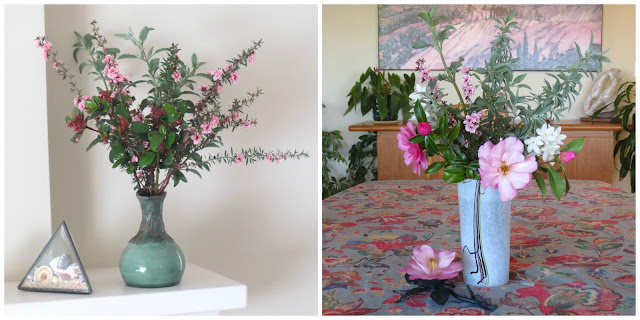 Enjoy the remainder of your holiday, however long that may be.  Our daytime temperatures are expected to warm from the mid-50sF into the mid-to-upper 60s by mid-week so I hope to get outside to do some gardening.  We have another good chance of rain on Friday.  Last week's storms have already given Los Angeles the wettest December in 6 years so another storm is icing on the cake.  Speaking of icing, here's a view of the mountains to the east from our back garden on Christmas morning. 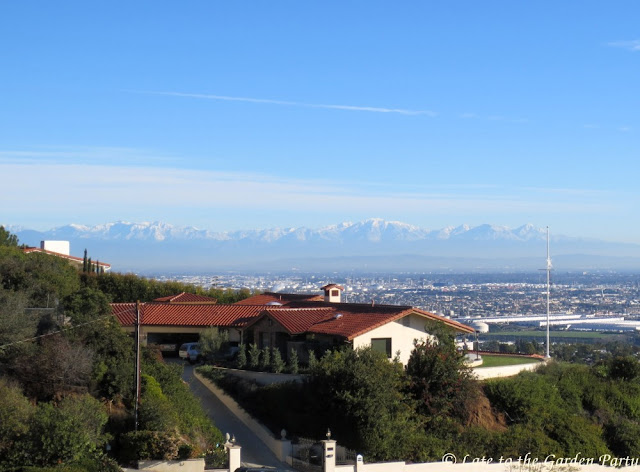 Best Wishes for a Merry Christmas!

The house is decorated outside. 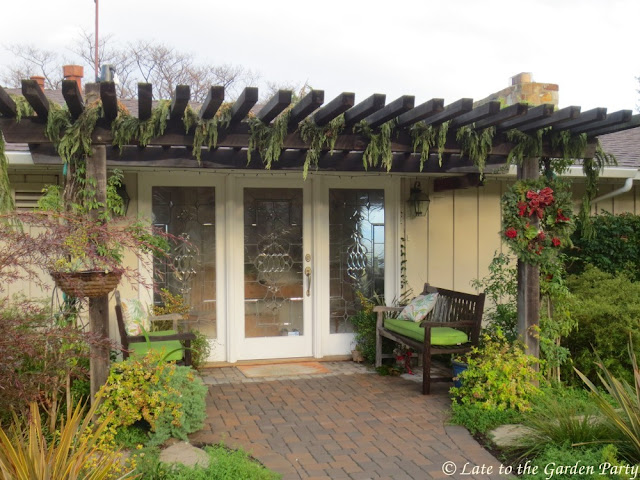 And the inside is decorated too. 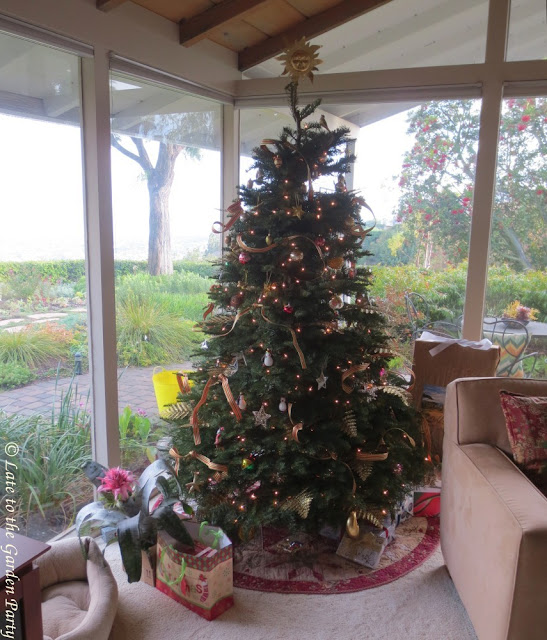 Pipig has staked herself out a snug spot under the tree. 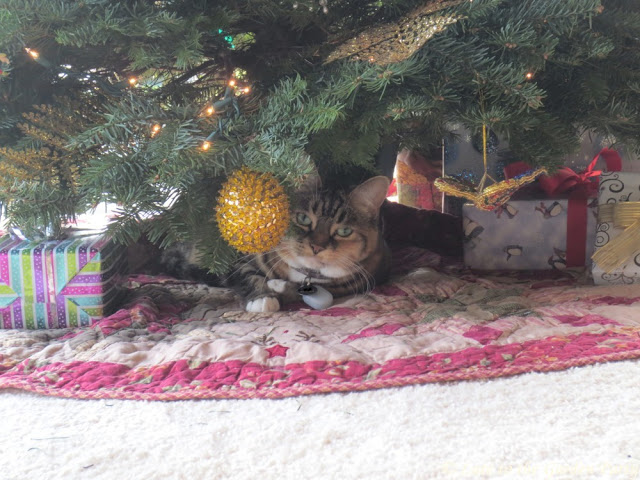 And my husband is occupied with a new project, calibrating our weather system's rain measurement accuracy.

Cards have been sent, presents are wrapped, the pantry is stocked, and I have a holiday lunch scheduled with friends this afternoon.  Despite the gloomy political scene, all seems merry and bright at the moment.

However you're spending the holiday weekend, I hope good cheer finds you too!

Moss makes me happy.  I don't know why that is but I'm always delighted when it appears in our garden.  Maybe it's a reminder of the rain that inevitably precedes its appearance.  Maybe it's that it asks nothing of me.  Or maybe it's that it covers bare stretches of dirt in bright, beautiful green.

It temporarily fills in the cracks between the paving stones that make up the large, otherwise barren space that is our driveway.

Moss isn't as common here as it is in rainier climates and it doesn't develop fat clumps as it does elsewhere.  It largely disappears once our cool, rainy season is over, although it hangs on in one spot in the front garden.

Ultimately, maybe it's just that moss heralds the new plant growth that comes with cooler weather here.  Even as winter has only now arrived, the appearance of the moss has me scouring the garden for the first signs of the promise of spring.  And there are some!

More on the wonders of moss can be found here and here.  Visit Anna at Flutter & Hum for more Wednesday Vignettes.

In a Vase on Monday: A different palette

With the holidays in full spin, time was at a premium this weekend so I didn't dilly-dally over the selection of flowers for "In a Vase on Monday" this week.  A little tired of the color palettes I've used the last few weeks, I focused on flowers in the violet-purple range and started snipping.  When I assembled everything in the kitchen, I decided that the materials I'd cut looked best separated into 2 separate groups so, once again, I have 2 vases.

Here's the first one:

And here's what went into the second, smaller vase:

The first vase landed on the bedroom mantle. 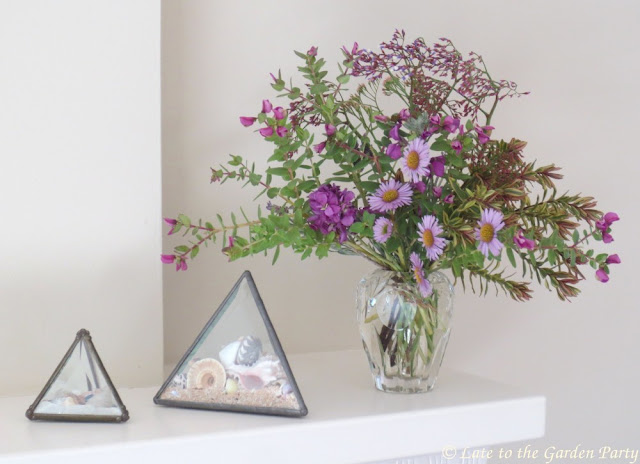 The second sits on my desk, where it received some unsolicited attention.

In any case, Pipig eventually got her heater back. 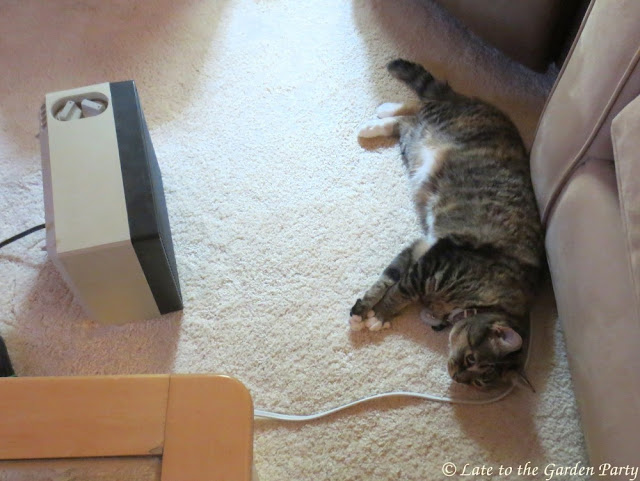 Best wishes to all of you gearing up for the holidays.  For more vases, visit our IaVoM host, Cathy at Rambling in the Garden.

As I'm in the middle of Christmas holiday preparations, red and green are front and center so it seemed only appropriate to focus on foliage in those colors for today's Foliage Follow-up post.

Some of the red-green color contrasts in my garden are simply the product of new growth.

Color changes in other plants seem to be associated with colder temperatures.


However, some succulents that turned red under summer stress shift back to green.