There was a time in my life, not all that long ago, when I somehow managed to prepare for the year-end holiday season in advance even while working 60+ hour weeks.  I kept lists of gift ideas for reference.  I shopped for gifts - in real brick and mortar stores - and tucked them away when I found just the right items.  I hand-wrote letters to include in cards, which I dropped into postal boxes for delivery weeks ahead of time.  I even baked cookies.  (Well, to be honest that really was a long time ago.)  So, how does it happen that now, year after year, the holidays sneak up on me?  I wasn't prepared for Thanksgiving and I'm sure as heck not ready for Christmas.  But there's no hiding from the fact that it's coming...

I hope you're more organized than I am.

In a Vase on Monday: Sunshine and Showers

We got MORE rain!  Maybe Mother Nature heard those of you in rainier climes who wished you could send your excess rain to the drought-stricken areas of California.  While I've no illusions that our drought is over, getting rain 2 weekends in a row is an extraordinary blessing and much appreciated.  My garden is thoroughly soaked; the irrigation system will be off for at least another week; and all 3 of my rain barrels are full, giving me 475 gallons of rainwater in reserve.  Even my car got scrubbed clean.  Yay!

The second of two weekend storms crept through Sunday morning, finishing up before noon here.  I strolled the garden and decided that it's time to cut back the massive gold Duranta erecta in the front garden.  I clipped a few stems as the starting point for this week's "In a Vase on Monday."

I wasn't sure what to pair with the acid yellow foliage of the Duranta and clipped a number of plants before settling on a direction.


The extra stems I clipped on my first round through the garden went into a second vase.  I pulled the vase out of the back of my cupboard, where it had been all but forgotten.  I bought it on-line earlier this year or maybe last year, thinking it would work well for succulent arrangements, but I don't think I've used it for those or anything yet.

It was just the right size to contain the cuttings I had left.

The sun came out in the afternoon.  The vases found their spots.  And, in the hour before dusk, the clouds moved and revealed snow in the mountains.  All in all, it was a great weekend.

The whole garden looks better and brighter since last week's rain so it was easier than last month to get excited about a few plants for the monthly favorite plants round-up hosted by Loree of danger garden.

Throughout the garden, the Aeoniums have lost their shriveled summer look and regained their luster.

The Barleria obtusa featured in my Bloom Day post is at the height of its floral glory.

My beautiful Callistemon 'Cane's Hybrid' is also blooming, not that it doesn't look good out of bloom as well.

Gomphrena decumbens 'Itsy Bitsy' has exploded with tiny blooms since I cut it back by half a month ago.

All my large-flowered Grevilleas are looking good but 'Peaches & Cream' has flourished since we took out a hedge that blocked its sun exposure on the west side.

Last but not least, Heteromeles arbutifolia, commonly known as toyon, is at its annual pinnacle, covered in berries.

For other favorite plant picks this month, visit Loree at danger garden.

Fall is widely regarded as the best time to plant in Southern California, although you wouldn't necessarily realize that scanning the stock available in local nurseries and garden centers.  Daytime temperatures are generally cooler and there's a promise of winter rain, both of which help plants get established.  I admit that I go a little crazy with plant shopping at this time of year and, despite periodic spates of ridiculously hot fall weather here and gloomy forecasts of low winter rainfall, this year has been no exception.  I've already featured the results of some of my plant shopping expeditions (see here and here) but there have been more so I thought I'd give you a peek at some of my other recent purchases.

I'd mentioned that I was considering a smoke bush for a difficult area on the south side of the garden, partially shaded by a large Arbutus 'Marina'.  I found one last month.  Although it wasn't in perfect condition when I bought it, it seems to be settling into its spot just fine so far.

I also picked up a Duranta erecta for the partial sun area behind the street-side hedge.

The Grevillea 'Scarlet Sprite' I added to my dry garden last year has done well so I decided to add 2 more plants.

The local botanic garden held another of its special fall plant sales, which a friend and I attended the weekend before last.  She left empty-handed but I did not.

On our way home, my friend and I stopped in at a clearance sale held at a small local nursery and I came away with yet another agave.

Late last week, I made a trip to a nursery in Huntington Beach in search of a Mahonia for the vacant spot in the area recently cleared of a dying hedge.  I left with the Mahonia and 2 other plants.

Is that all, you ask?  Nope.  Plants also arrived by mail!  The first delivery was a complete surprise.

I received advance notice of the second delivery.  Loree of danger garden contacted me on election night to say she had a Tetrapanax papyrifer seedling if I wanted it.  The offer, which I gratefully accepted, was the only bright spot in what proved to be a very depressing evening.  Her package arrived this week.

So, is that it?  No, but this post is long enough so it will do for now.  For those of you in the US, Happy Thanksgiving!

In a Vase on Monday: Fleeting Blooms

The big news from my corner of the world is: WE GOT RAIN!  Honest-to-goodness rain, not Mother Nature's spit, which is all we've had of late.  I know that those of you in wetter climates may be rolling your eyes but this is a big deal here.

Even though rain was predicted, it's hard to put any faith in forecasts when one after another fails to materialize.  I'd planned to spend Sunday in the garden planting recent purchases but, when the skies became auspiciously gloomy, I decided I'd better cut some flowers for "In a Vase on Monday" just in case the forecasts proved accurate for once.

I fixated on 2 flowers that appear only briefly in the garden.  The first is Hypoestes aristata, also known as ribbon bush.  I grew this plant in my old garden, where it was a vigorous fall performer.  I kicked myself for failing to bring cuttings with me when we moved as it took me years to find the plant afterwards.   When I located a mail order source last year, I planted 3 tiny shrubs, only one of which survived the sunnier, hotter and drier conditions of my current garden.  My remaining plant is still small and has only a few blooms but I cut a single stem and then went looking for other plants to complement it.


The other flowering plant I couldn't ignore this week is Callistemon 'Cane's Hybrid'.  This shrub, planted in March 2015, produces periodic flushes of bloom but the flowers disappear almost as soon as I notice them.  I clipped 3 stems and took another spin through the garden seeking suitable companions.


The vases found their places.  For more vases, visit Cathy at Rambling in the Garden, our host for "In a Vase on Monday." 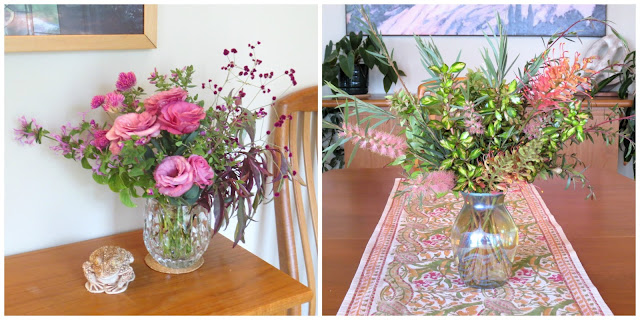 Retrieved from the cutting room floor

It's gotten so I grab my camera every time I see something I think is pretty or that I find amusing.  Most of these photos never see the light of day but this week, in need of something to cut the edge of gloom that accompanies every newscast, I decided to publish a random collection of images that caught my attention this week.

I hope you enjoy your weekend!

Earlier this month, I posted on the removal of the last remaining portion of the deteriorating Ceanothus hedge we inherited with our garden.  Not one to leave any ground bare for long, I began preparing the area for planting within a week of clearing it.  The first step involved bringing in yet another batch of what the local stone yard refers to as "small boulders" to hold the front slope.  The next step was to dig out and divide the large mass of Agapanthus.  Shopping, mostly for succulents, was also involved.  Although I expect to do some tweaking, I've completed my first pass at redesigning the area.

For reference, here's another photo of the area after the hedge was removed but before it was replanted:

And here's a look at it after replanting:


Not all the plants came from garden centers.  In addition to dividing the Agapanthus into 3 smaller clumps, I transplanted plants taken from elsewhere in the garden.

I also took cuttings of succulents I had elsewhere.

And here are the plants I purchased:

Most of these species were purchased in multiples and I've already picked up a few additional succulents that don't appear in my photos so, as I said, tweaking will continue.  I considered dressing the lower area with gravel but the sloping surface presents a challenge so I'm leaning in the direction of adding more small-leafed succulents as ground cover.  There's a large space just south of the variegated Echium that needs to be filled too but I haven't settled on the right thing to complement the surrounding plants yet.

As we brought home 860 lbs of rock from the stone yard, I still have about 360 lbs of rock to use elsewhere now that I'm mostly done with this area.  I'm waiting for the cricks in my back to smooth out before I get started with that.  The work that's already been done will stand as my Foliage Follow-up post this month.  For more foliage selections, visit our host, Pam at Digging.