This past weekend I attended the yearly Spring Garden Show held at a prominent Orange County shopping mall.  I reported on the display gardens here.  Whereas in the past I was able to draw some ideas from these displays to apply in my own garden, that hasn't been true recently.  Disappointed in the displays, I was nonetheless able to find solace in shopping for plants and related items on the top 2 levels of the mall.  Some vendors I enjoyed seeing in prior years were missing (there were no rusty welded metal items to admire!) but I still came away with a lighter pocketbook.

As the event is held a few weeks prior to Mother's Day (observed in the US on the second Sunday in May), there were lots of items designed for presentation as gifts, including more fairy garden displays than you could count, African violets, terrariums, and orchids of all kinds, shapes and sizes.  In fact, orchids occupied roughly half the space on the third floor of this mall. 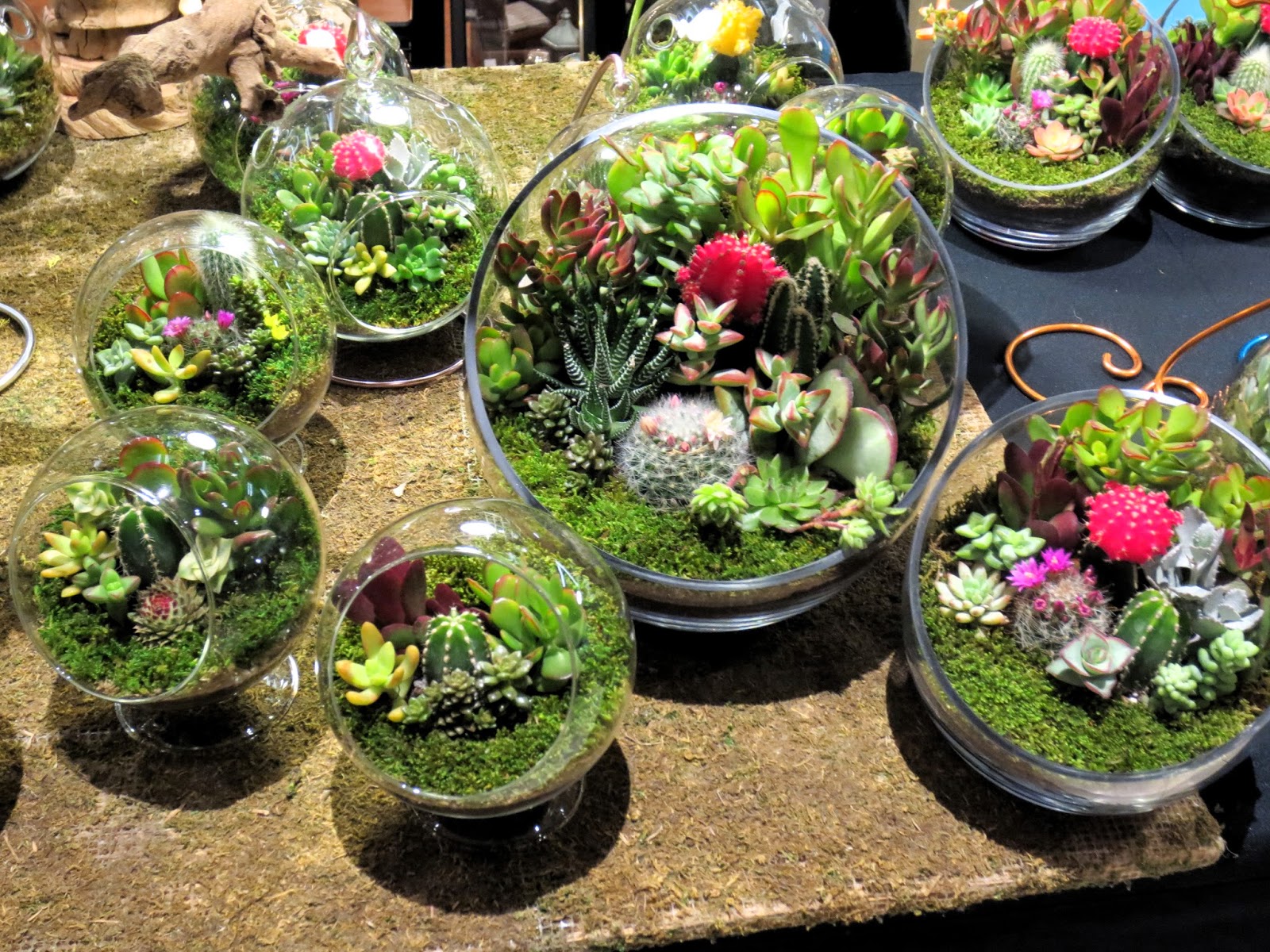 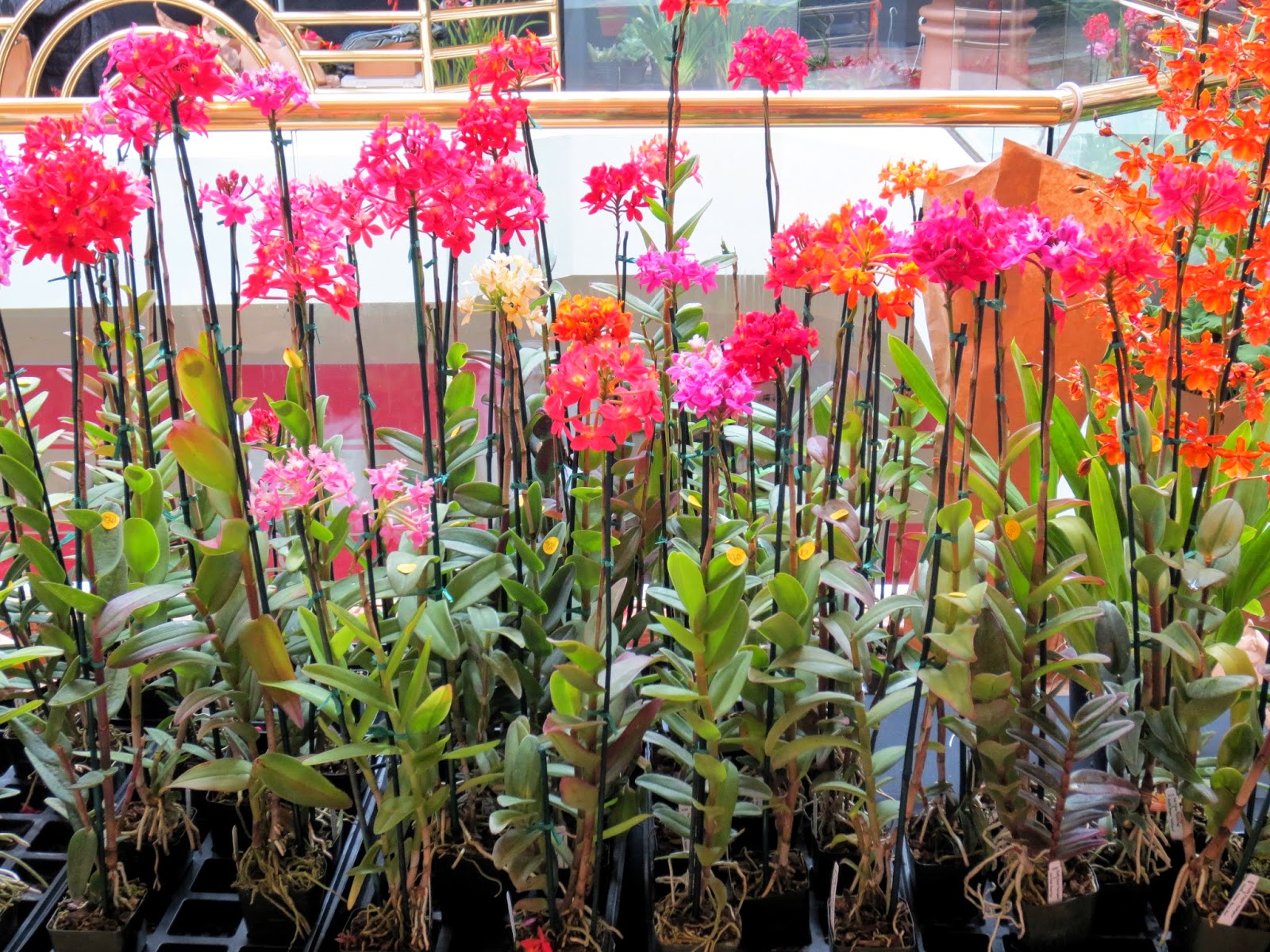 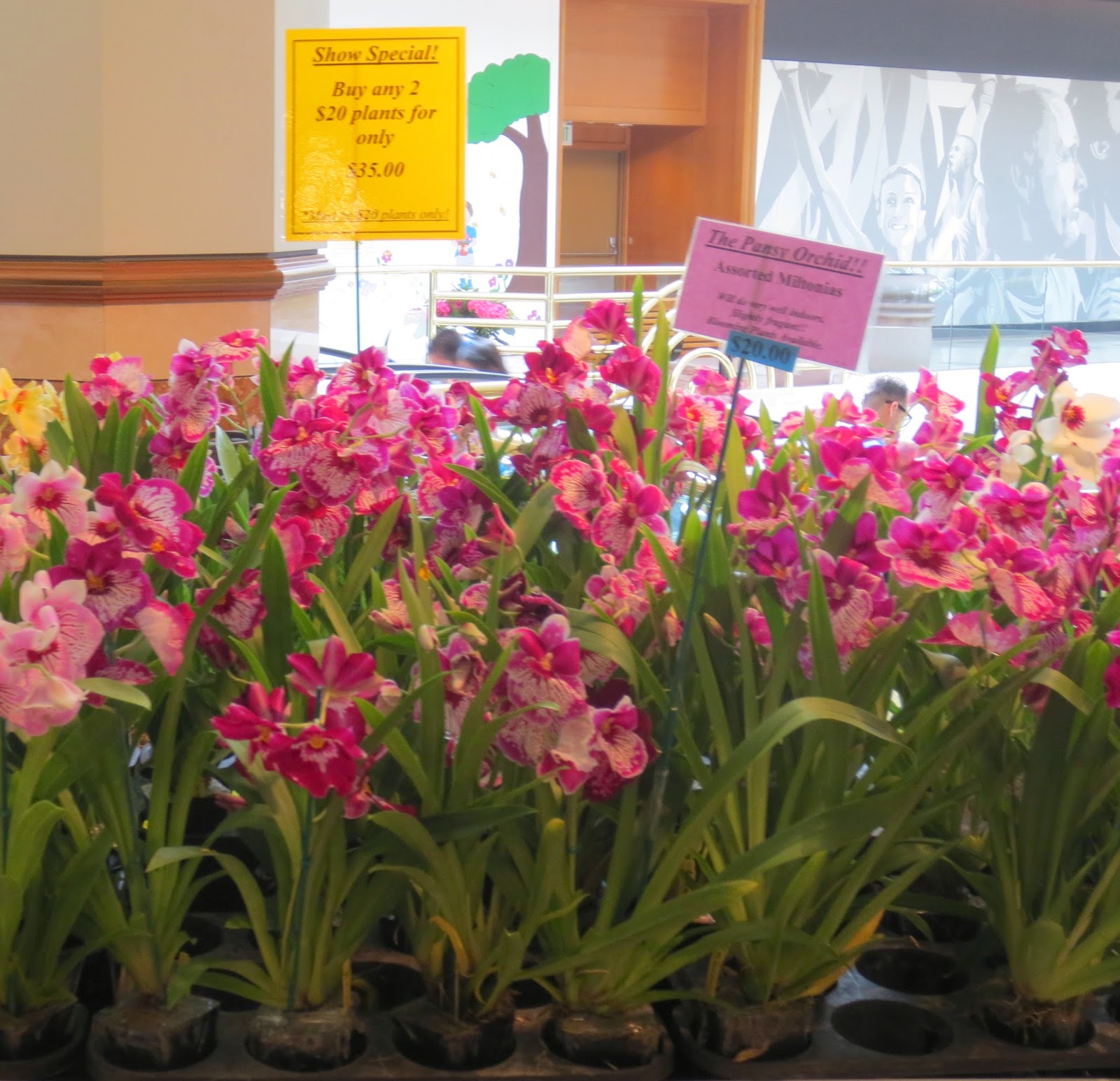 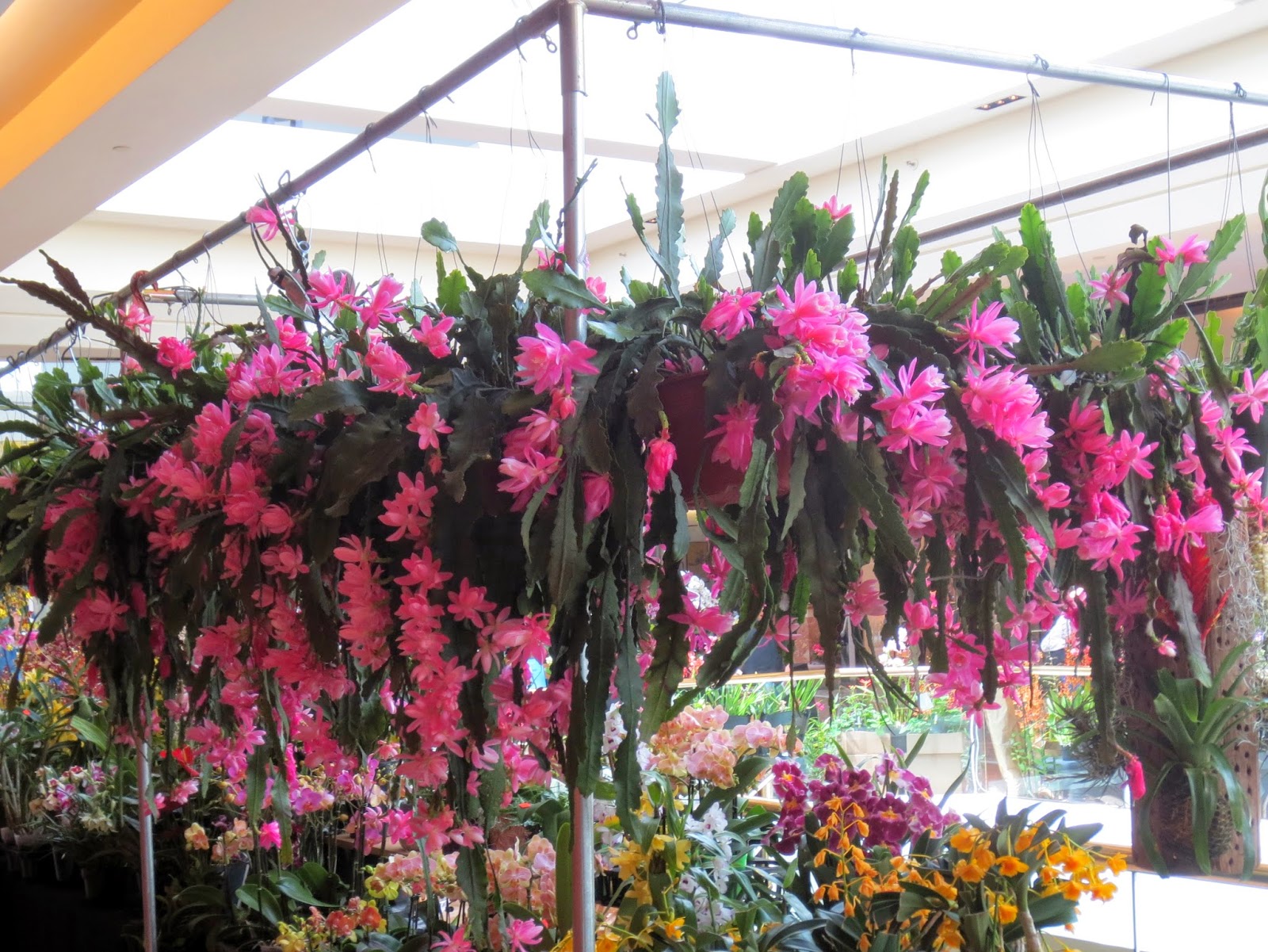 I was more interested in the landscape plants and succulents. 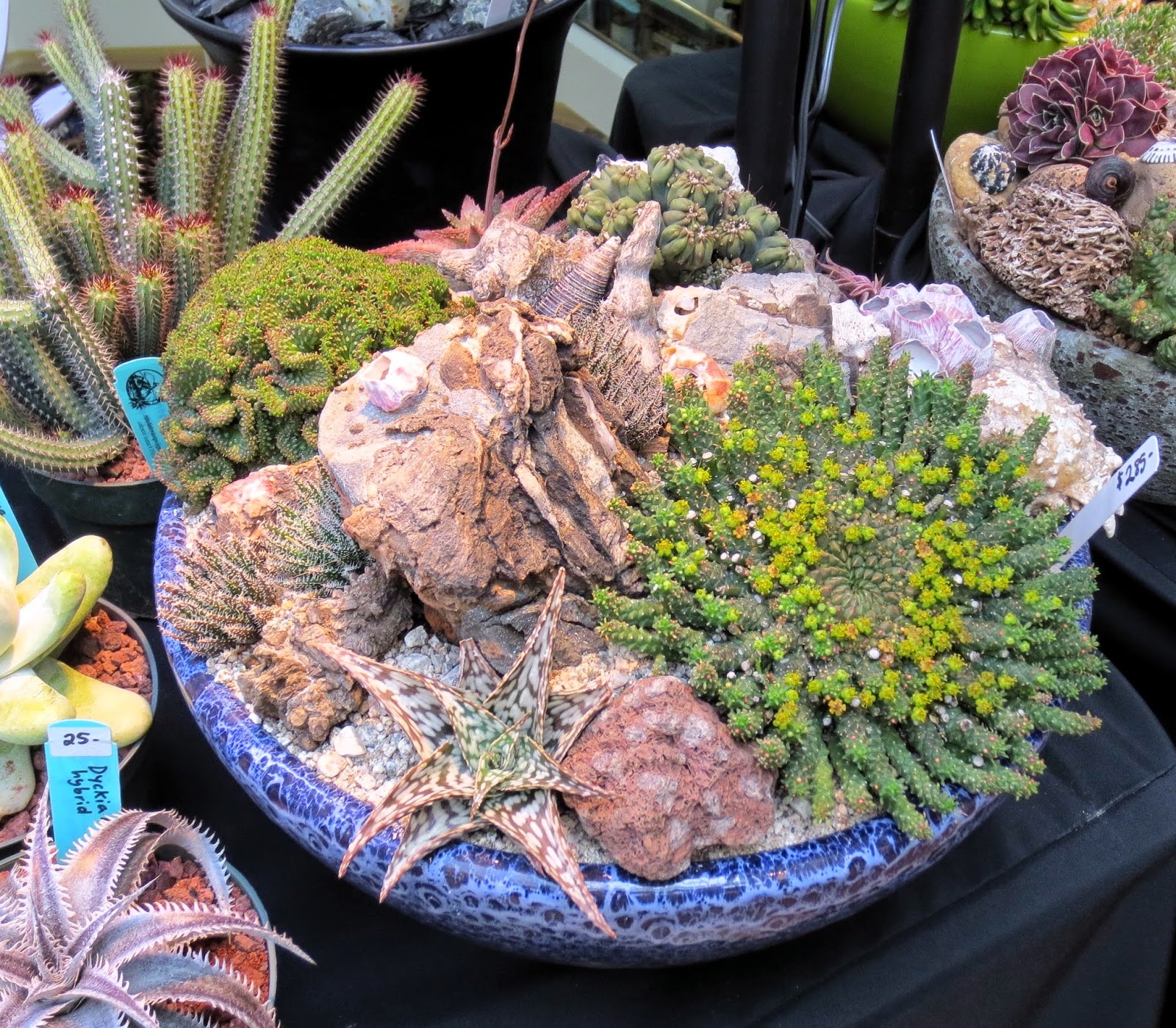 There were lots of specialty items as well.

There were more vendors selling pottery this year than in years past. 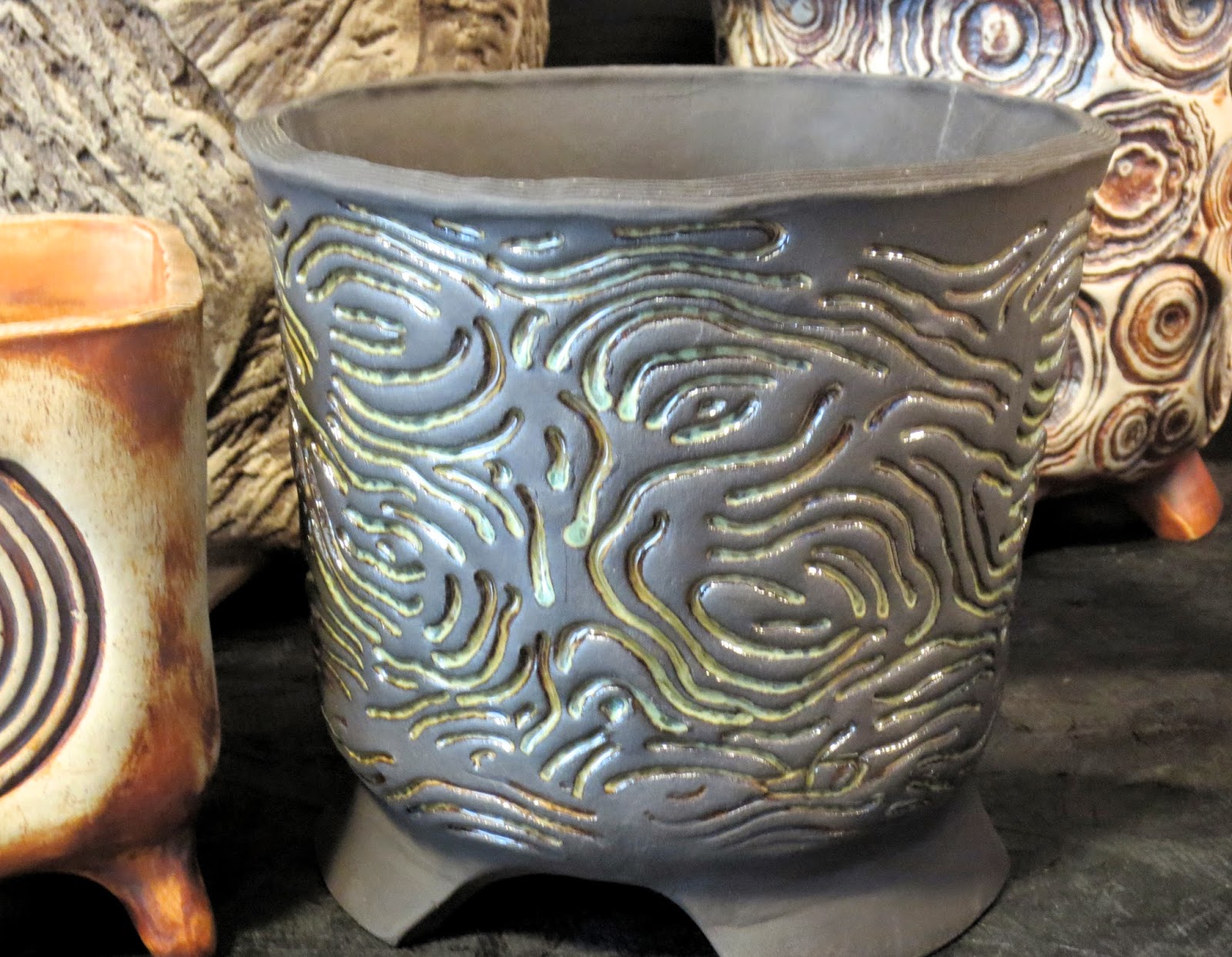 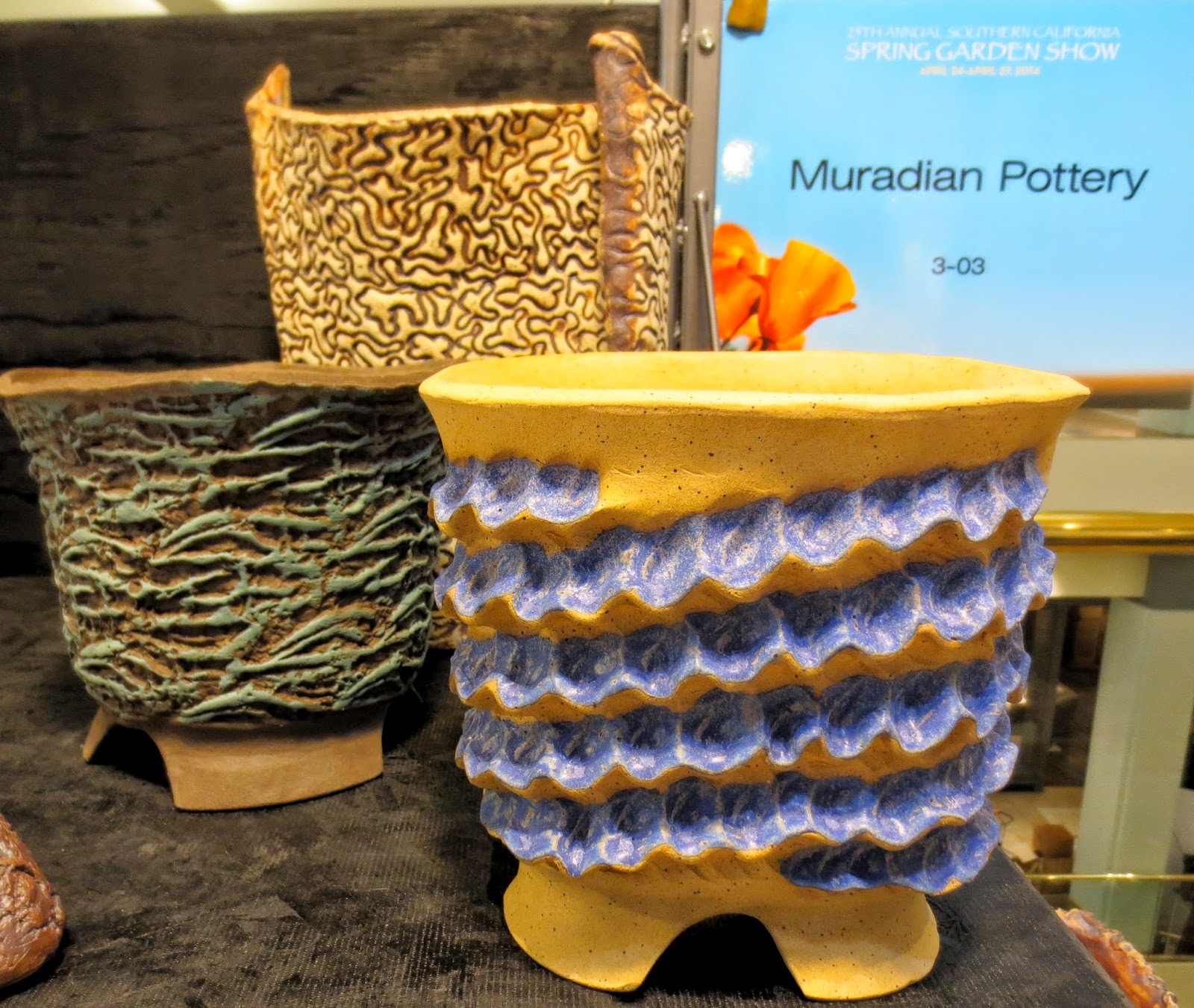 Needless to say, I didn't go away empty handed.  Here's what I hauled home:


I'd like to say that this latest expedition extinguished my spring shopping fever - but that would be a lie.

In a Vase on Monday: Rose takes a backseat

The few hybrid tea roses I have have been only sporadic bloomers so far this year.  When I saw that one of the 'Medallion' roses had produced a fat bud a few days ago, I targeted it as the centerpiece for my next bouquet.  However, finding other flowers to complement the rose proved more difficult than I'd expected.  The snapdragon with similar colors in my vegetable garden was well past its prime and many of my peach-hued plants had too much pink.  I ended up picking a surprising partner, Tagetes lemmonii (aka Copper Canyon daisy).  Its bright gold flowers have deeper, orange-toned centers, which with the green, gold and orange foliage of Abelia x grandiflora 'Kaleidoscope,' made a nice mix to my eye.  The Tagetes also provide the scent the rose lacks.  The only problem was that the bright color of the daisies had the side-effect of putting the rose in the back-seat in the overall composition. 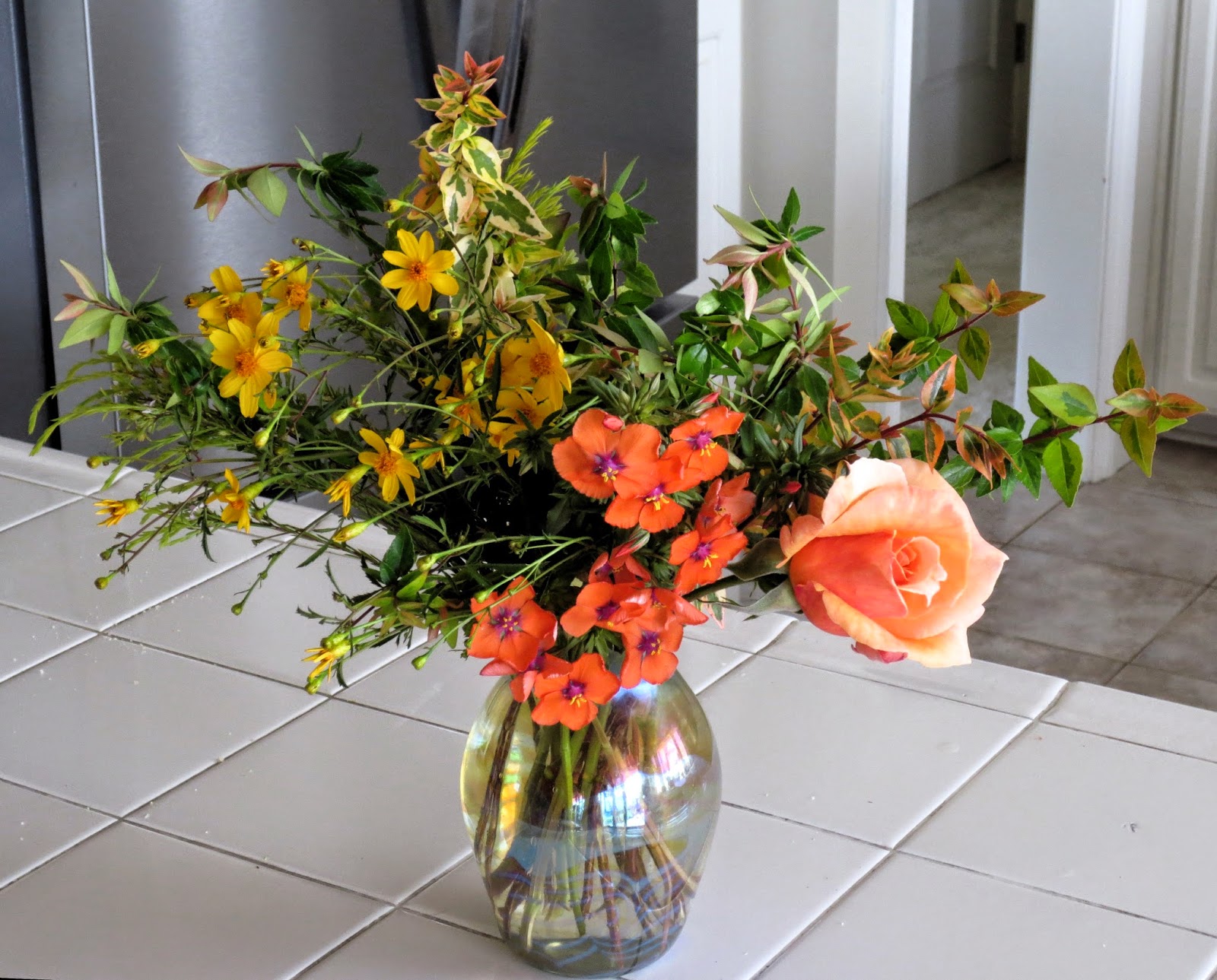 Of course, everyone has heard of back-seat drivers and I think 'Medallion' fits the stereotype. 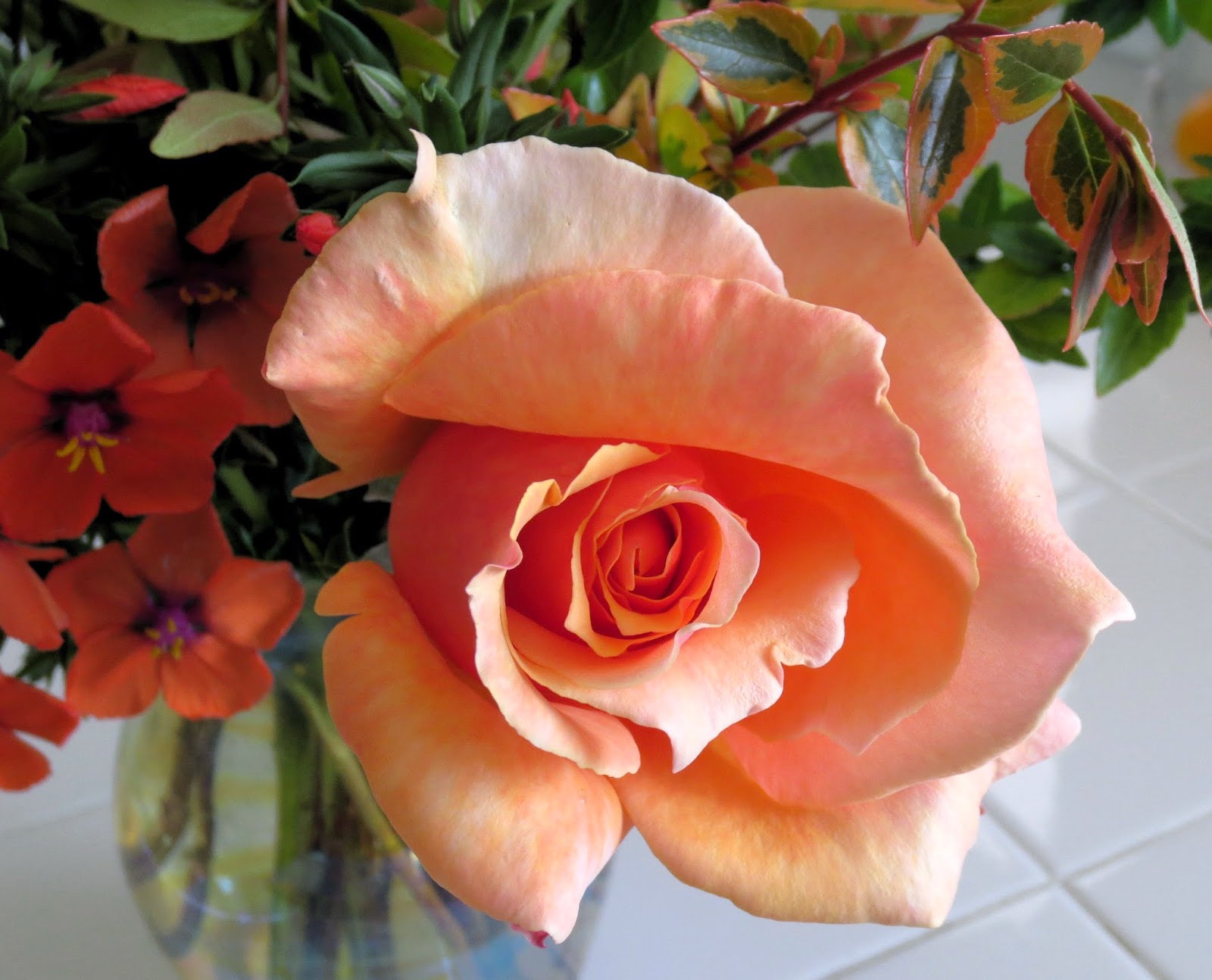 Anagallis 'Wildcat Mandarin' is an attention-getter too but the flowers also do a good job of mediating between the rose and the daisies.  The petals pick up the color of the rose, while the anthers in their center pick up the yellow-gold of the daisies.

The other components of the bouquet include a few stems of Coleonema pulchellum 'Sunset Gold' (Breath of Heaven), Tanacetum parthenium (feverfew), and Justicia brandegeeana (shrimp plant).  I'd planned a larger role for the Justicia but the stems of my still-small plants didn't rise to the occasion.  I used them to dress the back of the bouquet. 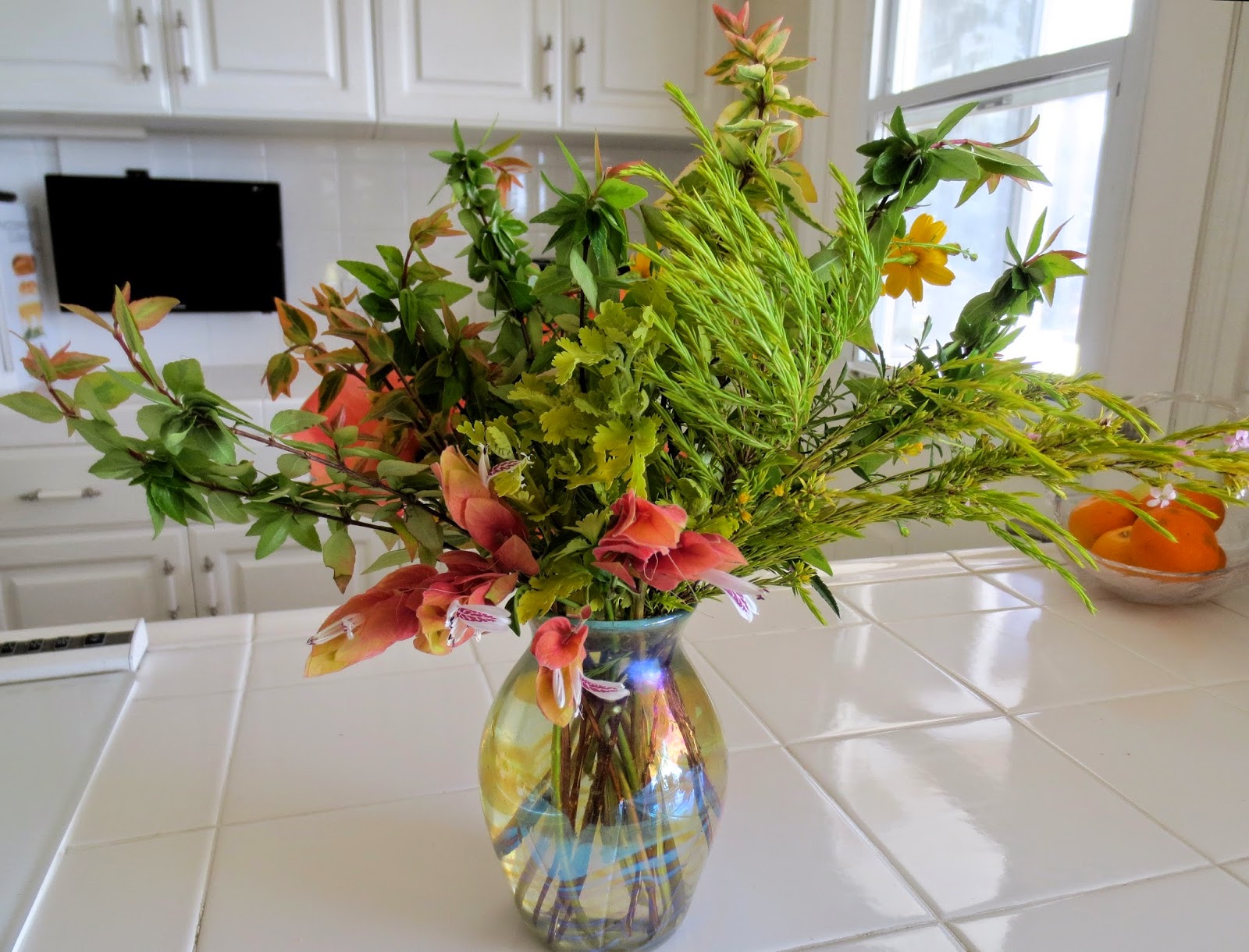 This bouquet is my contribution to Cathy's meme at Rambling in the Garden.  Please visit Cathy to see her creation this week and to find links to the posts of other contributors.

I attended the South Coast Spring Garden Show in Orange County this weekend.  To say that I was underwhelmed by the display gardens is an understatement.  I was disappointed by last year's exhibits but more so by this year's offerings.  Rather than show the majority of these as I did last year, I'll show you just a few.

Once again this year, the best exhibit was presented by Orange Coast College's Horticulture Club.  However, as Hoover Boo of Piece of Eden posted earlier, it bore similarities to last year's construction, which was also comprised of a wood deck, wood benches and raised planters.  Still, I felt it did what most of the other exhibits didn't: created a snapshot of ideas representative of a real garden. 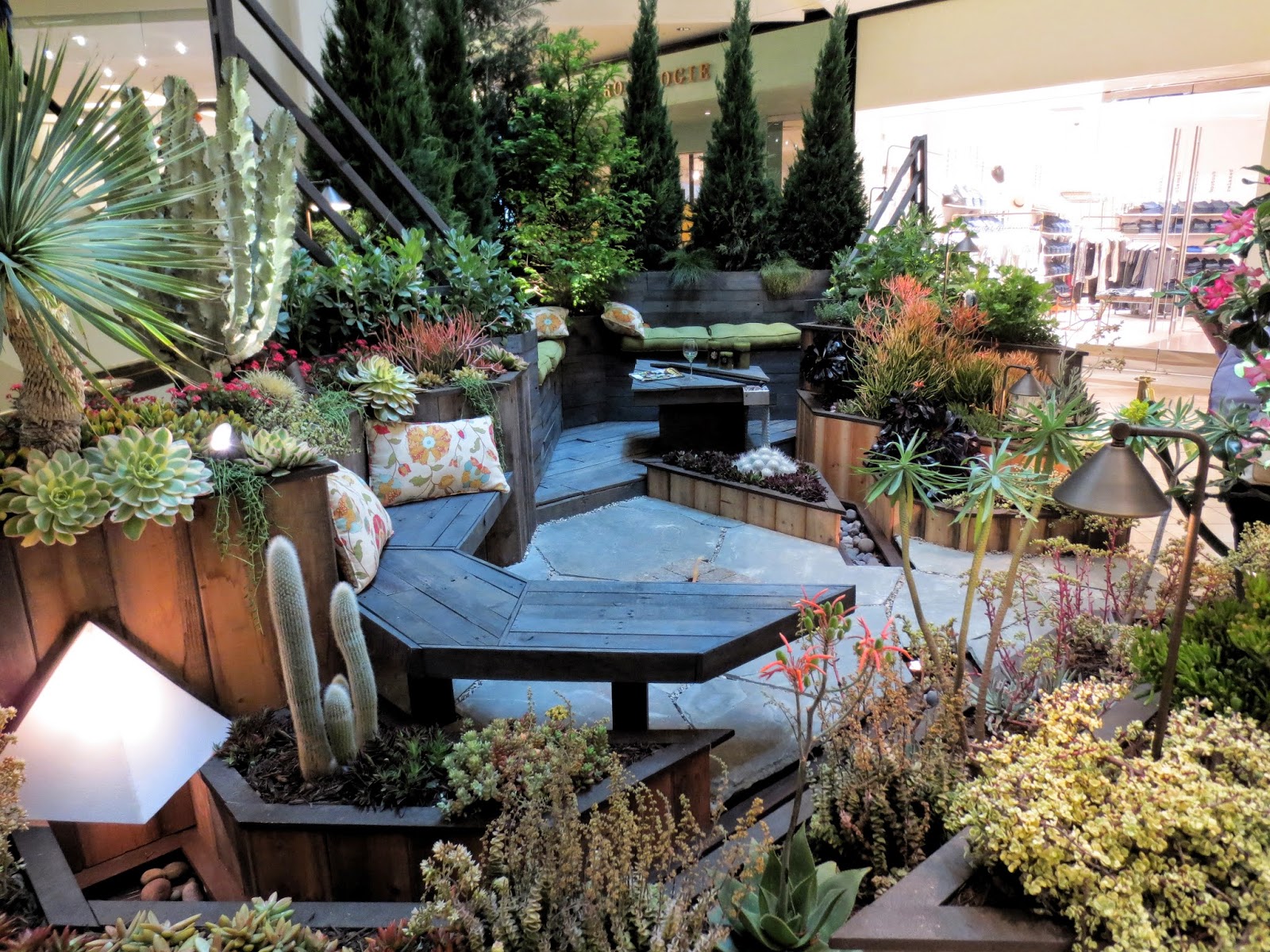 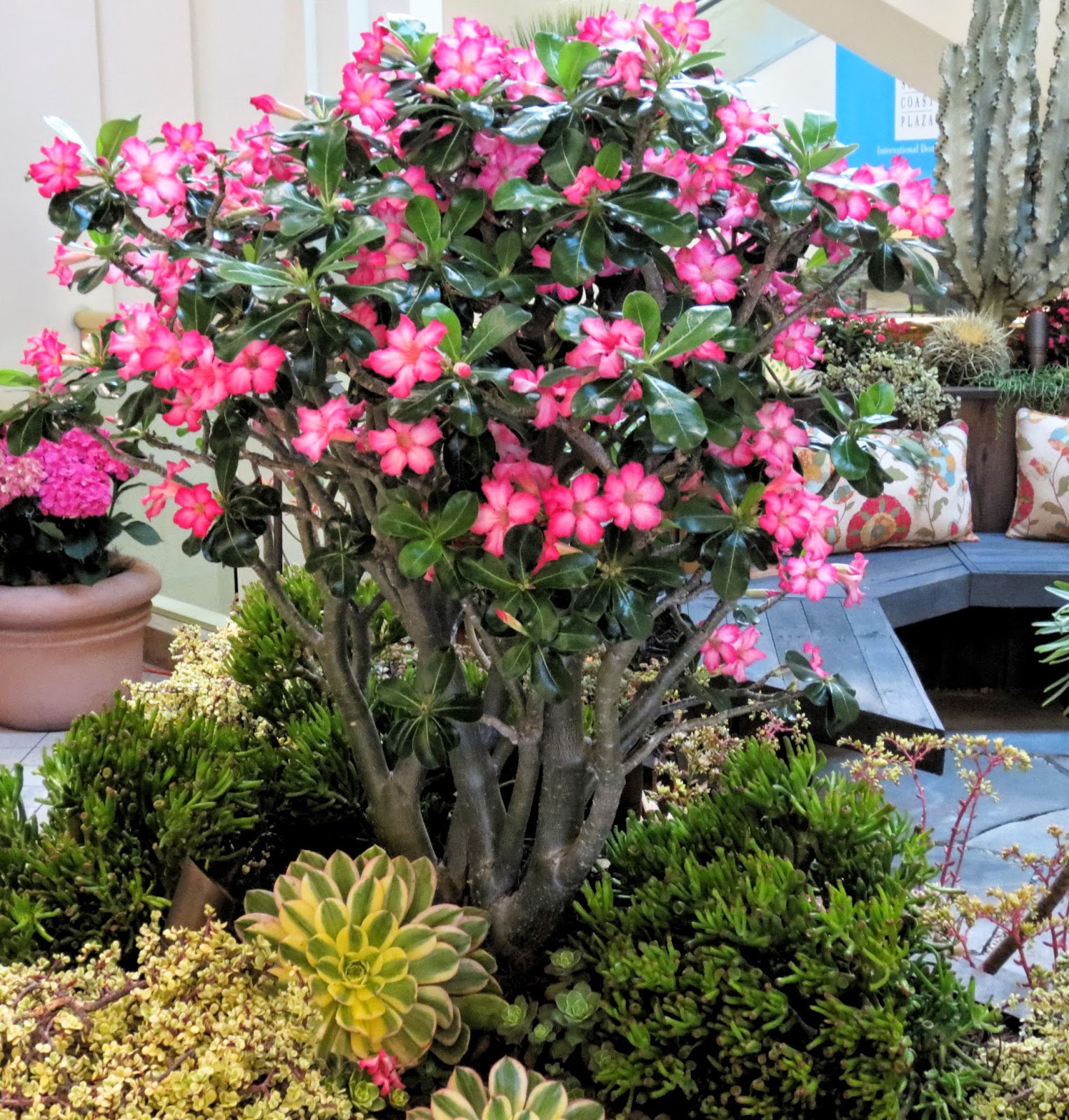 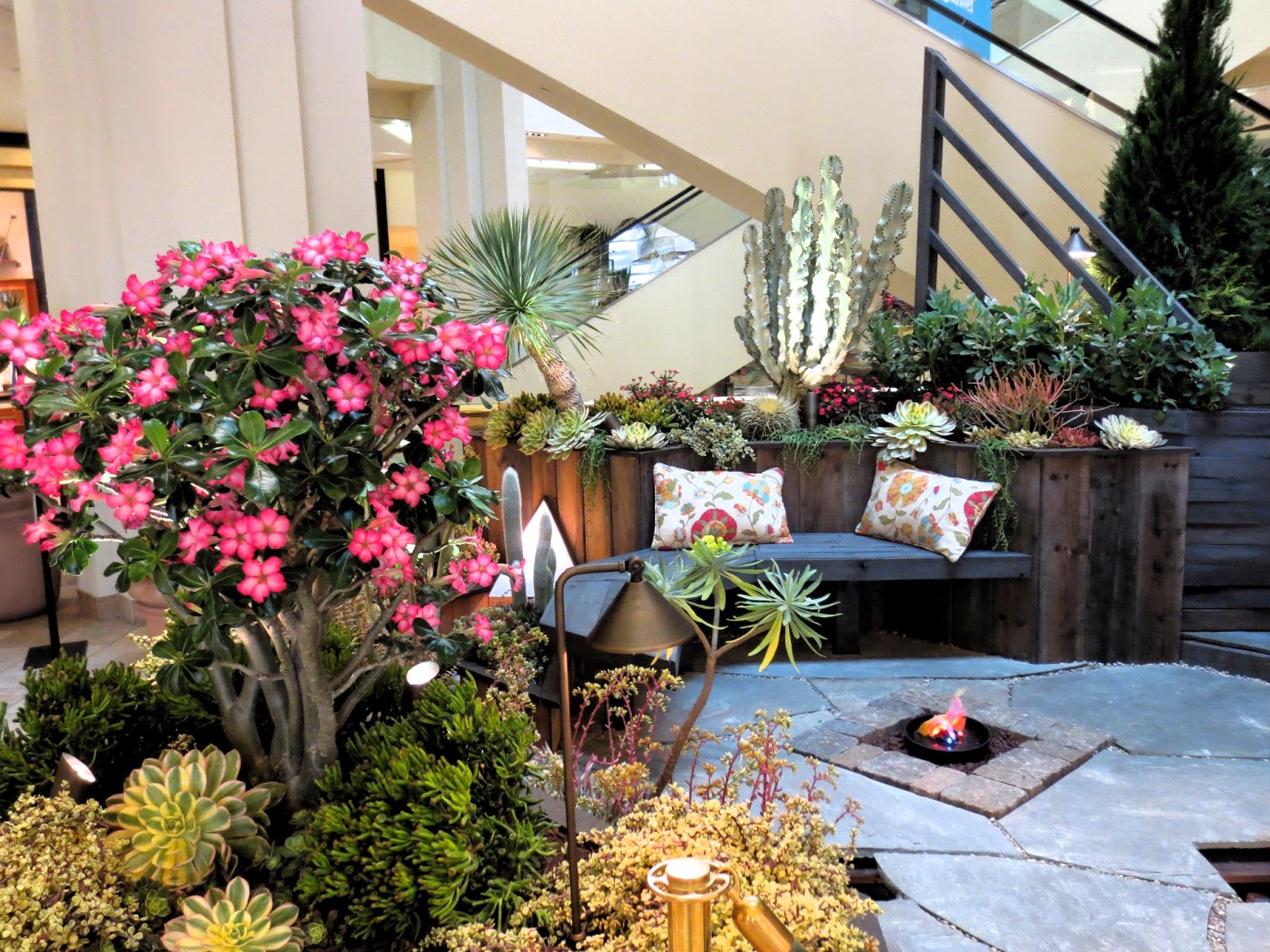 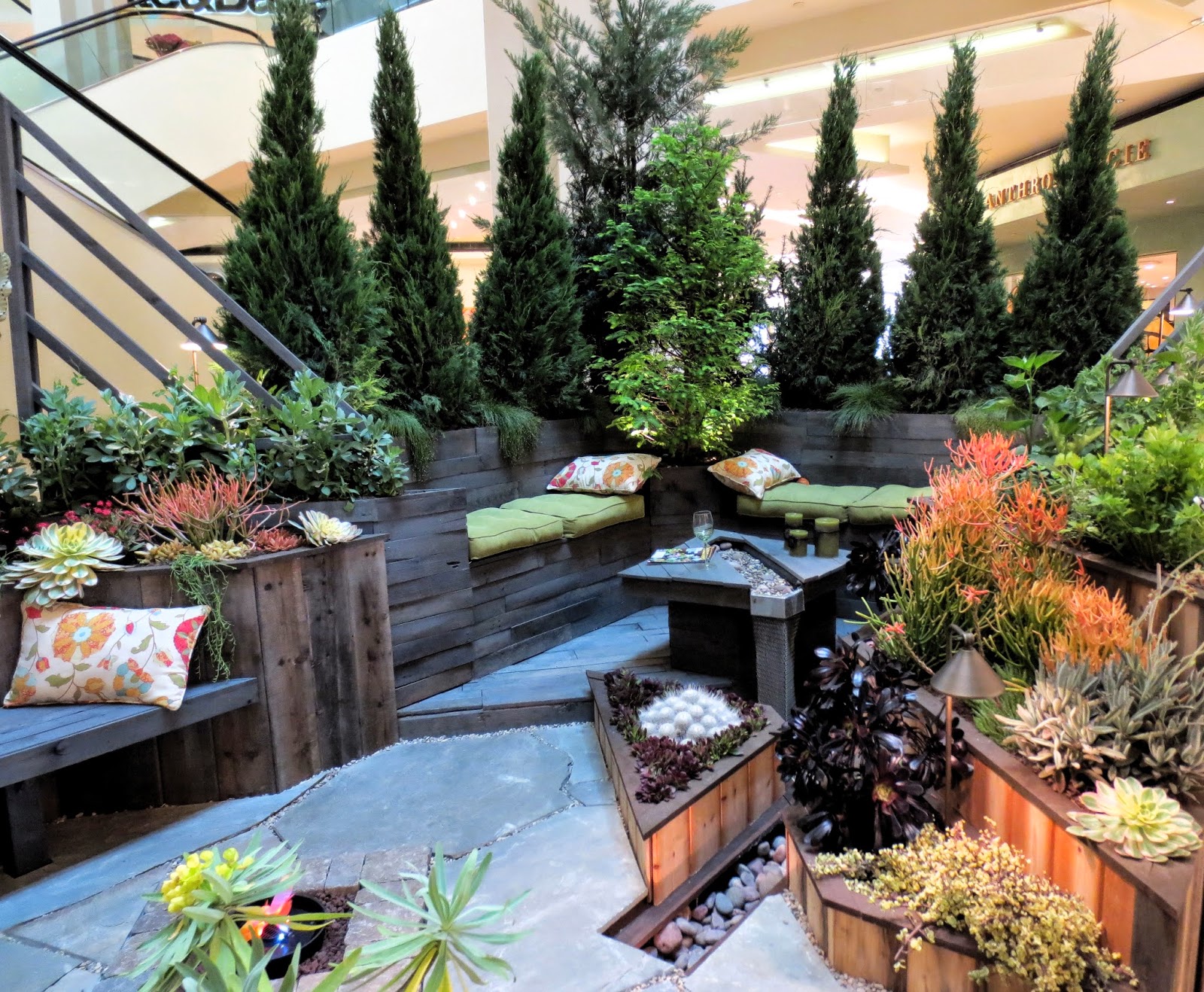 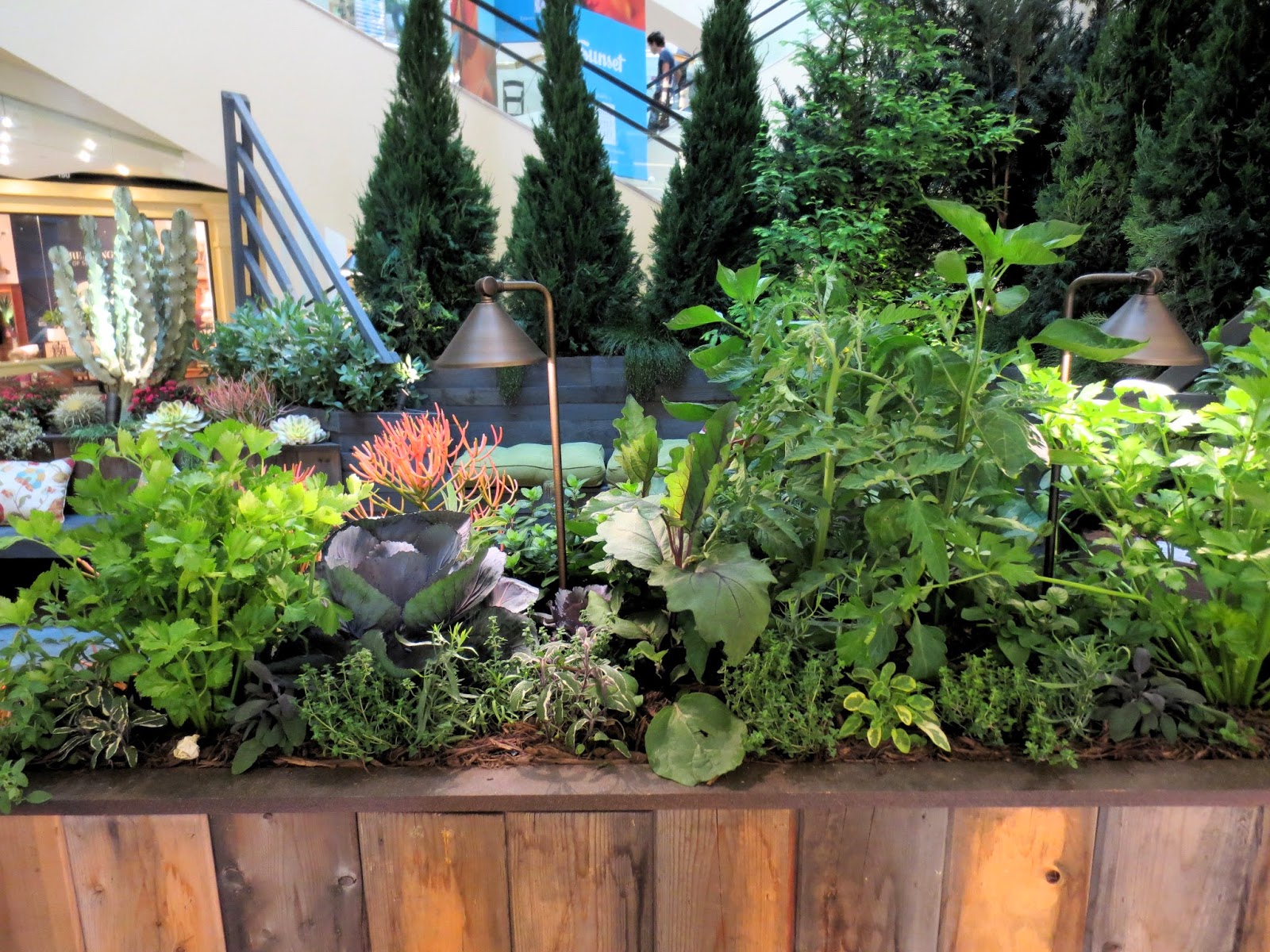 This one, put together by Saddleback College's Landscape Design Alumni Association, had elements I liked, although I think the central sculpture overwhelmed the space. 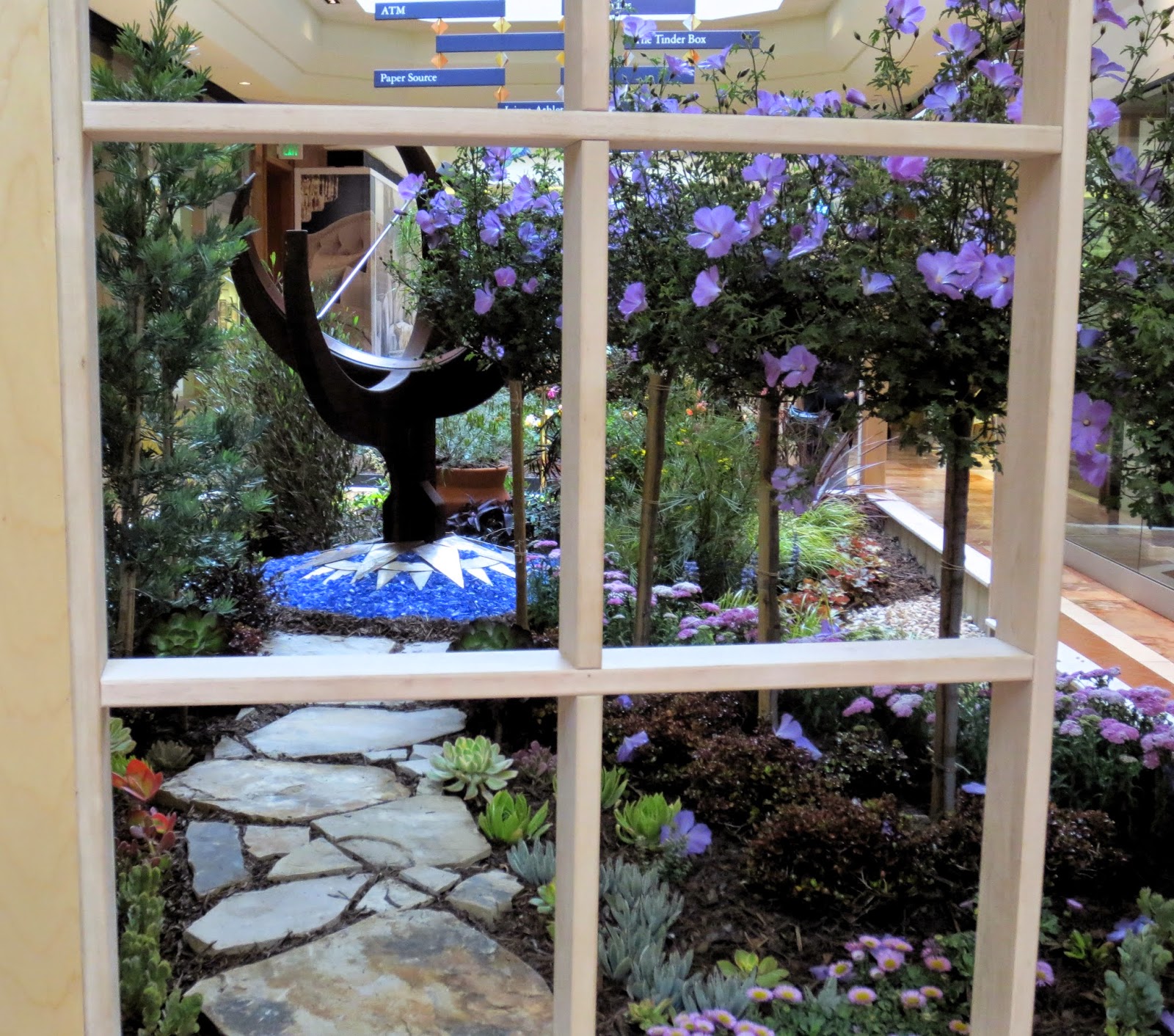 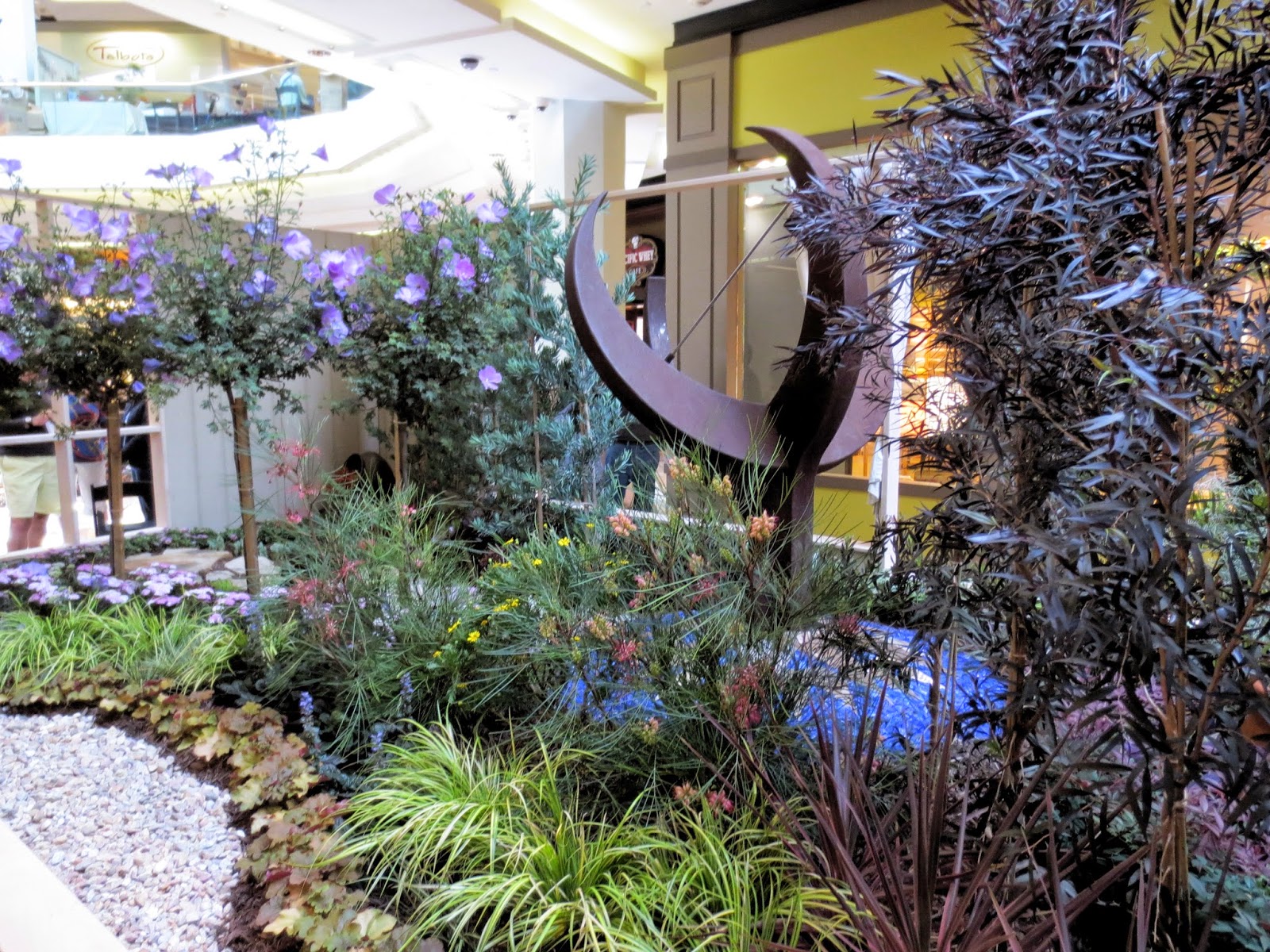 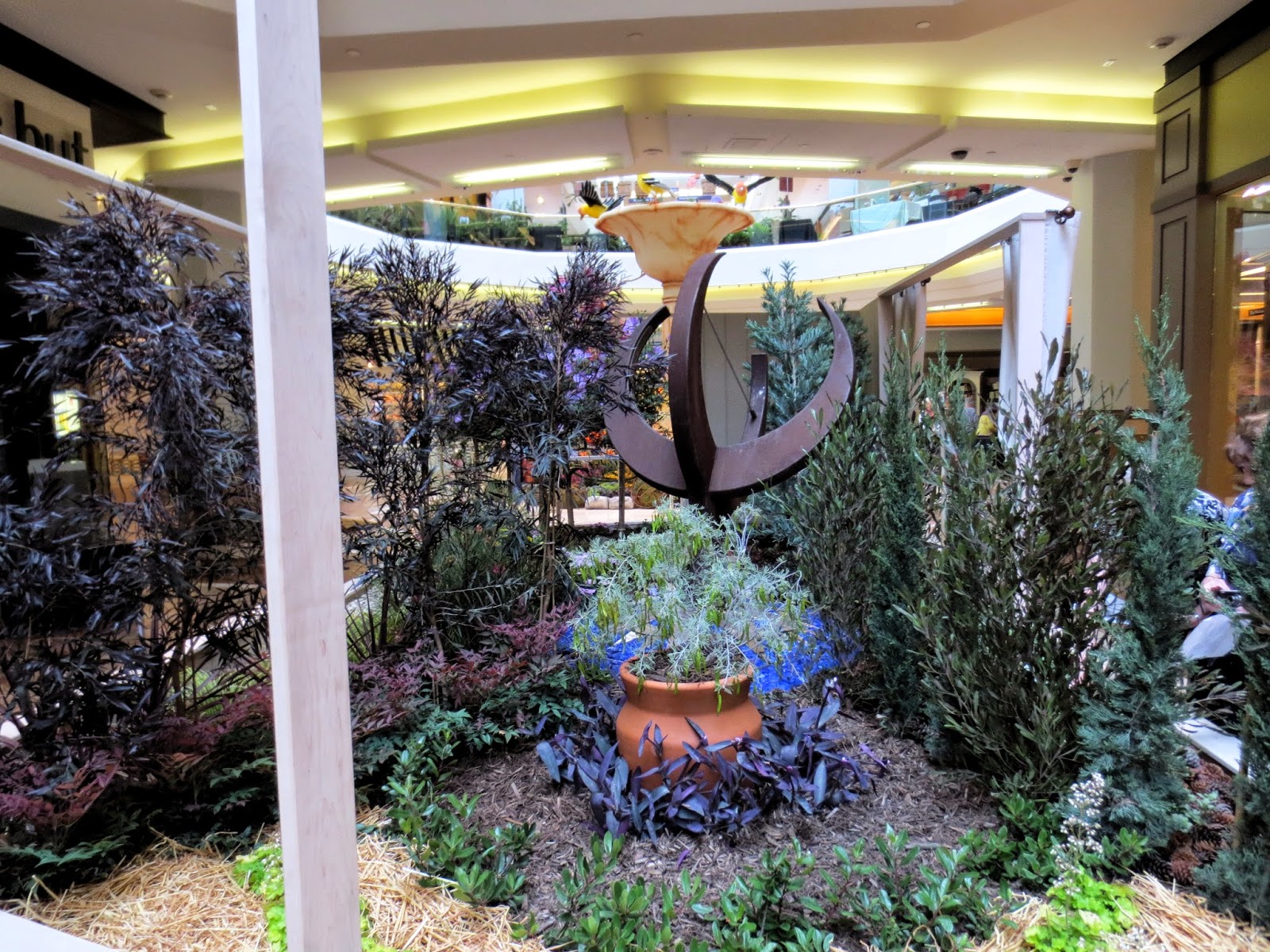 I acknowledge the difficulty of creating the impression of a garden in a relatively small space, especially a space in the middle of the visually busy atmosphere of a shopping mall, but some exhibitors didn't put much creative thought into the effort.  The following exhibit, an ode to a garden honoring former First Lady Pat Nixon at the Nixon Library in Yorba Linda, was a mish-mash of poorly associated plants. 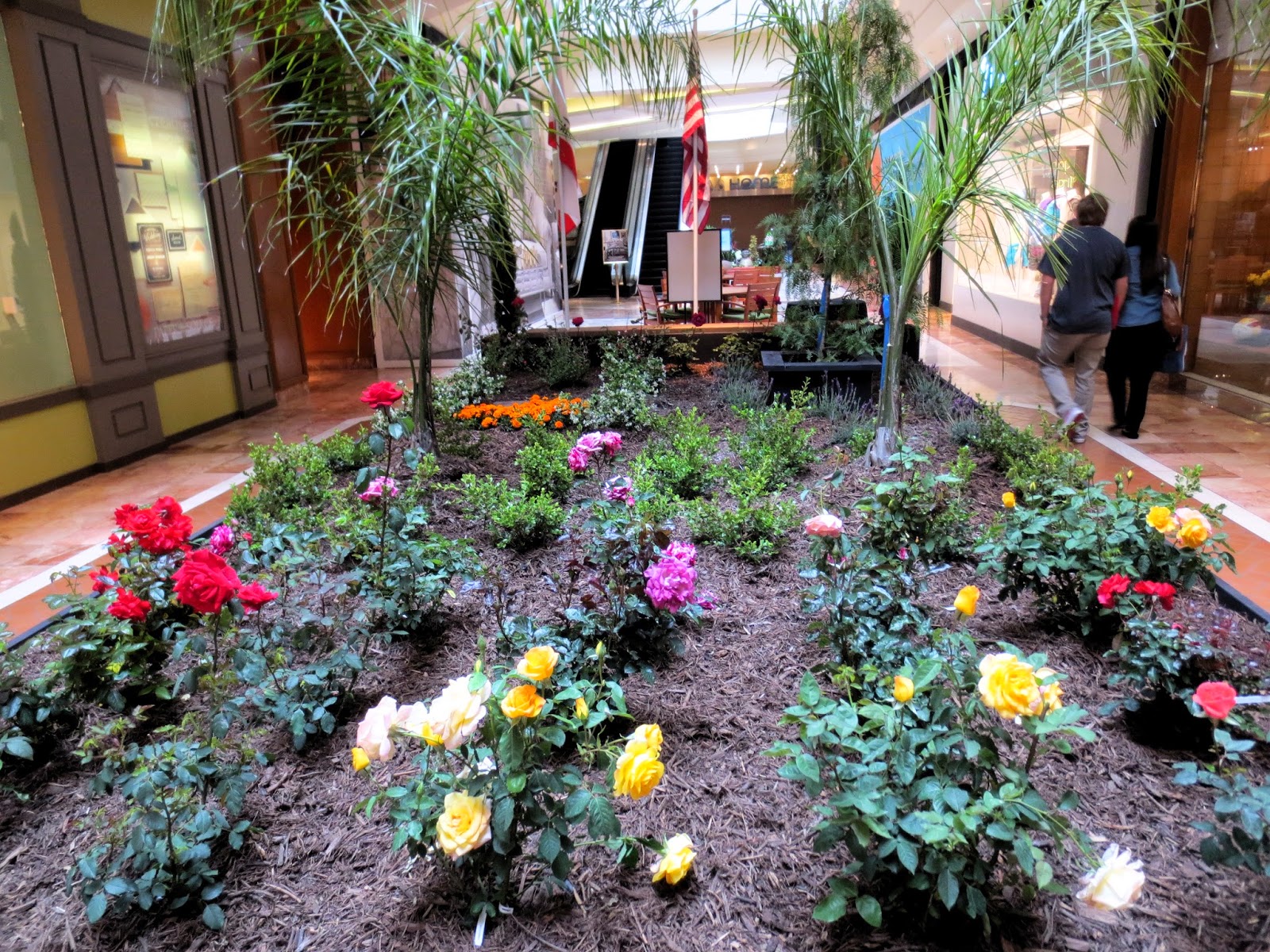 At least the memorial park that created a display, complete with sample gravestones, to sell visitors on its services was absent this year.

On the other hand, the floral centerpiece in the middle of the shopping mall area used for the exhibits, designed as in prior years by Fiesta Parade Floats, was nicely done. 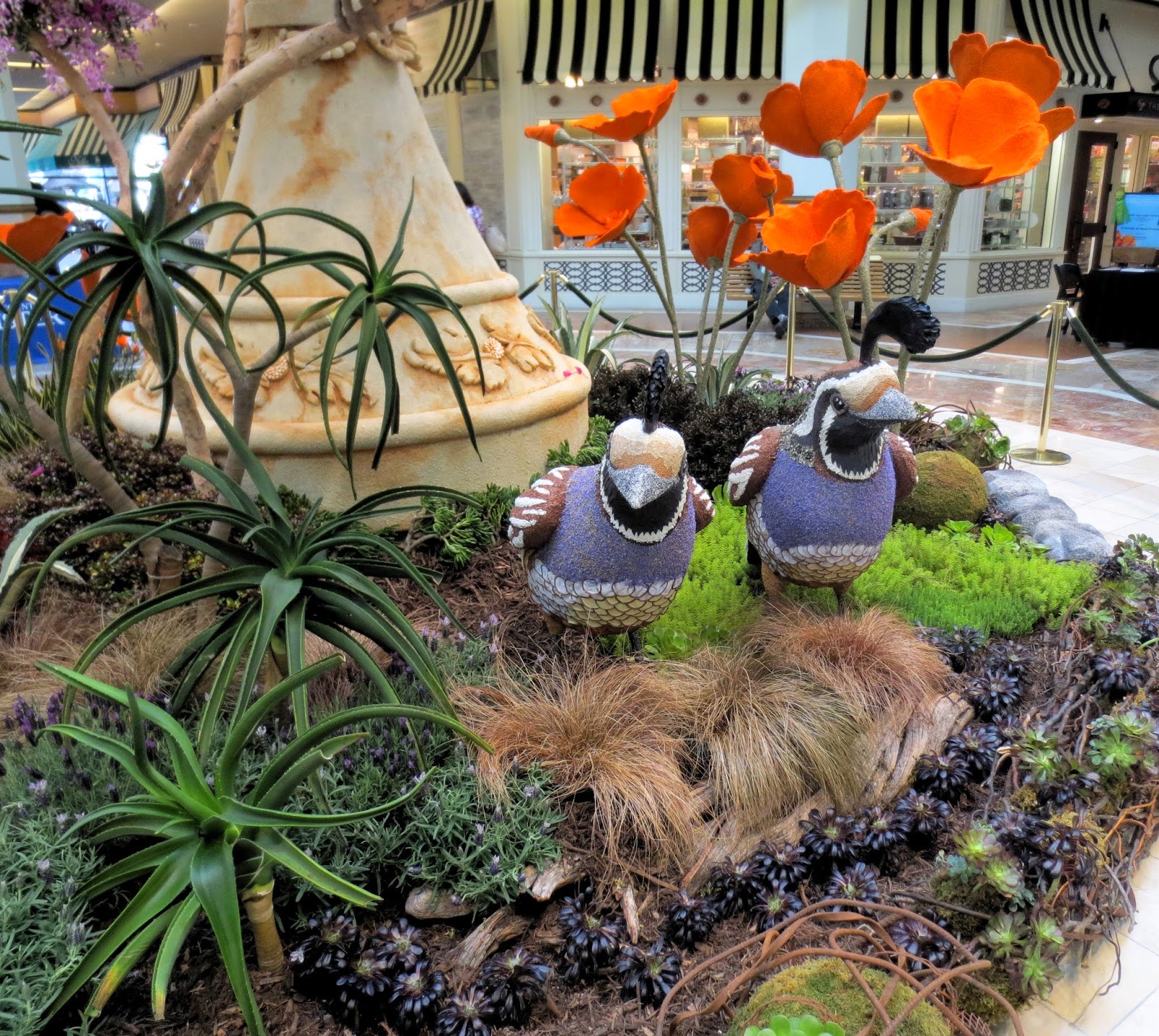 The Iris Society also had some nice specimens on display.


My main goal in driving one hour to the south to attend the event was to see what the vendors attending the show had to offer.  I'll post some photos of my expedition through the top 2 floors of the show later this week.