Yesterday, I paid my first visit to South Coast Botanic Garden after an absence of four months.  They've been advertising a "superbloom" event but it's not a superbloom in the conventional sense of the term, which describes a broad-scale wildflower display in desert areas following an unusually wet rainy season.  Our rainy season has been anything but wet this year and this particular bloom fest focused not on wildflowers but on flowering bulbs planted en masse last fall to provide visitors a welcome jolt of color as spring approaches. 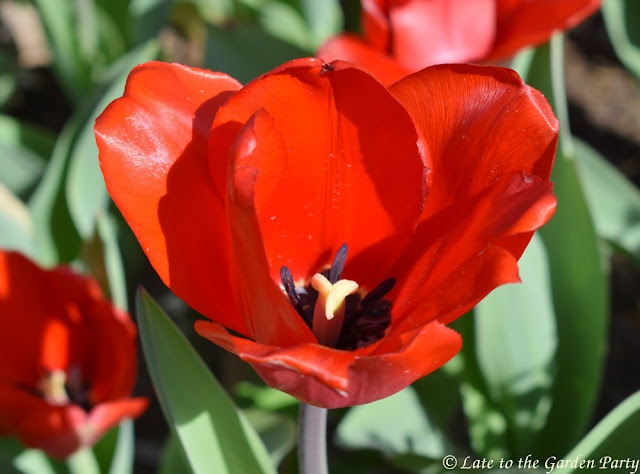 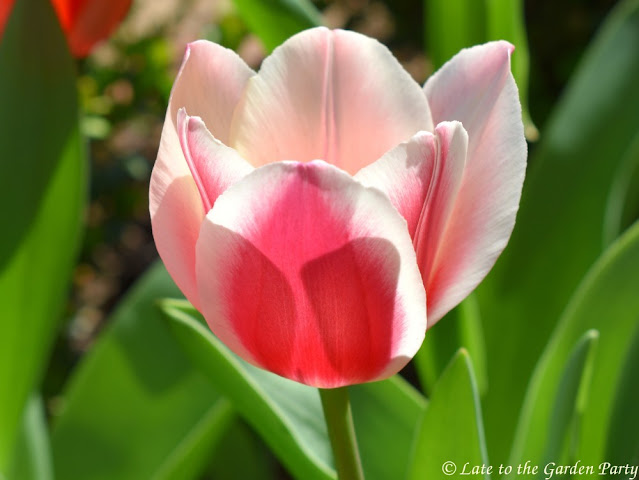 While I couldn't miss the tulips upon entering the garden, I wandered a bit before I found the daffodils (Narcissi).

Other flowers could be found in spots throughout the garden.  I photographed only a few.

The garden is in the process of constructing a new event space that will feature a butterfly pavilion, scheduled to open in April, so a large area was cordoned off.

I had time to visit only the front half of the garden on this occasion.  Weather and circumstances permitting, I hope to wander further afield on my next visit.

Best wishes for a colorful weekend.

Sometimes it's best to just jump in

There are a lot of projects in the garden that I never seem to get to, even these days when there's arguably more time available to focus on such tasks.  Recently, I launched two such projects without any forethought about what I was getting myself into, and my husband initiated another one.  Once again, I didn't take "before" photos, although I scoured my digital files to come up with what I could.

The first project involved clearing an area that was infested with asparagus ferns and their nasty bulbous roots.  I inherited this problem with the garden and had previously only chipped away at the ever-expanding ferns.  Some prior owner apparently decided that asparagus ferns were a good way to cover a lot of ground fast - and added dozens of the plants throughout this garden.  Admittedly, they're evergreen, produce berries for the birds, and can tolerate dry conditions that even succulents can't handle.  However, the berries are toxic to cats and dogs, and birds spread the plants everywhere.  They also produce masses of bulbous roots, which mingle with the roots of more desirous plants, making them difficult to remove.  I previously removed large masses of them in front of our mimosa tree to make room for other plants, a process that took days.  (It felt like weeks.)  I personally feel that real estate sales should be required to list asparagus ferns as hazardous substances.

While I was working on that project, my husband started one of his own, into which I got sucked.  You may recall that, after years watching it decline, we removed our mimosa tree (Albizia julibrissin) late last year.  After negotiation, my husband agreed to replacing the mimosa with a Ginkgo tree but, with the mimosa's massive trunk still in place, we needed to clear a spot for it.

My husband decided to cut back the remaining trunk further so we could relocate a nearby mass of Agapanthus to clear a space for the new tree.

His next step was to remove the boards originally placed on diagonals around the mimosa tree, replacing them with new boards to level that area for planting. 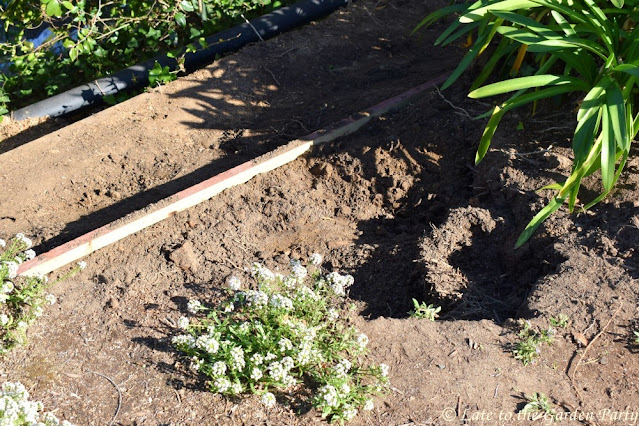 Then he proceeded to remove the large clumps of Agapanthus you can see on the left in the previous photo.  That's when I got involved.

When I'd removed what I could, my husband added three more cubic feet of top soil and yesterday I dug in planting mix and compost, removing more asparagus fern roots as I went.  Our native soil is very sandy so I'm hoping that the additives, well mixed, will provide a good foundation for the new tree.

Until the Ginkgo biloba 'Autumn Gold' (ordered yesterday!) arrives, further action is on hold on this project.  Yet, still in garden clean-up mode, on the fly I decided to tear out an overgrown mass of peppermint geranium (Pelargonium tomentosum) I'd managed to ignore for a long time.

Now, the main issue is finding plants to fill the vacant spots.  I made my first trip in over two months to my local garden center yesterday, mainly to pick up planting mix but I took a spin to see what plants are available.  There were a lot of the usual early spring options but I didn't get excited about much other than a Banksia spinulosa.  In another month I should be immunized and expect I'll feel better about wandering further afield in search of plants.

In a Vase on Monday: Sunny with blue skies

Although I've complained aplenty about the lack of rain this year, I know we're far luckier in the weather department than people in a good percentage of the United States at present.  We haven't been buried under snow or ice; we haven't lost power or had frozen pipes; we're not struggling to keep warm or heating snow to have water.  We're starting off the week with sunny skies and unseasonably warm temperatures.  We could reach a high temperature of 80F (26C) today.  Hopefully, some of that warmth will blow eastward.

It definitely feels like spring even if that transition is still officially a month away so I chose flowers that reflect that vibe.

The arrival of the blue-flowered Freesias last week and the abundance of blue Anemones in my cutting garden prompted the second arrangement.

For more arrangements created from material gardeners have on hand, visit the creator of In a Vase on Monday, Cathy at Rambling in the Garden.

The Wonderful World of Aeoniums

A few years ago, another garden blogger asked readers what they'd call their garden if they were to assign it a name.  As I recall, I blithely responded "Lizardville" or possibly "Aeoniumville" but actually, while lizards are present year-round, they're most invisible during the cooler months, while succulent Aeoniums are always readily evident.  When collecting photos for my recent February foliage post, I found myself snapping a lot of photos of Aeoniums.  I decided they deserved their own post so here it is.

I've often described Aeonium 'Kiwi' as my "gateway succulent" and indeed it was the only succulent I grew in my former tiny garden but I'm going to start off this post with Aeonium arboreum, a larger and more varied group introduced to my current garden soon after we moved here in December 2010.  A good friend brought me a few, as cuttings if I recall correctly.  I wasn't immediately sure what to do with them so those first specimens went into what I now call my Aeonium nursery.  From a few rosettes planted beneath three citrus trees, they grew into large clumps.

As my husband and I pulled out lawn and later dying shrubs, creating new beds, Aeonium arboreum cuttings gradually migrated into one spot after another.  In fact, they became my go-to plant to fill blank spots for which I didn't have more specific plans.


I've also mixed Aeonium arboreum with other Aeonium species, as well as other succulents.

A few years ago, I picked up a handful of Aeonium haworthii 'Kiwi Verde' in 4-inch pots and discovered that it's even more vigorous than its 'Kiwi' cousin.

As much as I love the color green, splashes of other colors are always welcome.  If you like red, there are lots of red-toned Aeoniums, many of which are hybrids of Aeonium arboreum.


The conditions in which Aeoniums are grown often have a significant impact on their color.  This seems particularly true in the case of those with large rosettes - or at least that's been my experience.

There are a few other Aeoniums in my garden that are harder to find.

That's my collection.  I may have missed one or two varieties but this is as complete a run-down as I can provide.  If you've found an Aeonium you love, let me know!