In a Vase on Monday: Blue and yellow

Blue and yellow flowers were the natural choice for an arrangement this week.  It's a small way to signify support for the Ukrainian people in light of the aggressive, unprovoked actions taken by a malicious foreign dictator intent on reconstructing his country's former empire rather than focusing on addressing the economic performance issues within his country's current boundaries, which despite its vast natural resources has a significantly lower GDP than my home state of California.  I have vivid recollections of my mother's heated views of that country's treatment of Finland, her parents' homeland.  The history of the Winter War, fought by the Finns when the Soviet Union invaded their country in 1939, suggests parallels to the current conflict in Ukraine.  Russia's leaders appear to be following a similar playbook and I can only hope this latest invasion of Ukraine ends as quickly as the Winter War did - with an equivalent hit to the invading country's international reputation.  My mother always said the Finns fought against incredible odds because they had sisu.  From what I've seen and heard of the current conflict, Ukrainians have sisu too.

As it's spring here, regardless of what the calendar says, I have a second arrangement too. 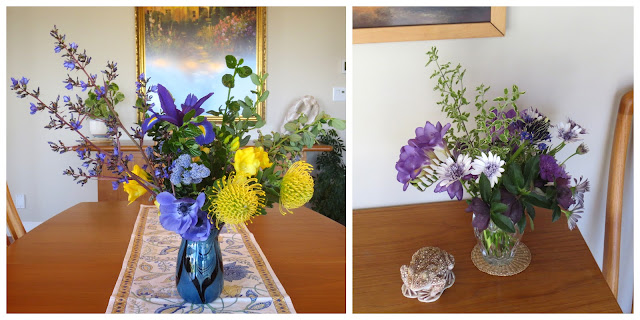 The area on the west side of the garage, sandwiched between the hedge that fronts the street and and the driveway, was the last area we addressed in our campaign to remove all our lawn after moving in.  In addition to the fact that we were running out of steam at that point, the area has been a challenge from the start.  Finding the right mix of plants has been difficult, complicated by a good deal of shade and soil riddled with roots from the hedge and four surrounding trees.

By way of history, we didn't begin addressing this area until September 2015.

Instead of changing out three or fewer plants at a time as I've been doing, I decided the area needed a more extensive makeover, although I wasn't prepared to pull everything out and start all over so I'm calling this latest effort a refresh rather than a wholesale renovation.

I'd already removed the coleus (Plectranthus scutellarioides) shown in October's wide shot when I took the last photo shown above but I dug out three Duranta erecta and the floppy Polygala fruticosa late last week.  After adding soil amendments, I filled in with recent purchases and some seedlings.  The replanted area still looks bare but hopefully the new plants will bulk up within the next couple of years.

A passalong gift of the Dombeya burgessaiae late last year started my reexamination of the area.  I decided to lean into a pink, purple and white color theme with my subsequent plant choices.

The seedlings I added are still tiny but, as there's little rain in the future forecast, I decided they'd have a better chance of survival in the ground where they'll receive irrigation on a regular schedule than in pots, dependent upon me for keeping them watered as temperatures start to climb.  I didn't take photos of the seedlings but they included Echium handiense (3), Paeonia cambessedesii (4, aka Majorcan peony), and Plectranthus zuluensis (2).  I potted up several peony seeds a year and half ago and was surprised when some germinated but, still small, they died back in the summer just as the parent plant does.  They recently reemerged, still small, so into the ground they went.  They may not make it but I remain hopeful.

I left a lot of plants in place, only a small number of which I photographed for this post.

Existing plants not shown in close up photos include the following:

The above list is as much for my own reference as it is for general interest.  While I've had some success with hellebores and daylilies elsewhere in my garden, these plants are questionable selections for this area, especially as rain levels remain low.  If they don't do well over the next few years, they'll be out in a future "refresh."

This project was the focus of my efforts in my garden this week, undertaken in part to distract my attention from newscasts reflecting the upheaval in Europe instigated by an authoritarian bully seeking to dominate his neighbor.  As that bully escalates his meritless claims, my heart is with the Ukrainian people and their desire for peace without relinquishment of their rights.

I was captivated by the tree shown below during a visit to my local botanic garden earlier this month.  As I struggled to understand why it fascinated me, it occurred to me that what it symbolized may say something about the current state of my psyche, rather like a Rorschach test specifically targeting gardeners.  Rather than project my personal interpretation on others, I thought I'd throw it out there for readers to offer their own interpretations. 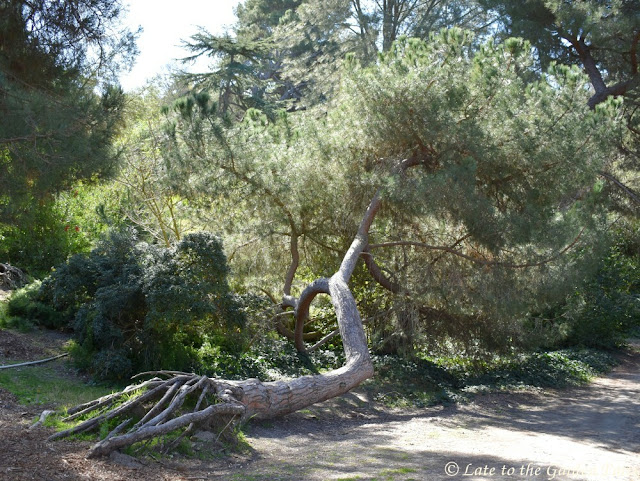 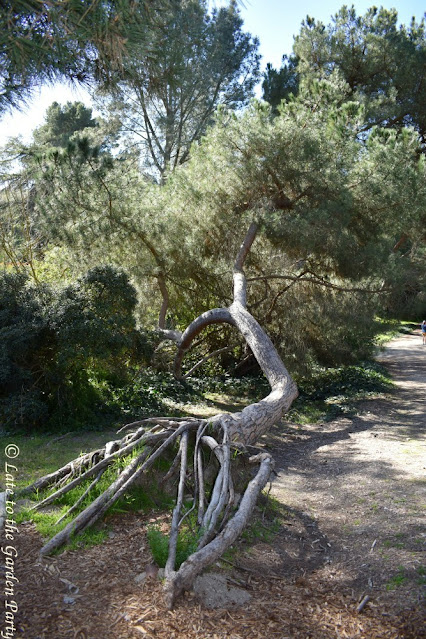 In a Vase on Monday: It's not an illusion

My calendar reads the same as yours but it IS spring here in every way that counts.  While it's not nearly as warm as it was two weeks ago, new flowers are awakening daily.  The pace of bloom isn't retreating even as daytime temperatures slip back into the 50sF (14C).  I can also swear that I saw my first monarch butterfly on Saturday.  (It could have been a painted lady as I didn't get a close look before it flitted away but massive numbers of monarchs were sighted on California's central coast in January so it seems within the realm of possibility.)  Sadly, rain seems to be a pipe dream, although there's another small chance of precipitation between late Tuesday and early Wednesday.  Last Tuesday evening, we got 0.08/inch (2 mm) of rain, which at least refilled my empty 50-gallon rain tank.  If any rain manages to reach us this week, it's expected to be on the same order of magnitude.

Another sign of spring is the sudden arrival of masses of aphids on tender green foliage.  On Sunday morning, I spent more time trying to eradicate those miserable sap-suckers than I spent cutting flowers but I still have two arrangements to share.

My second arrangement couldn't be more different in terms of color.

The Queen of Hearts says...

Off with their heads!  Alice in Wonderland's Queen of Hearts wasn't known for her patience.  As spring moves ahead at record speed here and my focus shifts to planting, deadheading flowers, and, in the absence of rain, watering, I decided not to wait any longer to cut back the dozens of florescent yellow blooms of Aeonium arboreum I discussed in an earlier post.  However, rather than throw away all those bloom stalks, I collected the best of them and set them in the driveway as an offer to the neighbors.  I put them out just after 4pm to catch both the late afternoon and early morning walkers.  Because our Santa Ana winds were already kicking up (again), I placed a cement brick at the bottom of the plastic pot to ensure it would stay upright.

I was surprised when I went out to the mailbox after dinner (around 7pm) and found one entire tray of Aeonium cuttings and all the flowers, including the plastic pot (and the brick), gone.  If I'd known they'd have that kind of appeal, I might have put out a second bucket of flowers but, as it was, I left only about a dozen bloom stalks in the garden, most of which aren't yet fully developed.  I threw away between two and three times the number of flowers stalks I left on the corner of the driveway.

The garden was left looking a little quieter but, as it's quickly moving into peak spring mode, eliminating most of that florescent yellow color allows me to focus on the new blooms.  Here are a few before and after shots.

I need to pull out some masses of Aeonium to make additional room for plants currently crowded by them but that's a project for another day.  My task for the weekend is to get some new plants in the ground.

Best wishes for a pleasant weekend!  If spring hasn't reached you yet (and I fully realize that's true in most parts of the Northern Hemisphere), I hope you see early signs of it soon.

Spring arrives early in coastal Southern California.  Despite the complete lack of rain in November and again in January, the heavier-than-usual rain in December raised my expectations for a bountiful spring.  And, generally speaking, that's what we have this February, despite an utter lack of rain this month too.  However, after an extended blast of exceptionally warm, dry weather, some cool-season bloomers have beat a rapid retreat, while others are hustling to take center stage ahead of schedule.

I'll focus on the plants making the biggest splash first.  As it's impossible for me to choose favorites this month, I'm going to show them alphabetically by genus.

Although bulb blooms will appear at intervals into April or May, there are enough flowers in that category this month to address them as a separate group.

At this time of year, new flowers appear almost daily.

Accompanied by steady dry winds, last week's version of a winter heatwave triggered an early exit by some flowers that were looking great just ten days ago.  The Anemone coronaria flowers offer one example, although I'm still hoping for a recovery in that group as temperatures continue to drop this week.  The lack of rain since December has also had a significant impact in that many of my direct-sown seeds simply failed to germinate when I didn't make up the difference using irrigation.

I'll close this Bloom Day survey as I usually do with collages showing the best of the rest that's flowering this month, organized by color.

For bloom surveys from other parts of the country and spots around the world, check in with Carol of May Dreams Garden, the creator and champion of the phenomenon that is Garden Bloggers' Bloom Day.