The title of this post has nothing to do with my mental state, even through the month of June has been a turbulent to say the least.  The focus of my post is entirely on the blue-flowered plants in my garden.  I'll try growing just about any plant with blue flowers that has the slightest chance of surviving in my climate.  Of those that I've successfully established in my garden, it seems that the largest number of them flower in summer.  Here's the current line-up:


But wait, there's more!  These are blooming as well, albeit as bit players in the garden:


May your weekend proceed under a bright blue sky!

I've been spending a lot of time in my garden, partly to escape the pandemonium associated with our remodel, but also in an effort to manage the garden's explosive growth following the best stretch of rain and moderate temperatures we've had in a long time.  I could probably spend several hours a day for a solid month just cutting back Erigeron karvinskianus and even then might have to start all over again with a fresh round of haircuts as soon as I finished.  I've also spent gobs of time deadheading flowering plants, pulling weeds, and cleaning out ripened bulb foliage.  In the midst of the last exercise, I took time to admire my sleek and always tidy succulents.


Some succulents have joined the floral parade.

Blooms are a mixed bag when the blooming plant is monocarpic, as most Agaves are.  But, if the Agave desmettiana produce a host of baby plants, that'll take the sting out of the loss of the 2 large specimens.  I only hope the bulbils develop fully before those 2 bloom stalks fall into the street.

In a Vase on Monday: From Spare and Simple to Frou-frou

I've been thinking about using stems of Leptospermum 'Copper Glow' in a vase since my shrubs began sporting their pretty summer blooms a few weeks ago but I'd no idea what to use with them.  When the ruffled Shasta daisies started to bloom, it struck me that they'd make a good accent for the Leptospermum's deep burgundy foliage but a vase with just two elements seemed too simple to me.  On my first pass through the garden, I cut a few stems of foxglove and considered adding a bronze-edged Calendula too before concluding that spare and simple was the way to go.


In viewing the above photos, you may have noticed that something's off with the kitchen space I use in photographing my vases.  After dealing with almost a year's worth of bureaucratic red tape, we finally kicked off our long-awaited remodel last Wednesday.  The current focus of work is outside as a team creates a new footing to support our five by nine foot kitchen extension but my husband is getting a head-start on taking apart our existing kitchen.

I've yet to determine where I'm going to go to prepare and photograph future vases so I used the kitchen this week while I still could.  We expect the contractor to cut off water to the space later this week so I'll be grappling with that problem head-on next week.  The contractor told me that I was also going to lose some of my Agapanthus this week when they pour a footing for the new HVAC system so I had to rescue those flower stalks for a second vase.


I hadn't planned a third vase but, rather than toss the foxglove stems I'd cut for first vase, I decided to use those in another vase featuring stems of Dahlia 'Enchantress'.  That plant produced nine new blooms this week and ignoring her output seemed a crime.

Today marks the the summer solstice in the Northern Hemisphere.  Summer can be unpleasant here so this isn't something we normally celebrate.  This summer may live up to its negative reputation with more of the horrific heatwaves that have become increasingly common in recent years but, given that the day started out with a touch of rain, unseasonably pleasant temperatures, and a smog-free horizon, I'm feeling good about our prospects at the moment.  Even with jackhammers ringing in the background, the season started off on a positive note.

I hope your summer is off to a good start too. 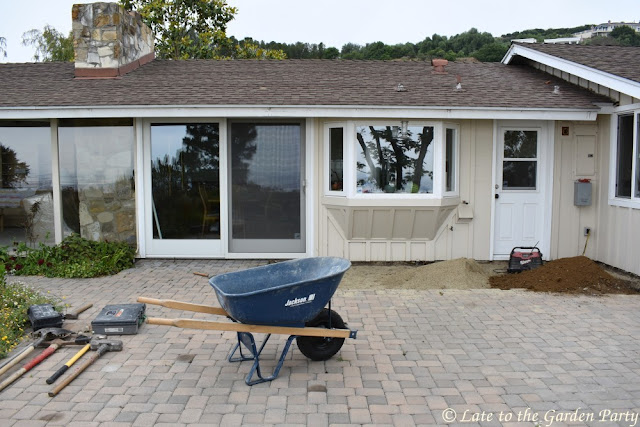 We began to talk seriously about a home remodel almost a year ago.  On the table was gutting our existing kitchen, an earthquake retrofit, new flooring, and installation of a new HVAC system.  After discussion with a contractor and a designer, my husband proposed a plan that, among other things, involved expanding the kitchen's tiny footprint by pushing out the exterior wall by 5 feet into the back patio.  Perhaps that doesn't sound like that big a deal but we live within a designated open spaces hazard zone.  In fact, the boundary of that zone runs diagonally through our house.  Obviously, that designation didn't exist in 1951 when the house was built but we were aware of it in vague terms when we bought the house.  The thing is, the city proposed pushing that boundary well beyond our property line in 2012, a couple of years after we bought the house.  However, in 2018 when my husband paid the first of many visits to the city's planning office, he discovered that, while the proposed change "could" happen by the end of that year, it wasn't yet in place.  Rather than wait and see, we went ahead with the city's required evaluation process.  After a geological survey, securing approvals from parties including the local school board and the fire department, and outlays amounting to several thousand dollars, we finally got general approval to proceed last December.  To date, the city still hasn't moved the hazard line.

Discussions with an architect, the contractor, the designer, a cabinetmaker, and construction specialists of all kinds followed.  More approvals, including one from the Air Quality Management District, were required before, at the end of May, we finally got our construction permit.  In the meantime, my husband had begun his own preparations, starting with construction of a temporary kitchen tacked on to the back of our house.

A week ago we started clearing areas for the construction workers, including both our patios.


All that stuff had to go somewhere.

The driveway is now outfitted with a storage pod and matching port-a-potty. 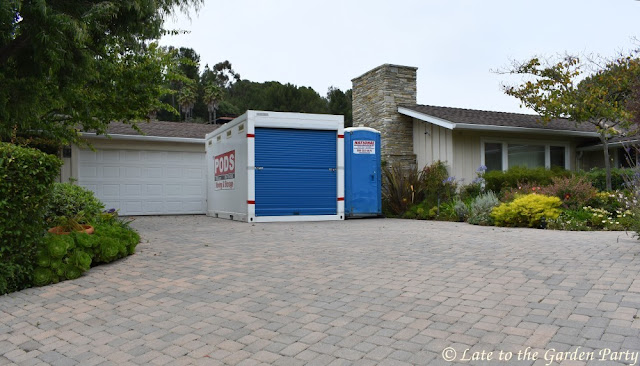 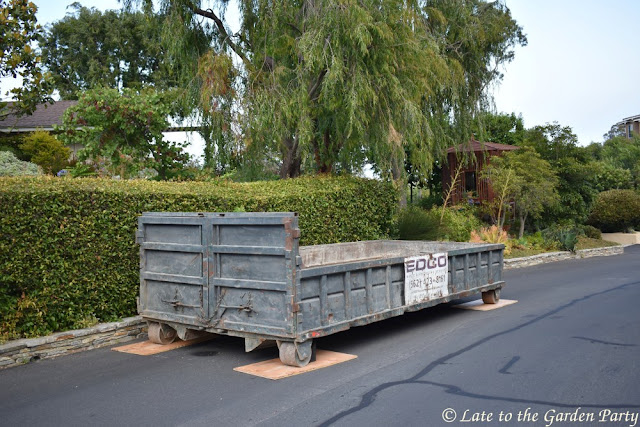 And the long-awaited construction began today with the removal of the portion of the back patio necessary to create a footing for the kitchen extension. 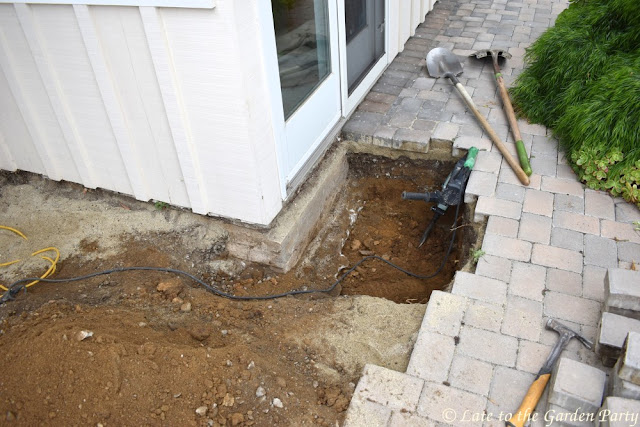 Our contractor estimates that it'll be 2 weeks yet until the kitchen wall comes down.  The city requires that the depth of the new footing extends 2 feet below the existing foundation.  As we're sitting on bedrock, that means a lot of digging and jackhammering before the concrete can be poured.  It's going to be a long 4 to 6 months.