Favorite plants shared with the bees

One of the new plants I picked up recently was Gaillardia x grandiflora 'Arizona Apricot.'  I passed by it a few times on my last visit to Roger's Gardens.  There was really no good reason for me to buy it as it looks remarkably like G. aristata 'Gallo Peach,' which I already have, but when I saw that the bees just couldn't leave it alone, the plant landed on my cart and, soon after, in my garden.

I previously featured G. 'Gallo Peach' as one of my favorite plants, although I did so as part of a post-script to my February Bloom Day post so the plant received little special attention.  'Gallo Peach' is also a bee favorite.  The two plants are remarkably similar in color, although 'Arizona Apricot' appears to have slightly taller stems and an added trace of orange in the petals that 'Gallo Peach' lacks.

They're both eye-catching plants but somewhat less vivid that G. 'Goblin' and G. 'Arizona Sun,' which also have a place in my garden.

Gaillardias are heat and drought tolerant.  They re-seed freely and the bees love them.  All those factors make them welcome in my garden.  Despite their strong colors, they also mix well with other plants.

Visit Loree at danger garden to see her favorite plants wrap-up for the merry month of May.  You can see the Gazania I featured as my favorite plant earlier this month here.

Falling off the wagon (again)

No, I don't have a drinking problem but I have to accept that I am a plantaholic.  After our early heatwaves and notice of the new water restrictions to take effect in June, I told myself that I needed to forego any new planting until fall.  Then a friend and I arranged a trip to Santa Barbara Botanic Garden in early May.  The botanic garden has a native plant nursery on-site so I picked up a few things.  I told myself I was just doing my part to support the botanic garden.  However, on our way to lunch afterwards, we stopped off at the Terra Sol Garden Center. 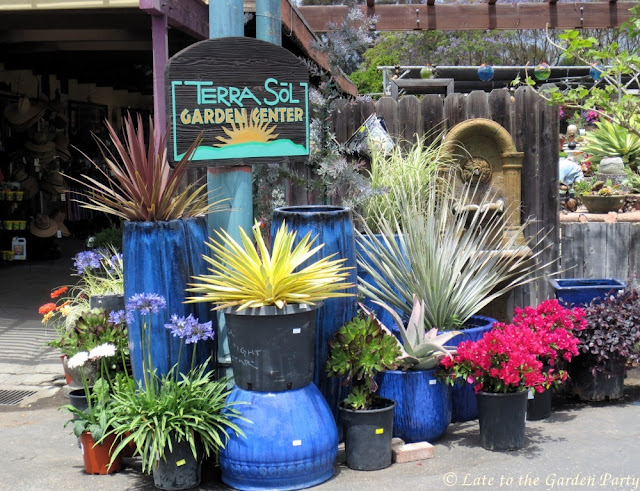 My friend swears that she and I've been there before but I've no recollection of this whatsoever.  It's not a huge place but it was full of succulents, pottery and spring bloomers.

Maybe it was that I was lightheaded because we hadn't yet had lunch.  Maybe it was the unseasonably cool weather, or the fact that we'd had some rain and had reason to believe more might be more on the way.  Maybe it was that I'd already slipped up with my purchases at the botanic garden, or that I was surrounded by eager plant buyers.  In any case, when I saw the huge flowers on Gazania 'Sunbathers Otomi,' my will-power slipped away entirely.

I left the garden center with 3 Gazania 'Sunbathers Otomi,' 3 Agastache 'Sunset,' and a Cuphea.  There may have been more.  It's all a blur.

We stopped for lunch in Carpinteria on our way back south.  Then my friend asked if I wanted to drop in at Seaside Gardens given that it was only a stone's throw away.  On this occasion, I didn't stroll Seaside's wonderful demonstration garden.  I didn't even take out my camera.  I shopped the sale tables.  They had Anagallis 'Wildcat Mandarin,' which I've never found anywhere else.  The plants I'd over-wintered from the prior year had been hit hard by our March heatwaves so it seemed a good idea to pick up a few more.  Why I also picked up a Westringia fruticosa 'Morning Light' I'm not sure.  There may have been a couple more things - I'm afraid I don't have a clear recollection.

As we neared my friend's home, we felt we had to stop at Sperling Nursery.  After all, the property is for sale.  It could be my last opportunity to take advantage of their excellent selection of plants.  My friend picked up a Salvia leucantha with gray foliage and bright pink flowers we'd never seen before, labeled 'Danielle's Dream.'  There was one more on the table, not yet blooming, but how could I leave it behind?  Yes, of course, I picked up a few more things - after all, I already had a cart to carry 'Danielle.'

My local botanic garden hosted a show and sale by the South Coast Geranium Society the following weekend.  My friend had been looking for some Geranium 'Rozanne' so I felt I should stop by on her behalf as the botanic garden is so close.  They didn't have 'Rozanne' (or any true geraniums) but they had some interesting Pelargoniums at very reasonable prices.  And Pelargoniums are drought tolerant.  I brought a few home.

Last weekend, I decided to stop by Roger's Garden in Orange County to hear a presentation on Mediterranean plants.  Roger's is easily a 2-hour round trip for me so it just made good sense to have a thorough look around while I was there.


As some of the plants in my front beds were struggling, I thought I'd look for Artemisia to replace them, since those should be able to handle whatever summer throws at them.  I also thought I'd look for Eustoma grandiflorum 'Borealis Blue' as the plants I'd over-wintered weren't doing as well as I'd like and I hadn't found double-flowered blue Eustoma anywhere else this spring.  I found both.  You'd be amazed if I'd stopped with those purchases, wouldn't you?  I didn't.  My birthday is coming up, and birthdays are a good excuse to break one's rules.  No, I didn't take a photo of the trunk of my car as I've done in the past.  That would only have made me feel guilty.  But here are pictures of a selection of my new acquisitions from the various sources I've described.


In my defense, I bought a lot of plants in inexpensive 6-packs, including those shown below:

I've also been planting a lot of cuttings this season.

I even have seedlings that have, thus far, survived the scourge of raccoons which continue to visit me on a regular basis.

Yes, I admit I have a problem but I really think I've just about got it under control...

In a Vase on Monday: Abelia Sets the Tone

I thought I'd do something with Agapanthus this week as they're in plentiful supply, although I was also drawn to the orange tones in my garden and found myself considering what I could do with those.  As it turned out, I didn't follow either of these directions.  I cut some Abelia x grandiflora and that dictated the color scheme for this week's vase, prepared in connection with the meme hosted by Cathy at Rambling in the Garden. 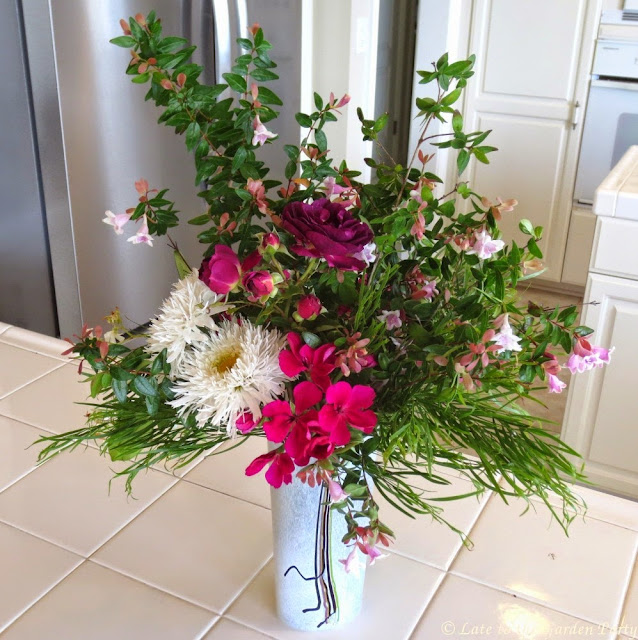 The short stems I had left over went into a small vase with a lighter pink double-flowered Pelargonium peltatum that didn't fit in the main vase. 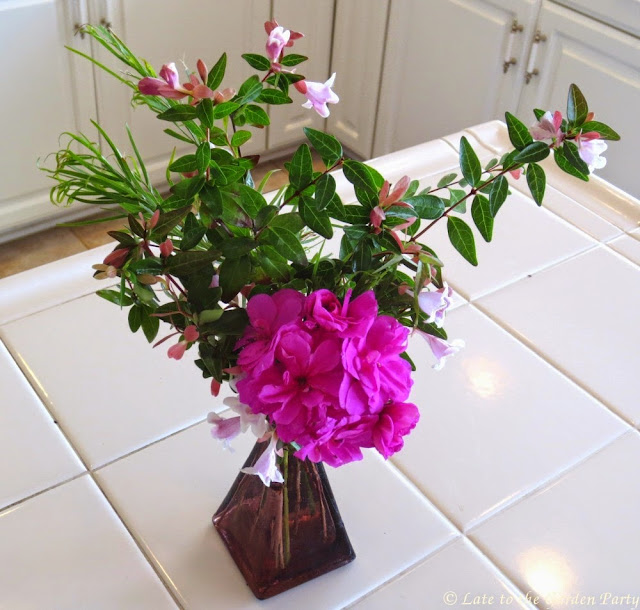 I put the small vase on the mantle in the master bedroom but the light under our "May gray" skies made it too difficult to photograph.  The larger vase landed on the dining room table, where I can enjoy its delicious fragrance.

Visit Cathy at Rambling in the Garden to find more vases constructed from what's collected from the garden.  Best wishes to those of you in the US recognizing Memorial Day!

Gazanias again?!  Where did my current fixation with Gazanias come from?  Prior to this year, I didn't give any member of this genus a second glance.  Part of the current attraction is the plants' heat and drought tolerance.  I'm completely obsessed with California's drought and its impact on the future of my garden at the moment so any plant that tolerates a degree of drought gets extra points straight out of the gate.  But there's more to it than that.  The new hybrids aren't my grandmother's Gazanias. (Not that either of my grandmothers were gardeners.)  They're floriferous eye-catchers.   I previously featured Gazania hybrids 'Kiss Frosty White Flame' and 'New Day Yellow' as favorite plant choices.  The only strike against them in my book was that the flowers close when the sunlight dims.  The new-to-me 'Sunbathers' Gazanias offer the advantage of remaining open even when the sun goes down.*

I discovered Gazania 'Sunbathers Otomi' at Terra Sol Garden Center in Santa Barbara a couple of weeks ago.  I was immediately smitten and brought home 3 plants.

A few Angelonia augustifolia, over-wintered from last year but no longer looking their best, were uprooted to make space for the new plants.  The flower color picks up the pink of the Cuphea ignea 'Starfire Pink' and the bronze of Phormium 'Dark Delight' behind them.

The new flowers look more red than pink to me when they first open but, as the photo at the top of this post shows, the petal color fades as the flower ages.


The semi-double flowers have a crested center that becomes more bronze as the flower matures.  They're approximately 4 inches (10 cm) in diameter when fully open.  The plants have the attractive, strappy gray-green foliage of my other Gazanias.  They reportedly grow about 8 inches (20 cm) tall and wide.   Many growers classify them as half-hardy annuals but they should be short-lived perennials in my climate.  In addition to taking heat in stride, they're said to tolerate light frosts. 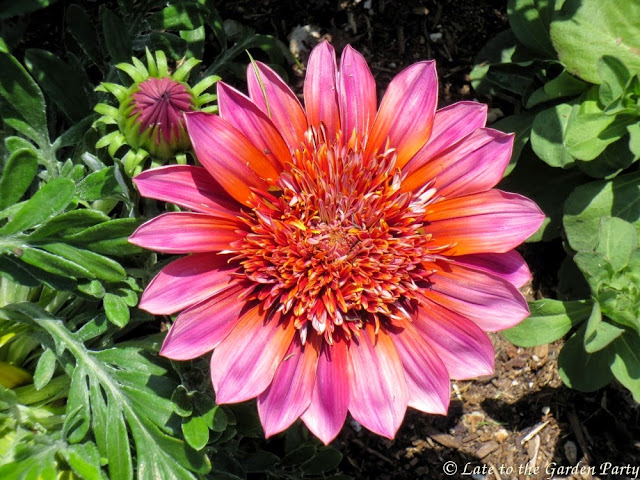 For other gardeners' favorite plants, check out Loree's monthly favorites wrap-up at danger garden next Friday.

*Update: Today was mostly cloudy and I noticed that, although the Gazania 'Sunbathers Otomi' flowers don't entirely close, the outer petals do curl around the flower's crested center.

What are my chances?

I have a seedless 'Red Flame' grapevine growing over an arbor at the back of my dry garden, near the steps to my back slope.  Last year, I took these pictures of the ripening grapes on June 11th. 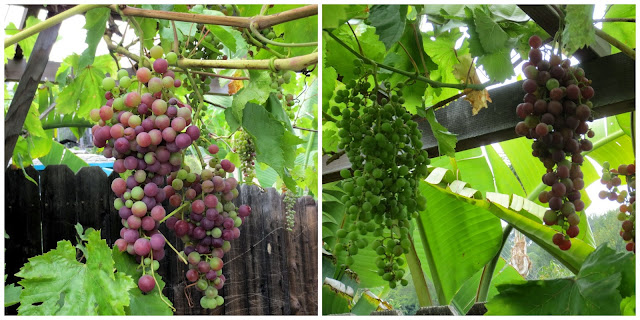 One week later, I took these pictures: 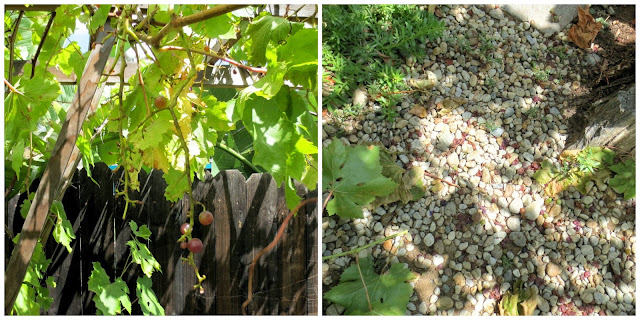 I knew I was pushing my luck last year but there were so many grapes I thought that surely the critters wouldn't eat them all before they were ripe.  But they pretty much did.

This year, my grapes are still very green but, once again, there's a plentiful supply on the vines. 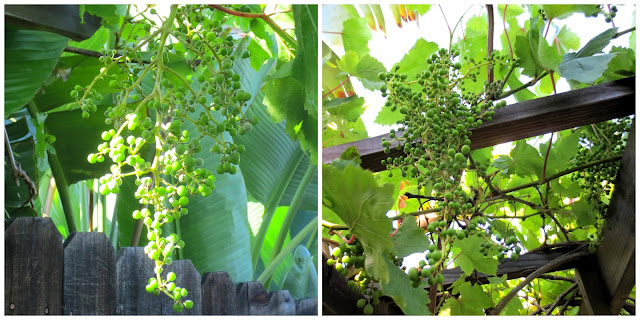 I've been trying to come up with something that might keep the birds and raccoons from picking the stems clean without the cumbersome process of netting the entire arbor.  Today, while shopping for groceries, I found some inexpensive, reusable net bags.  They're intended for use in keeping vegetables in the refrigerator but I picked them up on spec to see if they might be helpful in protecting my grapes. 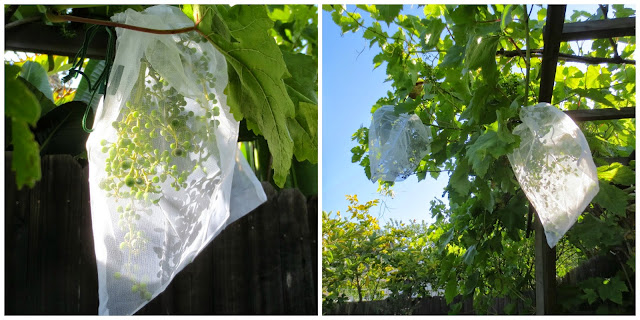 My husband thinks my chances of success are low.  And I'd need to buy many more bags just to protect the largest clumps of grapes. 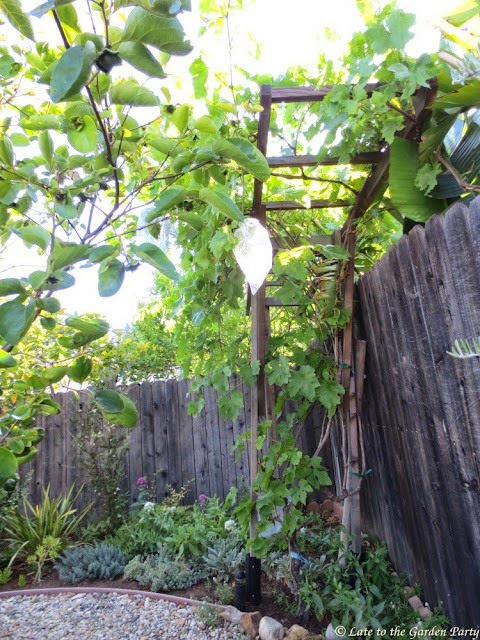 What do you think?  Is it worth a try?  Have you found ways to protect your fruit as it ripens?

I haven't even begun to think about what to do about the persimmons. 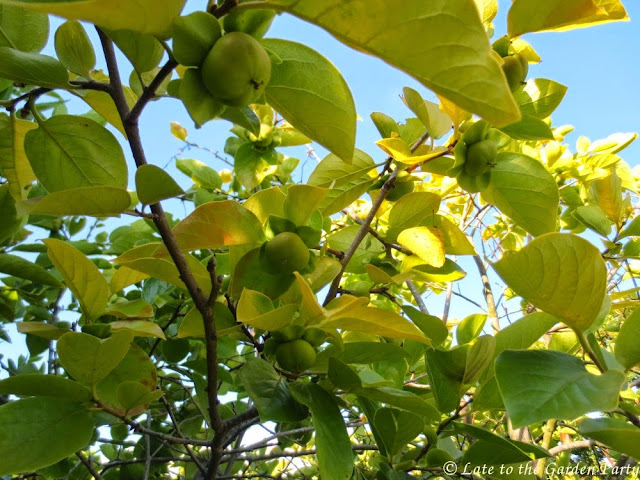 Email ThisBlogThis!Share to TwitterShare to FacebookShare to Pinterest
Labels: grapes

In a Vase on Monday: Split Personalities

For this week's "In a Vase on Monday," the meme hosted by Cathy at Rambling in the Garden, I have 2 vases with very different personalities, although they have one flower in common.  The first vase, featuring Gaillardia x grandiflora looks more autumnal than spring or summer-like. 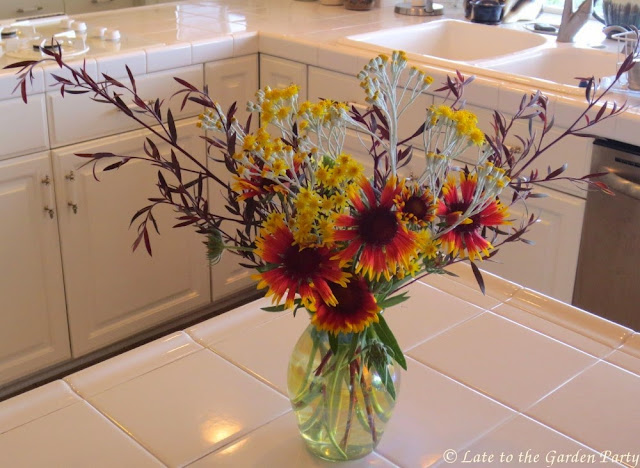 The second vase, although taller, has a lighter, more summery feel.  It's similar to the bouquet I featured 2 weeks ago except that it includes a bolt of cheerful yellow. 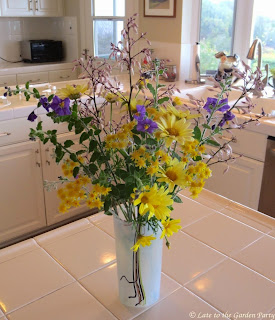 
Here are the 2 vases in place:


Visit Cathy at Rambling in the Garden to see more vases constructed of materials selected from participants' own gardens.