Every year, I impose a rule against planting anything other than succulents during the summer months.  And pretty much, every year I break it.  I'd already reinterpreted my own rule to include an exclusion for bromeliads as well as succulents but late last week, on a trip to my local garden center, I just ignored it entirely.

I went to the garden center to pick up additional mulch but I came home with more than just mulch.  However, I'd like to note that one of the plants I brought home is a succulent.

I also brought home three Gomphrena.  Now this particular Gomphrena is an annual.  When I think about it, my rule should have had a special proviso addressing annuals.  They're not expected to last more than a season so, as long as the annual in question is heat tolerant, I should've had a summer-planting exception for that.

But my third purchase can't be justified as easily.  In my defense, I've been looking for reasonably priced specimens of the plant in question for a year now.  Last year, it was new to the local garden centers and pricey.  I bought one and have looked for more ever since.  They haven't been widely available here and, when I've found them, the price has made me choke.  So, when I found one-gallon containers for what I considered a very reasonable price, I had to bring home three.

Of course, none of these justifications can be used to explain this:

Oh well.  Rules are made to be broken, aren't they?  I usually wait until September to blatantly ignore my self-imposed rule but I got an early start this year.  Between winter's pitiful rainfall and July's nuclear heat blast, it's been a tough year for the garden and it's hard not to want to step in to "fix" it.

I'll be doing planting my new arrivals this weekend as well as potting up some rampant seedlings, which is a fine way to spend my time.  However you spend the extended holiday weekend, I hope you enjoy it!

Wednesday Vignette: Too much of a good thing?

In October 2014, I picked up a one-gallon pot of Barleria obtusa at my local botanic garden's fall plant sale.  In 2015, it had reached a modest size and flowered nicely.  In 2016, it looked even better but in 2017 I began to have some concerns that it might be a trifle too exuberant.  However, I adore plants with blue flowers and the Barleria blooms profusely so I was willing to forgive a lot. 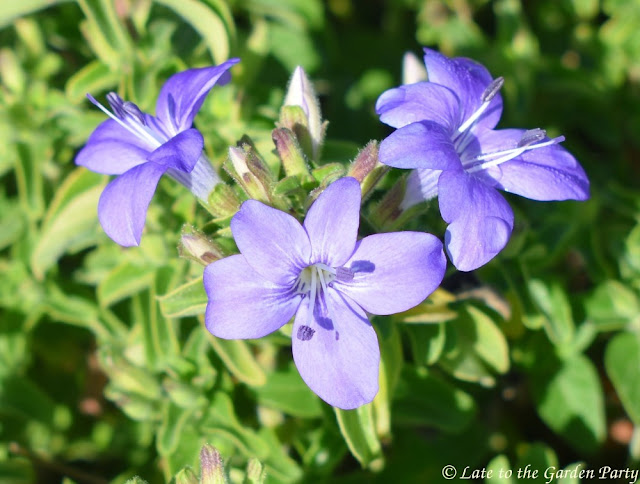 At the end of its bloom period last November, I cut my largest plants back hard, even as I transferred some of their seedlings to new areas.  Despite being cut to a height of 6 inches or less, the original plants have already exceeded their mature size last year.

Plants that were mere seedlings last year have also assumed a respectable size.

And I continue to find seedlings all over my garden.

But when I saw this I began to wonder if perhaps I've made this plant too welcome in my garden.

Pulling back a bit, here's a better view of where I found this seedling.

At one time I had a vague plan to use the chimenea as a plant container but that task never rose to the top of my project list.

I haven't decided what to do with either the chimenea or the plentiful supply of Barleria seedlings I have on hand but I feel as though a pushy Mother Nature is nudging me along.

This is my Wednesday Vignette.  For others, visit Anna at Flutter & Hum.

In a Vase on Monday: Dueling Dahlias

With dahlia buds opening on a daily basis, those flowers currently demand to be cut.  As it is, I don't get around to cutting some of the flowers before they fade, even when I refresh the dahlias in my vases mid-week.  Not that I'm complaining!

Dahlia 'Loverboy' has sat on the sidelines for a couple of weeks now so it was time to bring him back on the public stage.  Blue Eustoma has been hanging out in her bed so long she's looking ragged so there was no serious thought to having her join him this time.  Fortunately, some new blooms were available to perform roles as companions.


While 'Loverboy' is keeping a lower profile this year, 'Punkin Spice' is living large.  His companions are more diverse and exotic than those 'Loverboy' hangs with.  With his flamboyant personality, it's hard to conceive of him keeping steady company with anyone, though.

To see what kind of drama other gardeners have found in their gardens this week, visit our IAVOM host, Cathy at Rambling in the Garden.

This week I felt the first subtle signs of the seasonal shift toward fall.  The days are perceptibly shorter.  Evening temperatures are cooler.  The marine layer, although thin, was present more mornings than not.  No plants have been newly incinerated by intense sun exposure.  The neighborhood kids returned to school.  And the late afternoon light accentuates everything it touches.

The peppermint willows at the southwest end of our lot create a natural sun screen.

In the lath house, the new sun screens my husband built seem to be doing the trick in protecting my burgeoning shade plant collection.


Am I suffering from a delusion that summer is reaching its end?  Almost certainly.  Summer's high temperatures can easily extend into late October and even early November here.  We toured our current house for the first time during a nasty heatwave in early October nearly 8 years ago - I had to beg my husband to get out of the car when we arrived.  It's reasonable to expect we'll get another blast of heat or two before summer bids its seasonal farewell.  I don't plan to cut back the foliage burned in July for another month or so yet, much less start replanting the areas left bare by summer's brutality, but I'm enjoying the first signs of fall in the meantime.  Fall's arrival means winter is coming and the prospect of our first real rain since March 22nd grows closer.

Whether you're continuing to celebrate mid-summer or joining me in anticipating fall's cooler days, best wishes for a pleasant weekend!

Top 10 Blooms in my Mid-Summer Garden

I'm joining Chloris at The Blooming Garden in featuring my top 10 blooms this August.  August isn't a month I usually associate with flowers but, as mentioned in my earlier Garden Bloggers' Bloom Day post, judicious applications of extra water this year have had a major input on the floral output.  We haven't received our August water bill so I'm not yet feeling as terribly guilty as I'm afraid I may feel soon.

Winnowing down the flowers in my garden to 10 selections wasn't easy.  The sheer volume of bloom was a major factor in my choices.  The current condition of the flowers was another, as was their photogenic qualities, but ultimately it's an emotional decision.

Rosa 'Medallion' was an easy choice because it surprised me by making its first appearance of the year by blooming en masse.  Roses here usually bloom best in spring before our temperatures soar, if they bloom at all.  I had very few rose blooms last year and even fewer this spring after the lowest winter rain levels I've ever measured.

Heteromeles arbutifolia was another surprise.  If this tree-sized shrub was blooming a week ago, I hadn't noticed it but now the blooms can't be missed.

My dahlias were another obvious choice as a favorite but which one can be said to rule my cutting garden is another question altogether.  Each and every one deserves recognition.  Could you pick just one?


The zinnias in the cutting garden also came on with a bang this month but there is one, grown from seed rather than plugs from the local garden center, that impresses me every time I see it.

Have I forgotten my Lisianthus (Eustoma grandiflorum) you might ask?  Of course not but, like choosing a favorite dahlia, the Eustomas that draw my eye shift from one week to another.


A number of more common flowering plants make up the rest of my mid-summer bloom list.

Could you distill the bloomers in your garden down to just 10 plants?  Visit Chloris to find her list.

In a Vase on Monday: Flowers thrown together

My husband and I were gone for 3 days to attend a family wedding in Northern California.  It was a beautiful ceremony and the reception was a joyous celebration but, as we drove to and from the event and returned late Sunday afternoon, the trip felt harried.  There was little time to put one vase together, much less two, for "In a Vase on Monday."  That didn't stop me but the quality of the arrangements - and my photographs, all taken in the early evening - suffered.

Roses (!!!) bloomed en masse on a few shrubs during my absence.  My 'Medallion' roses hadn't bloomed at all this year - and they chose to do so while I was gone.  I could joke that I need to go away more often but the blooms are actually a response to the deep watering I've been giving them at intervals over the course of the last several weeks.  I've been seriously contemplating pulling them all out and this was my last ditch effort to see if they could earn their space in the garden.


The dahlias in my cutting garden also bloomed like crazy in my absence.  Most of the 'Otto's Thrill' variety were already past their prime but I was able to cut two of the first blooms of 'Strawberry Ice', one of the new varieties I purchased this year.


This post was hastily put together as well but I couldn't miss an opportunity to join my favorite meme.  For more "In a Vase on Monday" posts, visit Cathy at Rambling in the Garden. 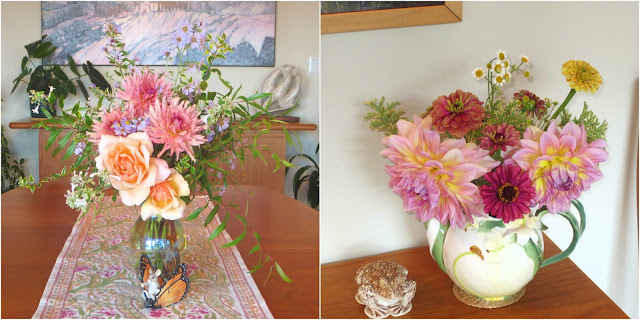