This week, perhaps due to our partially cloudy skies, my eyes were drawn to the most vivid colors in the garden.  In selecting a plant as my favorite of the week to link to Loree's monthly favorites wrap-up at danger garden, I debated a few possibilities, including Callistemon 'Hot Pink' and Calliandra haematocephala.


I settled on Bryophyllum manginii, one of the relatively few plants I picked up during a visit to Roger's Gardens with friends last week.

I remember being tempted by this plant last year and, as it was on "special" when I visited Roger's, how could I pass it up?  I even stopped by my local garden center last week and purchased a Talavera-style pot to put it in.  Although priced well below Talavera norms, the pot still cost more than three times the amount of the plant but so be it.  It needed that pot.

The plant was labeled as Kalanchoe manganii 'Bette's Red Bells,' but it appears that it's now classified as Bryophyllum manginii, although Kalanchoe manginii is listed as a synonym on The Plant List.  One of its common names is chandelier plant, which is a fitting description of its arching flower stems. 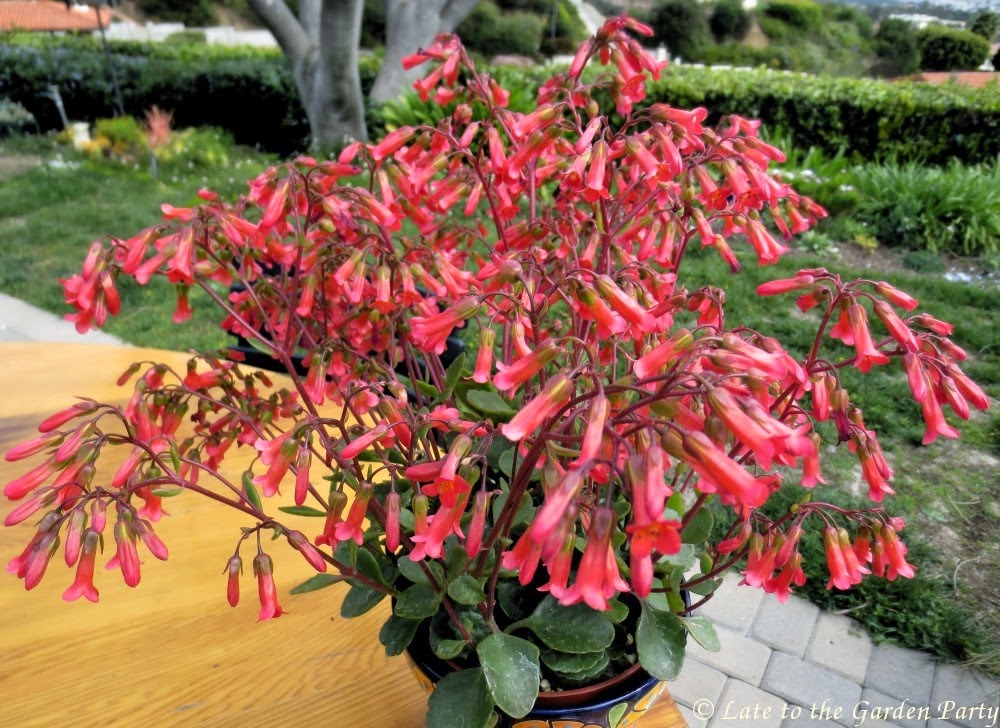 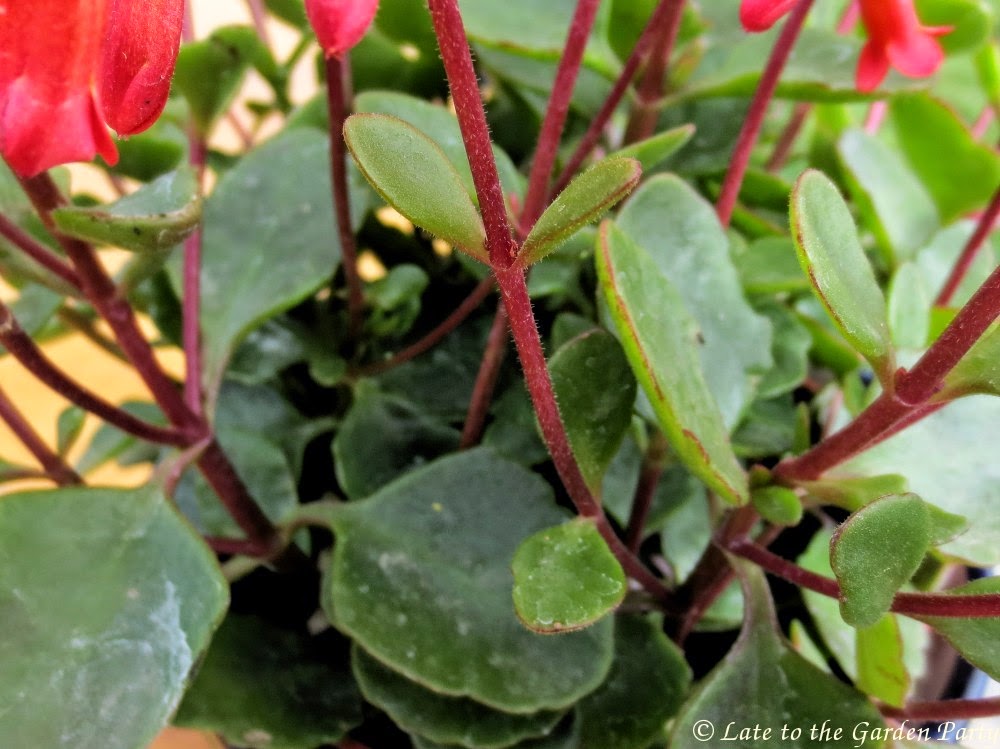 However, the salmon-red, bell-shaped flowers are very pretty, reminding me of those borne by Phygelius. 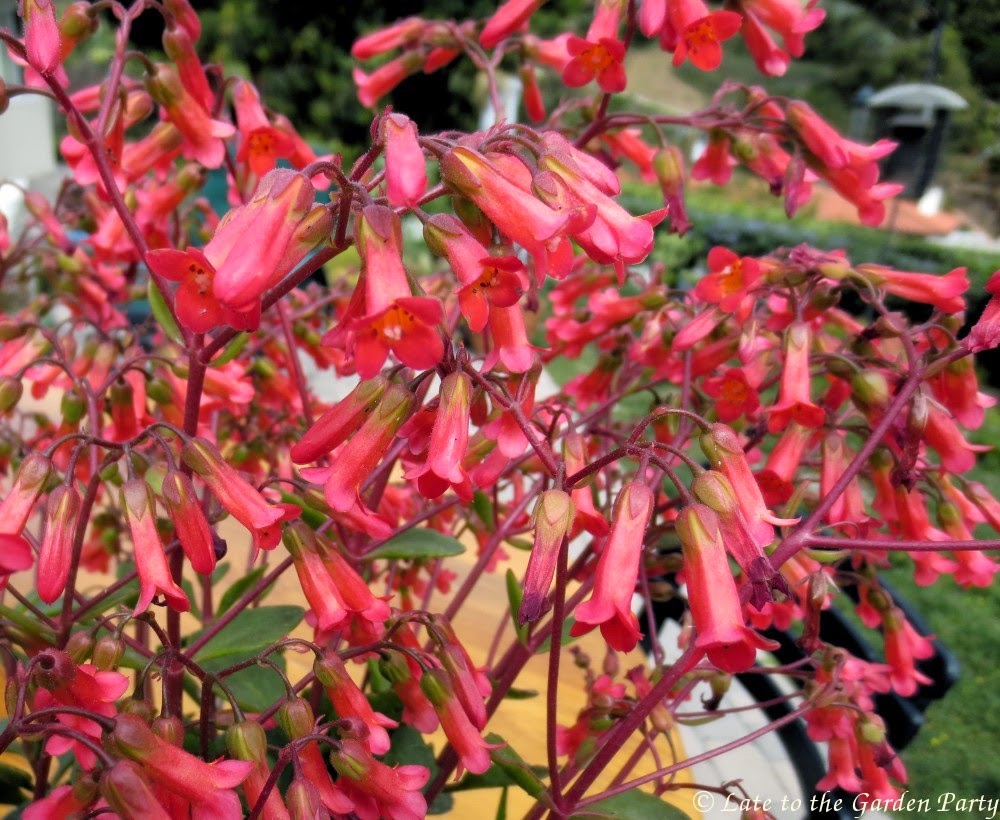 The plant is native to Madagascar and is very tender.  On-line sources indicate that its best kept at temperatures above 50 to 55F (10 to 12C), which means that I need to exercise care with it even here.  Although the plant was shown in full sun and the tag recommended full to partial sun, other sources reference partial shade.  As long as our temperatures remain cool, I'll leave it where it sits on the backyard patio in full sun but, if it becomes stressed or the temperatures jump back up into the mid-80sF, I'll move it to the side yard patio, which gets just morning sun.

This pretty, tender Bryophyllum manginii is my favorite plant this week.  You can see last week's favorite, Gaillardia aristata 'Gallo Peach,' in my Bloom Day Postscript.  It's still blooming its heart out in one of my backyard borders.

Two friends and I made a trip to Roger's Gardens last Saturday.  Two very different displays caught my attention near the entrance.

The first was the installation of a new succulent display garden.  It's another indication of Roger's commitment to a California-friendly plant palette.  The bed was too large to photograph in one wide shot (at least in the presence of customer traffic) so I took multiple shots walking around the circular space. 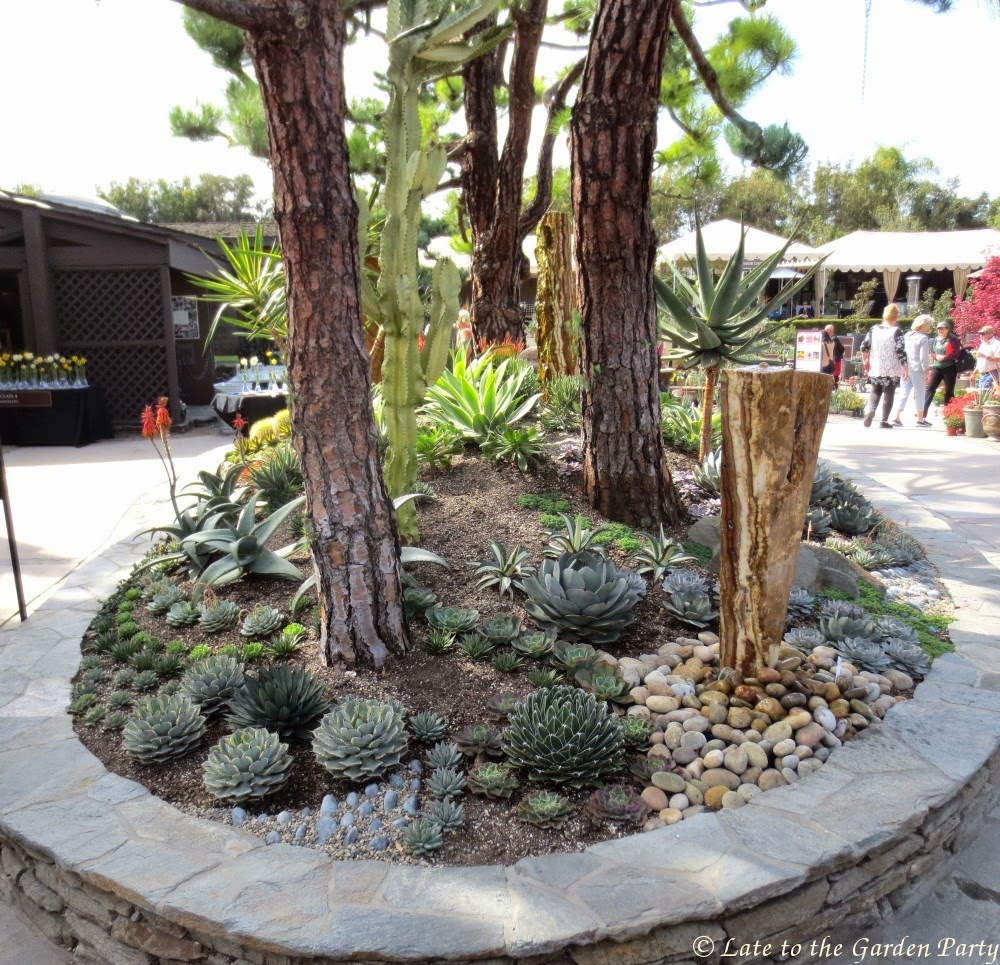 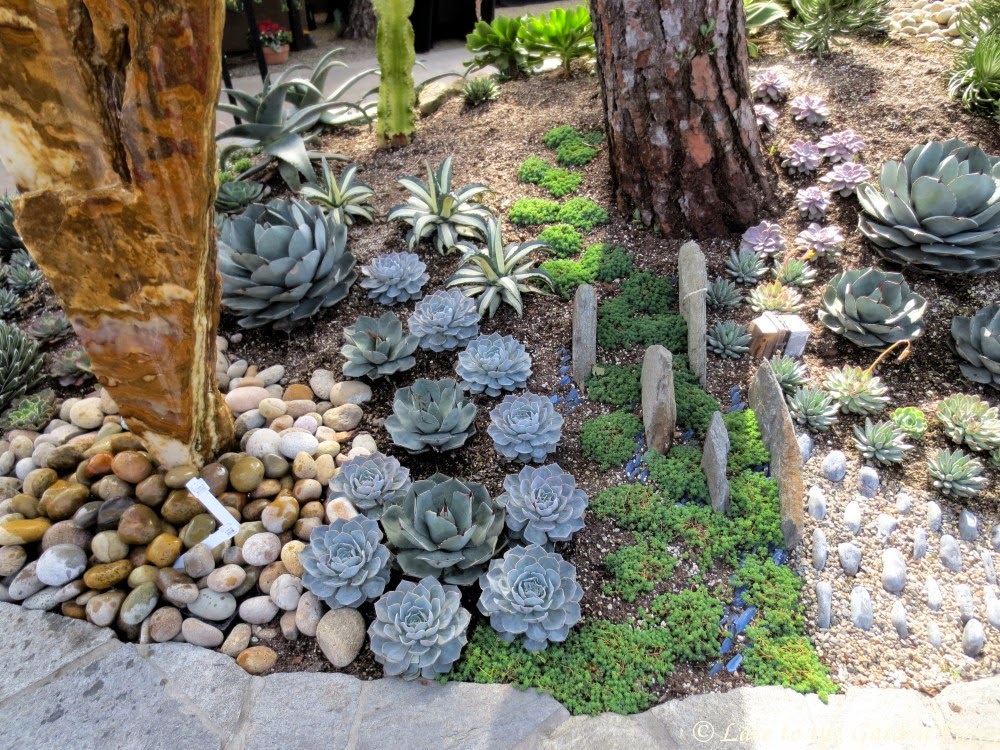 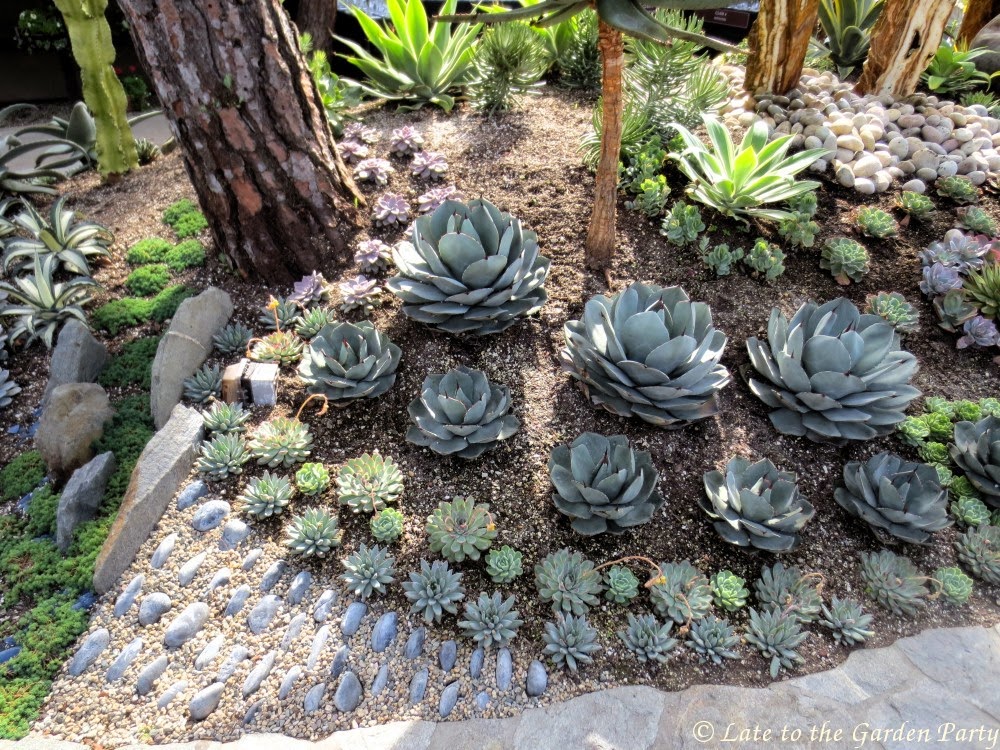 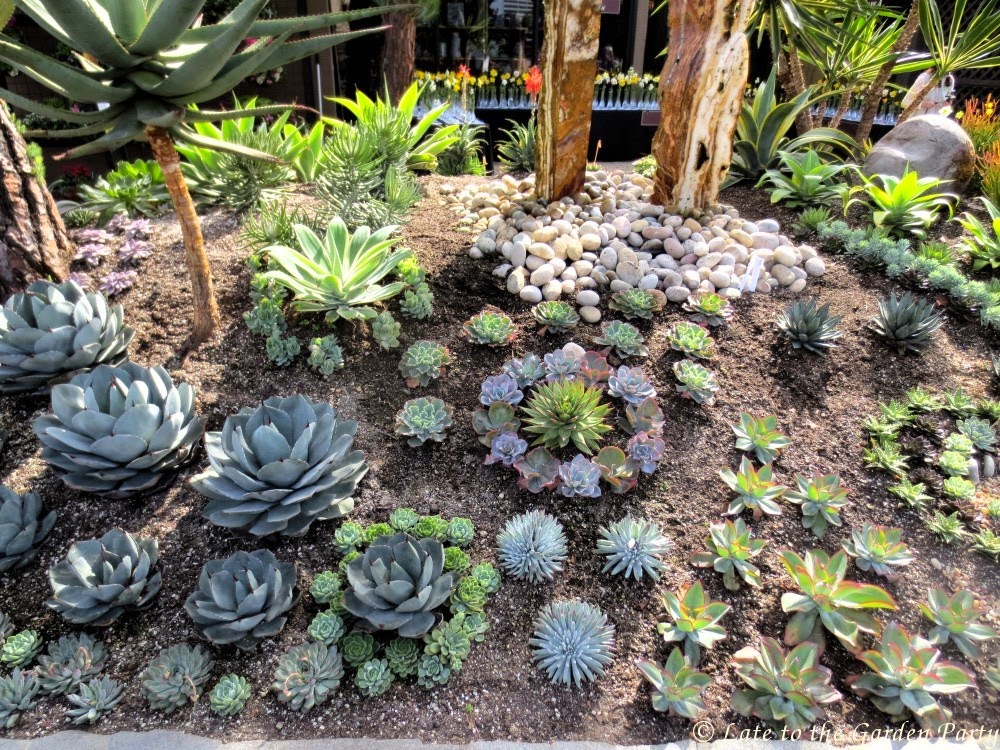 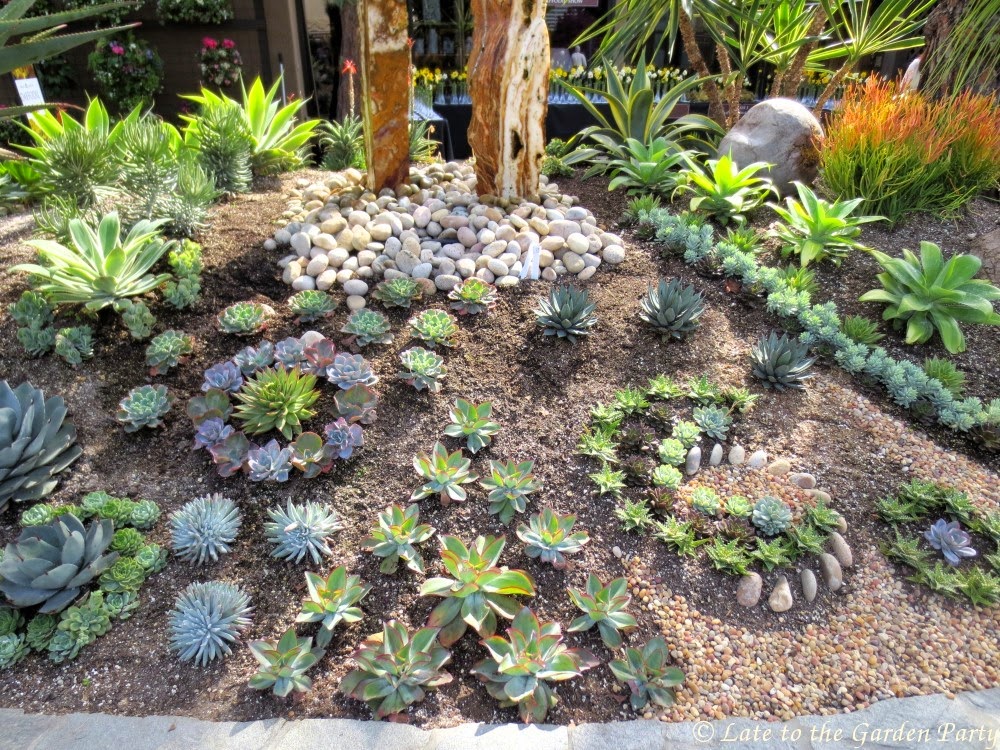 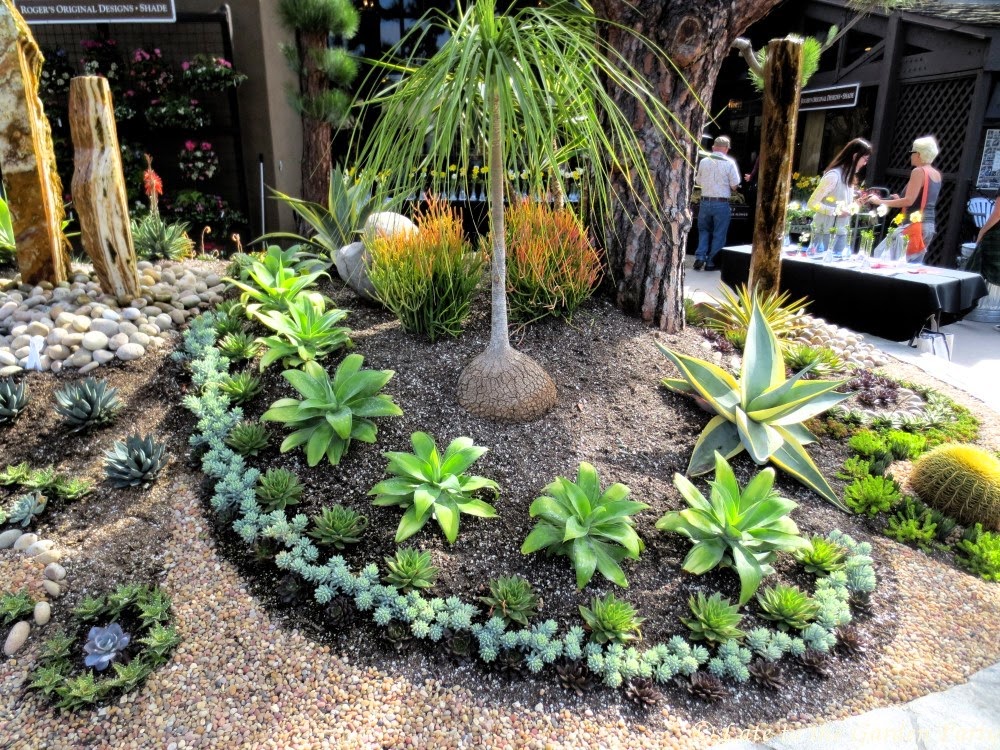 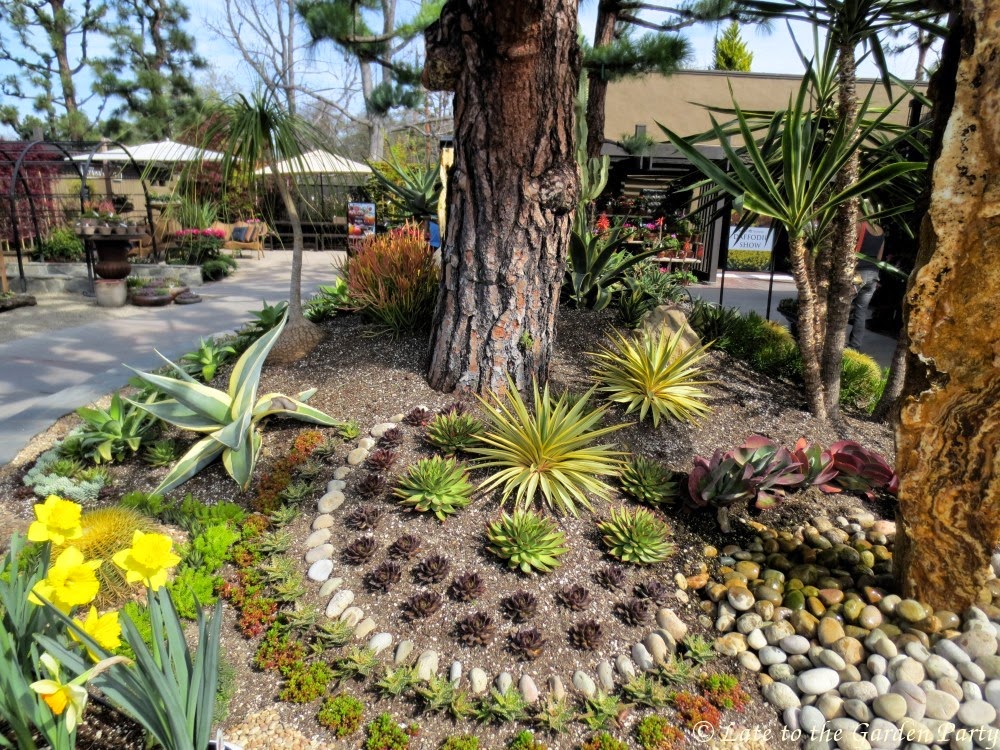 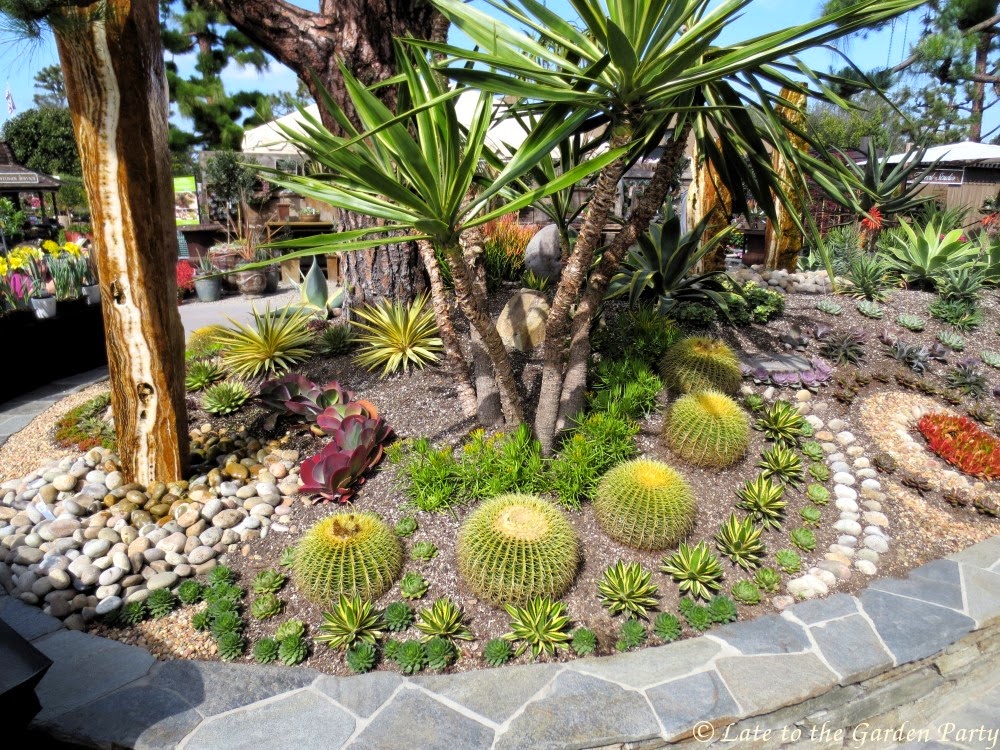 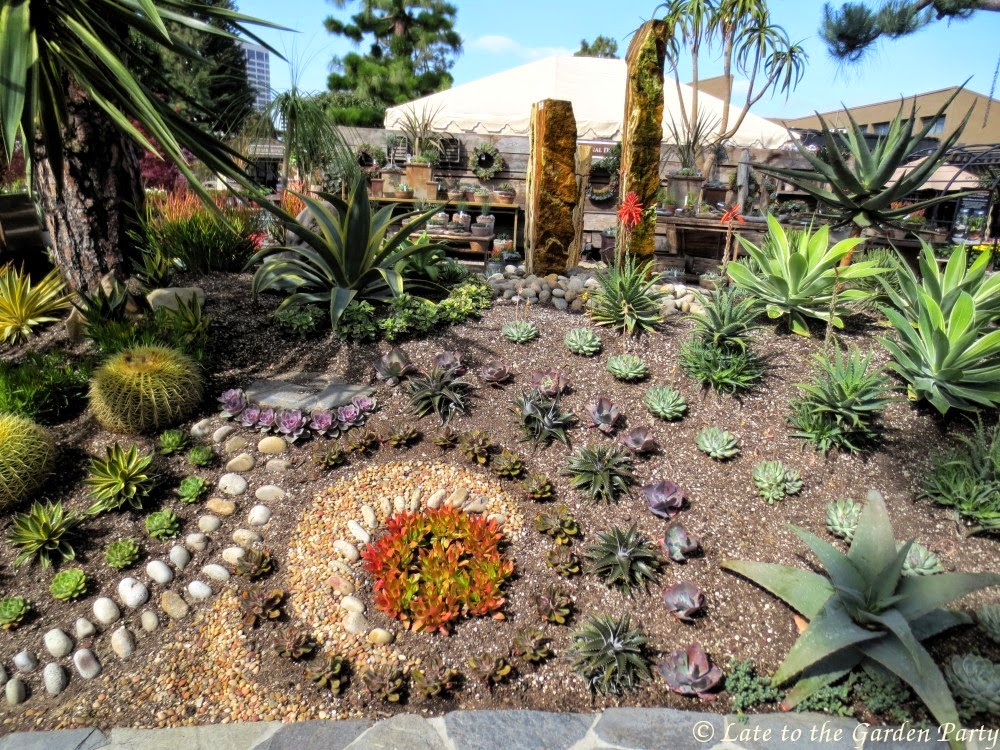 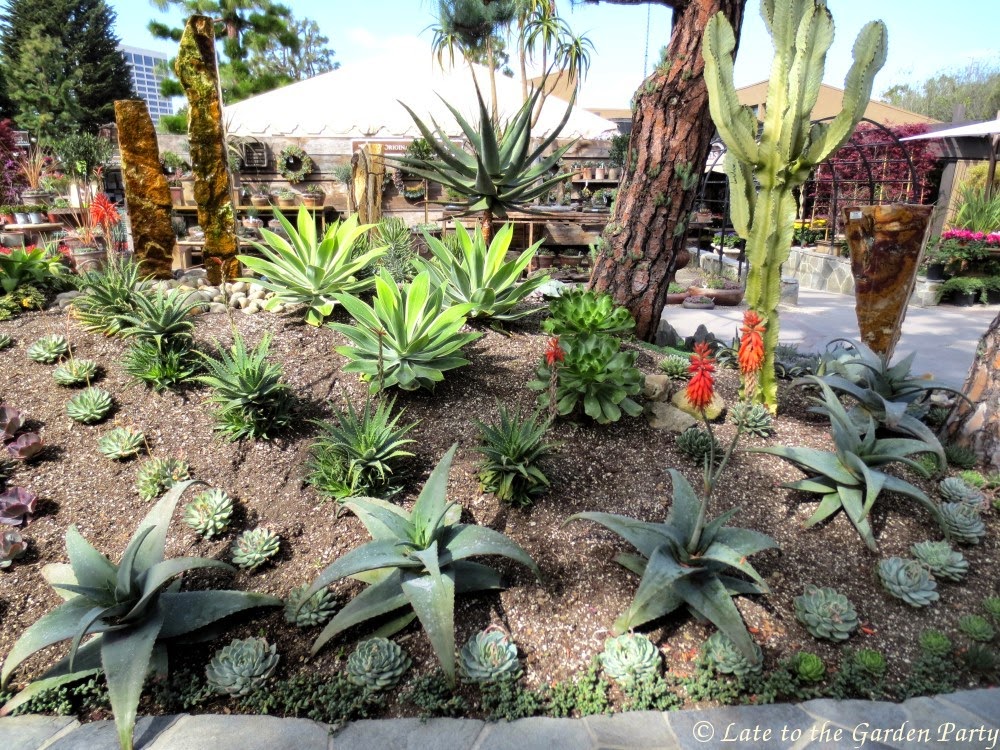 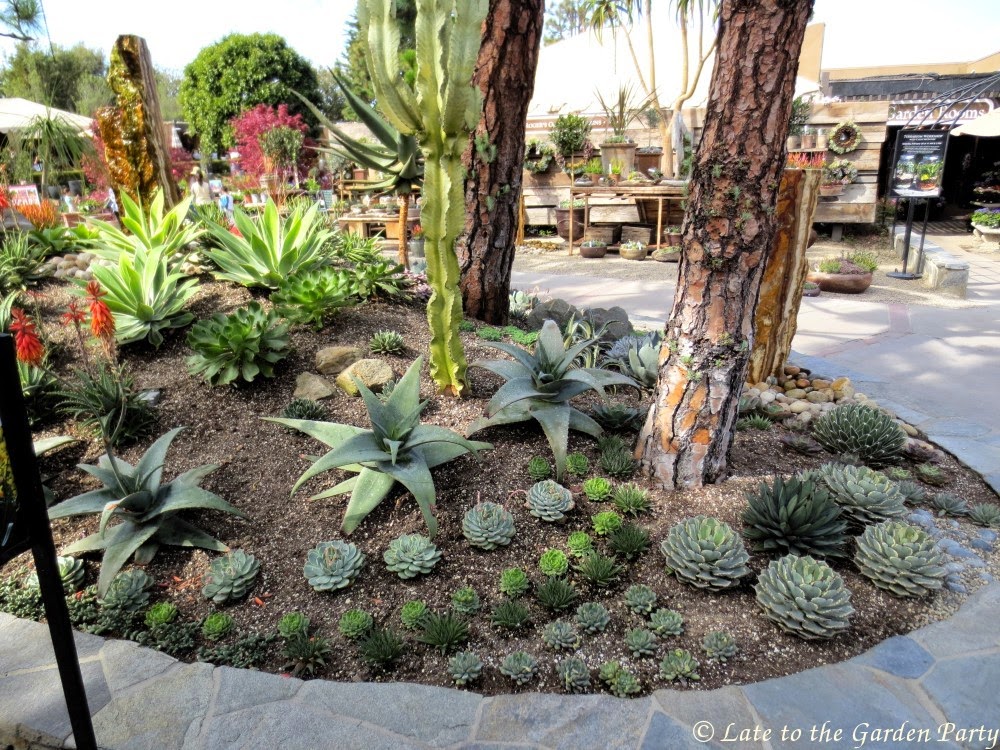 What's your reaction to the layout?  Although I generally prefer naturalistic plant arrangements, I liked the circular and paisley patterns in this bed.  I also liked the use of rocks of varying size, combined in places with smaller gravel.  Although the display is made up of good-sized specimens, I admit that it probably isn't sustainable in the long-term as some of those succulents will get larger still in time but my guess is that it's not meant to remain in place more than 6 months at most.

The other display was a daffodil exhibition.  I love daffodils, in part because most come in my favorite color, yellow, but also because they're an emblem of spring.  I don't have much of a collection myself and I'm not well-versed in their culture but it was fun to have a look at the range of variation among them. 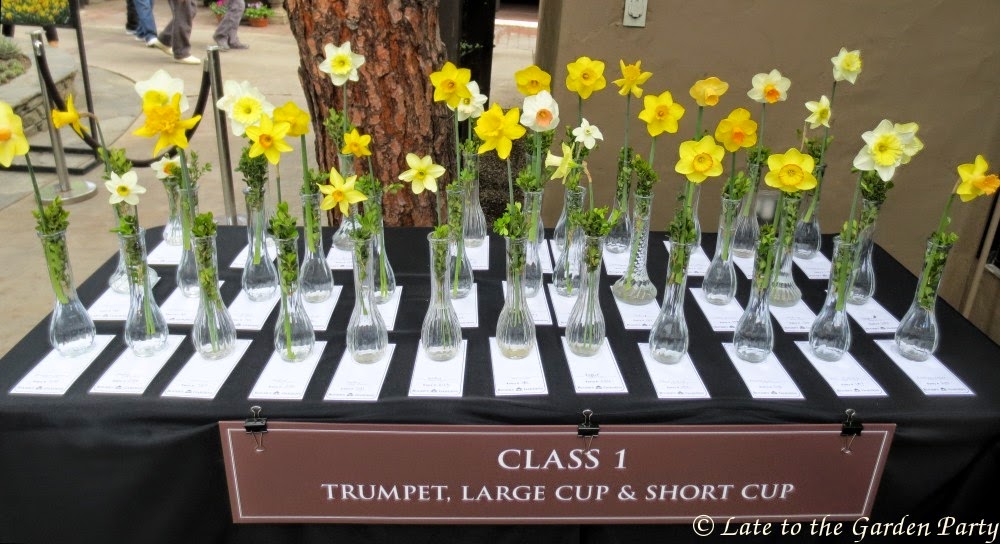 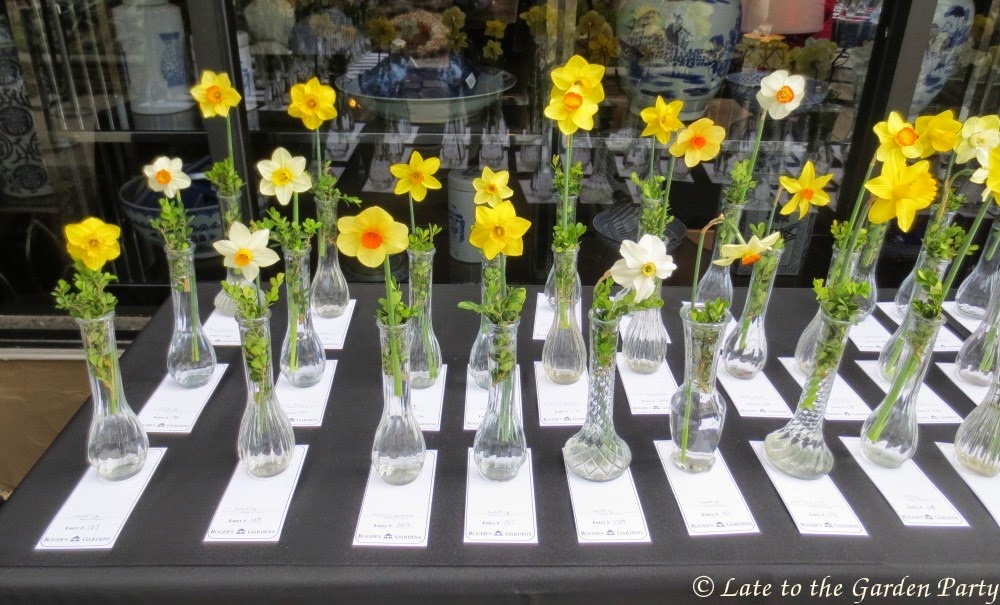 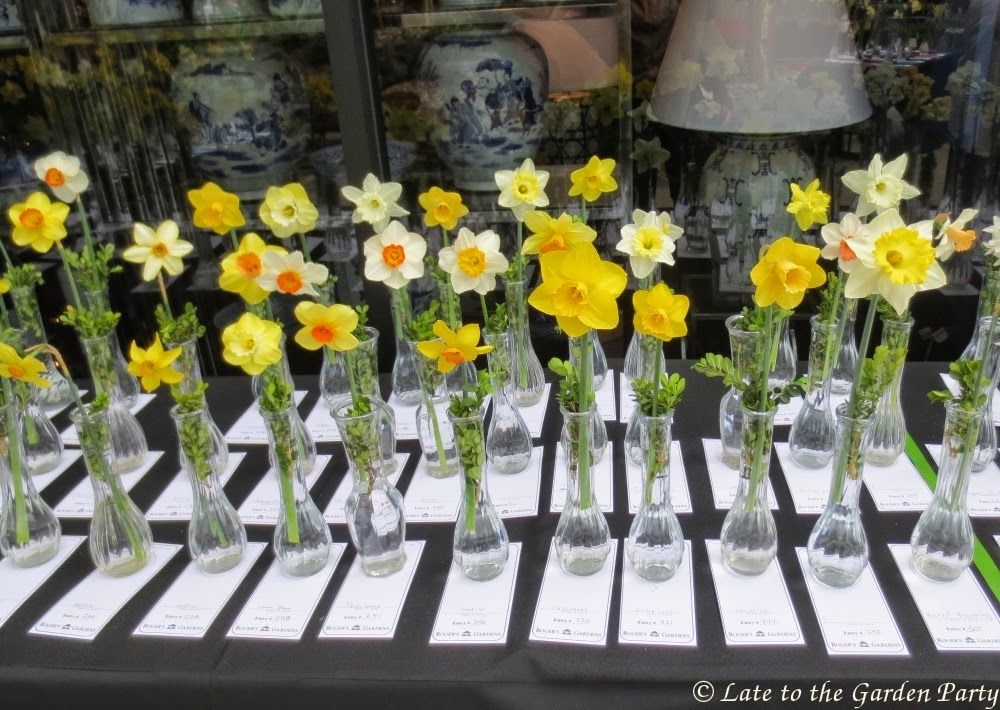 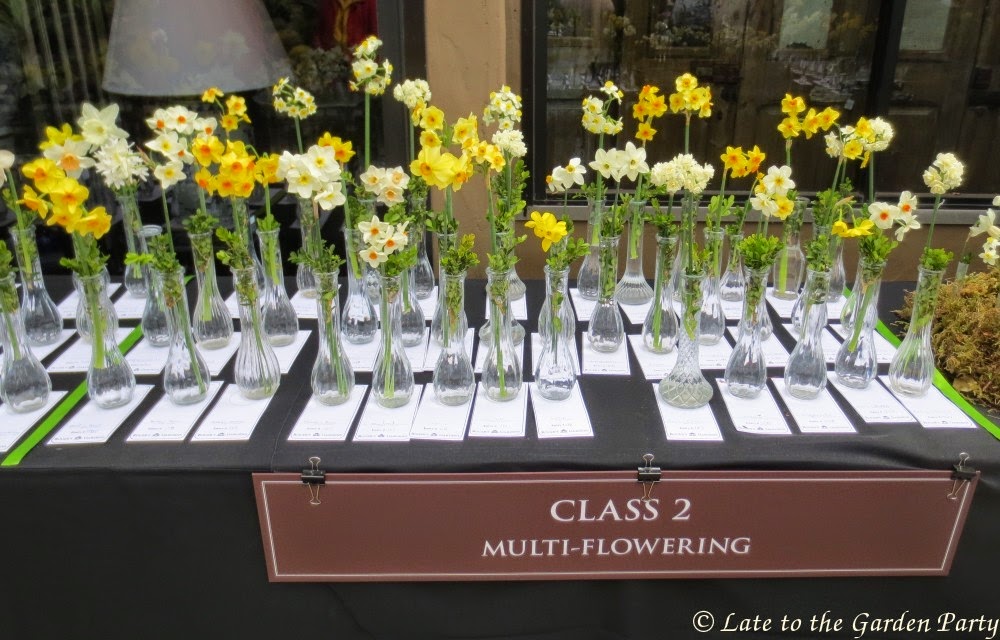 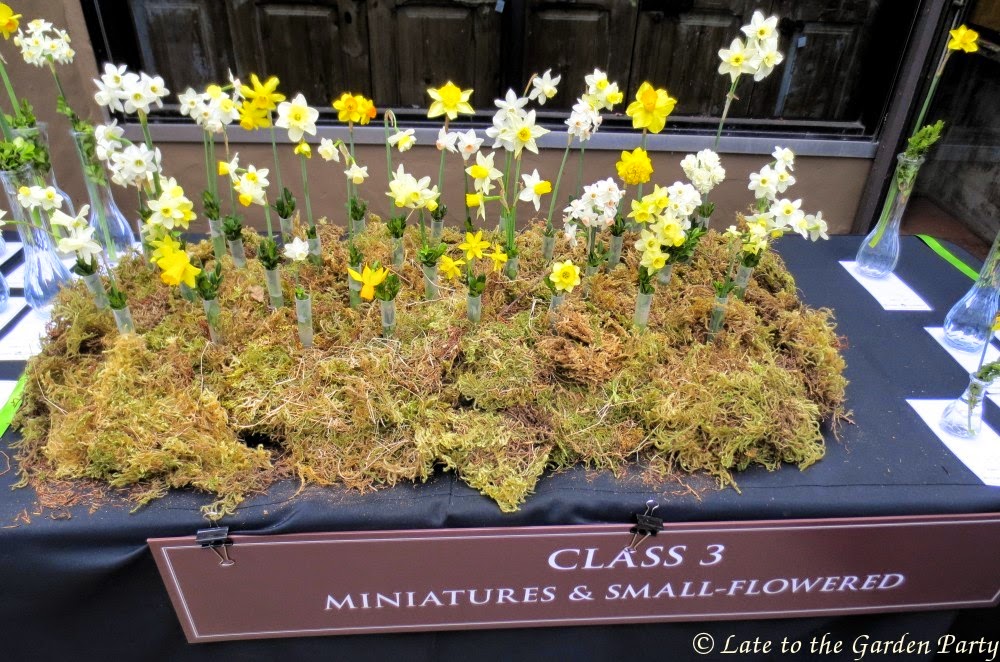 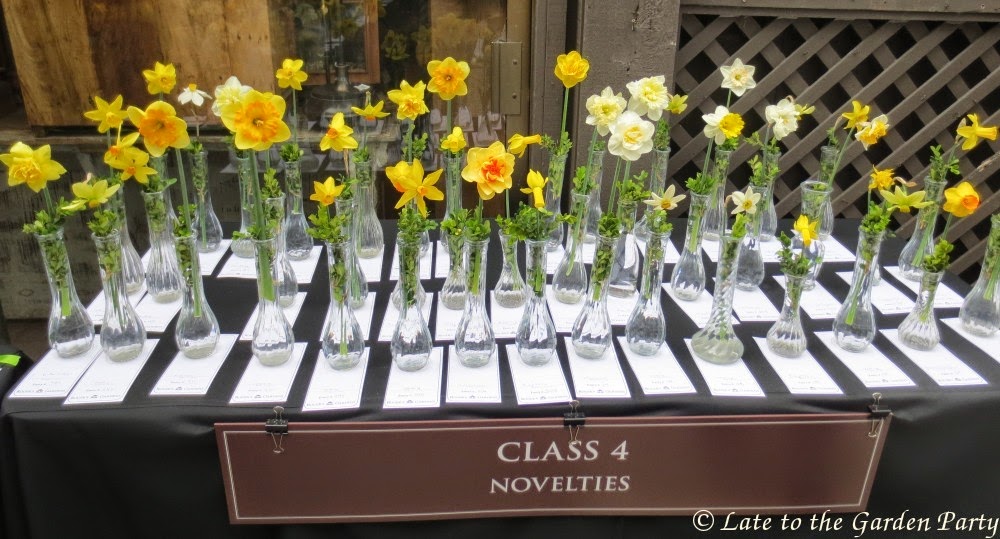 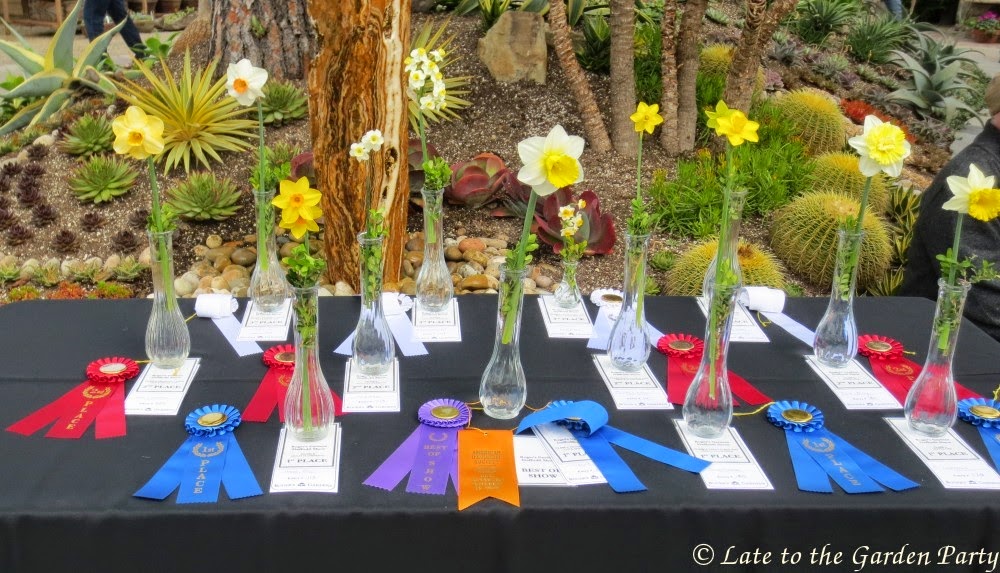 Surprising myself as much as my friends, I didn't buy much on this trip.  Anticipating the pending upheaval associated with taking out a tree in the backyard and cutting back 9 other trees in response to a neighbor's complaint about my garden's obstruction of her view (as previously discussed here), I've felt frozen in place with respect to work in my garden.  Hopefully, after the work is complete on March 7th, I'll be able to refocus on my own plans for the garden.

In a Vase on Monday: A Fight for Dominance

If you've read my last Bloom Day posts, you may realize that I've become obsessed with Grevilleas.  As Grevillea 'Superb' recently bloomed, it seemed a good choice as the centerpiece of this week's vase, prepared in connection with the meme hosted by Cathy at Rambling in the Garden.  (I still can't bring myself to cut the flowers of G. 'Peaches and Cream' but 'Superb' is tucked further out of sight so a vase is a good way to increase my viewing opportunities.)  'Superb's' blooms are very bright and I picked equally bright companions, setting up an unanticipated struggle for dominance as the vase's focal point.


Which flower do you think steals the show in today's vase?  The vase landed in the front entry.  Last week's orchid vase still sits on the dining room table, looking little different than it did last week. 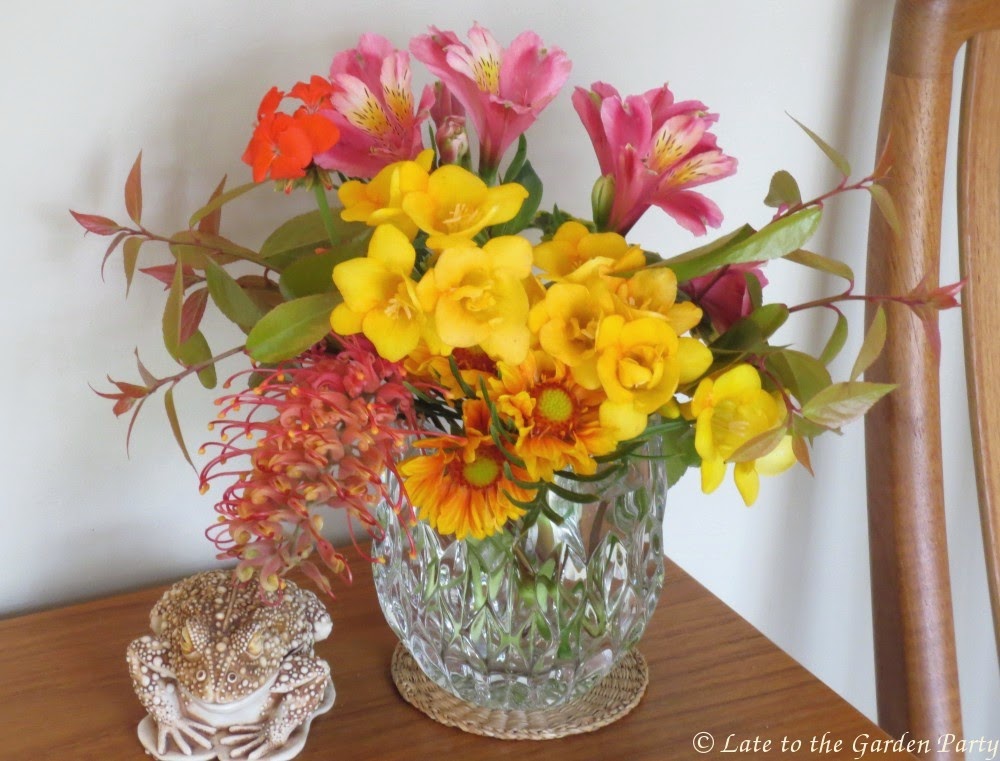 Visit Cathy at Rambling in the Garden to see what she's put in a vase this week and to find links to the creations of other participating gardeners.

Bloom Day Postscript OR Spring Refuses to Take its Time

It never fails that, as soon as I publish my Bloom Day post, I find flowers I somehow missed.  Or, just as frequently, flowers bloom a day or two after the middle of the month.  The number of "misses" is particularly high this month.  The flowers seem to be virtually knocking down the garden gate.  Perhaps this is a response to the spate of unseasonably warm weather we had in the days leading up to Bloom Day - our cool season flowers want their time in the limelight before hot weather gains a foothold here and they have to creep back under cover to prevent themselves from frying.

Here's a taste of what has popped up since I prepared my Bloom Day post:

There are a LOT of buds as well.  Two more Grevillea, 'Ned Kelly' and 'Bonfire', are developing buds, as is my new 'Hot Pink' Callistemon.  There are even buds on my sweet peas.  However, my guess is that the next plant to burst into bloom will be the Ageratum corymbosum - it's close, I think.

I think spring is here.

(My apologies - and sympathy - to those experiencing dreadful weather elsewhere.  I hope you understand that spring needs to be celebrated when it makes its appearance.  That happens on a different schedule for all of us.  Your time will come!)