One of the many challenges posed by the pandemic, especially during the current surge, is that I don't get out much.  Basically, my only trips since mid-December have involved shopping for groceries every two weeks.  I haven't visited my local botanic garden or my local garden centers.  I also haven't done much planting, even though our cool season is generally the best time for that here.  Bulbs and tiny succulents ordered by mail, and cuttings from my own garden, have been most of what I've had to work with.  That means that material for my blog posts is limited, requiring me to pay closer attention to little developments I might've ignored in the past.  This week, I focused on emerging bulb foliage, buds, and seedlings, the prelude of the burst of color that comes in late winter/early spring here.

I'll end with a photo of a very small bulb flower that made an appearance at the edge of my south side garden.

That's it from me this week.  I spent several hours between rainstorms yesterday working on my street-side succulent garden.  It's raining again here (yay!) so I'll get photos of that area to share next week.  In the meantime, enjoy your weekend!

We've been riding a weather roller-coaster of late so I've been taking plenty of wide shot photos of the Los Angeles harbor area visible from our back garden to capture the shifts.  For today's Wednesday Vignette, I'm sharing shots taken over five different days during the latter part of January.


We're expecting more rain tomorrow night into Friday.  Warnings about possible mudslides are already being sounded.  Hopefully, we'll have none of that here, just lovely rain to fill my remaining collection tank.

For more Wednesday Vignettes, visit Anna at The Creative Flux.

In a Vase on Monday: More than I expected!

When I stepped into the garden on Sunday morning, I really had no idea what I could put in a vase this week that I hadn't already used recently.  I made an entire circuit of my garden ruling out possibilities until I saw the white snapdragons in my cutting garden.  They'd been beaten down by rain on Saturday (one-third of an inch) and their stems were lying on their sides as if to say "save me" so I cut them.  That started me on a roll collecting bits of this and that in white and blue.

As I was assembling my varied collection for that vase, I suddenly remembered that I'd seen buds on a bearded Iris by my shade house the week before.  I'd planted all blue and white varieties in that area - or so I'd thought.  The Iris in question was indeed blooming but it wasn't blue or white.  I cut it anyway and then did another round of the garden looking for suitable companions for it.  I checked my records, which showed no Iris in a mauve and burgundy color, leading me to conclude that the rhizome I planted had been mislabeled.

Buds are forming throughout my garden.  I could swear that the Freesias next to my backyard fountain covered themselves in buds in response to Saturday's rain.  More rain is expected this week and I hope I'll be tripping over new blooms in the weeks to come.  Spring does come early in coastal Southern California!

Another renovation of the garage front succulent bed

I seem to renovate the succulent bed in front of the garage all too often.  When we moved in 10 years ago, the area had a well-established clump of Agave attenuata, a lovely Arbutus 'Marina', grass and weeds.

We removed the lawn early on and I planted a host of other succulents, mostly small specimens.  I've tweaked and renovated the area before but it has never really pleased me.  Although I supplemented and raised the soil level, it's still not the best medium to grow succulents, or anything else.  It's also a very dry area, even though it receives some irrigation but I've probably been less attentive to my new plants there than I should've been.

I tackled the three things that bothered me most last week.  They were the Furcraea foetida 'Mediopicta' I'd selected in 2019 to provide a focal point and two Crassulas I'd used extensively as fillers.

These are all nice plants - in other settings.  I grew a variegated Furcraea in a partially shaded area of my back garden years ago and it did well until I decided it was clearly too large for its spot and had to move.  It didn't take the move well and quickly died.  I think the spot in the garage front succulent bed was both too sunny and too dry for this one.  The same probably could be said for Crassula lycopodioides.  The Crassula tetragona (aka pine tree succulent) simply got too tall and lanky and ended up looking out of proportion with the surrounding plants.

I potted a Furcraea offset, which may or may not survive.  I pulled out all of the Crassula lycopodioides and I took a mass of cuttings of the Crassula tetragona, which I've yet to decide what to do with.  On my first pass, I filled in some of the vacancies with a potted plant and cuttings from elsewhere in the garden.

I had a stockpile of plants in pots and tiny plants obtained by mail order to add to the area but I had a hard time deciding how to proceed.  I finally realized that I needed to pull the under-performing Aeonium haworthii 'Kiwi' ('Kiwi Verde's' flashier cousin), which I'd used throughout the bed as another filler.  I've previously described this plant as my "gateway" succulent.  It was the first succulent I ever grew and it was one of the few plants I brought with me from my former garden.  Aeonium 'Kiwi' and Aeonium arborescens are my go-to plants to fill bare spots.  I've used 'Kiwi' extensively to line the edge of beds and, up to this point, I've always been pleased with it.

Well, 'Kiwi' didn't come through for me in this spot on the north west side of the house so I yanked the bulk of it.

With that change, I felt free to move other plants within this bed and transplant other things I had in the wings in pots and elsewhere in the garden.

With rain in the forecast, I also decided to get my tiny new mail-order purchases planted and even sow some seeds.

I still have loads of cuttings but I'll wait out the three rainstorms reportedly in the offing before I make decisions about which, if any, should be planted in this area.  Worst case, I'll offer another succulent cutting giveaway to neighbors.

Here are the photos of the bed in its current state I forgot to include when I published the post last night: 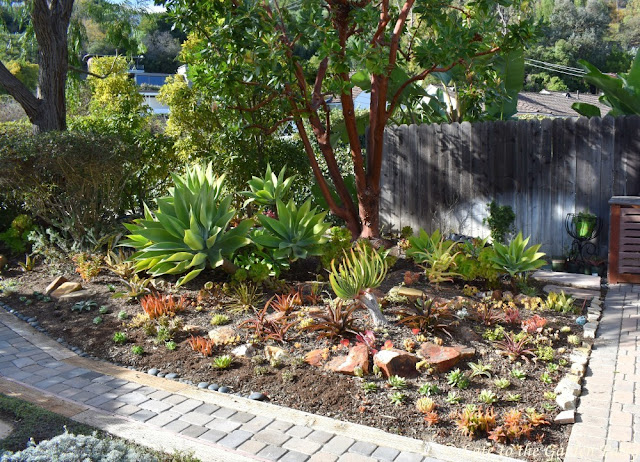 Best wishes for a pleasant weekend.

I spent most of the day working in my garden on Monday, starting in late morning and continuing past sundown, with just an hour break for lunch.  It felt a little like boot camp at times and most of what I accomplished doesn't translate into photographs, pretty or otherwise.  I started with two solid hours on my back slope just cutting back dead growth and watering, wearing boots to stave off any of the fire ants that might still be down there somewhere.  I ended the day literally crawling on my hands and knees beneath my Echium 'Star of Madiera' to cut back several clumps of ornamental grass.  In between, I tackled moving a mid-sized Agave gypsophila located way too close to a path I use regularly.

I decided the Agave would be much happier in the long run on the moderate front slope I cleared and replanted in November.  Moving it there necessitated a small game of musical chairs.
I was a little nervous about damaging the Agave either in the process of digging it up or transplanting it on the top level of the front slope.  The latter required a degree of dexterity, difficult to manage given that my right knee isn't entirely reliable on level ground much less a slope.  A couple of times I reminded myself that now would not be the time to fall and crack my head as getting into an emergency room presents a serious problem in Los Angeles County at the moment.  However, I worked slowly and carefully and neither the Agave nor I were injured.

I'm glad I spent Monday gardening as high winds from noon on yesterday prevented me from doing much more outside than battening down what the wind sent flying.  We got a tiny bit of rain (0.02/inch) after nightfall, which barely dampened the pavement while liberally spattering the windows.  Wind gusts, some exceeding 40mph, continued overnight and it's still windy today.  Still, we were far luckier than some areas that saw toppled trees, widespread power outages, and, yes, more wildfires.
I'm hoping conditions later today will allow me to spend some time working on the front garden succulent bed.  I've been slowly working on renovating it, transferring plants from pots and other parts of the garden and generally moving things about.  I also purchased a "few" new plants by mail order that I'd like to get in the ground.

For those of you in the US, happy Inauguration Day!  May the next four years be far better than the last four!

In a Vase on Monday: A few new blooms

I didn't discover many new flowers during my Bloom Day scavenger hunt but, after a few days of unseasonably warm-hot weather, more flowers made an appearance.  Friday's temperature hit 88F (31C) and Saturday and Sunday were only nominally cooler.  The forecast calls for steadily cooler conditions as the week progresses and there's even a chance of rain next week.  While I remain hopeful, I'm not going to get too invested in the possibility of rain yet as that prospect already appears to be drifting away.

The second arrangement has two floral elements that didn't appear in my Bloom Day post.

To be truthful, I'm not enamored with either of this week's arrangements but finding new blooms in the garden cheered me up considerably nonetheless.  Fingers are crossed that this week goes well for our nation. 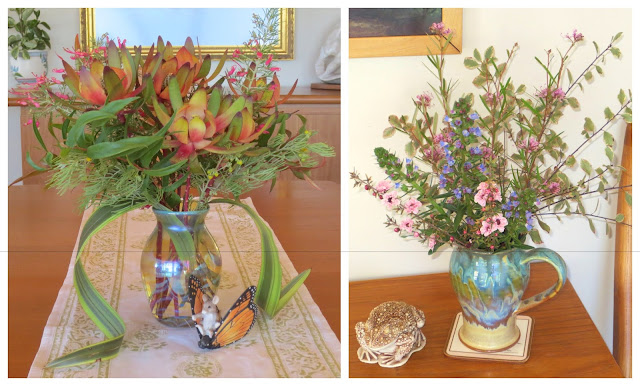