In a Vase on Monday: Welcoming the new year!

I've got just one vase to offer this week.  The holidays have been busy and floral material is also in short supply.  My Grevilleas are still the main source of flowers so it's no surprise that another of these set the color scheme for this week's arrangement.


It's been cold and, of late, exceptionally dry here and, after running our heater virtually non-stop most of the month, our Christmas tree dried out in record time so I stripped the interior of the house of its Christmas decorations this past weekend, leaving a lone snow globe sitting in the front entry as a nod to the winter season.

The new arrangement occupies the usual place of honor on the dining room table. 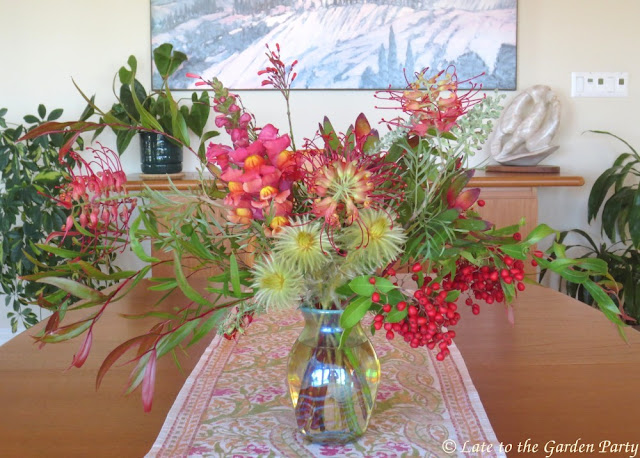 For more IAVOM posts, visit Cathy at Rambling in the Garden.  Best wishes for a beautiful, floriferous new year!

While not entirely absent, floral color is subdued this time of year, even in my part of the world.  It's foliage that makes a statement.  I did a circuit of the garden to scope out what needs to be cut back (a lot!) and took some photos in the process.

Tomorrow, December 29th, is my 6-year blogging anniversary.  I'm not planning a special post to recognize the occasion but I do want to take the opportunity to thank those of you who read my blog and those who comment, if only periodically.  You invited me into a world of garden enthusiasts I hardly knew existed and made me feel a part of it, for which I'm more grateful than I can put into words.  Thank you!

Christmas Day at our house was blessedly low key.  And the day even began with a little light rain.  Totaling 0.04/inch it certainly wasn't a drought-buster but we've come to appreciate whatever we get.  It left behind the clearest sky we've had since our last real storm in early December.

I took time to take photos of my currently subdued garden, finding a few surprises in the process.


I had smorgasbord leftovers for lunch and spent much of the afternoon breathing clean air while pruning out-of-control shrubs before my husband and I sat down to a Cornish game hen and roasted vegetables for dinner, then watched a movie based on an Agatha Christie novel.  A perfect day!  I hope yours was as pleasant.

In a Vase on Monday: Merry Christmas!

Each year before Christmas, my husband and I host an annual smorgasbord, a tradition I took over from my mother years ago.  The food selections have become less traditional over time - even my mother never served lutefisk and I've abandoned the stewed prune dessert she insisted on serving.  (Warning: the lutefisk video may not be suitable for all audiences.)  My husband, who isn't Scandinavian, made Swedish meatballs.  Other than salads, I picked up everything else from a local deli and bakery.

Our family is smaller than it once was but now includes friends who feel like family.  As our current home is a slog for most of our guests, we held this year's celebration on Saturday so everyone could avoid long commutes and the worst of the holiday freeway traffic.  I prepared floral decorations for the dining area on Friday evening, although as the light was terrible, my photos were taken on Sunday.


I reused the stems of Westringia 'Morning Light' (aka Australian rosemary) I cut last week in my second arrangement, along with a stem from the poinsettia I bought a few weeks ago.

For more IAVOM arrangements, visit Cathy at Rambling in the Garden.

Best wishes for a Merry Christmas to those of you who are celebrating!

As views of the Los Angeles harbor are valued here, good neighborly relations dictate annual tree trimming.  I don't have all our trees trimmed each year but we tackle at least half of them annually.  While we've done some of the trimming ourselves, especially in our early days in residence, I now hire all or most of the job out.  I trust the crew we use each year but I still dread the collateral damage that routinely accompanies the process.  This year, two specific areas were also of particular concern.

If you read my blog regularly, you may know that our mimosa tree (Albizia julibrissin) has posed challenges.  It's a messy tree to start with, dropping litter in the form of flowers, leaves and seedpods almost continuously.  It's bare of leaves for at least 4 months of the year and, in 2018, it didn't leaf out at all until late June.  Of even greater concern, half the tree never leafed out at all.


I consulted an arborist in October and made the hard decision to remove three major limbs on the front side of the multi-trunked tree.  I was afraid the tree would look freakish after major surgery like that but I'm not ready to cut the whole tree down quite yet.  As it turned out, the tree doesn't look too bad when viewed from the front, although I can't say it looks entirely normal either.

The other big change was made on the south side of the house, where I elected to take out one of the two tree-sized Toyon (Heteromeles arbutifolia) and thin out the second.  Both sat along our property line at the top of a sharp slope.  We also cut down an extremely tall leader on an adjacent shrub (Auranticarpa rhombifolium).  My main concern in this case was to avoid any damage on our next door neighbor's side but, happily, that didn't prove to be a problem.

The rest of the tree trimming was relatively straightforward.

Other than a laurel hedge, that's everything that was touched in this round of trimming.  I've spent a couple of hours every day this week cleaning up the affected areas.  The crew does a good job at picking up the debris but they never get everything.  Wind also shakes down branches that were cut during trimming but didn't immediately fall to the ground.  Pots and garden furniture moved out of the way has to be put back.  A lot of mulch gets picked up during the tree trimmers' clean-up too so I spent time replenishing that.  (Next year I'll remember to hold off on mulching until after this annual exercise.)  And of course some plants below the trees, particularly those sitting atop slopes, get squashed and must be either removed, replaced or cut back to allow them a chance to recover.  I'm mostly done...

It'll be a busy weekend for me as Christmas is just around the corner and we're hosting family and friends on Saturday.  However you're spending the weekend, I hope it's a good one.

Alison of Bonney Lassie recently encouraged fellow garden bloggers to let go of the pretty faces we tend to present to the world and share some of the uglier sides of our gardens.  Last week, I shared photos of my sad (and largely hidden) back slope.  This week, I have a collection of ugly little vignettes.  Two of these hit me in the face this weekend after the tree service finished its annual trimming exercise.


The next vignette is the area behind our garage.  Many gardeners have dump zones for empty pots and the like and I'm no exception.

Two other sad sights sit at each end of the garage.


Finally, here's the stump on the south side of my garden near the property line.  I tried to prettify it earlier by planting its open center but I've been thwarted by visiting raccoons.

My new year's garden resolutions will include addressing each of these issues.  Stay tuned!

Do you have some ugly truths to share?  This meme is gaining traction with other bloggers and I encourage you to jump on the bandwagon - coming clean is good for the soul!

In a Vase On Monday: Purples and Pinks

This week's vases aren't particularly Christmas-y but I'm holding back the flowers in more seasonal colors for an upcoming holiday celebration.  Once again, I walked into my garden thinking I didn't have much that would be useful to create an arrangement only to be surprised at just what I found.

The jumping off point for my first, purple-themed vase was an unusual Abelia I recently rediscovered on my back slope.  I planted it in 2012 but I've got no photographic record of its blooms in any year since.


The blooms of my pink Camellia sasanquas are still plentiful but they're showing signs of wear so I decided to cut a few stems for a second vase while I still could.


The orchid and Leucadendron arrangement I created 2 weeks ago is still in good shape and currently sitting on a side table in the living room.


For more IAVOM arrangements, visit our host, Cathy at Rambling in the Garden.  Best wishes to all this holiday season!