I'm joining Chloris of The Blooming Garden with a top 10 list of January blooms.  There's admittedly overlap with my Bloom Day report but in this case I've whittled down what's blooming in my garden to my current favorites.  As it was hard enough to pare down the list to 10 plants, I'm not going to even try to prioritize my choices so here they are in alphabetical order:

Early this morning before the moon set, my husband and I got up to view the Super Blue Blood Moon.  The lunar eclipse that accompanied the supermoon began at 4:51am PST.  We were concerned that our view might be spoiled by the hills to the west of us as the moon dipped lower in the sky.  Added to that complication is the fact that, when it comes to taking nighttime photos, I've no idea of what I'm doing.  However, I did get one half-way decent photo at 5:22am before the moon disappeared from our viewing spot in the front driveway.

And, since I was up, here's a bonus sunrise shot from the backyard garden: 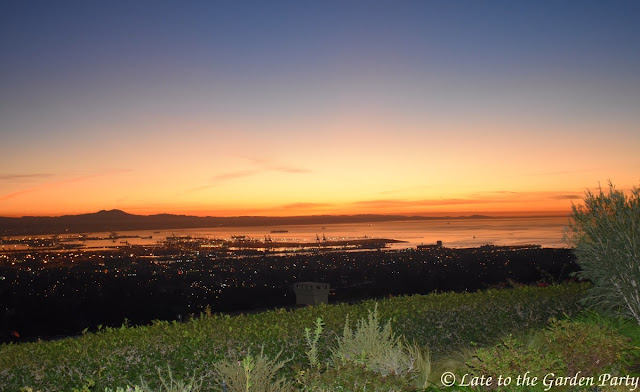 In a Vase on Monday: That summer feeling

Many of my recent In a Vase on Monday posts have led commentators to remark that my flowers conjure images of summer.  Well, this week it feels like summer here.  Our temperatures have veered into the 80sF, some 20 degrees above what's "normal" for this time of year here - we're expecting a high around 85F (29C) today - and it's as dry as dust, with red flag (fire) warnings once again in effect.  So, if you see summer when you look at my vases, I won't argue with you.


Once again, my second vase features colors at the other end of the spectrum.


Much as I'd like to see cooler weather and rain, it's probably a good thing that it's warm and dry.  My husband has a project going, one that involved drilling a hole through the wall at the front of the house.

There may be some rain coming in mid-February.  Hopefully, the project will be done by then.

Visit Cathy at Rambling in the Garden to see what other IaVoM contributors have got in their vases this week.

I had our trees trimmed this week.  Not all of them but 9 of the largest specimens plus 5 shrubs that make up what's supposed to be a hedge along the property line on the southwest side.  As the tree-hating neighbor that formerly made a fuss about perceived obstructions to her view moved last year, I'd considered leaving all the trees alone this year but my husband invoked the good neighbor card so I scheduled it.  I asked the arborist to go lighter in thinning the trees this year and overall I'm pleased with the results.

Work started in the back garden.


The big ticket item in the back wasn't so much a trim but rather tree surgery.  Three large limbs of the mimosa tree (Albizia julibrissin) were removed.  Since I scheduled the tree surgery back in November, the tree sprouted new foliage here and there, months prior to its usual schedule.   This week, when the arborist and his crew showed up, I asked if the growth signified the tree's decline or if it was simply a response to the yo-yo weather conditions we've had this winter.  While the arborist couldn't answer that definitively, he said he's been seeing trees behave oddly all over this year.  He did a quick check for signs of the shot hole borer, an insect that's currently causing a lot of problems in Southern California, but he didn't see any signs of that.  I gave the okay to go ahead with the surgery. 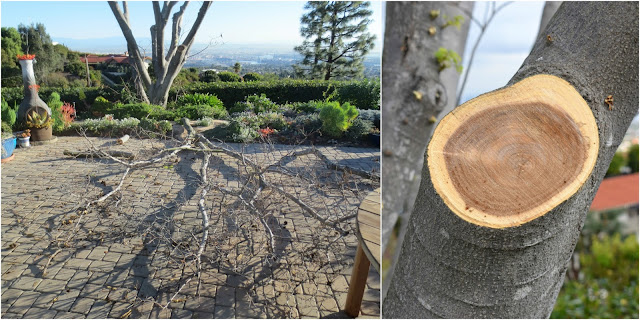 The rest of the trimming, all in the front garden, was relatively straightforward.

Of course, there was collateral damage.  There always is, no matter how well I think I've cleared the areas around the trees to be trimmed or how careful the crew tries to be.  I was most concerned about any damage to the lath (shade) house my husband built but thankfully that was untouched.  A recently planted Lotus berthelotti disappeared, presumably swept up with debris dropped from the peppermint willow in the back.  A number of succulents were up-ended and knocked about but, with a 7-person crew, that was to be expected.  The area around the strawberry tree in the front garden, which sits atop a moderate slope, suffered the most damage.  Frankly, I'd completely forgotten that this tree was on the list until I checked it 2 days before the work was scheduled.  Most of what was lost were plants that are easily replaced with cuttings, Aeonium arboreum, Euphorbia tirucalli, and Senecio vitalis.  An Agave desmettiana was crushed.

My biggest mistake was installing some new plants on the slope.  My heart ached when I saw what'd happened to the Crassula falcata I picked up at the local botanic garden last week.

I'm still picking up debris but that's normal fall-out of the tree trimming process.  Wind will shake out bits and pieces of foliage for weeks yet.  Another round of Santa Ana winds is on the way, which may expedite that process.  The good news is that I can now work on stage 2 of my planting plan for the area surrounding the lath house.  It doesn't appear we'll be getting any rain interruptions.


I hope this weekend brings you sunny skies.  If Mother Nature shows up with rain, please redirect her to Southern California (with a caution to be gentle with the burn areas).

Isn't it always the case that, as soon as you post your photos for Garden Blogger's Bloom Day, a wonderful something or other pops into bloom?  For today's Wednesday Vignette, I have photos of 2 plants that deserve their moment of glory.

In a Vase on Monday: Caught between seasons

Is it winter or spring in Southern California?  The calendar says it's winter but it's feeling more and more like spring.  Unlike gardeners in many other parts of the Northern Hemisphere, we don't like to rush winter here.  Winter is our rainy season, or that's supposed to be the case anyway.  Now I'm not wishing for heavy rain - the folks in the burn areas don't need any downpours.  But some nice, gentle rain parsed over a period of days would be very, very good.  We had a chance of such rain last week but we got nothing.

At least the haze over the Los Angeles Harbor cleared, giving us a better view.

My vases for IAVOM this week are as schizophrenic as the weather.  Winter blooms dominate my first vase.


In contrast, my second vase screams spring, even to my eyes.


There's another slim chance of rain later this week but, as the odds are even lower than they were last week, I'm not counting on it.  The good news is that Northern California is getting somewhat more rain than we are down south but, without a February or March miracle, the rainy season here is looking like a major bust, with rain totals prospectively even lower than they were at the height of the drought in 2015.

For more vases, visit our host, Cathy at Rambling in the Garden.

Curious to determine the status of the new rose garden at South Coast Botanic Garden and finding nothing on the garden's webpage or in its weekly newsletters, I decided to drop by and check things out for myself.  The garden is about 5 miles from my home and factors into my commute at least a couple of times each week so it wasn't hard to fit a visit into my schedule.

The rose garden's been under construction since last June at least and was originally targeted for completion in the fall.  The last time I dropped by in late December, it looked as though it was nearly finished but, as it turns out, it's still a work in progress.

With the visit to the rose garden a bust, I took a wider look around.  I didn't bother to check the lake, which has been drained for some time now, but there were pretty flowers here and there. 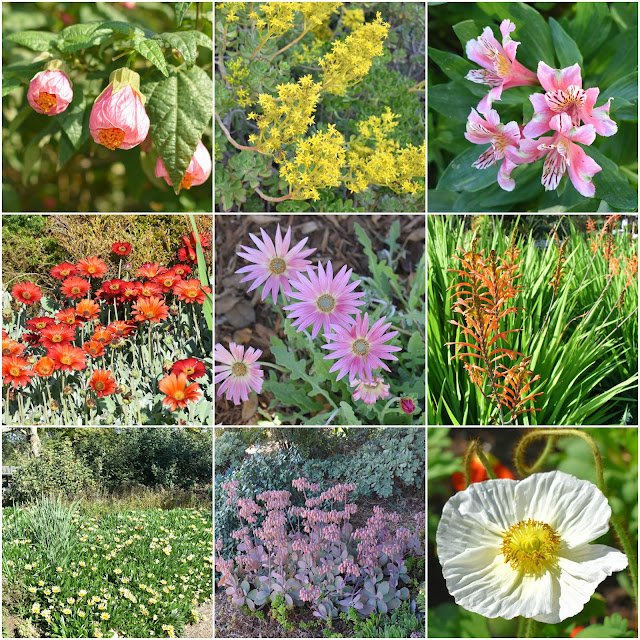 However, the desert garden stood out as the most impressive at the moment. 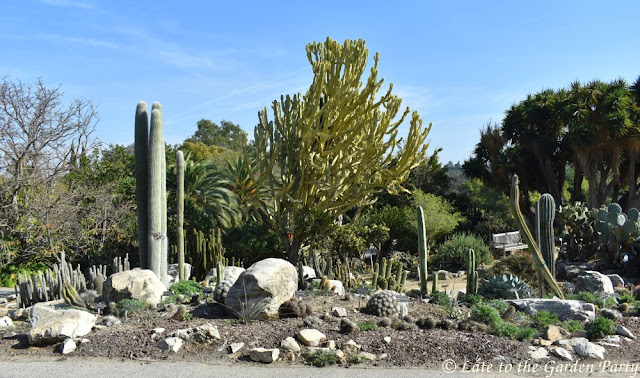 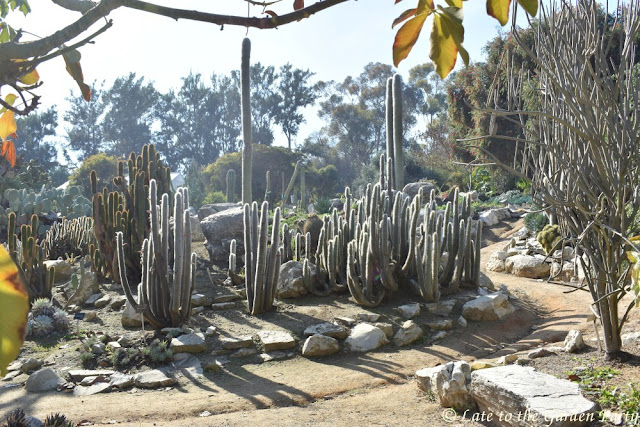 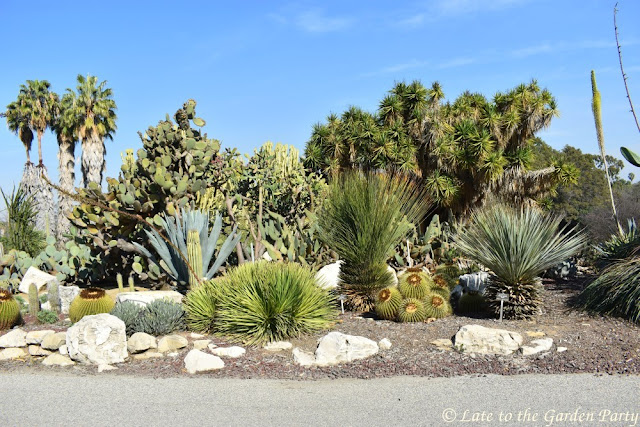 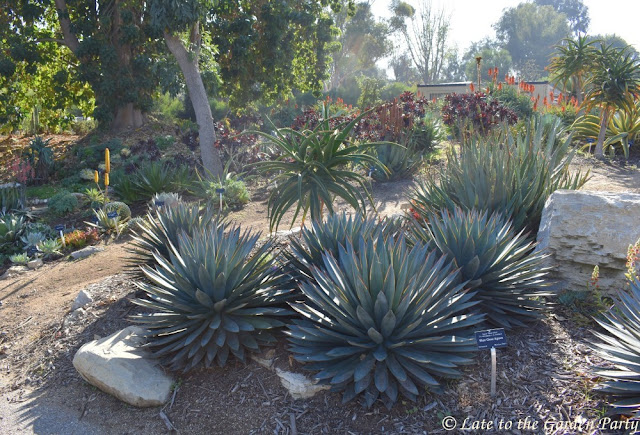 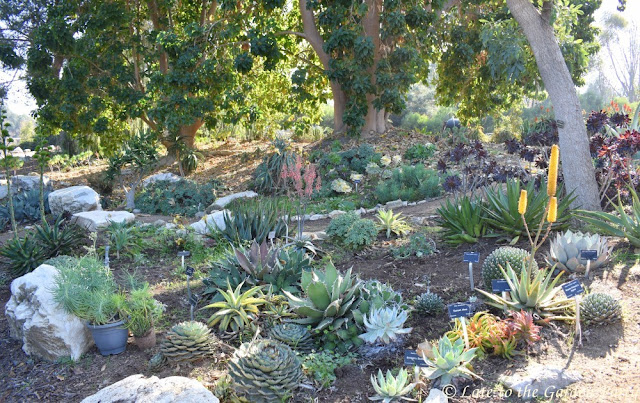 While my visit was relatively brief, I didn't leave without checking out the nursery area surrounding the gift shop.  And, as the plants are always a deal, especially with my member discount, I didn't go home empty-handed.

Three new plants isn't a bad way to get the weekend off to a good start.  I hope you find some treasures to take home this weekend too.