In a Vase on Monday: Springing toward summer

I'm already looking at my cutting garden with an eye toward what I can remove to make room for summer bloomers.  I've cleared out some of the Ranunculus and I think the peach foxgloves and the Calendula will be the next to go as both were badly burned by the brief heatwave we experienced in early April.  However, despite their ugly foliage, the foxgloves and Calendula have continued to produce bloom spikes so I cut several of each as the starting point for this week's first vase.


The bearded Iris on the back of the slope I'd hoped to use last week bloomed last Monday afternoon.

Fortunately, our weather turned a bit cooler again last week (upper 60s to low-70sF) so there were still viable blooms available to cut this week.


Visit Cathy at Rambling in the Garden to find more "In a Vase on Monday" posts. 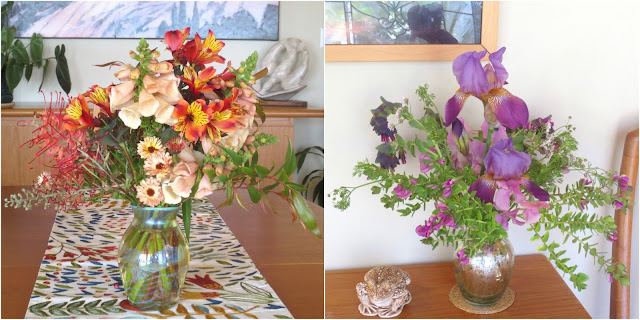 Last week I published photos showing the removal of a large Grevillea in the dry garden area on the northeast side of our property.  At that time, I commented on the domino theory and how one change can precipitate another.  Well, further changes were made this week.  The sad little non-blooming cherry tree came out and so did one of my two guava trees.  The latter change made the biggest difference in the area.


I made the changes (with my husband's able assistance) despite the fact that I haven't yet decided what will go into the empty spaces.  I don't plan to put anything large into the space formerly occupied by the guava tree.  I want to give the 2 Leptospermums in that area a chance to fill out and I expect I'll just add ground cover plants beneath them, or possibly fill in with more Centranthus ruber, which is a virtual weed here.  Leptospermum scoparium 'Pink Pearl' is one of my favorite plants and it deserves an opportunity to shine.

While I'm talking about favorite plants, I thought I'd join Chloris at The Blooming Garden and share my top 10 favorite bloomers for the month of April.  As I've got a flower fixation and as April is possibly the most floriferous month here, restricting myself to 9 other favorites wasn't easy but here we go:

One plant that didn't make the cut this month is Festuca californica, a native California grass that's currently blooming.

The grass adds an airy feeling to the garden and, rather than plant a tree in the area formerly occupied by the Grevillea and the cherry tree, I'm considering adding a mass planting of this grass and perhaps another large agave in that area rather than a tree.  My husband has made it clear that he really wants a tree to screen his view of the newly renovated house up the hill from us and I don't want to place two trees in such close proximity.

Enjoy your weekend and do check in with Chloris at The Blooming Garden to see what blooms gained her approval and that of other participating gardeners this month.

I was wandering the back garden with my camera on Saturday sometime near noon.  I saw a wire cloche I'd left sitting along the flagstone path after removing it from a plant I'd been trying to protect from my bunny visitors.  As I went to pick it up, I immediately noted something odd stuck in the wire framework. 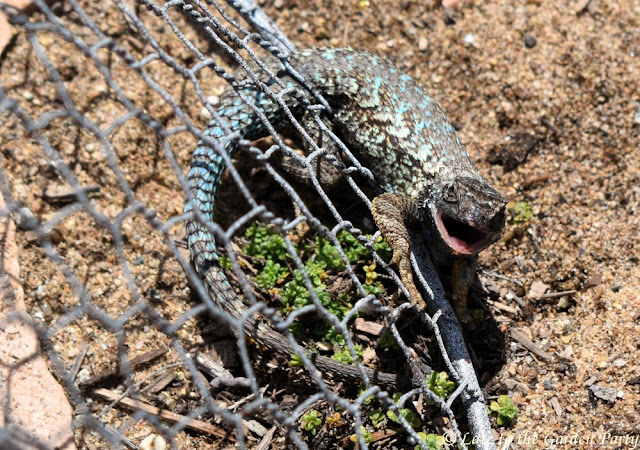 The lizard's head was down when I first saw him.  My first reaction was a sense of wonder that he'd turned a metallic bluish color, blending in with the color of the wire.  I've seen the western fence lizards that populate my garden turn from striped brown to almost black but never blue.  Then I saw he was seriously stuck.  I jiggled the cloche a bit to see if I could help him get loose.  He didn't budge and that's when he looked up at me, his mouth open with an expression I interpreted as extreme distress.  Whether he was crying for help or expressing abject terror that this human looming above him was going to finish him off, I don't know.  I ran and got my garden snips and, as gently and carefully as I could, I snipped the wire clamped around his hind legs.  He was still unable to move so I clipped a little more.  Then he was away like a flash without a backward glance.

This is my Wednesday Vignette.  For more, visit Anna at Flutter & Hum.

In a Vase on Monday: Ensemble Casts

I had ideas for 2 vases this week, each with a specific flower assuming a starring role.  However, as is often the case (at least in my universe), my vision didn't materialize as planned.  The first arrangement was constructed with Pelargonium 'Oldbury Duet' in mind as the centerpiece.

As pretty as 'Oldbury Duet' is, it was quickly put in its place by the blooms I selected to accompany it, creating a mix that can more accurately be described as an ensemble cast.

The second arrangement was intended to feature the tall bearded Iris on the back slope.  The back slope is invisible to all but the most intrepid visitors and even my husband and I only visit the space a couple of times a week on average.

As the 2 taller Iris stems failed to bloom on my schedule, I ended up with another ensemble case.

With the exception of the arrangement in the clasped hands vase, last week's arrangements were relegated to the compost bin.  Before I tossed the one containing the white Delphinium, though, I snapped a photo showing how that pristine white flower evolved during the course of the week.

For more "In a Vase on Monday" posts, visit our host, Cathy at Rambling in the Garden.

One of the two Grevillea lavandulacea 'Penola' in the dry garden area on the northeast side of our property has been looking unhealthy for some time now.  I first noticed dying branch tips on the formerly robust shrub last spring.  I pruned off the sections that looked bad and waited to see if it'd recover.  While it produced some new green foliage and it bloomed on schedule, it looked worse overall this spring.

I enlisted my husband's help in taking out the afflicted Grevillea this week.

So now what do I do with this area?  The status of that cherry tree alongside the stairs to the back slope is still in question.  Inherited from a prior owner, it amazed me by producing a handful of cherries for several years in a row, despite the fact that getting the recommended 800-900 hours of winter chill is a virtual impossibility here.  However, I don't recall seeing any fruit last year and thus far this year it hasn't produced leaves, much less flowers.

If  we pull out the cherry tree, I might try another tree in that location.  A crape myrtle maybe.  Whatever I select, it can't be too tall as I don't want to risk the ire of my next door neighbor, whose spa sits on the other side of the fence.  I still haven't planted the Arctostaphylos 'Louis Edmunds' I picked up at a discount at my local botanic garden a couple of weeks ago either, so that's another possibility.

Meanwhile, other parts of this garden area also demand further consideration.  I never designed this part of the garden so much as just plunked plants there.  My husband said he'd like to add a tree to block the view of (and from) a house up the hill that's currently in the latter stages of construction.


There was an apricot tree in the general location of that Cleveland sage when we moved in but it died soon afterward.  If I put a tree in the Grevillea's former spot, that'd probably be too close anyway.  As the spot gets a considerable amount of shade from a mature Arbutus 'Marina' nearby, maybe another New Zealand tea tree (Leptospermum scoparium) would be a better choice to address my husband's request.

That question had me considering the placement of the 2 Leptospermum I currently have in this area.  The 2 shrubs sit beside an inherited guava tree.  I don't hate the guava but it's not something I would've planted either and it doesn't look at all great next to the Leptospermum.  Maybe the guava needs to come out.

There's another guava tree on the other side of the gravel path running through the area.  Guavas are self-fruitful so it doesn't require a second tree to produce fruit but fruit production is said to be heavier when there are others in the same species nearby to promote pollination.  However, no one here eats guavas except the squirrels and I wouldn't be distressed if they had fewer fruits to bury in my garden borders.

And then there's the problem of what to do about the Cordyline 'Renegade' I planted last fall.  They looked great - until our temperature unexpectedly soared into the 90s a couple of weeks ago.  What happened to them doesn't bode well for their fate this summer.

A friend recently told me that, when remodeling a home, the domino theory comes into play, with one change precipitating another.  It looks as though the same can be said for gardens.

Any and all suggestions will be gratefully considered!  In the meantime, I'll leave you with a pretty picture of one of the Matilija poppies now blooming on the back slope.  Enjoy your weekend!