On the last Friday of the month, Loree of danger garden celebrates her current favorite plants and encourages other gardeners to follow suit.  April is usually a high point in my garden but the lack of rain this season (after unrealistically inflated hopes of ample rain associated with El Niño), early heatwaves, days of freakishly ferocious wind, and a neighbor's threat to contact the city about the height of my trees have had me viewing my garden through jaundiced eyes.  I had to force myself to blink to see the beauty in my garden.  Fortunately, the exercise of looking at plants individually helped me shake off my doldrums and see what's good about my garden right now.  I offer just a few examples.

Globularia x indubia (aka globe Daisy), which I personally refer to as my hairy blue eyeball plant, is in full bloom.  I added it to my dry garden in October 2012 and it is finally bulking up in size.  A second plant, added last July, survived last year's hot summer and this season's limited rain but it's still small.

In the front garden, two Leptospermum 'Copper Glow', planted a month apart in the fall of 2014, are reaching maturity.  I was afraid they might get too big for their spots but so far I think they're fitting in nicely.  The shrubs are supposed to produce white blooms but have yet to do so.


In the backyard, it's impossible to ignore Achillea 'Moonshine'.  Despite cutting numerous stems for vases, the flowers continue to dominate the backyard border.  The first of these perennials were planted in 2012 but I added a few more in 2015 after removing the remainder of our lawn.

Acacia cognata 'Cousin Itt' has a more low-key presence in the backyard border but it never ceases to amaze visitors.  Three of these shrubs, planted in part-day shade below a tall peppermint willow (Agonis flexuosa) in the fall of 2012, have created a sea of fluffy green foliage despite dry soil and competition from tree roots.

To conclude, I'd like to shine a spotlight on Leucadendron 'Pisa'.  This silver-foliaged beauty has surprised me this year.  Planted in 2014, it produced a mass of "blooms" in March.  Since then, it's developed lovely silver-tinged cones.


If you've got some plants deserving of special mention this month, jump onto Loree's bandwagon at danger garden.

Fall and winter is absolutely the best time to plant here in coastal Southern California.  It's cooler and we get rain - not a lot of rain the last few years but some.  Frost is virtually unheard of so that's not a danger to infant plants.  The only problem is that many of the plants on one's wish list are unavailable.  Nurseries and garden centers find it easier to sell plants when they're in bloom or about to bloom so their fall/winter stock is limited.  Many also clear the shelves to make room for Christmas trees and decorations.  Mail order nurseries, many of which operate out of colder climes, either close down entirely or carry limited inventory.  So, like it or not, plant shopping continues well into spring and often beyond.  Early spring usually isn't too bad a time to plant as cooler temperatures persist even as rainfall dries up but our traditional "cool season" has been distinctly less cool the last few years.  This year, February was downright hot and we didn't get a drop of rain in what is normally our wettest month.  March was better but April has been a mixed bag, offering just a touch of rain, significant heat, and frequent, plant desiccating winds.

Despite the downsides of planting under such conditions, I did quite a bit of plant shopping in late March and April.  After taking out the remainder of our lawn last year, I still had a lot of empty ground to cover come spring.

The first big plant shopping expedition in late March with a friend took me north into the counties of Ventura and Santa Barbara.  I left without my camera so I've no photos of the three nurseries we visited that day but I'm focused here on my purchases, not the nursery grounds.

First up was Seaside Gardens in Carpenteria.

My most exciting purchase was Phylica pubescens.  I first saw this plant in 2013, offered in a large pot for $400.  This trip I found it in a 1-gallon pot at a reasonable price and snatched it up.

Pacing myself, I bought just 3 other plants at Seaside.

After lunch, our next stop was Terra Sol in Santa Barbara, where I picked up a few more things.


On our return trip south, we stopped at the Australian Native Plants Nursery in Casitas Springs.

I was hunting for a green-flowered Callistemon and I found one - maybe.  Callistemon pinifolius may bloom green, or red.  Although my plant was germinated from seed taken from a green-flowered parent, Jo, the nursery owner, explained that the flower color is a crap shoot.  I deliberated at length but, as I only get up that way twice a year at best, I brought the plant home.  For now, it remains in its nursery pot until it shows its true color.

Just a few days after my northern nursery expedition I received a delivery of plants from Annie's Annuals & Perennials.

Three days after that delivery, I received an order of 36 Eustoma grandiflora (Lisianthus) plugs I'd placed with Burpee back in December.  April was the earliest delivery date I could get.


Although April's heatwave and wicked winds took a toll on my plant plugs, I'm looking forward to seeing Eustoma blooms in my garden within the next month or two.  A number of last year's plants are poised to make a comeback.  It remains to be seen how the Burpee plugs will do as the heat ramps up but I remain hopeful.

I barely got all these plants (minus the Callistemon) in the ground before I trotted off to the South Coast Botanic Garden's spring plant sale.

My big find at the sale was a Salvia africana lutea.

But I also brought a few other things home.

I was back at the botanic garden the following week for the Cactus & Succulent Society's Show & Sale but I'll cover that event in a future post.  I'll end here with the plants I brought home from my most recent trip to Roger's Gardens 2 weeks ago.

Other than the Callistemon and the Maireana sediflora, which I keep moving about in its nursery pot, everything is planted.  I really should stop the plant buying now but I'm not foolish enough to make any promises.  What about you?  Have you been on any plant shopping binges this spring?

In a Vase on Monday: Too much yellow?

Last week, I reported on an effort to adjust an excess of yellow color in my back garden.  It certainly seems that everything is coming up yellow right now, vases included.


My original plan was to use purple Solanum xanti as my focal point and yellow touches as accents but, while the Solanum is flowering well, it can't match the yellow flowers in abundance, as a look at my garden demonstrates.

Without enough purple color to temper the screaming yellow, I looked for bright green foliage in an effort to achieve balance.  The grapevine planted along the fence with my neighbor to the north is also scrambling over everything in sight at the moment, so I took the clippers to it.

Here are close-ups of what went into the vase:

The yellow color is still dominant but the curves of the grapevine give the vase a graceful quality, rather like a woman wearing a flashy designer evening gown.

For the bedroom mantle, I sought out softer colors, stealing a little Dorycnium hirsutum (aka Hairy Canary Clover) from the bees as my starting point.  The clover's foliage feels like cashmere to the touch. 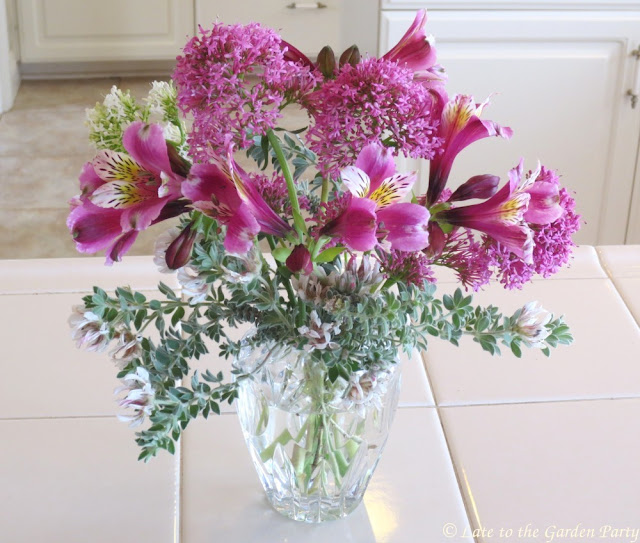 I had floral and foliage leftovers from one of last week's vases and plants cut during my sojourn through the garden so I popped these into a third vase.

Visit Cathy at Rambling in the Garden to see more flower and foliage arrangements.

Today marks the 46th celebration of Earth Day.  In recognition, I thought I'd take you on a short stroll through my garden, the place where I feel closest to the earth and its needs.

I hope you've had time to enjoy Earth Day in your own way.  Listening to the news, it's hard not to worry about the earth's future but at least one report offers a positive slant today.

Yellow is my favorite color but I've gone way overboard in its use in my backyard garden.  While I have several swaths of yellow color, the one that seems most jarring to my eye is that created by a mass of Gazania 'New Day Yellow'.  Despite the pathetically low rainfall we've had this season, limitations on irrigation, and bursts of unusually hot temperatures in what is supposed to be our cool season, these plants are very happy in my garden.  The clumps are large and continuously covered in bright gold flowers.

I decided I needed to tone things down a bit in this area so I went shopping for Gazanias in a softer color last weekend.  It's already getting late to plant anything new here - the month of February was the hottest (and among the driest) on record and we're in the midst of another heatwave now.  If I'm going to plant anything more, I thought I'd best get it done this month.

My shopping trip took me to Roger's Gardens in Corona Del Mar.  The garden center is full of lovely plants but it was hot so I only took a few photos.

I found the Gazanias and Gaillardias I was looking for fairly quickly, which doesn't mean I didn't scour the place for other plants I didn't need.

They had Itoh peonies but I've sworn I won't buy another until the one I have blooms again.


What I found extraordinary about the peonies for sale at Roger's was this tag:

No peonies landed on my cart but I did pick up a plant I had a hard time leaving behind.


I finally decided Leucadendron laxum looked a lot like a bigger version of the Leucadendron 'Jubilee Crown' I bought several weeks ago on a trip to Seaside Gardens in Carpenteria so I reluctantly put L. laxum back.

It turns out that the two plants aren't classified as part of the same species but, for now, I'll wait to see how 'Jubilee Crown' does - and whether L. laxum becomes available in a 1-gallon size pot.

I pulled up some of my gold Gazinias and planted five of the white and yellow Gazanias I selected in their place.  I'll probably add a few more if I find some in my local garden center.  I'm in the process of dividing the gold plants I pulled out and searching for spots in other corners of the garden to plant them.

I've collected a LOT of plants over the past two months but I've been lazy about putting posts together to show them off.  I'll try to correct that omission soon.