A week ago today, the weather was perfect.  The temperature was the very definition of comfortable, not too hot and not too cold - Goldilocks would have approved.  The air was clear (not an especially common occurrence here) and the sky was blue and decorated with puffy white clouds.  I was captivated and felt compelled to take photographs of the sky from my back garden. 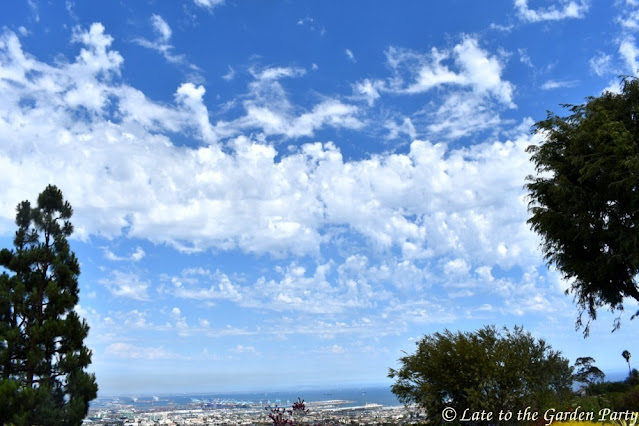 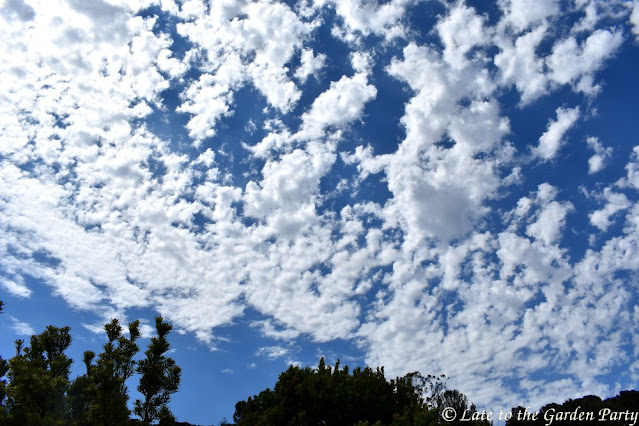 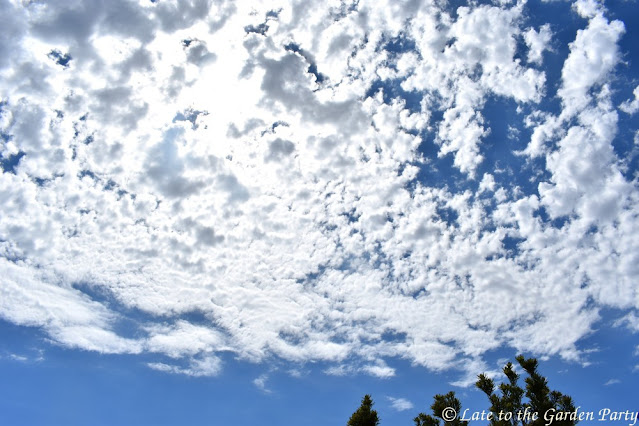 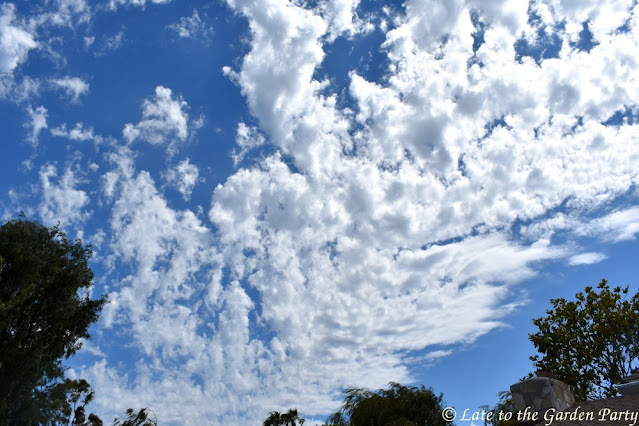 Yesterday, you couldn't see the sky for the clouds.  We often get a morning marine layer here this time of year but it normally fades away well before noon.  However, yesterday we spent the entire day wrapped in a cloud.  Neither the sun nor blue sky made an appearance.

It felt particularly odd because areas to both the east (in California's inland valleys) and the north (in the Pacific Northwest) were cooking.  Further evidence that Mother Nature can never be accused of being even-handed.  The circumstances led me to think of Joni Mitchell's song 'Both Sides, Now', which is currently playing on repeat in my head.

I hope the situations of those of you who struggled with heat earlier this week have improved and that your weather returns to something resembling normality.  For more Wednesday Vignettes, visit Anna at Flutter & Hum.

In a Vase on Monday: We've been lucky

The Northwest US and Western Canada were hit with record-breaking heat this past weekend and the pattern is expected to continue into Monday before tapering off.  Portland, Oregon could reach 115F (46C) today.  Seattle's forecast is 112F (44C).  Meanwhile, coastal Southern California where I am avoided extreme heat, although the inland valley areas here baked.  Once again, the marine layer helped us out.

There's a chance of a surge of monsoonal moisture here later this week.  The thunderstorms created by that condition are usually limited to the mountain and desert areas but occasionally they make their way as far as the coast.  Forecasters still aren't clear whether that will happen this time but, dry as we are, rain would be greatly appreciated, provided of course that lightning strikes don't start any fires.

It was nice to putter in my garden on Sunday, cutting flowers without sweltering.  Once again, I cut more than I'd planned, ending up with three arrangements.

The plentiful blooms of Daucus carota inspired the first arrangement.

The second arrangement was inspired by the flowers of Rotheca myricoides (formerly known as Clerodendrum ugandense).  It's common name is blue butterfly bush but it's not related to Buddleia.

My discovery of the first Lisianthus (Eustoma grandiflorum) blooms required me to create a small arrangement for the kitchen island.

Before I close, I have to share a current shot of last week's vase featuring the artichoke.  It held up very well overall and the artichoke actually bloomed in the vase, which was a big surprise. 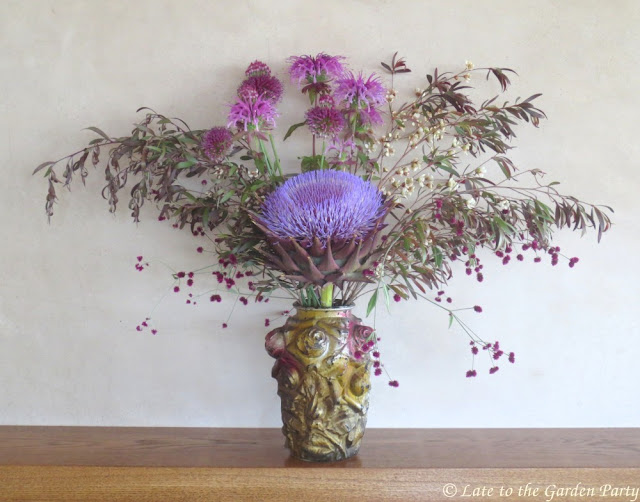 For more IAVOM contributions, visit Cathy at Rambling in the Garden. 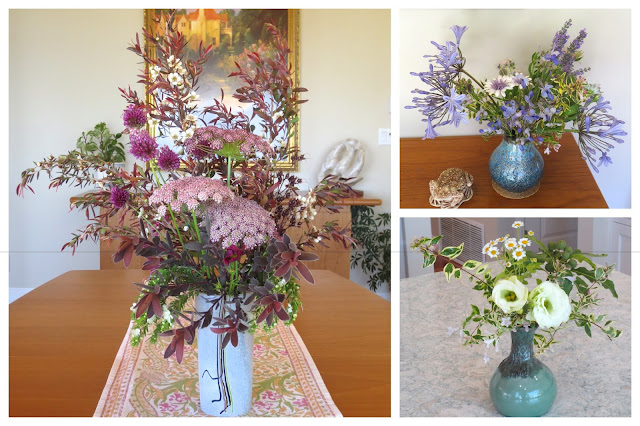 A neighbor's viewpoint on my garden

Chickadee Garden's "Facility Manager" recently presented his favorite picks among the late spring blooms in the garden he shares with his spouse.  That reminded me that I hadn't asked for my husband's input on our garden in some time.  (The input he provided on our summer garden last year can be found here.)  To compensate for cutting his hair, a chore I somehow acquired decades ago when he was still in graduate school which I've never managed to shed, I asked him to provide a current take on what he liked about the garden.  He grumbled that he'd already done that once but he didn't refuse so, when his haircut was done and I suggested a stroll around the garden before dinner, he proposed foisting the task on asking a neighbor to provide input.  He argued that because he's severely red-green color blind he couldn't fairly assess the garden - and then he shot across the street to see if our neighbor was willing to fill in before I could respond.  Neighbor S was accommodating and the two of them were back to join me on a spin through the upper level of the garden within minutes.  (Note: Familiar with our fire ant problem on the back slope, S declared it off-the-table at the outset.)

Here are the plants that grabbed S's attention:

South Side Garden
Back Garden


North Side Garden
In the process of our walk-through, there were also a couple of what I'll call "honorable mentions":

It's always interesting what draws someone's attention in the garden.  Several times during our spin of the garden, S asked "what's that?" and walked briskly ahead while I tried to ascertain what he was referring to.  I was almost always wrong on my first guess.  Do visitors ever surprise you with their preference of certain plants over others?

As we transition from spring to summer, I've done a round of general clean-up in the garden.  Not that gardens here are ever really prepared for what summer's going to throw at them but I felt mine was at least looking fairly tidy.  Then, I saw this:

I assumed that insects of some kind were responsible for the damage but I was unable to detect any sign of the culprits.  My attempt to remedy the situation using the hose's jet spray failed to make a difference and a couple of days later I noticed that my largest Yucca 'Blue Boy' was showing signs of the same problem.

Internet sources generally attribute leaf damage on yuccas to soft scale, mealybugs, or two-spotted mites.  Given the crust of what appears to be honeydew excretions and the fact that I couldn't see anything that resembles a mealybug, I guessed the first was the most likely cause.  I removed what I could with another jet spray treatment, wiped the affected leaves with alcohol, and sprayed with insecticidal soap for good measure.  Then, because I couldn't stand the look of them, I trimmed the affected leaves.

One of my smaller 'Blue Boys' had a problem of another sort.

Fortunately, that was easy to resolve with no apparent harm to the plant.

I think of Yuccas as tough plants but no plant is actually care free, is it?

On a more positive note, summer blooms are starting to arrive on the scene.  I don't have any dahlia flowers yet but I have ten sprouted plants so I can hope for flowers within the next couple of months.  Meanwhile, other plants are standing in the wings, readying themselves to take the stage.

Hopefully, the good moments will balance the bad ones this summer.

In a Vase on Monday: Funky and Frilly

I wasn't at all sure my first arrangement was going to look like much but earlier this week, when I nearly tripped over the single 'Purple 'Romagna' artichoke in my back border, I decided I "needed" to use it in a floral arrangement.  I'd actually planned to do so more than a month ago when I first saw the purple choke but I forgot about it and, when I next noticed it, it was more green than purple.  This week it was glowing a ruby-magenta color.  Some of the plants I'd envisioned pairing with it were disappointing but, overall, I'm satisfied with the arrangement even if the choke and its foliage stabbed me several times before I was done.

My second arrangement is more conventional.  It made use of the Agapanthus blooms that are currently plentiful here but the inspiration was actually provided by two Delphinium stems that made it through last week's heatwave in my well-watered cutting garden.  While much of California and the US Southwest did indeed sizzle under the "heat dome" last week, my area got off relatively easy.  We peaked at 93F (33.9C) on Tuesday before settling into the low-mid 80s for the rest of the week, thanks to our persistent morning marine layer.  People complain about our "June Gloom" but I love it and I won't be at all sad if we get a "No Sky July" and a "Fogust" too.  After an exceptionally dry rainy season, we need all the moisture we can get.