Wednesday Vignette: Flying in and sailing out

Our backyard views have been interesting of late.

Although I haven't filled my bird feeders since last winter when warnings were issued about salmonella outbreaks spread via feeders among songbirds, they flocked into our backyard en masse this week.  I wasn't successful getting photos of them chirping to one another in the trees but I caught them joyfully bathing in the fountain just outside our back door. 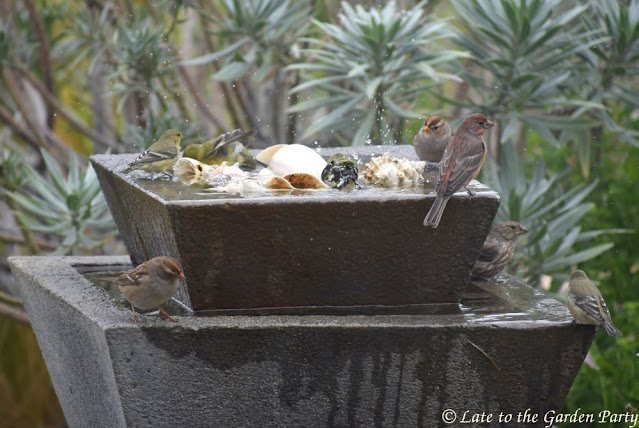 I also witnessed the departure of the first cruise ship to leave the Port of Los Angeles with passengers since cruise line operations were shut down in March 2020.  We've seen cruise ships docked in the harbor off and on during the shutdown, coming in for supplies and frequently exiting, without passengers, the same day.  I took the following photos from our backyard using a telephoto lens.

Maybe things are getting a little closer to "normal" day by day after all, at least on some fronts.

In a Vase on Monday: Clamoring for attention

After waiting seemingly forever for dahlia and zinnia blooms, I now have several of each blooming at the same time in my cutting garden, all demanding attention.  With our weather subject to sharp changes - hot and dry for stretches at a time with cool and damp intervals in between - I'm inclined to cut them when they're looking their best rather than chancing their availability in later weeks.  Next year, I'll give more thought to growing plants that combine better with one another than those I'm growing this year.

Dahlia 'Break Out' produced its first bloom last week.  It was a soft cream with pale peachy-pink accents and, when examining it on Saturday, I envisioned combining it with flowers that picked up those peachy-pink tones.  However, when I went to cut it on Sunday morning, it had shifted more definitively to a vibrant pink, throwing my plans out the window.

My second arrangement this week contains neither dahlias nor zinnias.  I've wanted to use the purple flowers of Plectranthus ecklonii (aka  tall spur flower) for some time.  I'd hoped to pair it with Dahlia 'Magic Moment'  but that plant, although now in bud, is taking its sweet time about blooming so I decided to go ahead before the Plectranthus finishes its season.

Dahlias 'Enchantress' and 'Gitt's Crazy' were competing for a third slot.  As they most definitely aren't suitable to combine and as I wasn't prepared to create four arrangements, I went with 'Enchantress'.  'Gitt's Crazy' will probably get a vase on my kitchen island within another day or two but I'll spare the reader a fourth arrangement.

Cleaning Up: One step at a time

In coastal Southern California, fall is the best time to refresh the garden.  As we're still vacillating between summer and fall weather, it's too early to do any extensive planting but I've taken advantage of the cooler temperatures we've had off and on to get started on some of the smaller clean-up projects.

I started by sifting my compost.

I've distributed all the screened compost.  It doesn't go far enough but every little bit helps.

My biggest project thus far involved one of my favorite beds in the front garden.

The last little project this week involved planting an Aloe lukeana I received from Gerhard of Succulents and More back in August.

This week, we had more uncomfortably warm days (mid-90sF) than cool ones but the weekend forecast promises the return of cooler temperatures.  I'm looking forward to (literally) digging into some bigger projects.  Meanwhile, I'll send you off with a wish of that you find some happy hours gardening and a couple of pretty floral shots from my garden this week.

Wednesday Vignette: The root of the problem

While working on a project in the front garden, I found I needed my shovel, which I'd left in the back garden.  On the fly, I decided to take a moment to dig up the mimosa tree (Albizia julibrissin) seedling I'd noticed a few days earlier.  I'd removed a seedling from the same spot just weeks before and, assuming that I simply hadn't gotten the entire root when I pulled it out, I thought all I needed to do was to move the flagstone adjacent to the new seedling to ensure I got the whole thing.  I figured that was a 5-minute task.

I moved the flagstone and started digging only to meet immediate resistance.  Digging along the sides of the plant, I discovered the root of the problem and called in reinforcements to help me get it out.

I can only hope we got the majority of it.  But, if there was one root this size 8 to 10 feet from the trunk of the dying mimosa tree we'd taken down last October, is it reasonable to believe that there aren't other roots like this?  Is this mimosa tree going to haunt me forever?  According to one source, "Silktree...regenerates by sprouting from roots following top-kill or injury."  Halloween is still more than a month away but that citation sent a chill down my spine.

It seems that the self-sown seedlings I've previously found are the tip of the iceberg.  Let the reader beware when planting this tree!

In a Vase on Monday: It's all about the dahlias

At last, the dahlias seem to be getting in gear.  My zinnias are already giving in to mildew and I expect that the dahlias may soon follow so there's little reason not to grow for broke and cut nearly every bloom as it makes an appearance.  That philosophy led to the creation of three arrangements this week.  I was tempted to put together a fourth but that was too much even for me.

Dahlia 'Gitt's Crazy' takes its time reaching bloom stage but, when it does, it doesn't seemed inclined to stop.

Like 'Gitt's Crazy', Dahlia 'Loverboy' is a holdover from last year.  The tuber I saved was small and I almost tossed it in April but I decided it wouldn't hurt to pop it into a small plastic pot to see what happened.  It sprouted and, when space opened up in one of the raised planters in my cutting garden, I moved it here, not really expecting much.  To my surprise, it produced buds and, late last week, its first bloom.

Dahlia 'Enchantress', also a holdover from prior years, is challenging 'Gitt's Crazy' in the bloom department, winning it inclusion in another arrangement this week.

We had a lovely stretch of cool temperatures last week, allowing me to start some of my fall garden projects.  It's expected to get warmer again this week but then that back and forth bounce between summer and fall is par for the course here.  However, work in the garden may be confined to early morning and late afternoon hours until cooler temperatures return.

For more IAVOM creations, visit our host, Cathy at Rambling in the Garden.