In a Vase on Monday: Seasonal Succulents 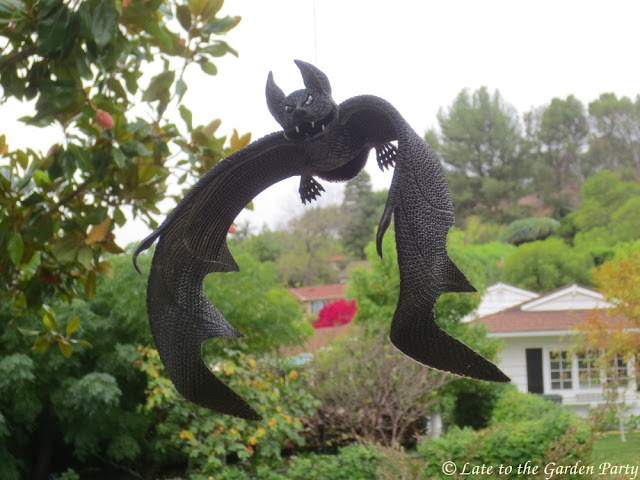 In keeping with the holiday, I thought I'd decorate a pumpkin this week and, as I haven't used succulents in an "In a Vase on Monday" post this year, it was high time to do so.  My inspiration stemmed from the photos of succulent-topped pumpkins I've seen on-line and, more recently, on a visit to one of my favorite garden centers.

After viewing a couple of how-to videos on pumpkin decorating, I decided to give it a try.  I picked up a fancy pumpkin at the supermarket and, as I wasn't about to venture into a craft store so close to Halloween (too scary!), I made do with the craft supplies the supermarket offered, a tacky spray and a glue pen.  I already had sphagnum moss on hand.

With a chance of rain on Sunday (Halloween is about tricks as well as treats), I went to work on this project on Saturday so I could keep my mess outside.  I started by collecting succulent cuttings from my garden. 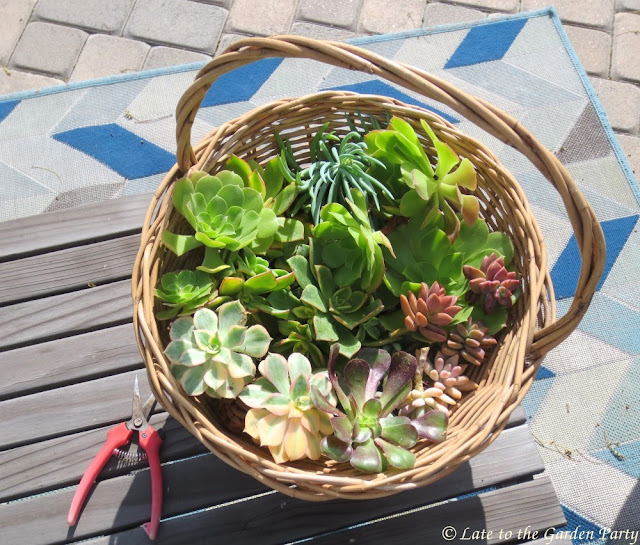 The succulents were dusty and dirty so I positioned them on a pair of plastic chairs and hosed them off before I began working with them.

Then the pumpkin came out.


I meant to take in process photos as I positioned the succulents but I got absorbed by the project, as well as getting my fingers sticky with glue, so there aren't any further in process photos.  The construction wasn't difficult, although some of the heavier succulents drooped at times and had to be re-positioned.  The experts use a hot glue gun, which apparently does a better job keeping the succulent pieces in place, but I didn't have one of those. 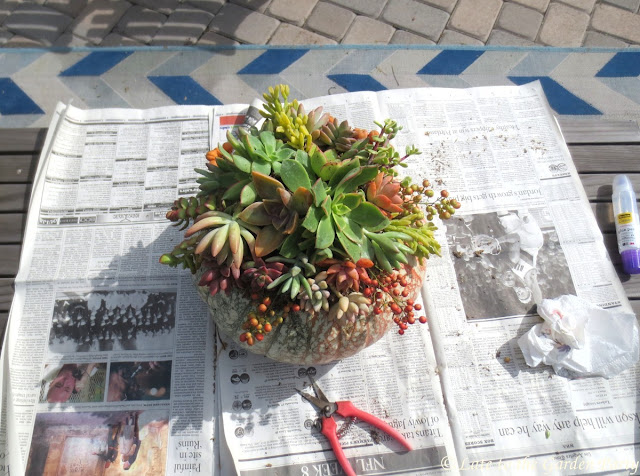 After cleaning up, I took photos of the completed pumpkin from 4 angles outside.


I'd forgotten to take a top-view photo of the arrangement when I was working outside so I did that after coming inside. 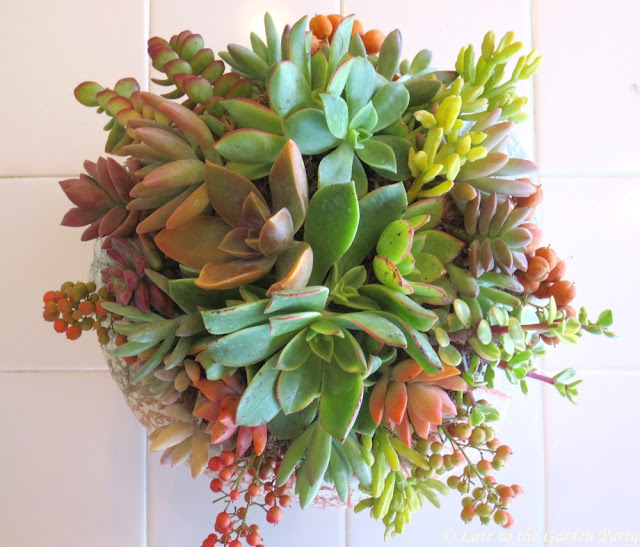 In about a week, after the glue has been allowed to thoroughly dry, I can mist the succulents to keep the arrangement fresh.  When the pumpkin itself begins to decay, the succulent cuttings can be removed and reused in the garden.  I've already popped the cuttings I didn't use back into the garden.

The completed pumpkin currently sits on the dining room table. 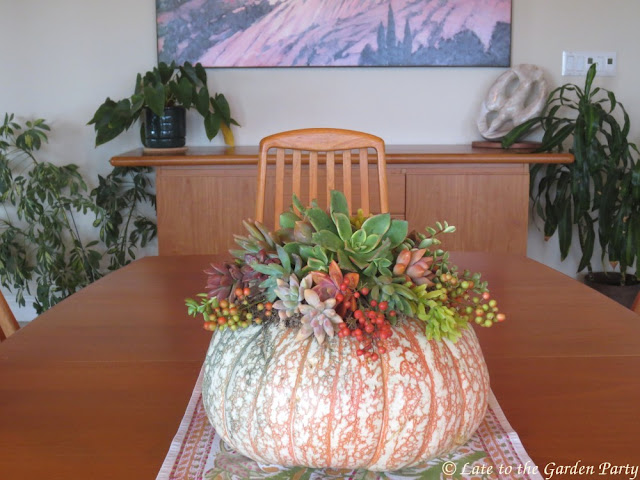 The displaced vase from last week was moved to the front entry, sans the Grevillea and poppies, which were past their prime. 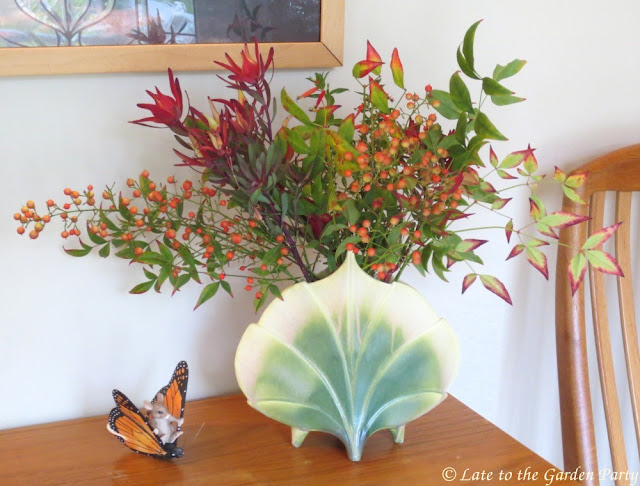 The exterior entry has been dressed up for the holiday too.

I hope you enjoy the holiday!  Visit Cathy at Rambling in the Garden to see what she and other meme participants have cooked up this week.

I'm joining Loree of danger garden in focusing on the plants that are putting on a good show this month.  A few are the usual suspects, the plants that reliably bloom at this time each year.

The next one took me by surprise.  It's reported to bloom in winter and spring but it seems to march to its own internal drumbeat.

There are also some foliage standouts.

I started this post with a photo of Barleria obtusa.  When I was looking into methods of propagating Barleria obtusa, I unexpectedly turned up a connection to another favorite plant in my October garden.

Sometimes plant identification drives me crazy.  Don't even let me get started on succulents.

Visit Loree at danger garden to see what she and other gardeners have on their favorites lists this month.

Wednesday Vignette: An end to a sad saga?

Last week I took a few wide shots of my front garden looking northwest toward the street.  Pretty as I think the view was with the trees lit up by the setting sun, my garden wasn't the real focus. 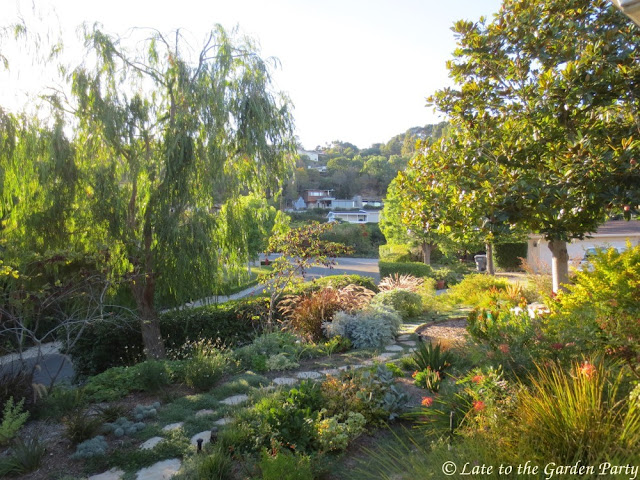 My focus was the white house of a neighbor three doors up.

That neighbor, who has at regular intervals over the past five years registered complaints about how my trees interfere with her view, has put her house up for sale.  She hasn't planted a "for sale" sign at the end of her drive but another neighbor steered me to the listing on-line.  All I can say at this point is that I wish her well and godspeed with the sale of her home.  If those of you who live nearby feel the earth move in the coming months, never fear - it's not an earthquake but rather me doing an epic happy dance to celebrate my neighbor's good fortune in concluding her sale.

This is my Wednesday Vignette.  For others, visit Anna at Flutter & Hum.

In a Vase on Monday: Similar but not the same

After failing in my plan to create a fall-themed vase resplendent with oranges and reds last week, I powered ahead with that image in mind this week.  As appears to have become my habit, I got carried away with my snipping, ending up with material ample enough to fill 2 vases.  The colors are similar and I used some of the same types of plants in each but I think they still have distinct personalities.


The first vase was overstuffed.  Eliminating the Leucadendron would have given it an airier feel but, once stems are cut, I'm usually loathe to toss them out and I didn't have the patience to build yet another vase.  The second vase is a bit more balanced but it could probably have done with fewer stems too.


Although we don't get much in the way of fall color in my area of Southern California, I'm happy that I was at least able to conjure up some of the season's warm tones this week.  Here are the vases in their places:


For more vases, visit Cathy, the host of this weekly "IaVoM" meme, at Rambling in the Garden.

Fall is unequivocally the best time to plant in Southern California.  It's also the time of year I spend the most time plant shopping.  The weekend before last, a friend and I hit 4 nurseries/garden centers on Saturday and a sale at my local botanic garden on Sunday.  This post provides a rundown of our expedition.

Our first stop was Australian Native Plant Nursery in Casitas Springs.  It was late morning when we arrived but already very hot.  The sun was high so my few photos are sun-drenched.

Before heading back to the freeway, we dropped in at Ventura Cactus & Succulents.

After lunch in Carpinteria, we spent a little time perusing Porch, a retail store offering nature-inspired goods for indoor and outdoor settings.

From there, we headed to Seaside Gardens, also in Carpinteria.  Seaside is one of my favorite nurseries.  In addition to a fabulous collection of plants, they have an extensive demonstration garden featuring mature specimens of many of the plants they sell.  I took fewer photos than usual because the sunlight was intense but you can find photos of a previous fall trip to Seaside here.

Our final stop before heading homeward was Terra Sol in Goleta.

The next day we headed to the South Coast Botanic Garden, which is about 5 miles from my home.  The botanic garden has discontinued its annual fall plant sale in favor of smaller "shop local" events.  After checking out the plants for sale, we did an abbreviated walk through the garden.


So what did I bring home?  I featured my succulent plant purchases in an earlier post but here are the rest:


After getting some rain earlier this week, the Santa Ana winds turned the heat up again here but temperatures are expected to drop once more this weekend.  I'm already anticipating another plant shopping run.  How about you?  Have you picked up any new plants?

A Cause for Celebration (and a Wednesday Vignette)

If you've read my blog for a while, you probably know that I have something of an obsession with water and, more specifically, rain, which we've had precious little of for the last 5 years.  According to the National Oceanic & Atmospheric Administration (NOAA), Los Angeles had average precipitation of just under 15 inches per year from 1981 through 2010.  Last year, my personal weather station recorded a total of 5.65 inches of rain for the season beginning October 1, 2015 and ending September 30, 2016.  And last year was an El Niño year, which was expected to bring higher than average rainfall.  As it turned out, that rainfall shifted northward, benefiting Northern California more than Southern California.  Many pundits believe this will be a La Niña year, bringing us below "normal" rain.  As last year's forecasts were off, at least as they related to SoCal, I'm hoping for the best but also trying to keep my expectations in check.

That "wait and see" attitude governed my outlook on the forecasts predicting a 40% chance of light rain last weekend.  According to one weather agency, the rain expected for my area was on the order of 2 one-hundredths of an inch, which was certainly nothing to get excited about.  However, I watched the clouds closely.  Saturday, the promise of rain hovered above us, literally.


Saturday night we got all of one one-hundredth of an inch of rain.  Sunday's clouds looked promising at first but less so by the end of the day.


But, wonder of wonders, we got almost 3 tenths of an inch of rain early Monday morning.  I slept through most of it but woke to a glistening backyard.


Now, I admit that 0.31 inches of rain, the current total through today, isn't a lot but even a small amount of rain on a roof sheds a considerable amount of water.  My previously empty rain barrels aren't empty any more.  The 50-gallon tank is full; the 160-gallon tank is half-full; and the 265-gallon tank is at least one-quarter full.

Now that's a cause for celebration!  There was another 40% chance of rain in the forecast for a week from Thursday but it's already disappeared; however, hope springs eternal.