Seeing 2020 in the rear view mirror

How do you review a year like 2020?  It's truly the most horrible year in my memory.  As if the political scene wasn't bad enough already, it got worse as elected leaders failed to lead and divisions within the country intensified, encompassing even public health and safety issues.  A pandemic that other countries managed well (relatively speaking) spun utterly out of control in the US due in large part to inconsistent messaging and controls leading to a death count of 344,000.  Restrictions both self- and government-imposed kept us from traveling and seeing friends and family in person.  Even basic chores, like grocery shopping, became fraught with complications.  While stocks somehow managed to soar, many parts of our economy tanked as smaller business were crippled and many closed, perhaps permanently.  Millions of people lost jobs and our homeless and food insecurity problems worsened.  Unemployment agencies and food banks struggled to get help to those who needed it and government assistance was sporadic and, in some cases, riddled with fraud.  On top of all that, natural disasters plagued the country, including California, which lost more acres to wildfire than ever before.

For many people, myself included, their gardens became even more significant as we spent more time at home.  Plant shopping, one of my favorite activities, was dramatically curtailed this year, limited almost entirely to my local garden center and mail orders.  Visits to public and private gardens were also severely curtailed.  But my garden was still my main refuge so I've pulled some of my favorites photos of it to share with you, as well as a few photos taken in nearby locations.

Wednesday Vignettes: Changes in the Weather

After weeks of unseasonably warm, dry weather, we had a sudden shift this week with our first real rainstorm of our all-too-short rainy season.  I heard the forecasts for days before the event but chose not to put a lot of stock in the possibility as such chances of rain frequently fail to materialize.  But this storm system gained strength and, just after midnight on Monday, we heard the first deep rumble of thunder, followed shortly thereafter by pounding rain.  Rain continued at intervals, off and on, until Monday night.  In my location, we collected an inch of rain in total.

Every time the rain stopped and splashes of blue sky appeared, I feared that was it.  Late Monday morning, as the skies appeared to clear, I took my camera outside to catch the raindrops sparkling in the sunlight.


Within perhaps half an hour of my jaunt through the garden with my camera, the clouds were back, followed by pounding hail, an unusual event here. 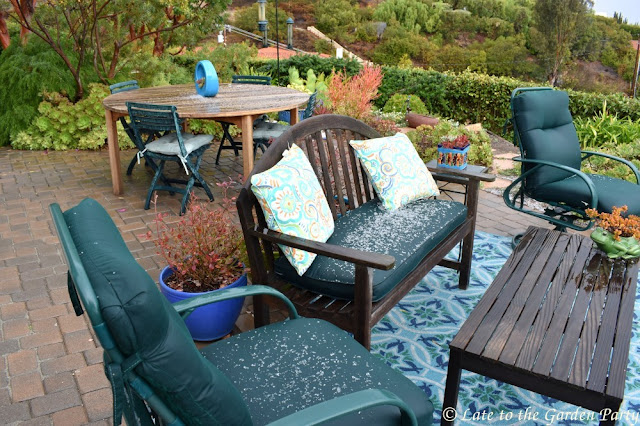 Only one of my three rain tanks, the 50-gallon one, is completely full but the 160-gallon tank is almost 75% full.  In addition to what flowed into the tank from the roof surface on the north side of the house, I collected rain from a chain hung on the east side of the roof in plastic trugs, which I then transferred to that tank.  The largest, 265-gallon tank, is harder to calibrate and is fed off the smallest roof space, our garage, but I'd estimate it's 25% full.  All three tanks were empty when this storm moved in.

Yesterday was cold (in terms of how we evaluate "cold" in coastal southern California) and I only did a bit of garden cleanup.  But, to celebrate the clean air, I took a couple of photos, starting with the sunrise.

I ended the day, with this shot of the mountains to the east, covered in snow, and the last full moon of 2020 rising as the sun set. 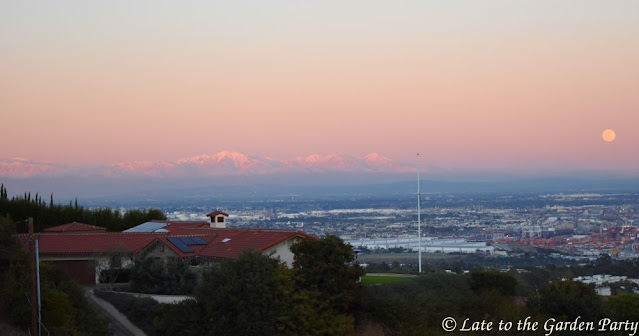 The title of this post was inspired by a song that sprang to mind as the result of our weather roller-coaster ride this week, Changes in the Weather by Barefoot Truth.

In a Vase On Monday: Prelude to rain

Expecting our first real rain of the season, I cut flowers with little chance of holding up well for today's arrangements, not that I had an extensive list of prospects to begin with.  The focal point of the first arrangement are flowers of the Hong Kong orchid tree (Bauhinia x blakeana), which are currently prolific but which don't stand up well to either wind or rain.

I picked more flowers of the pink powder puff shrub (Calliandra haematocephala) for the second arrangement.  As you can imagine, powder puffs don't hold up well against rain either.  The stems of the frequently sheared shrubs are also annoyingly short and the flowers don't last long in a vase but I admit I'm fond of them anyway.

I'd cut a few stems of paperwhite Narcissus too but I decided they didn't work well with either of the previous arrangements so the the leftovers went into a small vase to sit in my office.

If we don't get measurable rain, I'll be mightily disappointed.  I consulted two forecasting agencies online Sunday afternoon, one projecting a 95% chance of rain and the other a 72% chance but it wouldn't be the first time that high expectations crashed due to an unmovable ridge of high pressure air.  Fingers crossed! 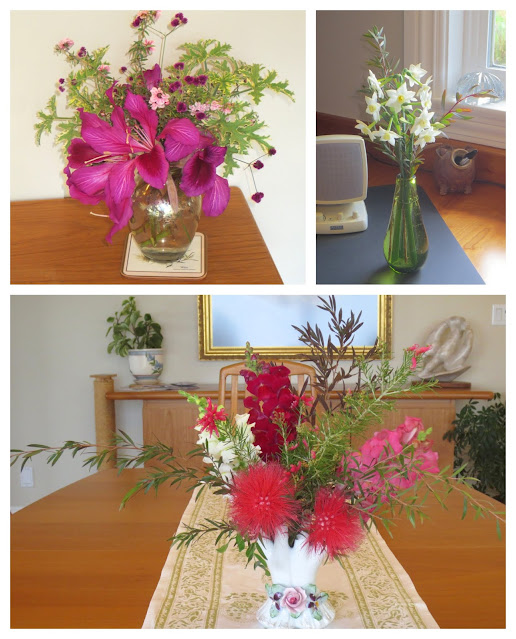