In a Vase on Monday: Moody Blues

Unlike Cathy at Rambling in the Garden, the gracious host of the weekly meme entitled "In a Vase on Monday," my floral compositions don't usually bring music to mind.  However, when searching for a descriptive title for today's bouquet, "Moody Blues" popped into my head.  I can't say that I've thought of that British rock band in many, many years but they were among my favorites when I was a kid.  Despite that fact, my choice of the title relates to the colors of my floral and foliage materials rather than any song written by the band. 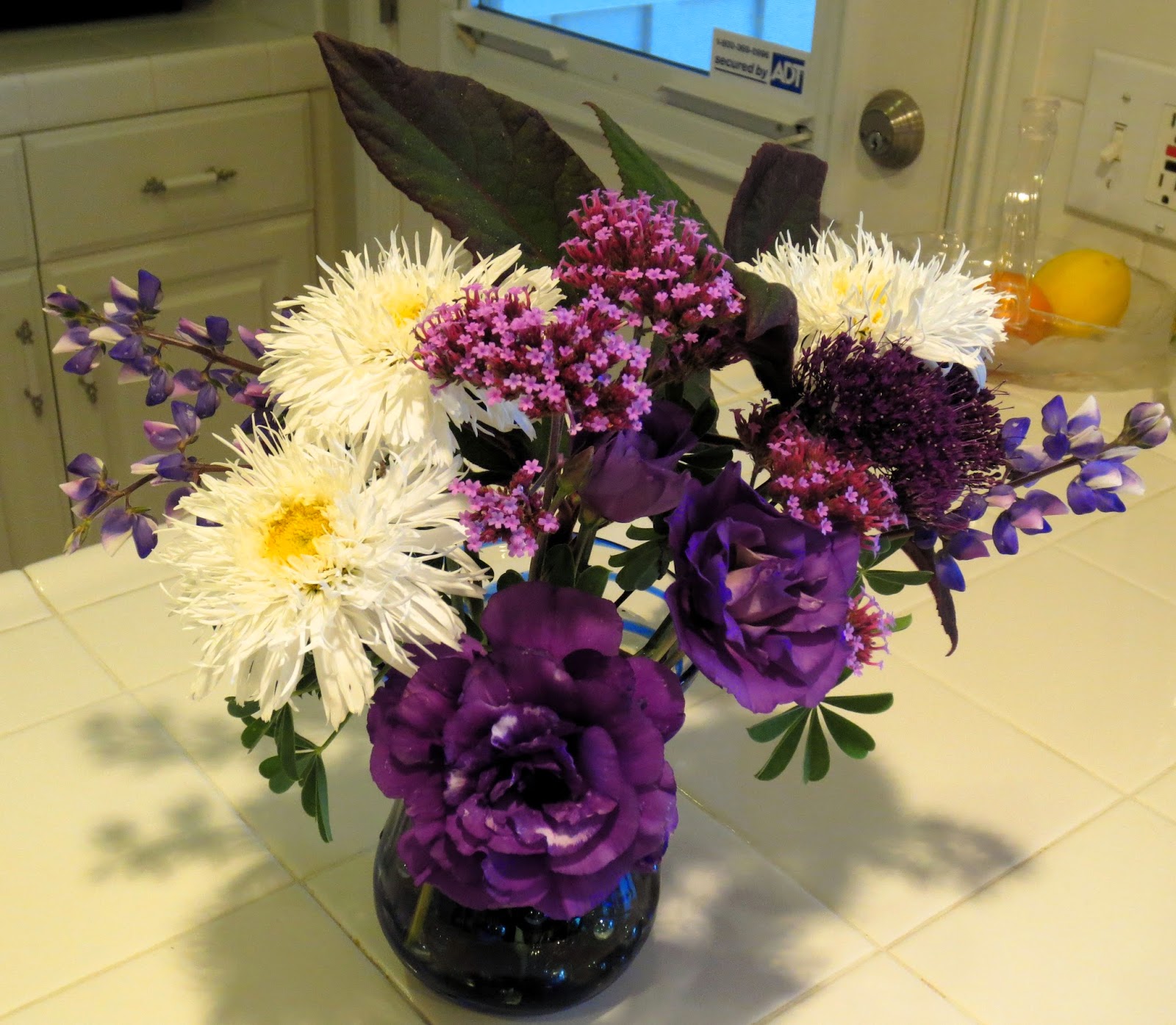 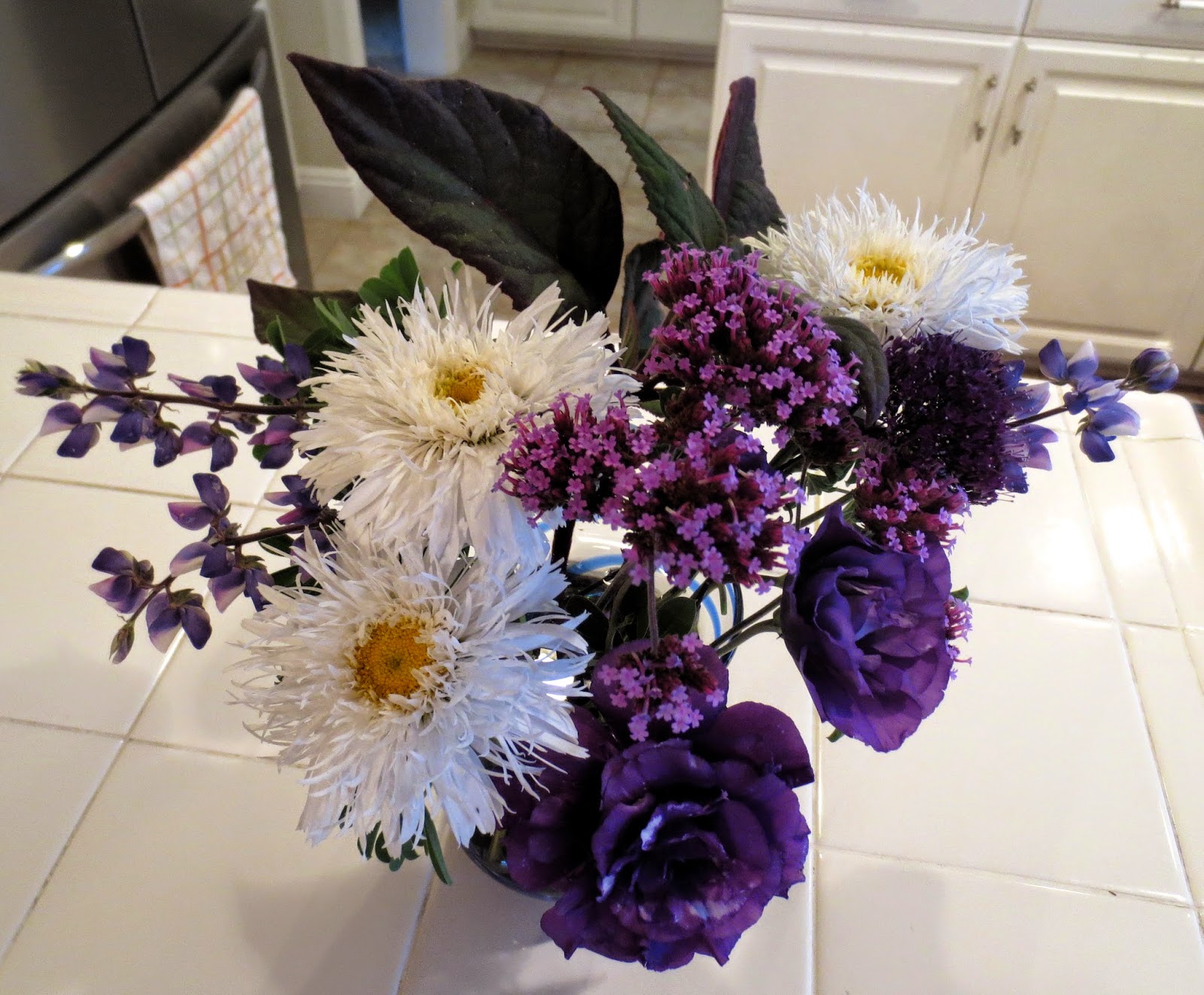 I picked a stem of the beautiful Eustoma grandiflorum 'Borealis Blue' (aka Lisianthus) I featured as my favorite plant of the week last Thursday.  One stem, consisting of 3 flowers, was all I could bear to cut.  While it looks quite blue in the garden, it reads more purple than blue inside the house in a vase but some of the petals show a blue tinge.  There's also a tiny touch of white in the central blossom. 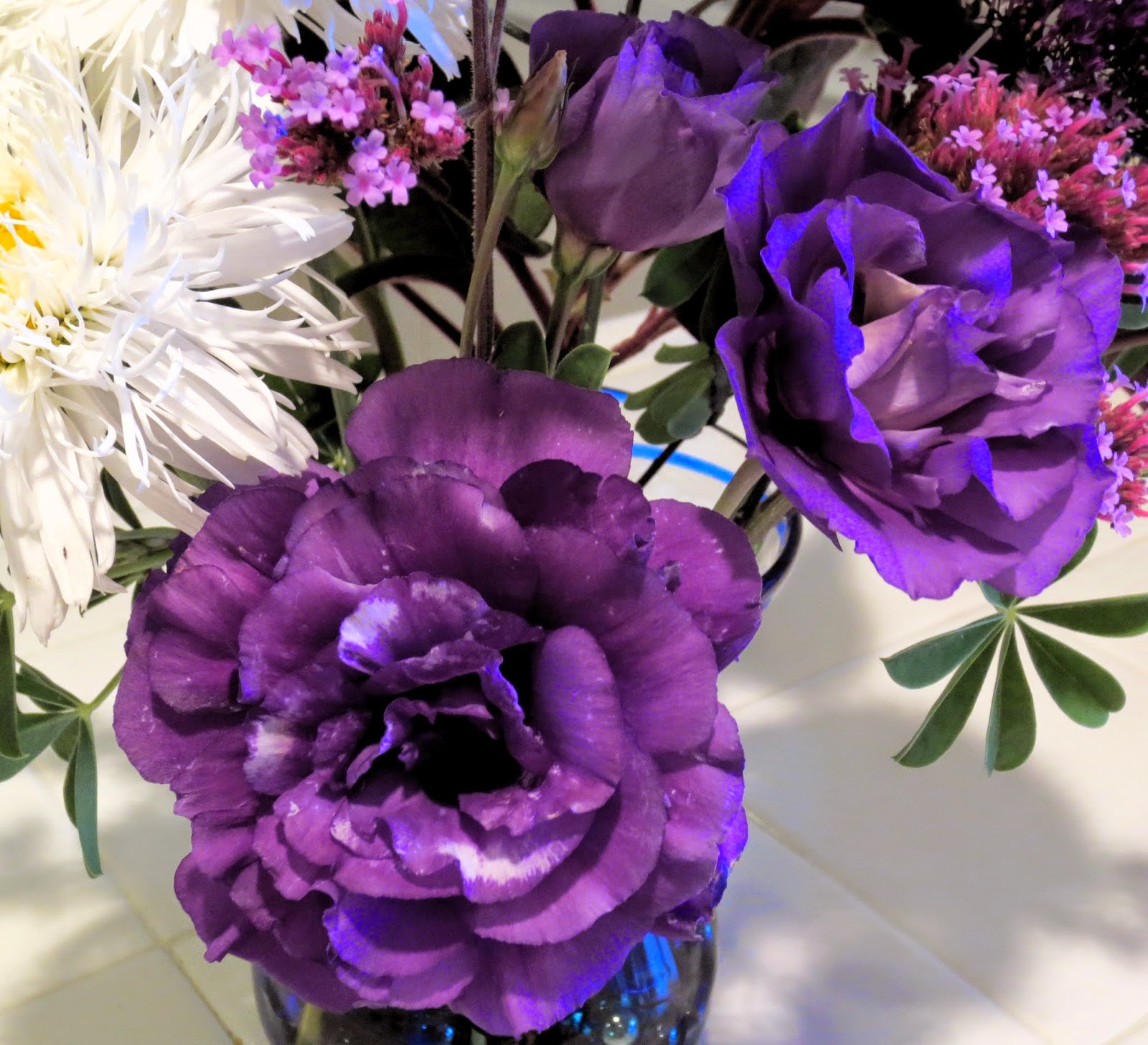 I cut 3 stems of a wild lupine to accent the Eustoma.  I have a bush lupine growing in my garden but this is the first year a wild lupine has made an appearance.  I think the seed must have hitchhiked here in a load of topsoil I ordered when we built our newest border in the backyard.  Although it doesn't match the color scheme I was going for in that particular area, I'm going to let it be in the hope that it will establish itself in my garden. 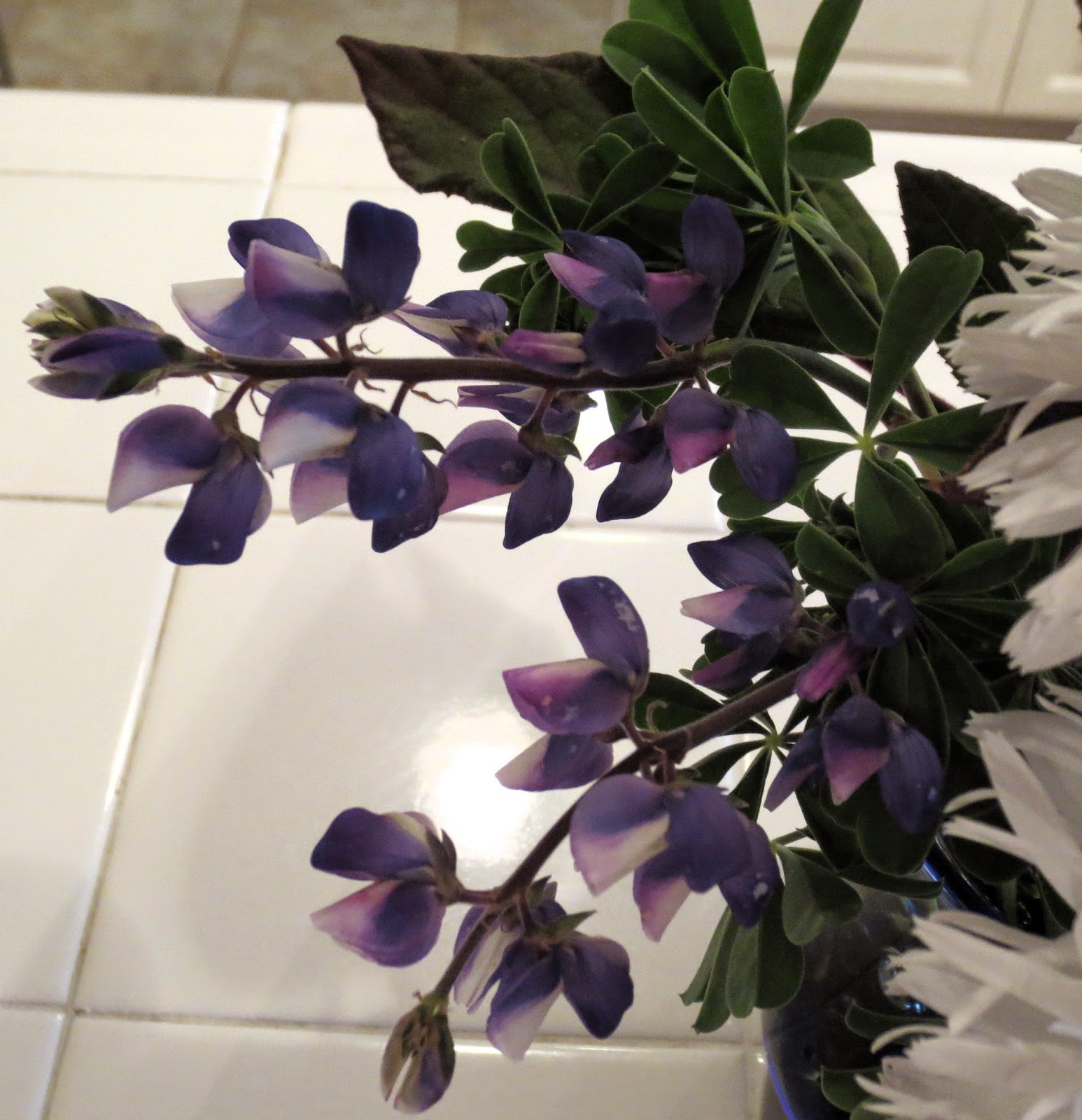 I also added a few stems of a frilly form of Leucanthemum x superbum (aka Shasta daisy), Trachelium caeruleum (possibly 'Hamer Pandora'), which is just now coming into bloom here, and Verbena bonariensis.  The Verbena doesn't appear to make a particularly good cut flower as it continuously drops tiny petals but the amethyst color picks up the pinkish purple tones in the lupine so it remains in the vase for now.  The foliage accent is a stem of the "ever-purple" Ageratum corymbosum I've used before - it definitely adds a moody touch to the arrangement. 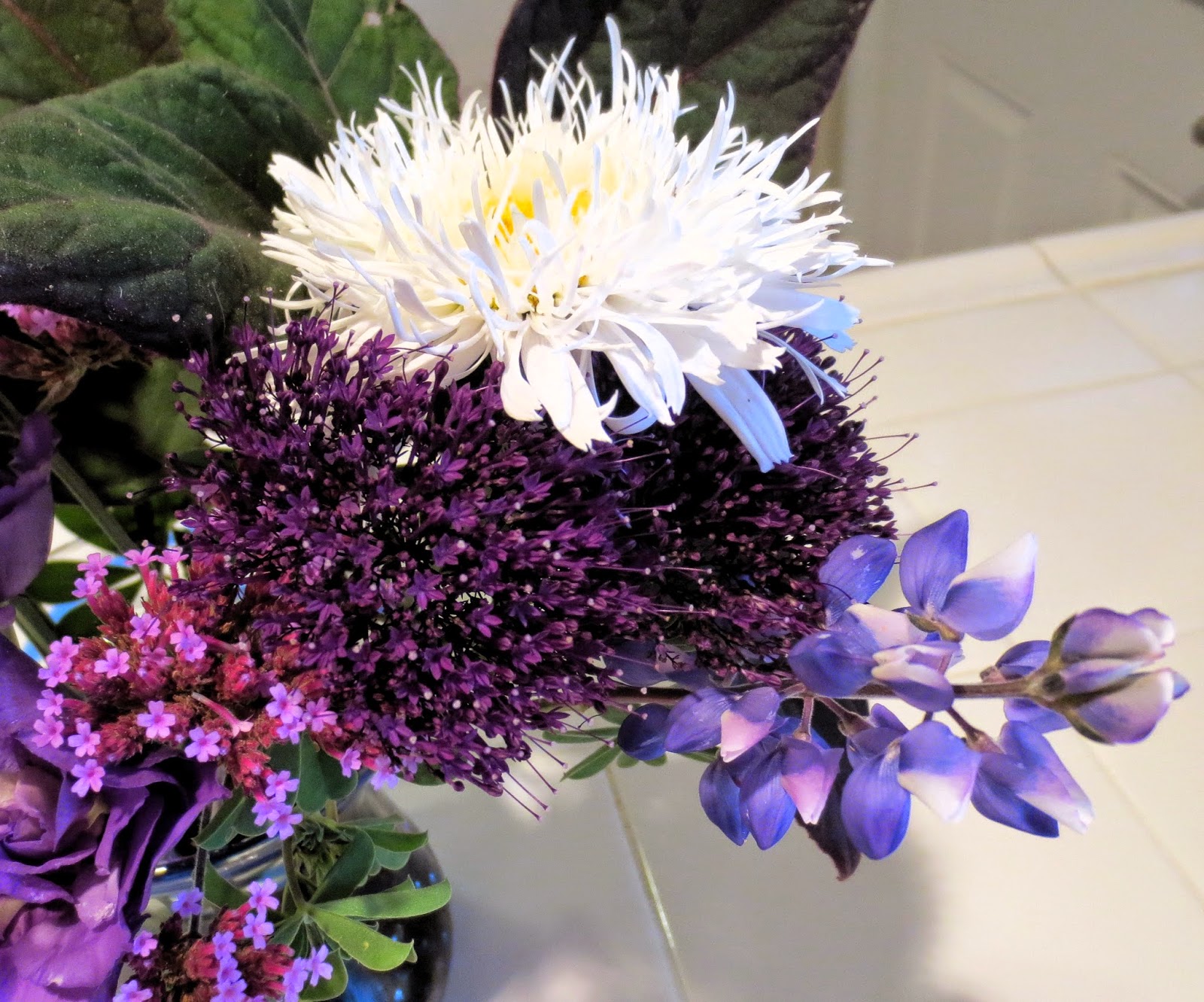 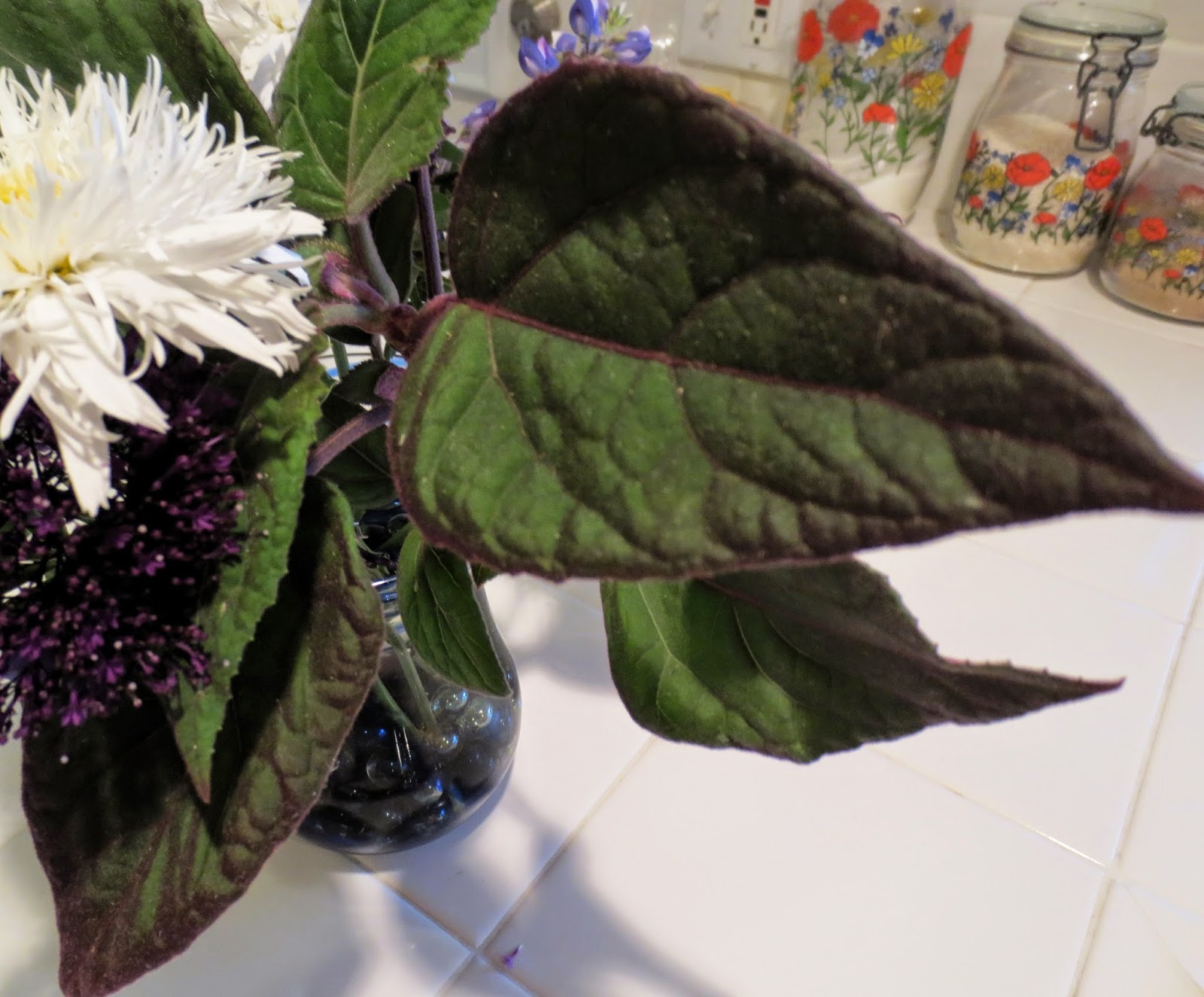 Please visit Cathy at Rambling in the Garden to see her composition this week and to find links to the creations of other contributors.  To give the Moody Blues their due, here's a link to one of their compositions, titled "Blue World."