So what happened to the persimmons this year?

I inherited 2 persimmon trees with the house.  They were planted by the guy we bought the house from, which means they're relatively young trees as he owned the house just over a year.  They didn't produce much in the way of fruit during our first years here but they did have pretty fall foliage.

This year, the foliage looks terrible but the trees produced a lot of fruit.  While many of the immature fruits dropped early on, quite a bit was left to ripen on the trees.

It disappeared rather rapidly.  The fruits nearest the fence top in the vegetable garden went first but these were quickly followed by the fruits on the tree in the dry garden.  I initially held the raccoons responsible for knocking the fruit to the ground, even when I found a squirrel polishing off a decaying persimmon.

But the squirrels don't need help from the raccoons.  After all, they have the run of the place during the day.

There are no persimmons left on either tree.  Meanwhile, the squirrels are also running off with the guavas, hiding some and eating others.

Really, our backyard offers squirrels a full range of amenities.


Squirrels, they own the place. 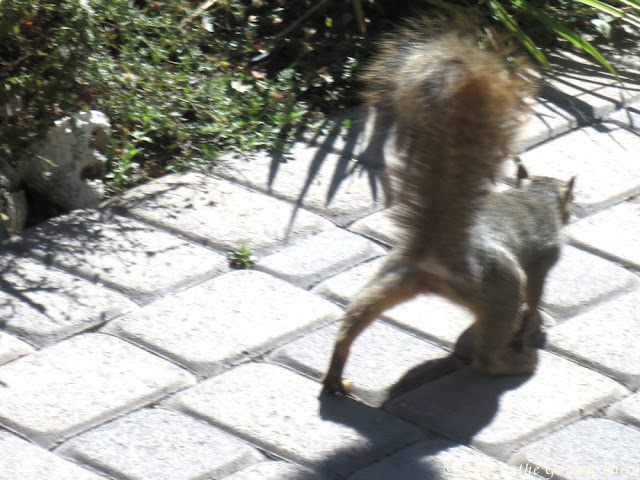