In a Vase on Monday: Rose starts but doesn't finish

A week ago, it felt as though fall was finally getting its start in my area of Southern California but before the sigh of relief escaped my lips, the heat returned with a vengeance.  Temperatures soared, hovering just below 100F (37C) all weekend.  We're not expecting significantly cooler weather until mid-week.  Under the circumstances, I didn't spend a lot of time outside deliberating on flower selections for this week's "In a Vase on Monday," the meme hosted by Cathy of Rambling in the Garden.  I clipped a peach-colored rose because it's the first time the shrub has bloomed in recent memory and I knew the flower wouldn't last long in the heat.  I snipped a range of other flowers in similar and complementary colors and made a bee-line for the relative comfort of the house.  The rose initially served as the vase's centerpiece but it looked out of place so I removed it.

I returned the succulent vase created 4 weeks ago to the dining table and placed the new vase in the front entryway.

Leftover flowers went into a small bud vase, which I placed next to my computer.  As I was preparing this post, I noticed that the tentacle-like stigmas on the Grevillea were moving.  At first, I thought maybe the air conditioner was blowing them about.  But the movements were irregular and uncoordinated.  Then, one by one at intervals, tiny beige blobs, each smaller than a grain of rice, landed on my desk.  They were squishy to the touch.  They didn't move and, in short order, they dried up.  But the Grevillea continued to twitch periodically.  It appears that this tiny creature, whatever it is, was parachuting from the flower to my desk, dying soon afterwards.  So, the Grevillea is no longer in this vase. 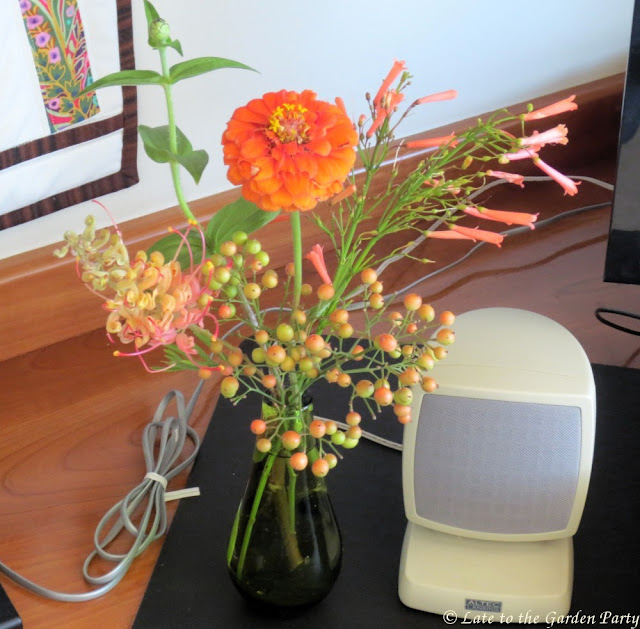 I put the rose in a tiny vase next to the kitchen sink.

Lest you wonder, despite the heat there are still some pink Eustoma grandiflorum in bloom in the garden but I decided to make this a pink-free post.

Visit Cathy at Rambling in the Garden to see what she and other participating gardeners have put in their vases this week.