In a Vase on Monday: Pure Sunshine

This week the garden itself selected the flowers for "In a Vase on Monday," the meme hosted by Cathy at Rambling in the Garden.  Senna bicapsularis, one of my favorite fall bloomers, suddenly burst into flower.


My 'Buttercream' roses are also blooming, perhaps in response to our cooler nighttime temperatures.  The roses pair beautifully with the Senna, making them the obvious choices for my vase. 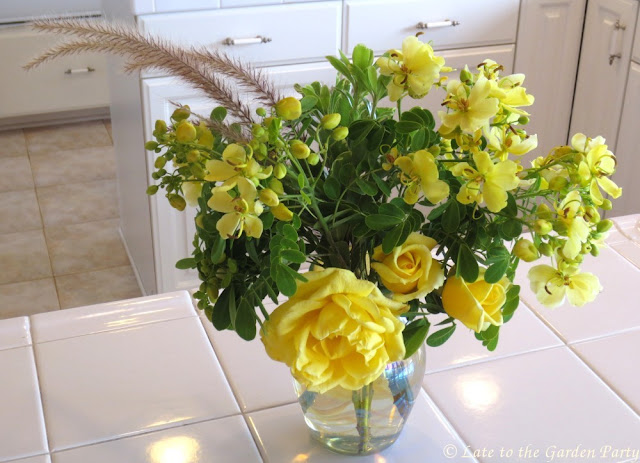 I kept the plant selection relatively simple, adding just 2 other plants, one to provide foliage support and the other to pick up the brown tones at the center of the Senna flowers.

But the peach 'Medallion' roses have also produced a few new blooms and, as our daytime temperatures are back in the upper 80sF (30-31C), I decided they'd last longer inside the house so I have a second vase this week.  The roses have weak stems that don't do a good job holding up the blooms.  I probably should have left the roses alone in the vase but the Zinnias in the vegetable garden have also produced an abundance of new blooms, demanding attention, so I stuffed them into the vase as well.  The arrangement makes me think of a flamenco dancer with a flouncy skirt.


The first vase sits in the front entry, providing a cheerful welcome. 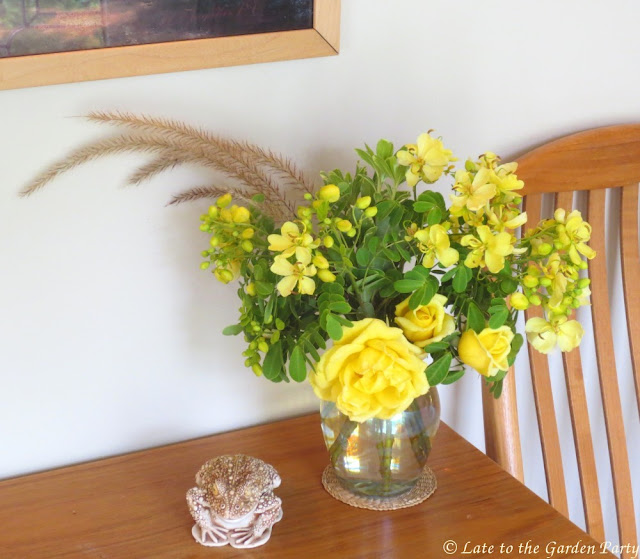 The second vase sits on the dining room table, partly because it 's a better match with the table runner and partly because that location allows it to be viewed from 2 sides. 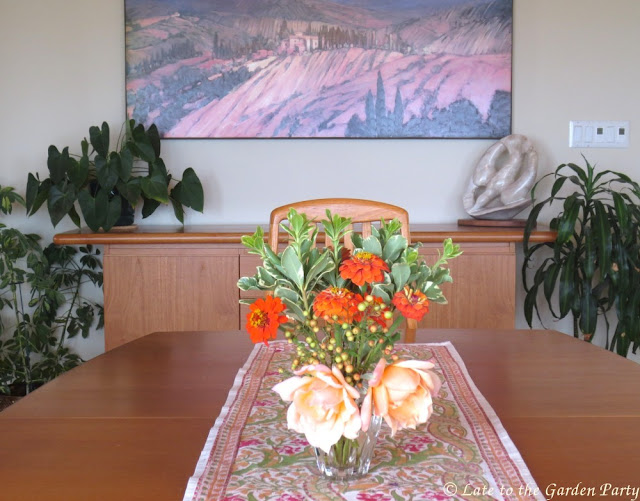 Last week's vase is still intact, although I've removed some of the Eustoma's dried up blooms.  One of the 2 Magnolia cones has dried and turned brown but it hasn't yet dropped.  The 6-week old succulent vase has finally been dismantled.  I planted most of the cuttings, tossing a few, not because they were unusable, but because I already have plenty of those varieties.

Visit Cathy at Rambling in the Garden to find more vases created by gardeners celebrating what's "In a Vase on Monday."