Are painted lawns a sensible response to the drought?

California has been in a serious drought for 4 years but the public response changed dramatically in 2015 when the governor declared mandatory water restrictions.  Water districts were ordered to reduce water use by 4% to 36%, depending upon their history of prior use, with the goal of reaching a 25% reduction in urban water use by 2016.  The battles and finger-pointing that accompanied the announcement have moved into the background and Californians have made surprising progress in meeting the new requirements.  As of July, California as a whole had exceeded the goal, achieving a 31.3% reduction.  People are taking shorter showers, gardeners are changing out their plants for less thirsty specimens, and many lawns are going brown.  Local garden centers are advertising artificial lawns but I've seen relatively few installations in my own area to date.  However, I recently saw a brown lawn go green overnight with the help of a coat of paint.

When I first noticed the painted lawn at a nearby beach city mall, I didn't think it looked too bad, at least from a distance as I stared out the window of the restaurant where I was having lunch.  A couple of weeks later, when I was back at the mall, I brought a camera and took a closer look.  Again, if you're passing by quickly, it doesn't look too bad. 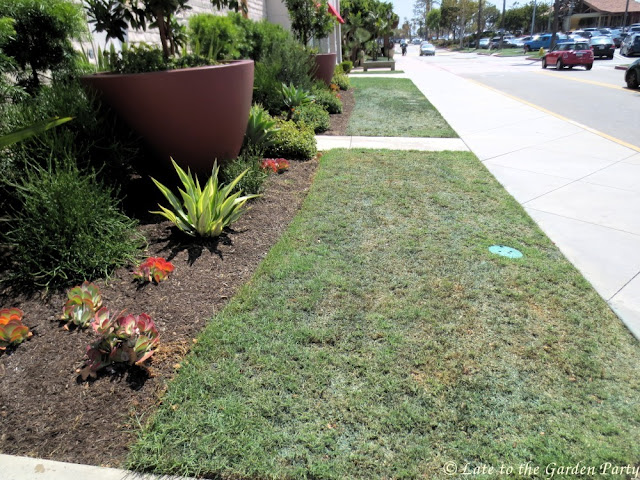 But a close inspection reveals its drawbacks. 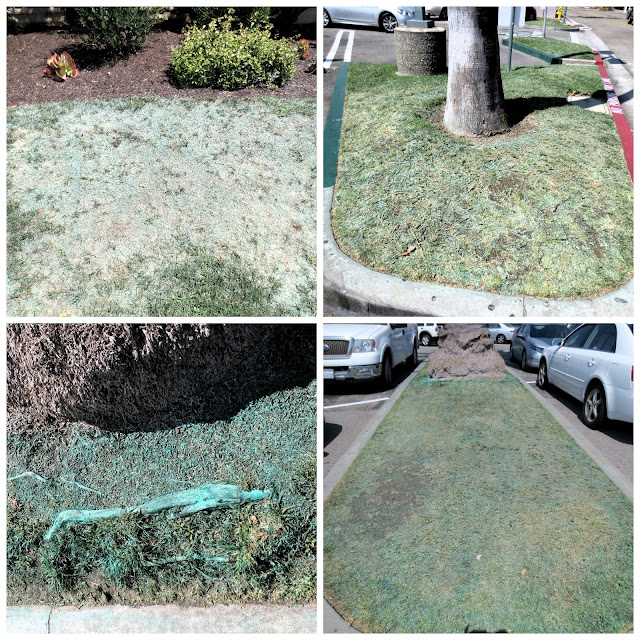 It hasn't stood up well to foot traffic.  The color seems bluer than it was when the paint was first applied but, with sun exposure, perhaps that's to be expected.  When the rain returns, the grass will presumably return to green on its own, assuming the paint doesn't cause permanent damage, but as our rainy season is short it will as quickly revert to brown.  What do you think?  Is lawn paint a reasonable option for public spaces?  And does it make sense for use by homeowners?

I'm linking to the garden bloggers' Q&A hosted by Ricki at sprig to twig.

Email ThisBlogThis!Share to TwitterShare to FacebookShare to Pinterest
Labels: lawn