In a Vase on Monday: The 'Warrior' Steps Aside

Walking through the garden, the only flowers that leaped out at me as prospects for this week's "In a Vase on Monday" post were those on my Plectranthus ciliatus 'Zulu Warrior'.  It isn't the only plant flowering in my garden but it's the only one just beginning it's seasonal bloom cycle.  I thought I'd add a few stems of Eustoma grandiflorum 'Echo Blue' and be done with it but then I noticed one yellow rose and suddenly my vase came together.

After our temperatures soared again this past weekend, my yellow rose wasn't in perfect condition but it's still pretty and it has a delicious scent.  The blue and yellow Eustoma are also much smaller than they were during their earlier bloom cycle but, again, still pretty.  The Plectranthus took on a smaller role in the vase than I'd planned but it'll undoubtedly get exposure in one or more future vases.  My biggest problem was finding a place to put the completed vase.  Last week's succulent arrangements are still intact.

The dining table got a new vase last Thursday as I prepared for visitors on Friday.  Perhaps you can guess what I used as a centerpiece for that arrangement?


If you think that I've exhausted my supply of Eustoma grandiflorum 'Echo Pink' by now, you'd be wrong.

So the new vase ended up on the mantle in the master bedroom. 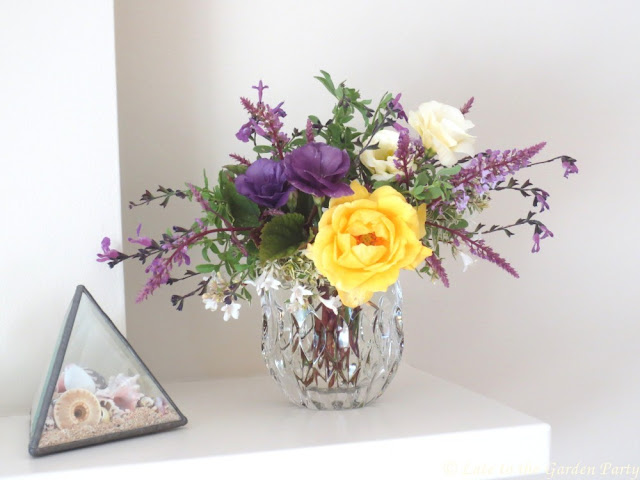 For more vases created from materials participating gardeners have on hand, visit Cathy at Rambling in the Garden, the host of this popular "In a Vase on Monday" meme.