Working out in the garden one afternoon recently I caught sight of something I hadn't seen before: a flying creature, bigger than the average bee but smaller than a hummingbird.  I ran to get my camera, only half expecting to find it when I returned.  It was still there but moved from the Cuphea to the Leucophyllum when I got too close.


Irritated by me and my camera, it moved again, landing on the Hebe speciosa. 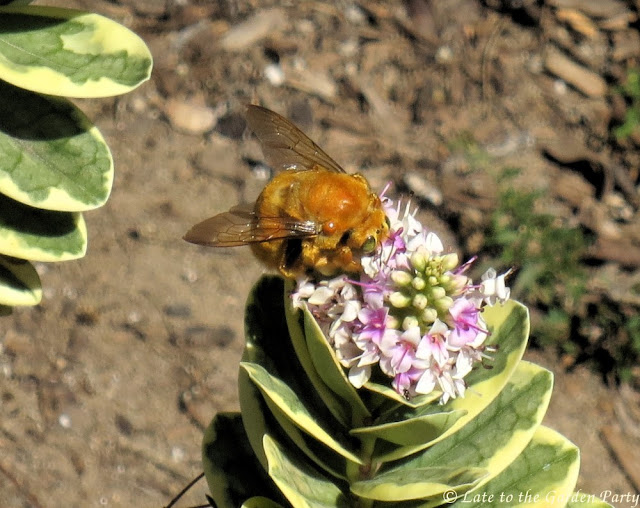 Its hum assured me it was a bee but I had no idea what kind.  The big green eyes and orange color helped me to identify it on-line.  It's a male Valley Carpenter bee (Xylocopa varipunta), one of the largest bees in the United States.  The male has no stinger but it can behave aggressively around its nest, trying to scare off visitors.  I haven't seen any sign of the smaller, black females in my garden or a nest, which the carpenter bees build by boring into trees.

Unlike me, my brother has no problem getting good pictures of bees (or other creatures).  You can find his "best of the bees" series on his blog, The Odd Sock, here.

Email ThisBlogThis!Share to TwitterShare to FacebookShare to Pinterest
Labels: bees