In a Vase on Monday: More Succulents!

We had another horrific heatwave all last week, or maybe it just felt horrific because we've had one too many of these events within the past 2 months.  After temperatures in the upper 90sF (35-37C), Sunday finally brought a little relief with a high of 88F (31C).  There were still pink Eustoma grandiflorum to be picked but even I'm getting tired of them, pretty as they may be, so I tried another succulent arrangement.


I clipped a wide assortment of succulents, many of which I can't identify.  I keep fairly good records of the plants I put in the garden but succulent sellers are notorious for offering plants without labels or, worse yet, with labels that say "Asst Succulents."  The sheer number of hybrids on the market probably contributes to the confusion.


I put the arrangement together using the same technique I showed in my prior succulent vase post (which you can view here), although I wired only those cuttings with short stems and/or particularly heavy heads.  The vase's basin is dry.  Like my prior arrangement, this one looks different from each side.  I placed it on the dining table where it can be viewed from all angles. 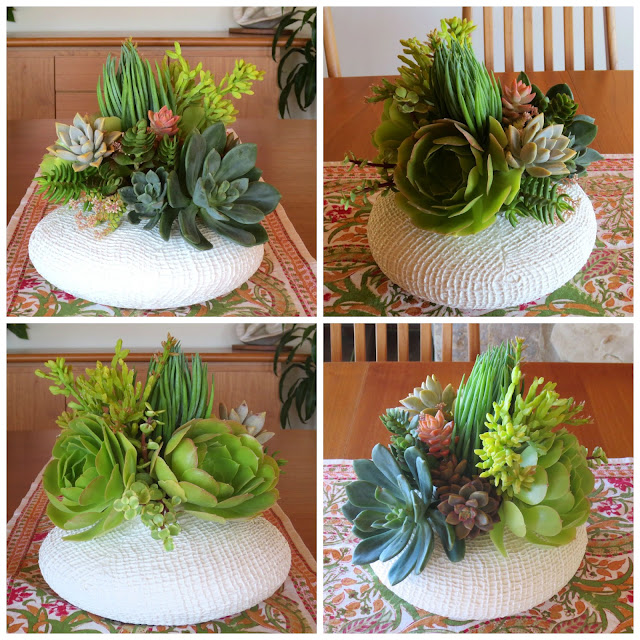 As it turned out, I'd clipped succulents I didn't use in this arrangement so I put together a bouquet of leftovers, using my onyx vase.


The stone vase is currently sitting in the front entryway.

The succulent arrangement I created 2 weeks ago didn't look too bad but some of the plant cuttings were a little frayed about the edges and, as I needed the white vase, I took it apart.

About two-thirds of the cuttings were tucked into the garden.  I tossed cuttings of the Oscularia deltoides and Aeonium arboreum as I already have enough of both to start a small nursery.

Visit Cathy at Rambling in the Garden, the host of the "In a Vase on Monday" meme, to see what she and other gardeners have put together this week.