Foliage Follow-up: Stars that get no respect

For this month's Foliage Follow-up, I found myself focusing on plants that don't get the respect they deserve.  They're not new and they're not flashy but they require little to no care to look good, which counts for a lot.

While working in my front garden, my eye was repeatedly drawn to the hedge that lines the right side of our house under the shade of the Magnolia tree.  I inherited the Pittosporum tobira 'Variegatum' shrubs that make up the hedge.  They've been sheared in a box shape by gardeners, probably for a decade or more.  I've begun cutting out some of the dead growth in the center in an effort to revitalize them.  Trachelospermum jasminoides (aka Star Jasmine), another commonplace plant, grows at the base of the hedge.  I added Festuca 'Siskiyou Blue' in front of the Trachelospermum earlier this year when I realized that the grass was struggling in its former full sun setting.  The three plant species don't produce an exciting vignette but they provide a nice place to rest the eye. 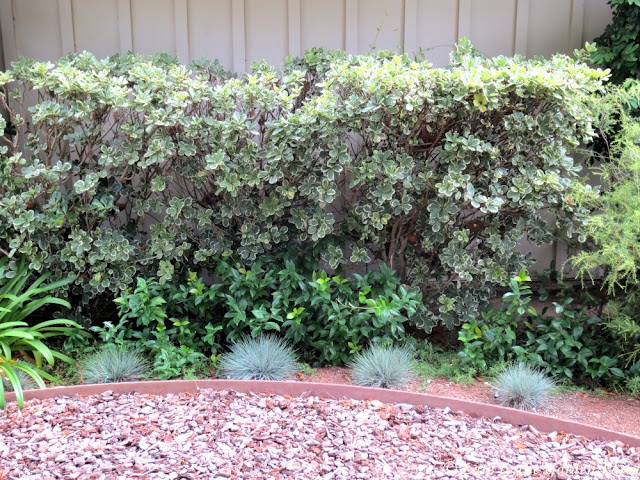 To the right of the hedge is a Duranta erecta I've featured before.  It was sold to me as 'Gold Mound' but as it's easily 4 feet tall, it doesn't fit the specs for that plant.  Whatever form of Duranta it is, its bright chartreuse color grabs attention without overwhelming its neighbors. 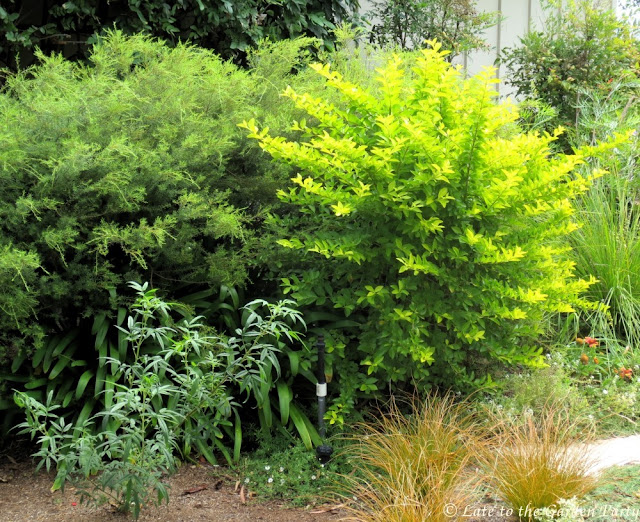 Another plant I've come to admire is Senecio vitalis 'Serpent'.  A friend gave me a clump of this succulent plant soon after I moved in.  I stuck it into the ground, like the Aeonium arboreum she also gave me, and the plant thrived with almost no attention.  Every once in awhile, I cut off a piece and stick it somewhere else.  It never complains. 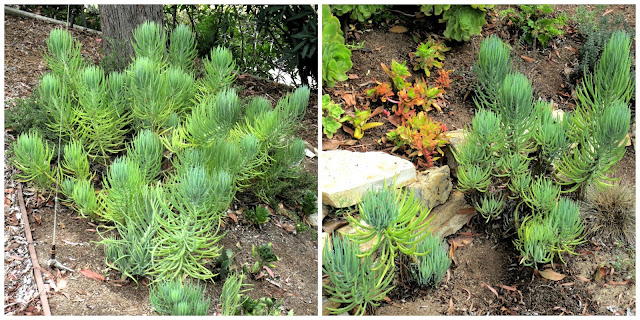 And, speaking of Aeonium arboreum, I planted some of it in a hanging planter a couple of months ago.  The entire planter was filled with bits and pieces of succulents collected from other areas of the garden.  I recently added a Crassula coccinea 'Campfire' as its centerpiece.  For a planter constructed mostly of leftovers, I think it's looking pretty good too. 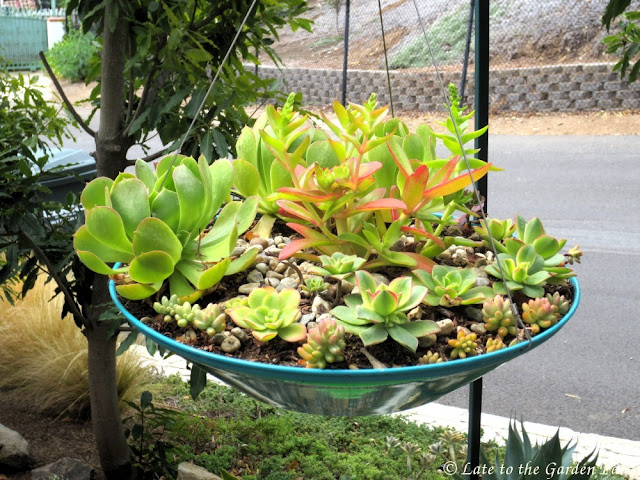 Foliage follow-up is the brainchild of Pam at Digging.  Visit her to see what foliage is catching her eye and that of other gardeners this month.