Visit to the Getty Center

My husband, mother-in-law and I took a half-day this week to visit the Getty Center in Los Angeles.  I hadn't been there in about 2 years and, on the last occasion, the central garden was looking pretty shabby.  The garden subsequently closed for a time to undergo a major clean-up.  It reopened several months ago but this was the first opportunity we had to spend some time there.

I have to confess that the garden didn't strike me with the awe it inspired during my first visits in its early years but that may be because it hasn't reached the peak of bloom yet.  Most of the roses weren't in bloom and many of the foliage plants were just coming out of dormancy.  The gale force winds we experienced earlier in the week probably didn't help either.  Those disclaimers aside, it's still a fabulous garden.

We started at the top of the stream garden.


At the end of the stream garden are the famous Bougainvillea "trees."


The main section of the central garden overlooks a sculpted Azalea hedge, which people seem to either love or hate.  It had very few blooms at the time of our visit. 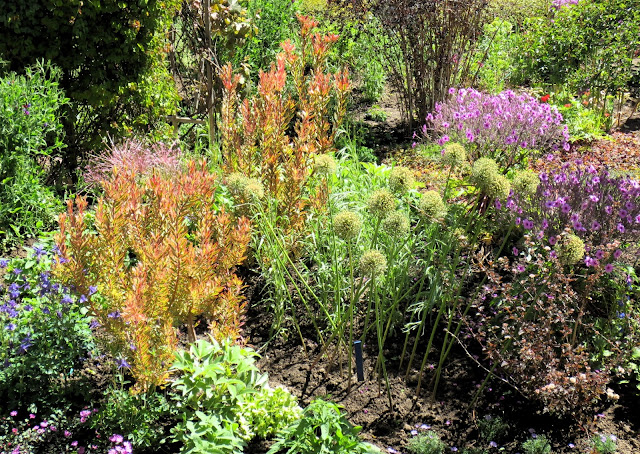 My identification of the plants shown above was aided by the Getty garden guide I purchased during my one of my earlier visits in 2003 or 2004.  Many of the plants listed in the original guide appear to be missing from the current garden - some are perhaps still dormant but I think some have been removed entirely.

The Getty Center also has a large cactus garden. 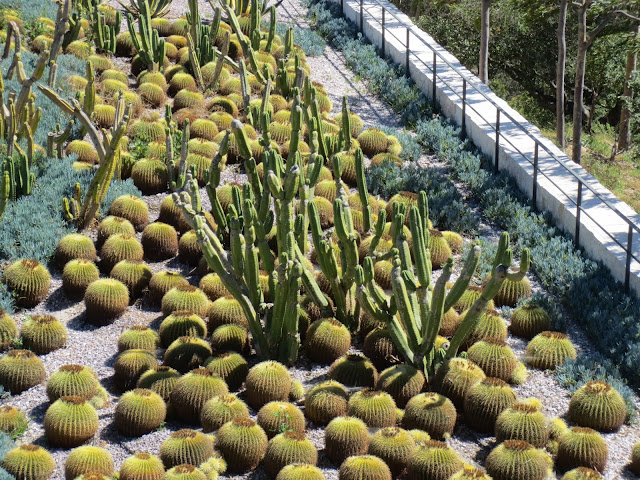 The view of the city from the cactus garden area is tremendous.


My main reason for going to the Getty is always the garden but there's a lot more there.  In addition to the museum's permanent collections of art and sculpture, there are always new pieces and new exhibitions.  We came across this interesting sculpture by Rene Magritte on loan to the Getty.


As much as we liked our tour of the gardens and the grounds, we also enjoyed a new exhibit entitled "Overdrive: LA Constructs the Future, 1940-1990."  It was a multi-media exhibition, including photos, videos, oral histories, and architectural renderings and models, which shows the explosive growth and transformation of Los Angeles County over 5 decades.  A graphic depiction of the spread of the population, the formation of new cities, the creation of freeways (after the demise of a once impressive electric rail system), and the development of the water transportation system was particularly interesting.  You can find more information on this exhibit, including some of the videos that make up the exhibit here.  It's worth a visit even if you're not an Angeleno.

Posted by Kris Peterson at 8:46 PM