Years ago, after he retired, my stepfather took up needlework.  I have no idea why.  Maybe just to keep busy, maybe as something to share with my mother.  In any case, he embroidered a picture for me that's hung in one spot or another of our house for 15 or 20 years.  It features 3 children looking down at a weed/flower. 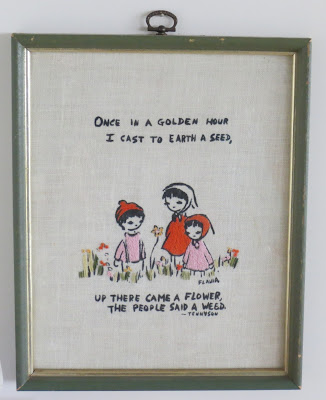 It's often said that a weed is just a plant that's growing in the wrong place.  It's also usually a vigorous plant that spreads with abandon.  Like plants characterized as "invasive," weeds can choke out other plants but I find that the most successful weeds are sneaky.  Some discretely fit themselves in between other plants.  Some have seedlings that resemble the plants they're growing near, making them harder to detect and less likely to be pulled out during their infancy.  And some simply hide behind their pretty flowers, making one hesitate about pulling them out at all.

I have quite a few pretty weeds and now, in spring, they're making their presence known.  When we moved into this house, I found Santa Barbara daisy everywhere.  It had grown over a foot tall in many places and was literally smothering some plants.  I can't say I have it under control yet and, at this time of year in particular, I realize that I probably couldn't eradicate it if I tried.  I'm hoping to achieve peaceful coexistence (someday).


I love true geraniums and have introduced them in my new garden just as I did in my last one.  However, I didn't plant the Geranium incanum that pops up everywhere here.  I cleared entire beds of this plant when we moved in but it has reappeared all over.  Its foliage is distinctive, which makes it easier to detect than other weeds.  I pull it out of most of my beds when I see it but, when it blooms, I cave in and let it stay in some places, especially areas of my dry garden beds where I've had difficulty establishing groundcovers.  I know I may regret my complacence but you have to admit that both the flower and the foliage are pretty.

I didn't introduce the Centranthus ruber growing on the property either.  I like the flowers, especially the white variety, but I admit that the prolific reseeding of this plant is driving me crazy.  Every time I see the plant for sale at a nursery I shudder.


I allowed Centranthus ruber to take hold in the bed running along my slope when the area was empty.  Now I'm faced with pulling out seedlings that are encroaching upon plants I purchased to fill the area.


I'm afraid that I was responsible for introducing Oenothera along the slope.  I'd heard it was aggressive but I had no idea just how aggressive.  I thinned the plants shown below a couple of times but I clearly should have done that a dozen or more times.  As my knee takes a beating when I spend a lot of time going up and down the slope, I'm either going to need to accept this plant or recruit a crew of helpers to spend a week with me pulling it out.


I'd never seen this Lobelia before I moved into our current house.  It's pretty but also difficult to eradicate.  I managed to get most of it out of one bed but I've left a relatively small clump in an area where it's hard to grow anything else.  So far, it appears to be behaving itself rather well there.


You probably recognize this next plant as mint, spearmint to be precise.  I know better than to plant this in the ground but the previous owner of this property didn't.  He filled one of the 3 raised planters in the vegetable garden area with it.  I spent an entire week trying to dig it out when we first moved in but I have no illusions that I'll ever be successful in eliminating it altogether unless I take out the raised planter itself (and maybe not even then).  The mint here is actually growing through the wood in the lower section of the planter.


My last pretty weed is Alyssum.  I have planted this here and there from both seed and 6-packs but it also pops up in many places where I didn't plant it.  However, it's a cooperative weed.  It never overwhelms its neighbors and, unlike most of the others shown above, it's easy to pull out where it isn't wanted.


What pretty weeds do you have?