A friend and I made our annual road trip north to Carpinteria this weekend to visit 2 nurseries we like.  Carpinteria is mid-way between Ventura and Santa Barbara.  It took me a little over an hour in light weekend traffic to get to my friend's house and, once there, we had close to a 90-minute drive to get to Carpinteria.  When we arrived it was nearly noon so I'm afraid my photos are sun-bleached.

Our first stop was Seaside Nursery.  This is a no frills nursery focused on California-friendly plants.  A large portion of the property is dedicated to demonstration gardens, segmented into sections focusing on California natives, succulents, South African plants, Mediterranean plants, Australian plants, and Asian plants.


There was a lot in bloom in the succulent garden as well. 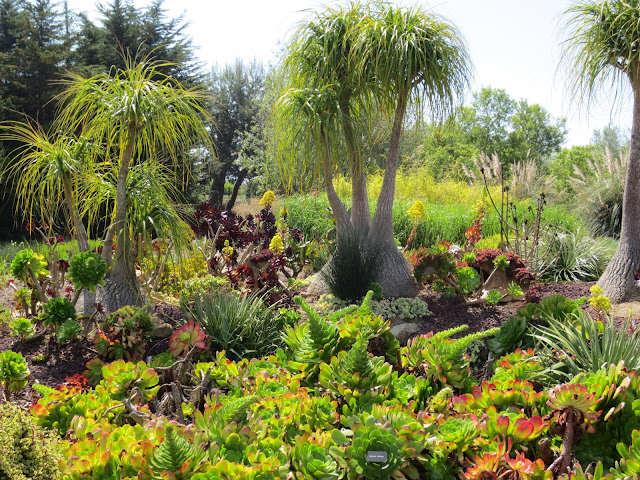 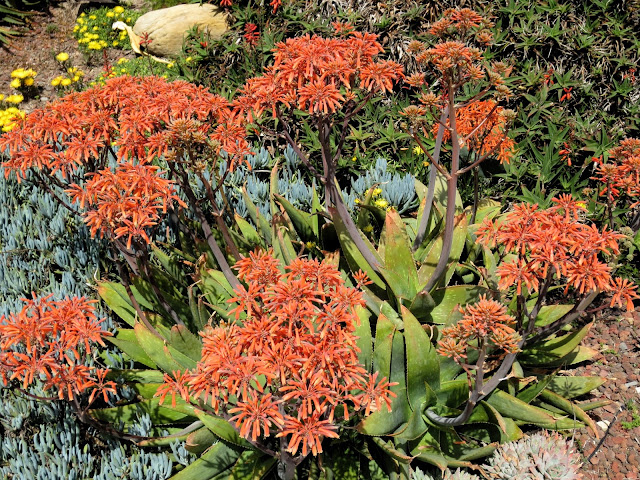 The Asian section was subdued, as one might expect.  The last time we visited the water lilies were in full bloom but we were too early for that this time. 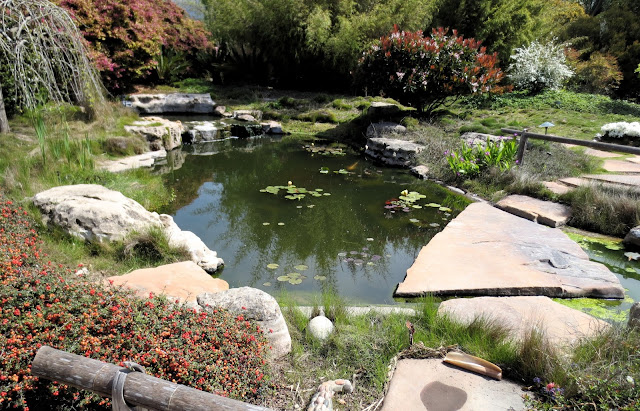 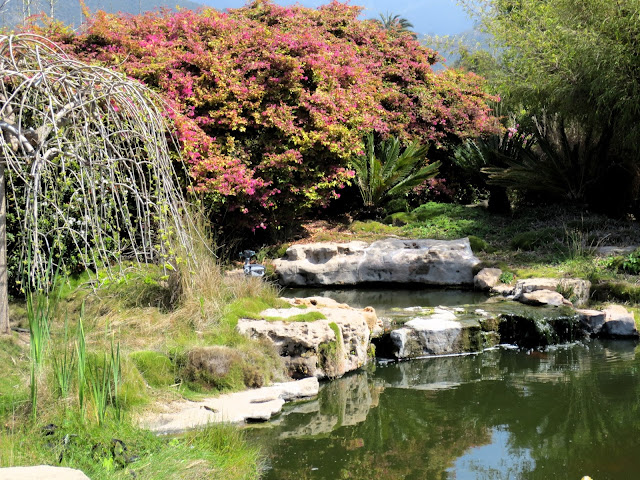 There were several metal goats munching on plants in front of the main nursery.


After we finished our rounds of the demonstration gardens, we toured the nursery area.  My friend didn't buy anything.  I didn't need anything but that seldom stops me from buying plants.  Among other things, I picked up several succulents (all, sadly, unlabeled), a California native bush lupine (Lupinus chamissionis, shown backing the poppies in the 2nd picture of this post), and some coyote mint (Monardella villosa).

After a lunch break, we went on down the road to Island View Nursery.  This nursery has changed its focus within the last couple of years.  It formerly offered a wide range of both outdoor and indoor plants but the stock of landscape plants has been dramatically reduced and the open area previously used to display shrubs and perennials is now used to display stone.  The nursery still has giant metal sculptures on display, though.


The nursery's focus now clearly appears to be on its indoor plant selections.


Although the selection was vast, few prices were posted and, if there were any baskets or carts to carry a shopper's selections, I couldn't find them.  I'm not sure who they're catering to but the nursery  wasn't set up for the casual shopper.  Nonetheless, I did manage to pick up a few more succulents and a couple of ferns.

We stopped at Sperling Nursery in Calabasas on our way home, one of my favorite haunts.  I didn't take any pictures there but I've posted some before, which you can see here.  I really didn't need any more plants but I still picked up 2 succulents.  Hey, I had a 20% off coupon I couldn't just let expire!
Posted by Kris Peterson at 11:01 AM