Spring decorates the garden with beautiful blooms and adds an auditory accompaniment of birdsong.    On a less pleasant note, it also marks the return of some ugly garden visitors: sap-sucking and plant-chomping bugs.  The aphids showed up first, following what was probably the last rain of our short wet season.  I wasn't paying sufficient attention to the garden at that point and they infested the buds of my climbing rose before I realized they'd arrived.  A good hosing wasn't enough to take care of the problem and I had to resort to cutting back the worst of the damage and giving the shrub a dousing of insecticidal soap.


The grasshoppers showed up next.  I don't recall seeing them this early in the season before.  I found evidence that something was munching my new Stevia plant before I noticed the culprit himself.

The bugs shown in the pictures above are stand-ins for the ones I found in my garden.  My brother, a much better photographer than I'll ever be, provided the photos.  He also provided the picture below, constructed with the assistance of software using other pictures he'd taken, in an effort to reconstruct an epic battle he says he witnessed between a swallow and a grasshopper. 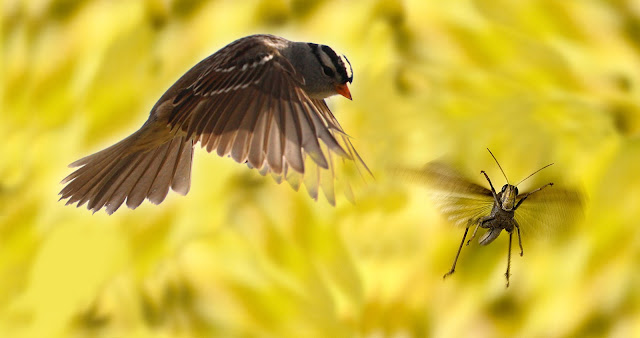 How I wish I could train the birds in my yard to hunt grasshoppers!  That's not to say that the birds in my garden don't earn the seed I provide for them.  They spend a lot of time poking around in the garden beds and lawn.


However, some birds spend more time primping than hunting.

Other than the bees, I've yet to see many good bugs in my garden.


The ladybug pictured at the top of this post was found in a garden my brother visited some 50 miles from me.  I haven't seen any butterflies yet either, although my brother has.


All insect pictures were provided courtesy of ericnp.net.
Posted by Kris Peterson at 4:25 PM