Another Kind of Garden Tour

Last week I participated in a tour of 3 gardens located on the Palos Verdes Peninsula, which I wrote about here.  All of those gardens were large, created with the assistance of landscaping professionals, and 2 of the 3 required the ongoing support of professionals to maintain.

On Saturday, April 20th, a friend and I toured gardens of a very different type in the community of Mar Vista, located on the west side of Los Angeles.  Modest, bungalow styles houses dating back to the 1920s-1940s are still common there, although the area has been undergoing gentrification for some time and angular modern style homes now sit side by side with the older bungalow homes on many streets.

Mar Vista has sponsored sustainable, California-friendly landscaping for several years, using its annual Green Garden Showcase to promote interest within the local community.  This year's showcase featured 98 gardens open to the public.  My friend and I, although ambitious, had no illusions about trying to see all of these.  Last year, we toured about 6.  This year, we set our goal at 12.

Touring 12 gardens in a single day is easier than you might expect.  Many, if not most, of the gardens show only their front yards and, many times, featured gardens were on the same street.  The vast majority of homeowners participating in the showcase have removed their lawns, although this year I saw more artificial grass than last year.  The use of succulents and other drought tolerant plants is also common, as shown below. 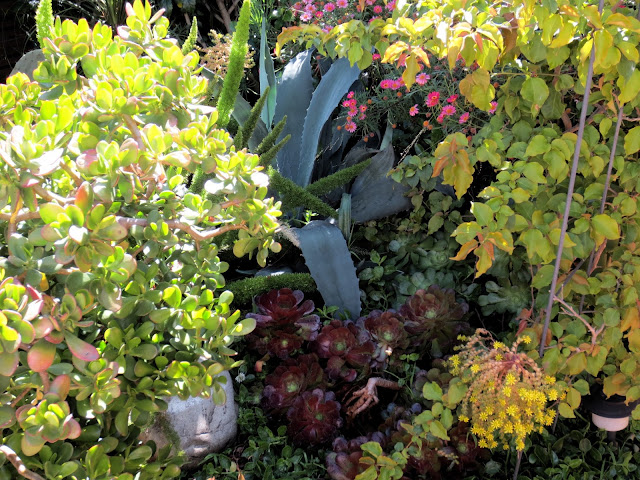 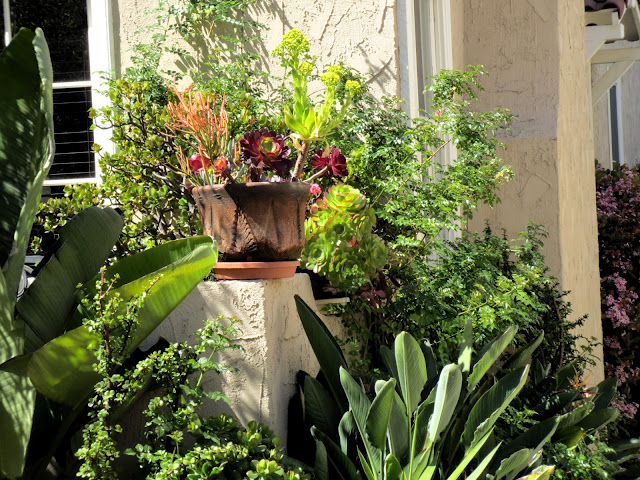 The plants in this garden were all healthy and obviously robust but I'm afraid the garden itself made me feel claustrophobic.  I had a similar reaction to the second garden we visited.  Although the large agaves were impressive, they also felt a bit intimidating placed close to the entry way and along the public walkway. 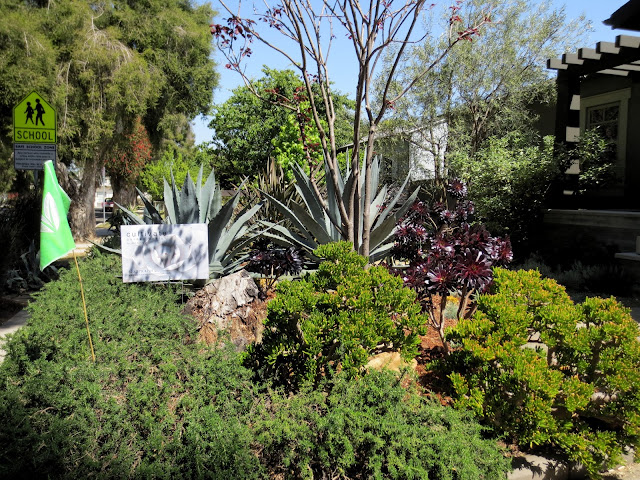 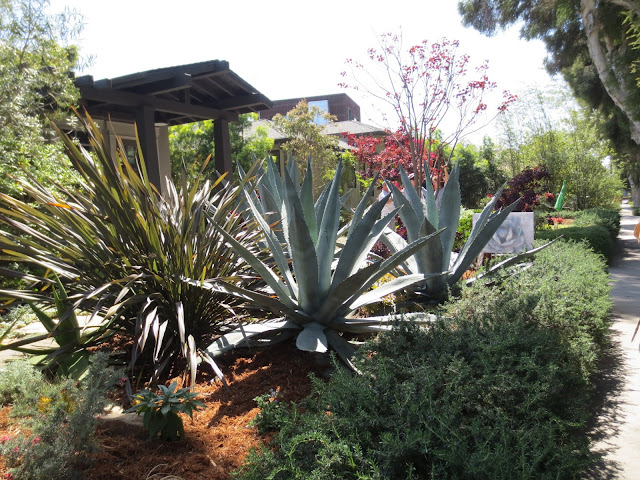 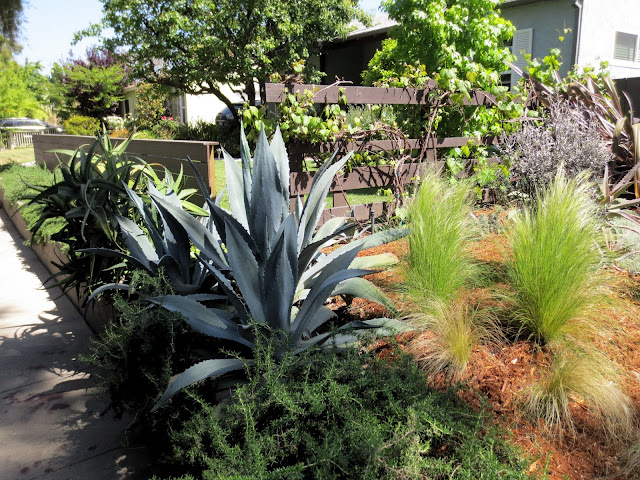 The garden shown above and the next one, located across the street, were designed by the same person and used similar plants; however, I liked the one pictured below better.  It had a more open feel. 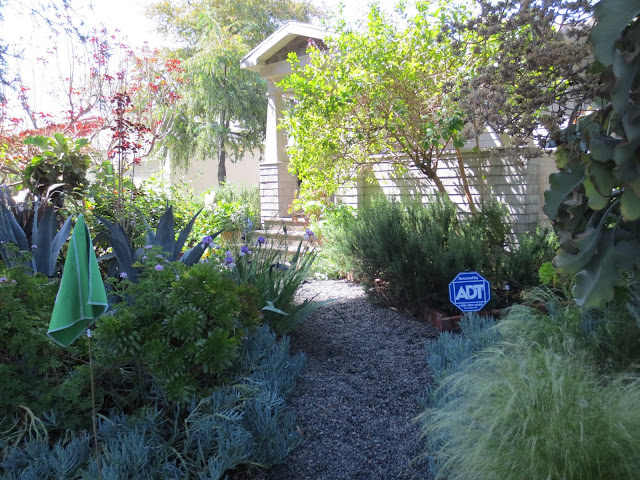 The homeowner at the next garden told us that she had put her front garden together entirely from cuttings from a few plants.  In talking to her, we also learned that she had attended the same high school we had in the San Fernando Valley so we enjoyed a brief trip down memory lane. 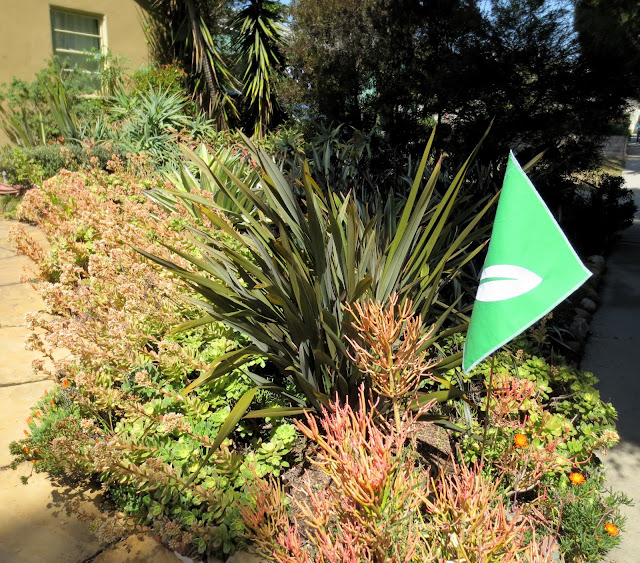 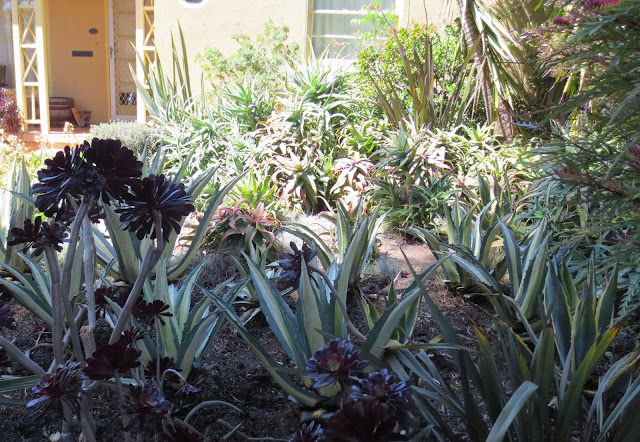 The next homeowner we spoke to was very into feng-shui and her garden was constructed in support of those principles.  She and her husband also raise chickens.  I asked if that bothered her neighbors at all.  She told me that a lot of the neighbors in the surrounding blocks have chickens and no one complains.  There's a general "no roosters" rule.  I asked if the chickens had names and she said they're called Original, Extra Crispy and Nugget.


The homeowner at the next site was unavailable but her friend, who turned out to be the horticulturist on HGTV's "Outdoor Room" show, showed us around.  This garden uses a gray water system.  I wasn't thrilled with the front but I liked the lounge area in the back. 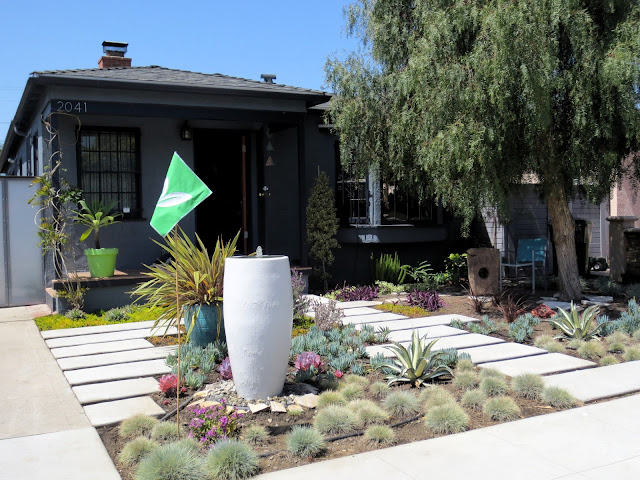 The next garden, with ponds and waterfalls in both the front yard and the back, was essentially an advertisement for the owner's pond installation business.  There was a lot of greenery but the plants were placed in a hodge-podge fashion (and there were fake orchids placed throughout).

The next 2 gardens were designed by the same landscaper and, like the matched pair we'd seen earlier in the day, these also utilized a lot of the same plants.  The front yards in these 2 gardens were deeper than many of those we saw on the tour, which made them feel more open.

Those are all the pictures I took of the gardens we visited on the official tour.  (We just drove by a few.)  Frankly, by comparison to last year's tour, I was disappointed.  Perhaps my friend and I just made poor selections from the list of 98 featured gardens but I didn't come away with a lot of ideas about plant combinations and design ideas to try as I did last year.  Actually, I thought some of the houses we passed that weren't on the tour had more attractive front gardens.  Most of those that attracted my attention used simpler plant palettes.


I probably need to give some thought to what I liked and didn't like in the gardens depicted above and apply those lessons to my own front yard!  I tend to crowd a wide variety of different plants together without giving as much thought as I should to the overall picture.