In a Vase on Monday: Strange bedfellows

Finding flowers to fill a vase (much less my usual two or three vases) has become more of a challenge with each passing week.  Only a handful of flower species are currently available in a bountiful supply but of course I try not to repeat myself.  As my Correa 'Pink Eyre' (aka Australian fuchsia) is dripping in blooms, I knew I wanted to use it again but I'd no idea what to pair with it until I tripped over two stems of pink Alstroemeria blooming off-season while doing some pruning.  Unfortunately, one of those stems was no longer vase-worthy when I went to pick them yesterday morning and the second one started to collapse as I began putting my arrangement together so some shuffling was required.

After cutting one orchid, I decided why not cut another one while I was at it, especially as the orchid in question fit the color mix I'd already selected.

For more IAVOM creations, visit Cathy at Rambling in the Garden who leads this weekly parade. 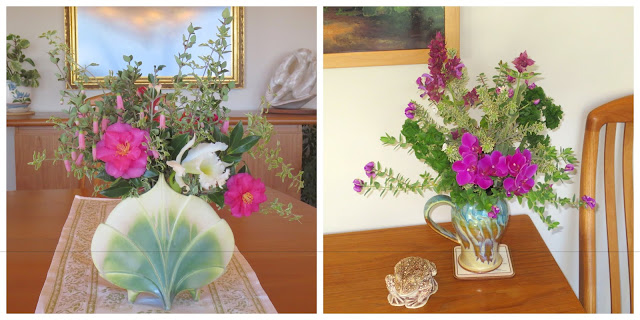