In a Vase on Monday: The last dance

As "In a Vase on Monday" arrived on the heels of "Garden Bloggers' Bloom Day" this week,  I hadn't planned to put together more than one vase but I expect you won't be surprised to learn I've got two.  Really, the garden dictates these things and I just follow its directions.  The title of today's post comes from the fact that the focal flowers in both vases are the last of their kind for the season.

The first vase was inspired by Dahlia 'Rancho', which produced its first and only bloom last week.  I've dug up and stored all my other dahlia tubers and in that 'Rancho' gave me just a single bloom during the six month period it occupied space in my cutting garden, I won't be saving this tuber.  One bloom wouldn't make an arrangement on its own so I drew on more reliable flowers to flesh this one out.

The inspiration for the second vase was actually the flowers of Salvia discolor I didn't manage to photograph for Bloom Day but the arrangement fits the "last dance" theme as it also includes what I think is the last flowering stem of Lisianthus (Eustoma grandiflorum) I'll have until spring.

Last week's arrangements held up well.  That was perhaps to be expected in the case of the flower-less arrangement featuring succulents and Leucadendron stems but it was surprising in the case of the second vase.  I down-sized the contents of that arrangement, tossing out the pink Lisianthus that had already seen better days when I cut the stems last week, but retaining much of the rest. 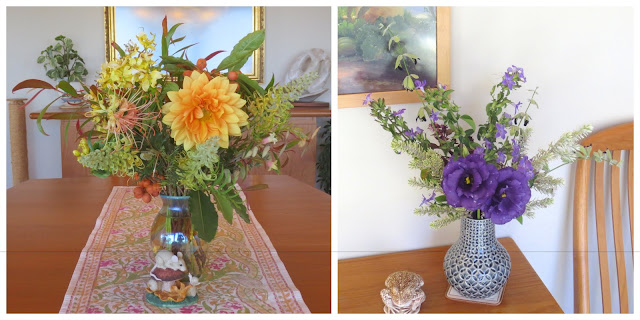