In a Vase on Monday: We've Reached the End of the Labyrinth

Last week was very warm, dry, and windy and the dahlias still left in my cutting garden looked the worse for it by Sunday morning.  I'm calling this the end of the season for the dahlias (with the exception of 'Rancho' which has yet to open its first buds).  I also pulled the remaining zinnias, which like the dahlias were too badly mildewed to bear any longer.  I'm sorry to see them go as a flower-filled cutting garden simplified the weekly process of creating arrangements for "In a Vase on Monday," even if the arrangements themselves became a bit repetitive.

So here's the last of Dahlia 'Labyrinth', offered once again in a starring role.

Although Dahlia 'Gitts Crazy' had an all-too-brief moment in the spotlight, I'm calling an end to its run as well.  It's possible it could produce a few more blooms before the weather gets cold here (if that ever happens!) but its once pristine foliage is too ugly to tolerate.

The vases containing the dahlias found places where they could be admired for as long as they last. 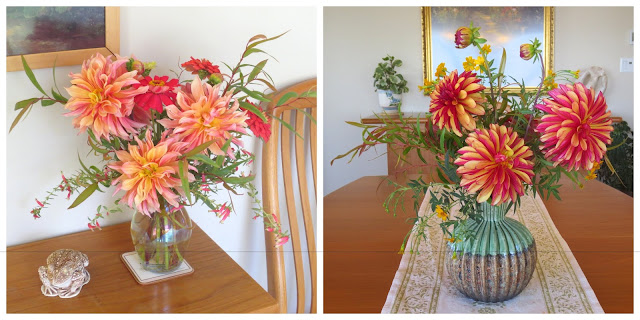 I couldn't leave the kitchen island empty so I cut a few bush violet stems again this week for a small vase.