In a Vase on Monday: 7th Anniversary Challenge

Cathy of Rambling in the Garden is celebrating the seventh anniversary of the popular "In a Vase on Monday" meme.  I didn't come on board until late March 2014 but I haven't missed many Monday posts since.  As a challenge, Cathy suggested that participants create an arrangement without flowers this week.  That takes a measure of restraint from a flower freak like me but I did come up with something to meet the spec.

The volume of flowers available in my garden took a nose dive once I dug up my dahlias and zinnias so flowers will be in shorter supply for some time but there are still some and I decided to use the last respectable pink Lisianthus (Eustoma grandiflorum) and stems of Correa 'Pink Eyre', currently blooming with abandon, for a second vase with flowers.  If you've read many of my prior IAVOM posts, you already know that I seldom stop at just one.

Last week was a mix of emotional ups and downs.  On the down-side, I received news of a serious illness within my extended family; however, the week also delivered rain (just 0.18/inch but that's something!) and the long-awaited news that we have a new US President-elect.  With respect to the latter, there are still legal steps that need to be completed before the decision of the voters is certified but there's a very high statistical probability that will happen even if the current incumbent doesn't have the grace to acknowledge it for the sake of his party or the nation.

For more IAVOM posts, visit Cathy at Rambling in the Garden.  Many thanks to her for creating and nurturing what has become a wonderful weekly celebration. 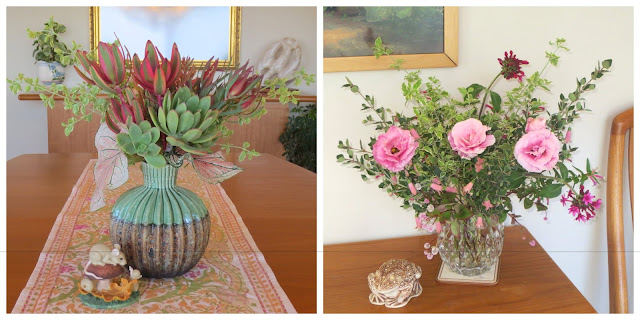